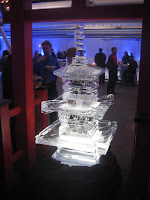 Google Christmas parties for the larger offices are famous for being absolutely amazing, and over the top fun.  My entire career I have worked from smaller offices, and whileI have been to some awesome Christmas parties, due to economies of scale they have never been able to compete with the reputation of the larger office parties. Friday night I attended the Site Reliability Engineering (SRE) Christmas Party that was held a the Computer History Museum and it was legen.. (wait for it)... dary! 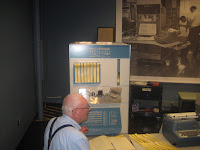 This was the most over the top Christmas party I have ever been too.  They really took advantage of the location to step up the affair to a high level of geekdom.

When we first arrived we wandered into a room where we were given Christmas Carol song sheets, and we sang carols while an old computer called a PDP1 played the music. The PDP1 is from the early 60s and each song was fed into the computer via paper tape.

We were also given a demonstration of the Charles Babbage Difference Engine, one of the worlds first designs for a mechanical calculating machine and a precursor to modern computers.

Some of the other awesome features of the party were:


The highlight of the party for me was the musical entertainment - the Spazmatics.  They are an 80s cover rock band with a nerdy flair.  I caught a couple of their sets, and they were amazingly good.  Hit after hit of the best tunes the 70s and 80s had to offer: They had your Clashes, your AC/DCs, your Bons and your Jovis.  They even mocked Celine.  Who could ask for more?  I boogied.  Boogieing is good (well, good for me, not necessarily good for those watching me).

We also were told what our party swag was going to be, but since they are still making them I am going to keep it a surprise for now.  Watch this blog for updates.  It will be enlightening.
Posted by Dave DeBaeremaeker at 12:46 AM

Uncle G knows how to throw a killer shindig :)