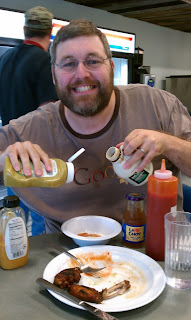 
My first experiment was to go whole hog and mix maple syrup, duck sauce, hot mustard and Texas Pete together, then spread it on a wing.  It was definitely flavourful, but it was too many competing flavours all at once.  Mainly the duck sauce overpowered everything else.
Experiment two proved to be a winner:  equal parts maple syrup and Texas Pete.  It was wonderful - a heavenly blend of sweet and heat.  All it really needed was a thickening agent (perhaps butter).  Otherwise it was about as awesome as awesome gets, which is good as I only had 5 chicken wings and was running out things to experiment with.
Since the maple syrup was imported from Canada, which means odds are it is from Quebec (they make 75% of the worlds maple syrup supply) I dubbed this delicious concoction the "Texas Pierre", tho Michael preferred "Maple Pete".
I highly recommended you try it on your next chicken wing.
Posted by Dave DeBaeremaeker at 1:36 PM

You simultaneously crack me up and inspire me.

(P.S. Ever have Crepe Temptations maple syrup? They are on my street.. just saying :>)