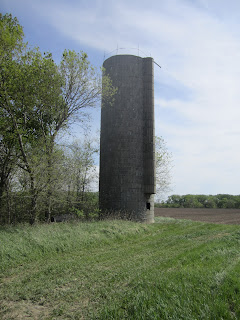 May 4th and 5th.  We, my wife, kid, dog, and myself, are on the return leg of an epic adventure.  We have explored the wild west of America, and now we are on our way home.

The last two days brought us from the middle of Kansas, across 3 state lines, one 4 times.  We also, at some point in time, crossed the 100th meridian, where the great plains begin (well in our case, stop)

We started this leg in Salina Kansas and headed east.  Along the way we pulled off the interstate and drove by the Dwight D Eisenhower Presidential Library (our second Presidential library of the trip).  We then decided to check out the country side, so we headed out on some dusty dirt roads to check out the farmland (and to grab some caches).  I got Kansas all over my car (its still there!) 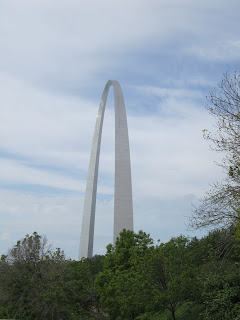 We ate lunch in Kansas City, and then drove most of the way across Missouri, and stayed in O'Fallon MO, just to the west of St. Louis.  This stretch was one of the least interesting stretches of our trip.

The next day we headed into St. Louis to check out the infamous St. Louis Arch.  It is exactly what it pretends to be - a giant arch.  It is supposed to symbolize the expansion of America to the west (think Louis & Clark etc.) but I think it means that St. Louis is trying to compensate for something.

After the arch we went to find the first cache of the day, which was at a really interesting metal sculpture of a jazz band. 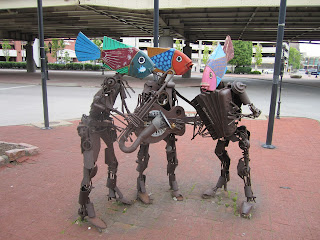 After St. Louis we crossed then Missouri River and headed across Illinois, then into Indiana.  We barely grazed the southern half of these states so there isn't a lot to say about them.  We didn't really stop except to get caches so I can check the states off my list.

We did get to see a lot of the flooding that has been happening in that part of the world.  Mile after mile of farmers fields covered in 4-6ft of water.  It was rather dramatic, and mildly depressing.

Indiana had an interesting cache that I wanted to get.  It is called "Kentuckiana Jones And The Temple Of Doom"...  try being a cacher, read that title, and NOT want to get it... go ahead... try. 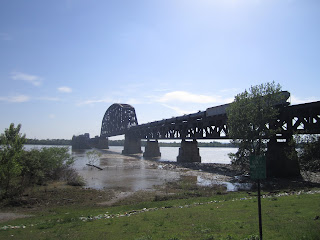 Done trying?  Yeah, me to. It is hunt time.   The issue was that to get to the cache I had to cross the Ohio river into Kentucky at Louisville KY, then cross back into Indiana - the cache is on the Indiana bank of the Ohio river.  The problem is that yours truly is, surprisingly (hopefully), bad at navigating city streets. When we got of the bridge from KY to IN I took a wrong turn and accidentally ended up on the bridge back to KY.  A turn around later and I re-crossed then river and ended up at the cache.   I crossed a timezone boundary with each crossing, so I am pretty sure, due to the paradoxes of time travel, that I aged 3 hours in those 15 minutes. 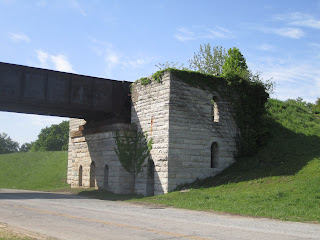 The cache itself was at an abandoned building that made up the support structure for a large train bridge that crossed the Ohio River.  If you are in the area I highly recommend doing this one.  One interesting thing that made it extra special was while I was hunting the cache I was up near the tracks as a train was going by.  One of the engineers on the train was leaning out the window and gave me a nod as he drove by - it was rather cool little scene.

After the cache we headed to Lexington KY to spend the night. The end.

Tomorrow is our last day on the road.  What adventures will it bring? Will we make it home?  Will we break down on the side of the road, give up on our current life and become a band of roaming gypsies with a music playing monkey?  Will I finally stop posting such long posts about things that happened  3 weeks ago? Will I stop asking rhetorical and silly questions?  yes.
Posted by Dave DeBaeremaeker at 6:00 PM