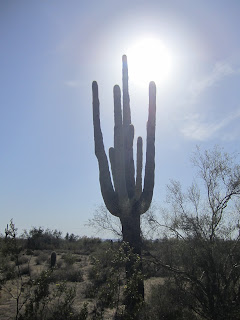 April 25, 2011.  My wife has a favourite website to buy "cool" baby stuff called Baby Half Off (babyhalfoff.com).  When she realized how close our trip would take us to their physical store we immediately added Phoenix to our list of places to visit.

I always wanted to see the giant Saguaro cactus in the wild, and the Phoenix area has them in spades.  I was always under the impression that such cacti were rare, so we were taken aback to find out that they grow in forests like pine trees grow in the east (for loose definitions of forests in deserts).

We spent the morning shopping for baby stuff, and for quilting stuff. It was exactly as exciting as it sounds.  Whoo. uh. Hoo?

We only had time to find 5 caches, but they were all awesome.  The first was a large 50 gallon container on the front porch of a house.  The second was at a waterfall by the water distribution plant.  The third was a key lock box in the back of an office building.  The fourth was at a view of a Medieval style castle in the hills overlooking Phoenix. 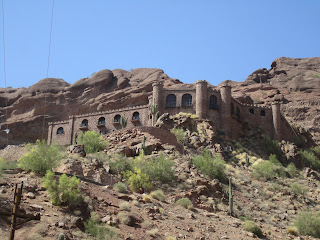 When we pulled up to the castle cache, an older gentleman pulled up behind us, and before we could say anything he mentioned in a gruff voice: "So you came all the way from North Carolina to block my driveway"... um... :)  Before too long we realized he was having fun with us and talked a bit about the castle.  Apparently for $900K I can make it my summer home... my wife sadly said no.  boo!

The last cache was the most spectacular cache I have ever seen.  The cache description simply mentioned that the cache is in an ecologically sensitive area, and care should be made.  Also that the geocaching logo is on the cache container, and finding that logo would make opening the cache obvious. 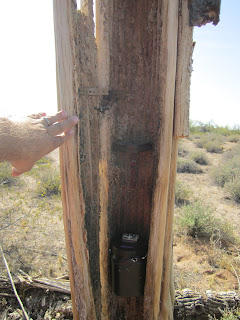 When I got to the cache coordinates I found a dead cactus, about 8 feet high, still standing.  I saw the small geocaching logo, and took a closer look.  I saw an eye-hook, which I opened, and the entire front of the cactus trunk opened up to reveal the cache container.  Yeah, its a cache container built out of a cactus. Friggin' awesome!  This, my friends, is what caching is all about.

An added bonus to the cactus cache was that it was in a field full of the seguaro cactus I wanted to see, so I was able to get some awesome photos.

After finding this cache we took the 1.5 hour drive back to Flagstaff.  We treated Bailey, our dog, to a trip to a local dog park to get some puppy-playing in.  Afterwards we hit the hotel and started getting ready for the next stage of our westward adventure.

What will tomorrow bring?  Stay tuned!
Posted by Dave DeBaeremaeker at 6:00 PM