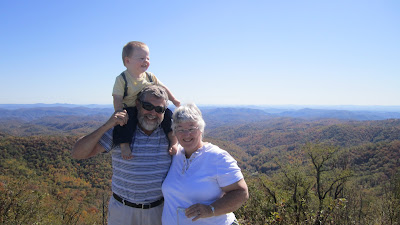 My parents have come to town to help celebrate my sons 2nd birthday. We spent yesterday on a whirl wind birthday party extravaganza.

Today was a more relaxed day.

Given the time of year and the proximity to the mountains, we decided to spend the afternoon touring the mountains, checking out the sights, and doing some leaf peeping.  We also did some geocaching.

In case you didn't know, leaf peeing is an autumn activity in areas where foliage changes colors.  Leaf peepers are those who participate in photographing and viewing the fall foliage.

Since this area is familiar turf for me, and our goal was sight seeing and not caching, we spent most of our time driving the Blue Ridge Parkway.  However caching came in handy once again.  A quick examination of the caches I hadn't found yet revealed State View, a cache that promised amazing views of North Carolina.  It was also out of the way of the incredibly busy overlooks that the tourists frequent. 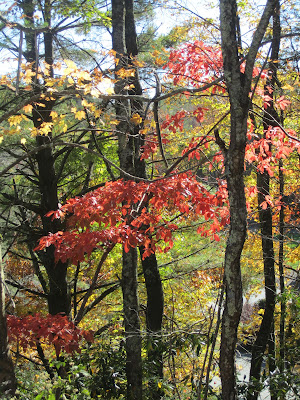 So off we went to find the cache. When we got to the coords we found ourselves at a park.  As promised we were treated to amazing views, and as expected there was no one else around (or so we thought).

As we started the hunt a woman came up to us to warn us about some unmarked metal stakes in the area, and to ask what we were up to.  We started talking to her and explained what geocaching is, and we found out that what we thought was a park was in fact a privately owned lot, and the owners were planning on building a house in the spring.

It became clear based on how the conversation went that the owner did not know about, or give prior permission for, the cache. I started going into diplomatic mode and started to explain that I would contact the owner to get permission, and the cache could be removed.  It quickly became apparent that the owners were completely cool with the cache being on their property, and were rather put out at the suggestion that it could be removed.  Cool muggles - awesome :)

The husband then came up and I showed him where the cache was located, and showed him the log sheet, and he was very interested in the whole thing.  Then he took his turn at "Show And Tell" and started pointing out features of the landscape we were standing on, and overlooking.  Some of the features are: 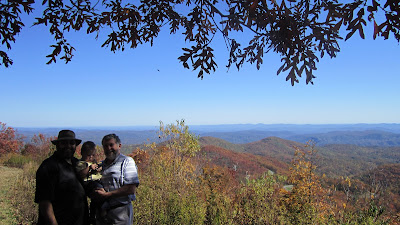 * The continental divide went right through the middle of his property.  Depending on where he puts his drain pipe for his house, he will drain into either the Atlantic or the Gulf Of Mexico.

*  We could see the skyline of Charlotte NC from this location on the horizon.  Using my GPS we determined that that the distance to Charlotte was approximately 76 miles.

* We could not see Winston-Salem NC due to the way the Appalachian foothills lie, but at dusk one can see the reflection of the sun off the windows of the buildings.

*  We could see both Virginia and South Carolina at the same time.

We spent a solid 30 minutes talking to the couple before we moved on.  It was, hands down, one of the more fascinating conversations I've had with someone while geocaching.

We spent the rest of the afternoon driving the Blue Ridge Parkway and checking out the fall colours, and dodging the tourists.  I'll end this blog with some more pictures I took on the drive, but before I go I want to leave cachers with two thoughts.  1) Always get adequate permission from the land owners before placing your caches, and 2) Don't be afraid to talk to muggles and let them know what you are doing - it may just lead to an amazing educational experience.

Posted by Dave DeBaeremaeker at 8:59 PM

Looks like a totally awesome day! family, new friends and geocaching. It always amazes me why folks don't get permission for a cache? This landowner could have added so much information to the cache just by what he showed to you. Oh well, we can't make excuses for our peers.
Great pictures and an excellent article outlining what seemed to by a fantastic day. Thanks for sharing!

Thank you for sharing such amazing pictures. I really need to make a trip east!