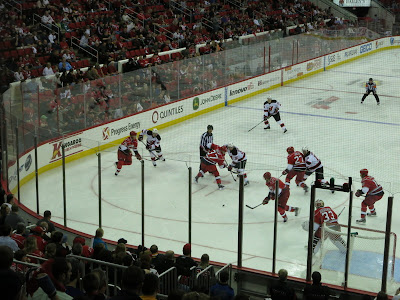 This may seem shocking to y'all, but yesterday this Canadian  attended his first NHL game ever.

I have seen many minor league games (in Ontario it is called the OHL), but never a pro game.  Toronto tickets are too expensive (most expensive in the league I am told), and they often sell out.   When some co-workers of mine mentioned they were heading to Raleigh NC to take in a game I was all over it like white on rice (how about cheese on grits? Gravy on poutine? Obama on health care?).

Raleigh is a good 3 hour drive from my house, so this adventure is not to be taken lightly, especially given the company of a toddler and a 34(ish) week pregnant lady.  We actually made it a two day affair, staying overnight at a hotel.  We got a friend to babysit Zeke at the hotel, and my wife and I headed to the PNC Arena to take in the game. 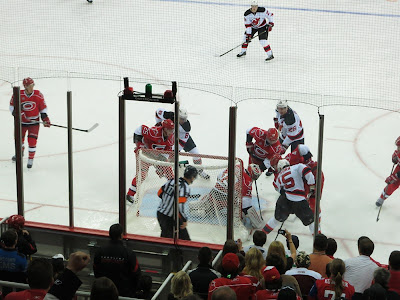 This adventure was not without some excitement however.  We arrived at the arena later that expected (involved a comedy of errors involving trading cars with the babysitter and the storage of tickets in glove boxes)  and we ended up parking in the cheap lots, so we had a good 15 minute walk to the gates.  When we arrived I noticed that pocket knives were banned from the arena, and I had, as always, my leatherman on my belt.  Given we had 5 minutes to face-off, and a 30 minute walk round trip to the car, I had to decide if I wanted to miss the first period, or lose the knife to security.

So what does a geocacher do when faced with such a situation? Yep, I "cached" it.

I stashed the leatherman in a potted plant, went through security, and arrived at my seat just in time to catch the singing of the National Anthem.  I fetched it when we got back out and placed it back in its proper place on my belt.  Worked like a charm. 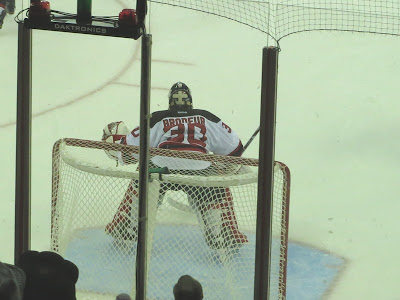 Now, about the game...  It was the New Jersey Devils vs the Carolina Hurricanes.  The score was an butt-whooping 5-0 for the Devils.

We had seats about half way up the first section, just behind the goalie. Really great for seeing the game, but kinda crappy for photos as the safety netting gets in the way.

Halfway through the second period my wife and I noticed that we recognized the name of the New Jersey goalie: Martin Brodeur. We remembered the name but couldn't place why.  A quick wikipedia search (being a geek has its perks) later and we realized why.  Brodeur has been a goalie for 19 years in the NHL, all of it spent with the Devils.  So we had hockey legend playing right in front of us.

I originally started the game cheered for the home team (since my team of choice  - Ottawa - was not playing, I picked the one that seemed to get me less beat up in the stands).  After a while I just started cheering that Brodeur would get the shutout.  Turns out he did, mostly due to my support, I am sure.

So our first game (it was my wife's first NHL game as well) was a rousing success.  Definitely a must-do-again item on our todo lists.  I'll leave you with a small selection of pictures (I took 265 in total) from the game.

Until next time,  keep your stick on the ice! 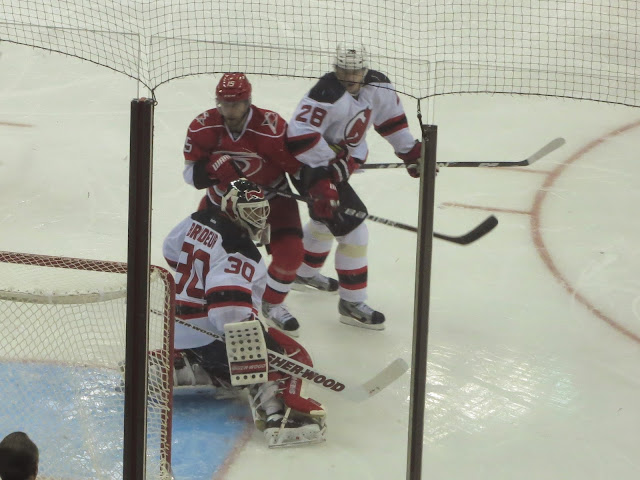 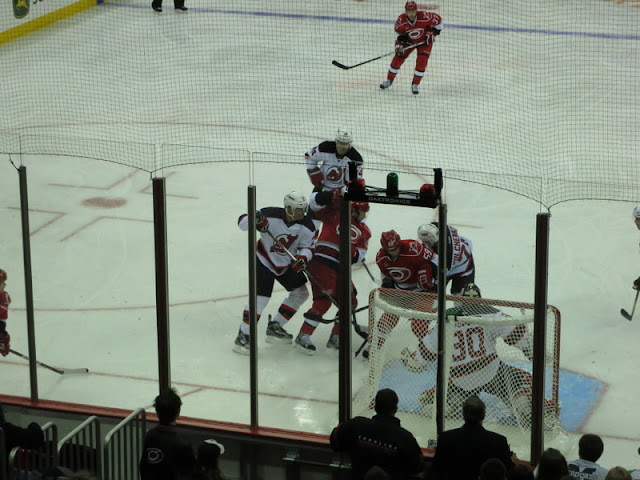 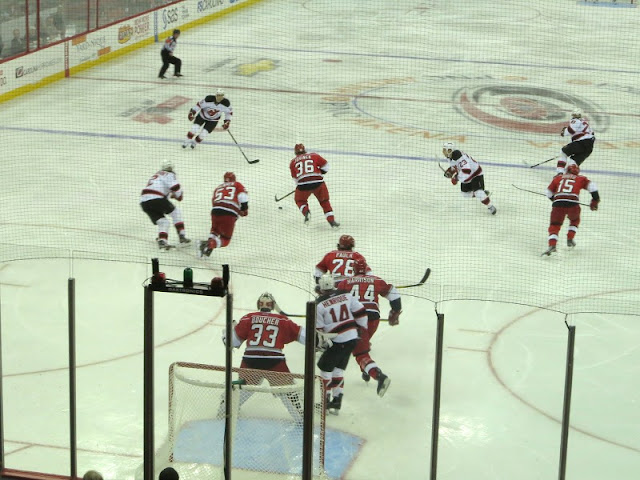 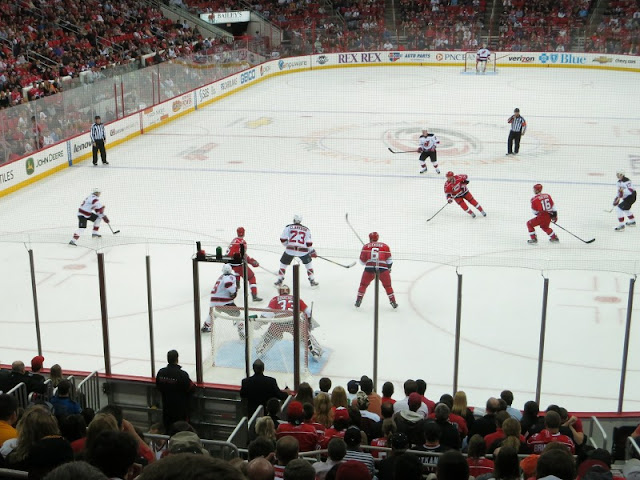 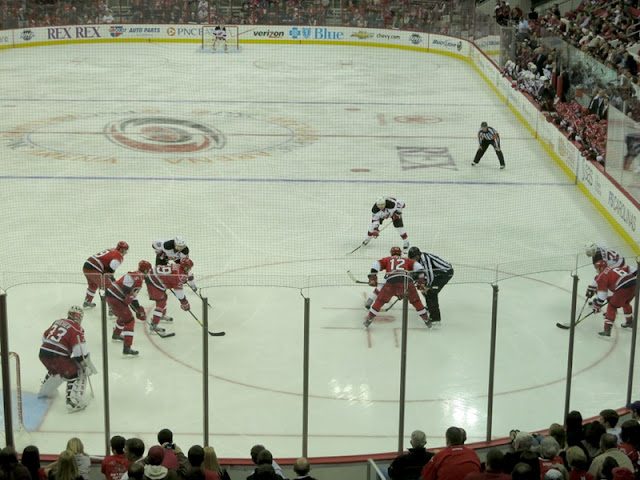 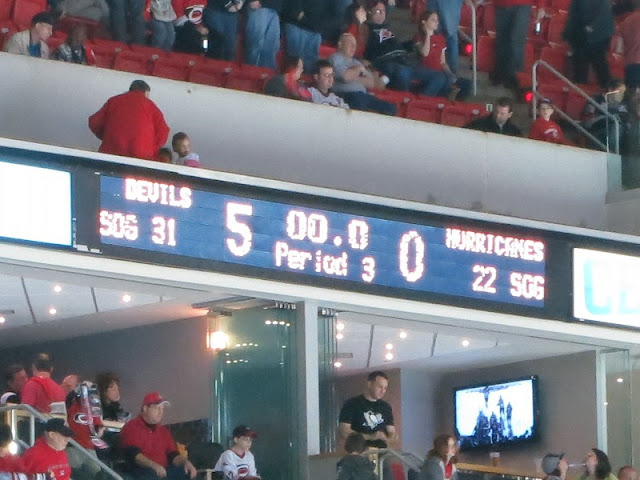 Posted by Dave DeBaeremaeker at 3:16 PM

Boo Devils! I'm a Rangers fan! Although I live in Oklahoma. I'm like you, never have attended an NHL game. I love hockey though!

I love Hockey! We have a local minor league team (Scranton Wilkes-Barre Penguins) which are the farm team for the Pittsburgh Penguins. The arena is right in town and they pack em in for all home games! We often go and cheer on the home team, eat some way over priced snacks and have a few beverages! it's a fun time and even if you don't follow the game (which we don't) or know all the rules (which we don't) ya pretty much figure it out pretty quick. My kids especially love it! It's a good time. I like the fights and the special effect.