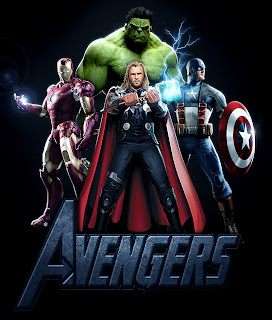 You never know what geocaching has in store for you.

Last weekend I took the family eastward to the beach for a four day vacation.  When I go on such trips I always check to see what caches are along our route and make plans to grab the most favourited ones.  When I was researching the caches along this particular  route I saw a 7 part cache series based on the comic characters in The Avengers come up so I added it to my 'maybe' list. We are travelling with two small kids (3 years, 6 months) and are driving across the state so one never knows how much time one has to do caching, and how much time will be taken up with feeding and diaper change stops.

The series in question revolves around this puzzle cache: Avengers Series Finale: Nick Fury. The other 6 caches, themed one per action hero (Hawkeye, Black Widow, Captain America, Hulk, Thor, Iron Man), each contains a piece of information used to solve the puzzle.  Some of the stages also have a thematic prop for that character and the cacher is encouraged to take a picture with it and post it with the online log. 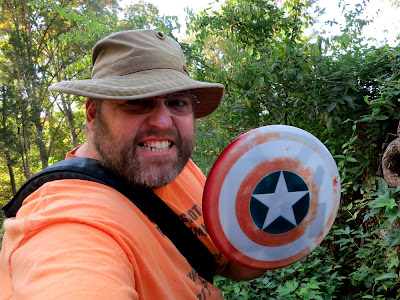 I wasn't sure what to expect from this series. The idea is intriguing  but I wasn't sure how much time I wanted to invest into a series I would likely not have time to finish. I also am injured. I fell off my bike the week before and still am suffering from bruised ribs and some nasty road rash, so I wasn't sure if I would have the stamina to tackle this. The final mentioned having to reach high (it recommends bringing a ladder or a small child to help retrieve the cache) so it is likely that even if I do complete the series I may not have the physical ability to grab the final.

Often cache series like this over promise and underperform, so I was skeptical.

All of this doubt was in my mind when I pulled up to the first cache (Hawkeye). I was ready for a disappointment, or at best to have met expectations. Then I got to GZ and saw the cache... 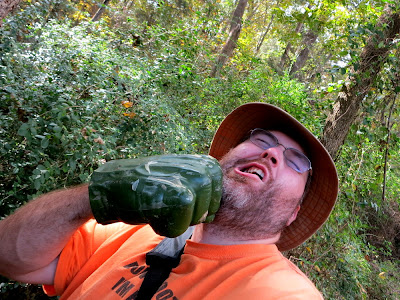 HOLY COW! That cache was awesome! Well above expectations, and completely unexpected. Right then and there I decided I would do my very, very best to complete this series.  I will refrain from describing it except to say that it was 100% original, and completely thematic to the character.  If you go check it out I am sure your reaction will be the same. Trust me.

I took some pics of the vital bits of information I needed for the puzzle, signed the log, and rushed back to the Geovan of Destiny to get to the next cache.

I was still unsure of the final, and its promise of having to climb for the container. With my injuries I wouldn't be up for a climb. However I knew, based on this cache, that even if I found just a few in this series, I was going to have a great day caching. 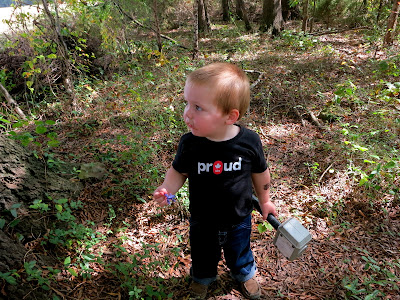 So I went from cache to cache. Each time wondering how the character was going to be portrayed in cache form, and each time being duly impressed.  Even Zeke got into the act (when I could pull him away from watching Cars 2 on the tablet in the van).

As you can tell I also took self portraits with the super-hero props found at each cache (cause that is how I roll).

When I got to the sixth cache (Iron Man) I was finally armed with all of the vital information I needed to solve the puzzle and get the final coordinates.  I then drove off  (well, technically my wife drove, I navigated) to the parking coordinates (more vital information found while finding the caches in this series).

So here I found myself near the end. I was expecting more awesomeness, but I was concerned about my ability to reach the cache itself. I had over-extended myself a bit already today so my bruised ribs and road rashed shoulder was aching, and my ability to climb, or even stretch to reach high places, was seriously inhibited. 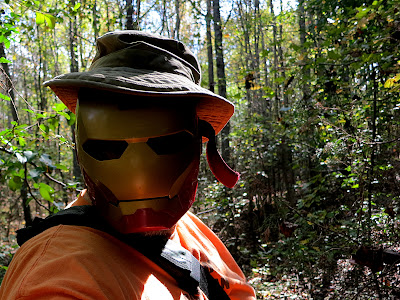 Since I had come this far already, I headed off to the GZ anyway. Just a 500 foot walk, but in my condition it felt like a mile.  It would be worth it just to see where this awesome series would finally take me.

When I eventually arrived at GZ, I found the prop, which was in a large tree crotch about 7 feet up, and I was just barely able to reach it (thank the maker for my 6'2" frame). However there was no logbook. Crap!

I did some recon via camera by taking pictures of the spot I found the prop in, and sure enough there was a container a bit deeper in the tree.  I used my walking stick to fish the cache closer to the edge. Eventually it was close enough that I could just get my fingertips on it. A bit of blind groping (for the cache!) later I had the container in hand. 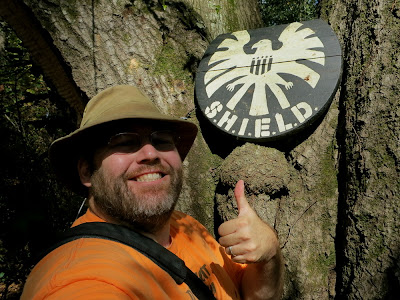 The log book is full of awesome surprises, and I spent a good deal of time looking at them. I took a bunch of pics of the logbook (what other log can I say I did that with?).

Finally I packed everything back up, placed it back as best I could, and with a huge smile on my face I walked back to the Geovan of Destiny.  When I got back I popped two extra strength tylenol, fell into the passenger seat, and pulled out my laptop - I couldn't wait to log this one.

This was a great cache by itself. As the finale to the series it was fantastic. The entire series is geocaching gold. I gave each cache in the series a favourite point.  I just wish I could give them 10.

If you are ever in the area I highly recommend checking out this series. A healthy Dave would have had no issues tackling the terrain, and kids should have no issues either.  All around an amazing adventure.
Posted by Dave DeBaeremaeker at 7:53 PM

These articles have got complete sense without confusing the readers.
android news

Sounds like a fabulous cache and it's clear from the photos that you had a BLAST! :o)