Note: I originally wrote this article for cachecrazy.com .  It was published there on Wednesday October 17, 2012.

It does not take new cachers long to realize that the zip lock bag is a standard tool used by hiders. The zip lock is often employed to protect logbooks and other contents from any moisture that may seep into a container. In rare cases it is actually used as the container.

I have frequently used these bags as well to protect my own log books, but over time I have lost faith in the trusty old zip lock bag. 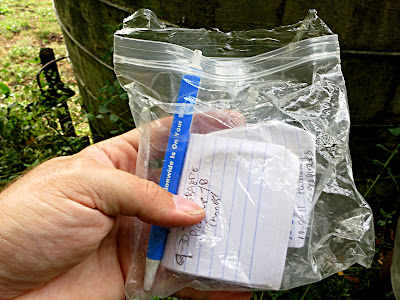 I am here to give the argument that putting your faith in zip lock bags in caches is a bad idea for most purposes, especially if you are using them for moisture protection - even if it is the second line of defense.

The problem with zip lock bags is that they are not designed for the punishment and abuse that they will take from cachers (even the most well intentioned ones). A zip lock bag is designed to be opened just a few times before it starts to wear out, but a typical cache will get dozens to hundreds of visitors, which vastly exceeds the capabilities of the bag. The seals wear out, and the plastic develops holes much faster than the maintenance cycle of all but the most frequently maintained caches. They quickly loses any waterproof ability it has. This is just as true of the most expensive versions as it is of the cheap dollar store variety (tho you will get a little more mileage out of the more expensive ones).

All of this means that that zip lock baggie you used to protect that precious log book in your hide is likely failing you right now. Your well planned multi line defense system is now dependent solely on the container (kinda regretting that pill bottle now eh?).

Yesterday I went caching and found 11 caches. Most of these caches used a zip lock bag to store the log book in. All of these bags were comprimised in one way or another and no longer are useful for waterproof protection.

The following are some of the damage I found, so you can see exactly how ineffective these baggies are at waterproofing. Starting with a closeup of the baggie from the first picture in this post: 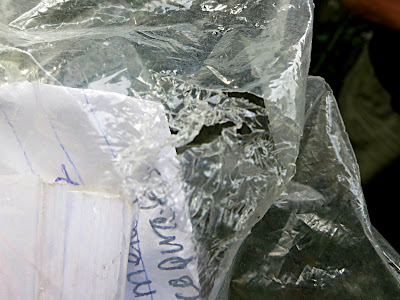 As you can see this bag is ripped. The reason is that pen. If you put a pen in a zip lock baggie, you are essentially putting a giant pokey device into the most sensitive part of your defensive network. That pen is almost guaranteed to puncture that baggie, and render it useless for water defense. This is doubly true if your container is too small for the baggie, like this: 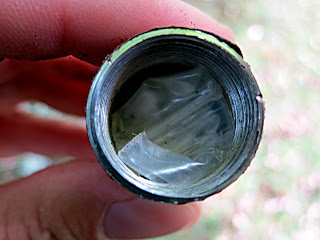 As you can see that baggie is scrunched in there pretty good. The problems with this are two fold. First that bag has been folded over the seal, which has crimped it and as a result comprimised its water proofing abilities. Second by being so tight in the tube, a cacher has to pull harder on the baggie to extract the log. This pulling puts extra stress on the plastic and wears it out much faster.

The last example I have is when a hider uses a zip lock bag as the only line of defense. The following pictures are of a tin can (never waterproof!) and a huge zip lock baggie containing the entire contents of the cache: 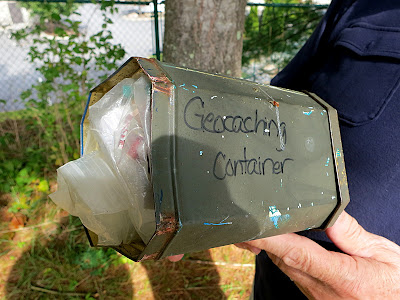 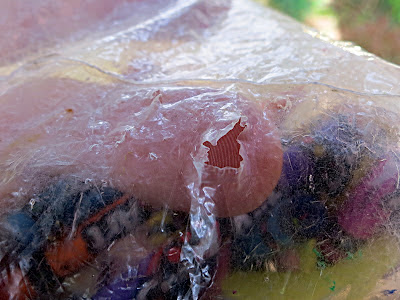 As you can see the container is starting to rust, is not water proof, and its sole moisture defense plan is a torn zip lock baggie. This cache is destined for some serious maintenance issues - it is just a matter of time.

So you may ask yourself, how do I protect the log book if I can't use a baggie? My suggested solution is a layered defense of containers. I suggest using a smaller waterproof container to keep the log in, like a micro film can, bison tube, or a small tupperware container if the cache is large enough. Put that container inside the larger outer container that is your cache, which should also be rugged and waterproof, and you will have a well protected log book that will not wear out nearly as fast as that unreliable zip lock baggie.

You may be saying to yourself that this adds to the expense of the cache hide as now you need two quality containers. My response would be: Yes. However you can get good cache containers very cheaply - film cans and bison tubes are only a dollar or two each (even cheaper in bulk) and you can often find sales on Lok'n'Lok containers for less than a dollar per container.

It is much better to put out one quality cache that will last for a long time, than two or three cheap caches that are destined to quickly become geo-trash, don't you agree?

So I hope you will consider these words the next time you think of using that zip lock bag in your cache hide for any other purpose than organizing the contents.

If this article has done its job, this last picture should give you shivers down your spine: 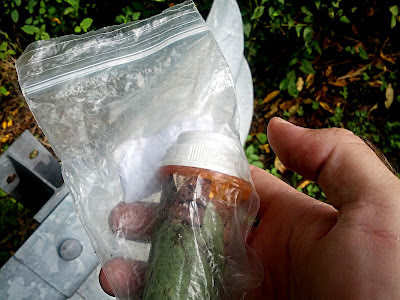 Posted by Dave DeBaeremaeker at 4:36 PM

I actually saw a cache a few months back where the container itself was a large zip-lock bag with a smaller baggy inside for the logbook. All I could do was shake my head.

I took the smiley but mentioned in my log that as it was the cache wouldn't last. Especially with a rip already in the large ziploc.

I actually went back to read the logs of the cache and looks like they may have heeded my advice as they've had 1/2 a dozen compliments on the decorated container.