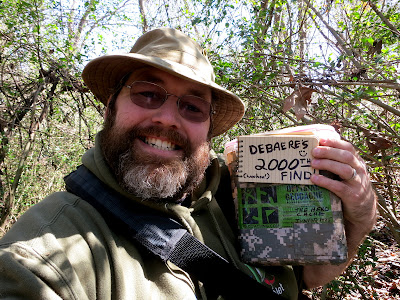 So I accidentally hit a milestone today. I got my 2000th geocaching find in the bag. w00t!

I say accidentally because I didn't intend to hit this milestone today.  I have had my eye on a multi-cache up in the mountains that I am planning on hitting next weekend that I was going to use, but it wasn't meant to be.

Todays run was supposed to get me enough finds to get to 1999 in prep of hitting the milestone on that multi-cache in the mountains.  I needed 8 finds, which annoyingly I got just after lunch.

This left me in a bit of a dilema.  Should I stop at 8, or keep going?  I was having too much fun, and I did have an entire afternoon to kill,  so I decided I should keep at it.

I normally like to pick a special cache for a milestone just to give things a sense of occasion, and to have an interesting story to tell.   So I spent a few minutes quickly examining the favourited caches in the area, picked the most interesting looking one, and decided to hit that up as my milestone cache instead.

The cache I chose is called The Hero Cache (GC24VPY) in Elkin NC.  It is a simple 2 part multi-cache in an out of the way park.  The best part was the large sized container at the final.

With my signature on the cache, and my milestone in the bag, I still kept going. The total at the end of the day was 14 finds, and one disappointing DNF.  Well beyond the 8 I needed, but I certainly had a lot more fun than I would have if I quit early (tho I think I wore out the dog... she's snoring in her bed beside me. Oh well, thats the price you pay for an amazingly fun day out on the trails).

Now, on to the next adventure!
Posted by Dave DeBaeremaeker at 8:57 PM

Congrats! Even though I'm still in the low 100's I make my milestones ones I will remember. =)

YOU are the man!
Congrats brother!
BH