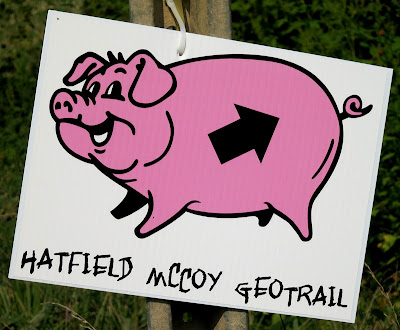 This weekend my family and I piled into the Geovan of Destiny and headed towards the Kentucky/West Virginia state line to attend a mega geocaching event deep in Hatfield and McCoy country.

The event is designed to support the Hatfield McCoy GeoTrail, which is an ever growing series of geocaches placed at various locations of historical significance to the infamous Hatfield McCoy feuds back in the late 1800s.

The event was held in Blackberry Park in the exact middle of Nowhere, KY - tho the folks around there call it Ransom KY.  The scenery is beautiful, but its definite boondock country.  A perfect place for such an event.

Unlike other large events I have been to, this one did not have a lot of activities at the event itself. The main events was the pre-mentioned geotrail (which I will cover in a future post), and this year they released a 100+ power trail that made up some geoart (of a pig).

The event consisted of some announcements, followed by a group photo, then a lot of milling around, talking, eating lunch.  There were even a few vendors selling geocaching related swag.

One of the Groundspeak Lackeys (what they call their employees) was also in attendance.  He happened to be from the technical side of the company, so I spent a good amount of time talking about the tech side of the company. Cool dude.  Glad I met him.

These are whbaisden (aka Wendy), and Spongebob CachePants giving some pre-event announcements. 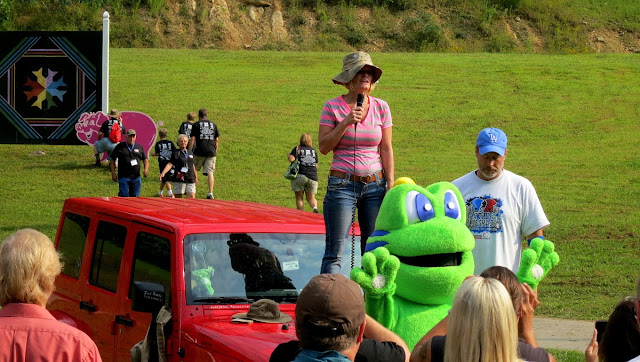 This Jeep was signed by all that came.  It was also taken to Geowoodstock XI, where I had signed it previously. 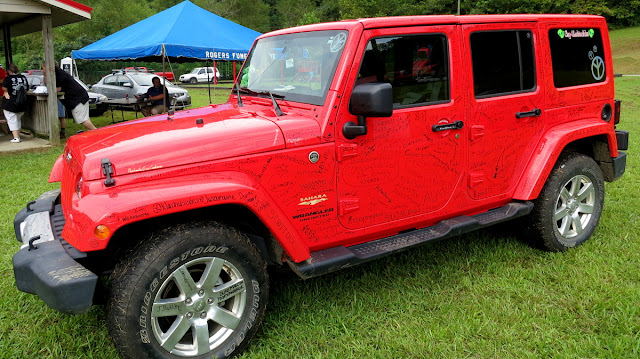 Signal the Frog, the geocaching mascot from Groundspeak Inc, was also in attendance.  Abigail seemed enthralled with him. 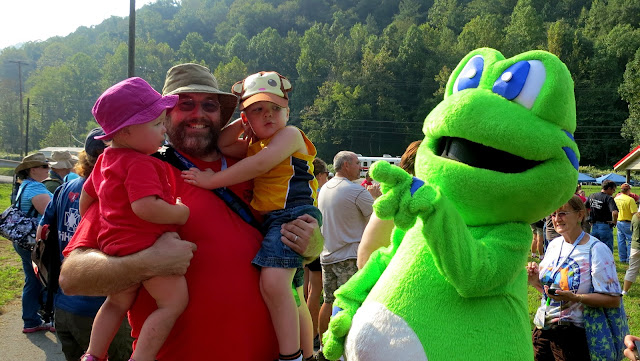 Blackberry Park is mostly grass, with a few amenities strewn about.  Its the people that make it awesome.

The group photo.  We are on the left side, 3 people back from the pair of blue shirts:

So that was the event.  A simple affair for a few hundred geocachers, but it made an excellent home base to do the Hatfield McCoy GeoTrail, which was the highlight of the day. Like I mentioned before, I will cover the feud in an upcoming post.  We spent the morning at the event, and the afternoon on the trail.

For now let me just say that southeast Kentucky and southwest West Virginia has some awesome geocachers, some jaw dropping gorgeous scenery, and some amazing history, all rolled into one awesome package.  If you have never been, you are missing out. Stay tuned for more, coming right up next post(-ish).
Posted by Dave DeBaeremaeker at 8:42 PM