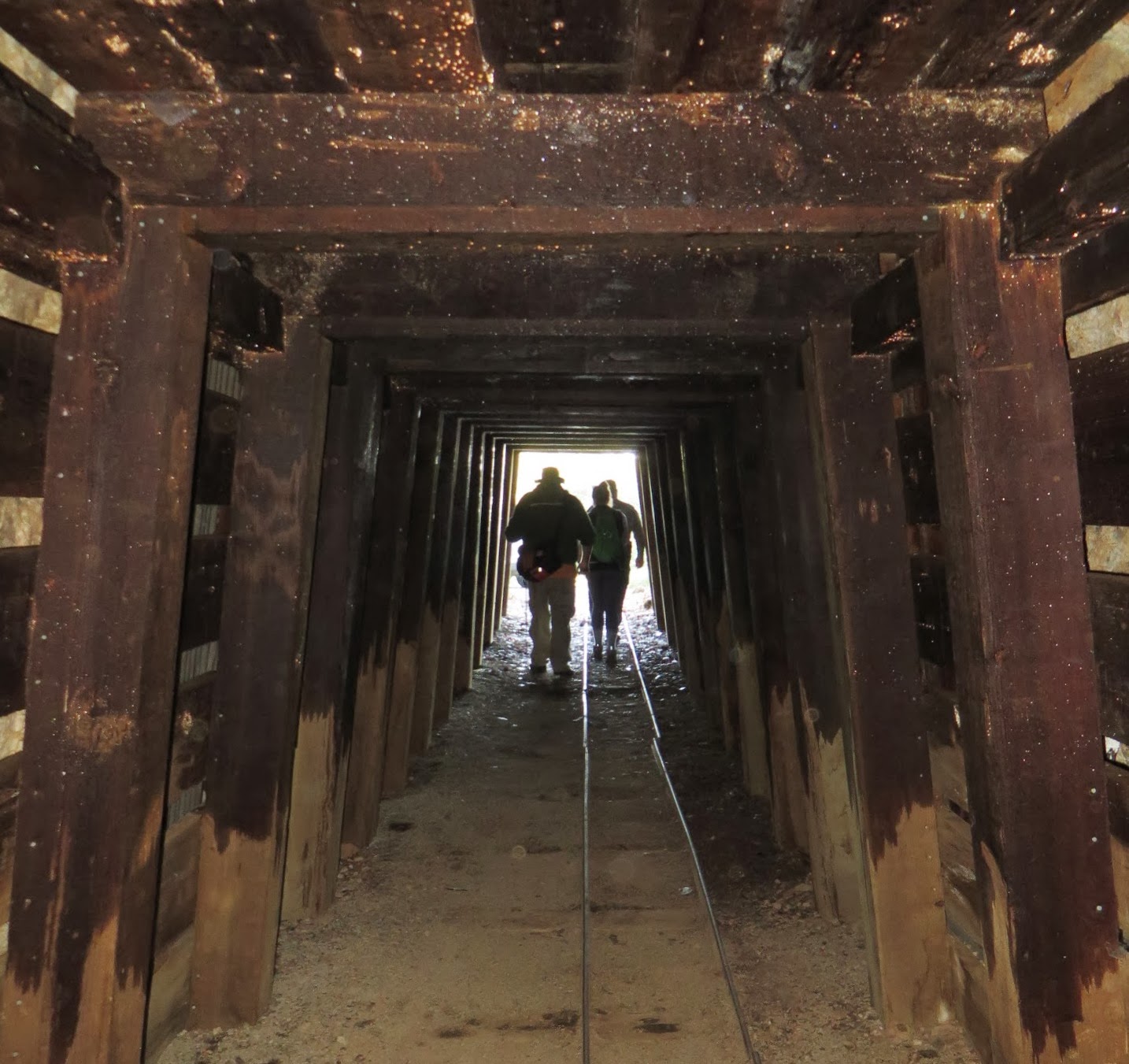 The New Almaden Quicksilver Mine is nestled in the large hills to the southwest of San Jose California.

In the 1800s this mine was the most productive mercury (aka quicksilver) mine in the world.  Its strategic importance was so great than during the Civil War the Union army stationed forces nearby to ensure the mine did not fall under control of those sympathetic to the Confederacy.

The mine also produced the majority of the mercury used to process gold during the gold rush era.

The mine closed for good in the 1970s, however the land is currently a county park, and many of the old mining equipment, and mine shafts, are still there, waiting to be explored.

I did just that (the exploring part) last Sunday.  I was fortunate to have two local geocaching companions, SaSiCo and silverbeetle join me on this adventure.

There are many geocaches in the park, including a complex 3 stage earth cache called Mercury Rising (GC3NGTT), that was the main goal of our hike.

We started out our day at the mine museum to gather some information for the earth cache.  As soon as we entered the old house that houses the museum we were immediately identified as geocachers by a park ranger named Heidi.  She proceeded to talk for an hour about the history of the mine.  She seemed eager to inform, and she was amazingly interesting, so we were happy for the education.

Eventually we gathered the information we needed and headed a couple miles down the road to the trailhead.  We then had a 2 mile hike to the first waypoint for the earth cache, along trails that looked like this: 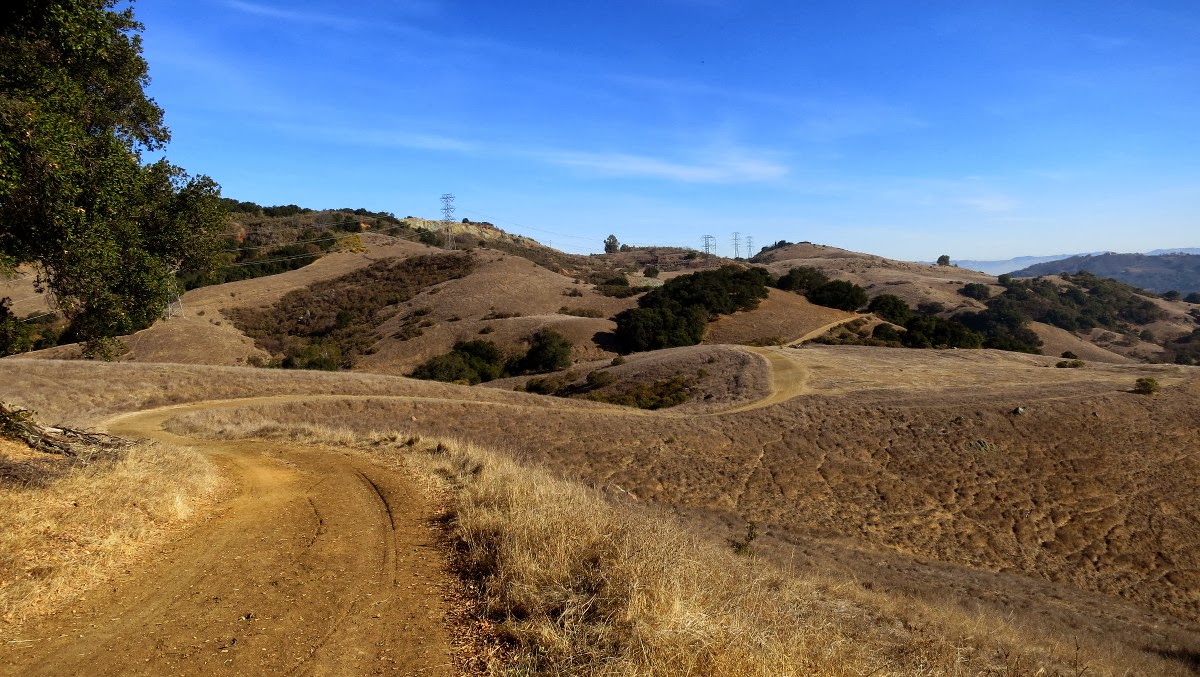 As you can see it was a perfect day for a hike - moderate temperatures, clear skies, slight breeze... tres fabulous. 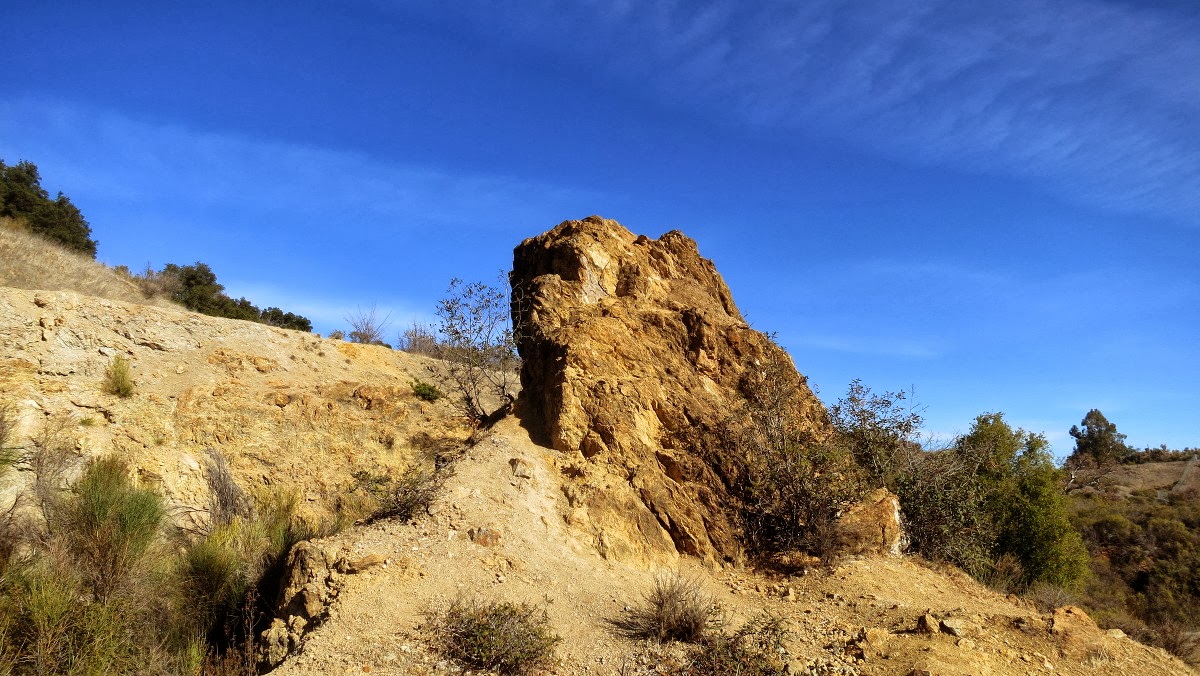 After a couple short miles we arrived at one of the waypoints for the earth cache: the furnace used to process the ore and separate out the mercury. This particular furnace was built to increase mercury production for use in munitions during WWII. 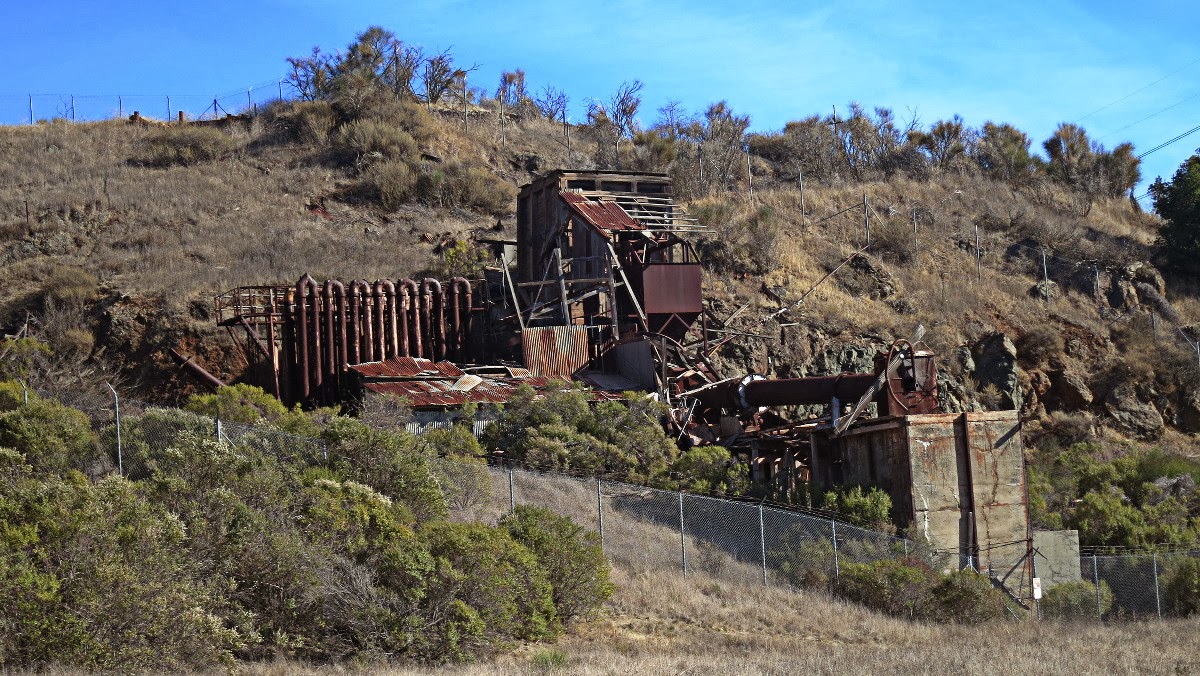 After gathering the required information from the furnace site, we headed off to the final.  Along the way we were treated to alternating extremes of amazing views, like this one: 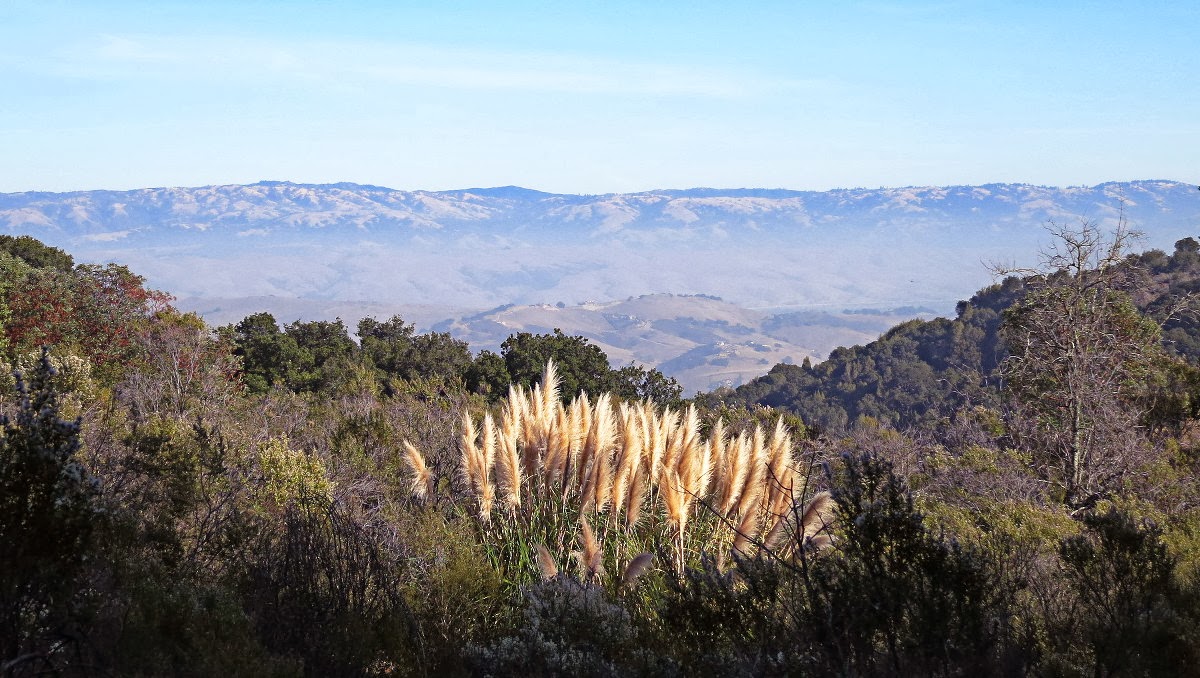 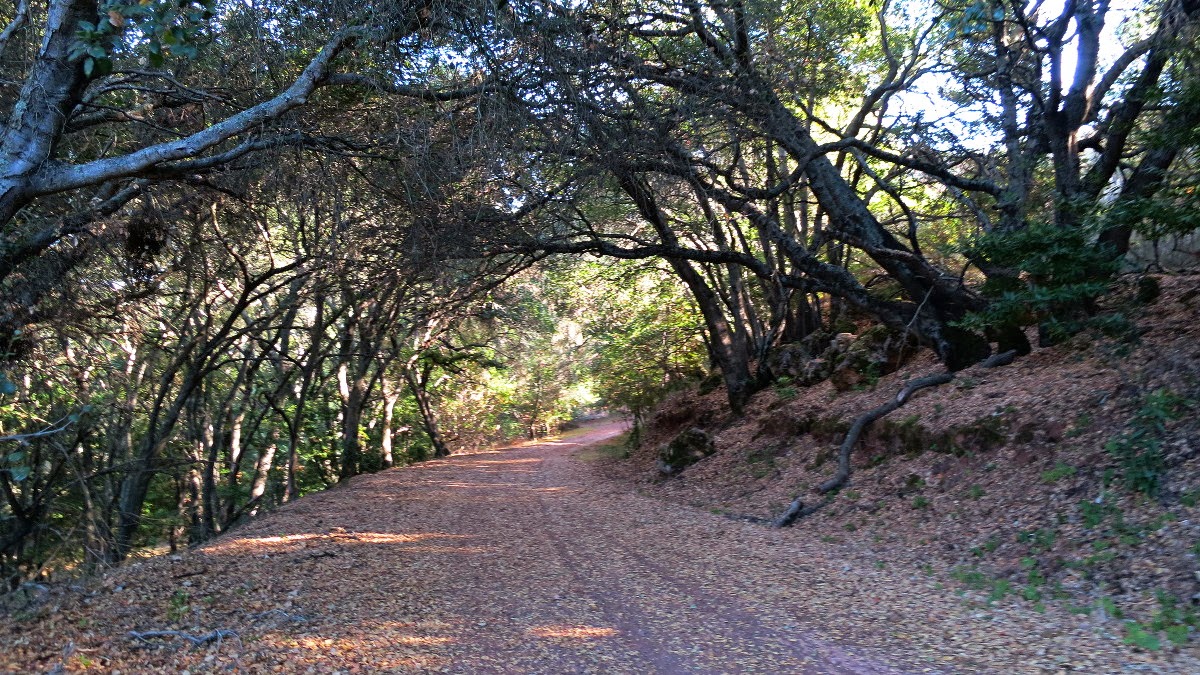 Eventually we arrived at the final for the earth cache, the San Cristobal mine entrance.  This entrance (also pictured as the first photo above) extends 200ft into the side of a hill before its blocked by a gate - one presumes for "safety".   The following shot was taken of the mineshaft beyond the "safety" gate - it looks rather tight in there - not built for big guys like Yours Truly. 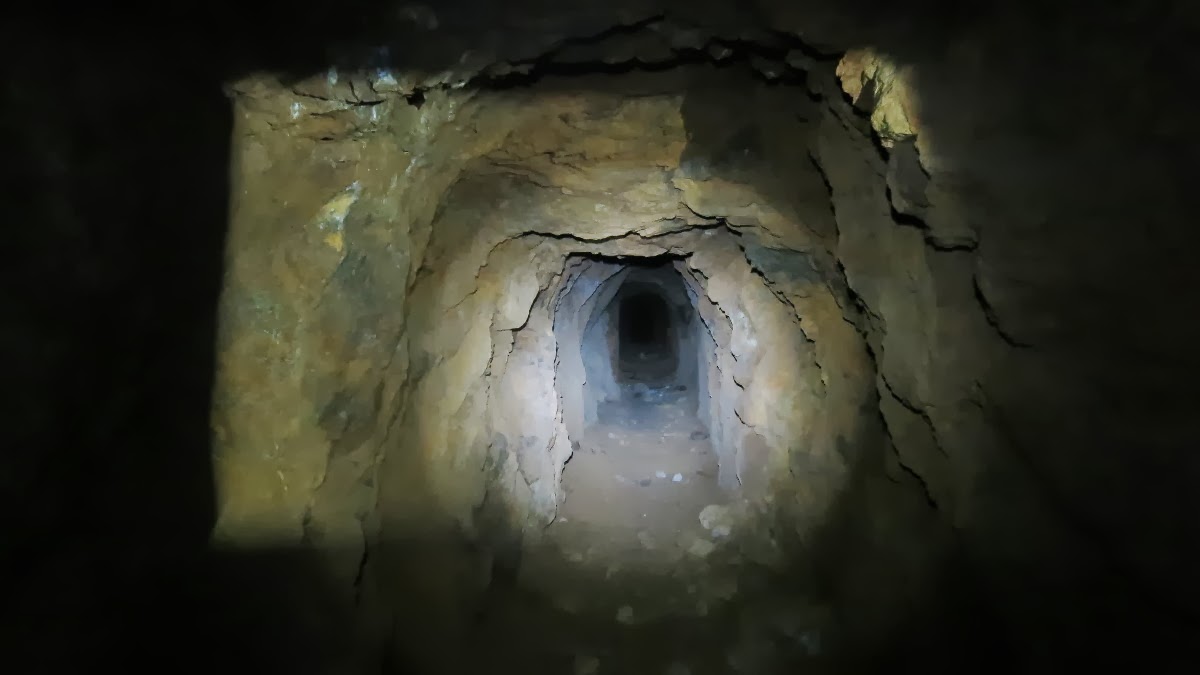 As it turns out we ran into a different park ranger at the mine entrance, and he gave us some more fascinating and useful information about the mine.

So with all of the information required for the earth cache in our possession, we headed off down the trails in search of further adventure, caches, and interesting things.  As it turns out we got all three.  As we were getting close to the end of the trail we noticed smoke coming from the hills "over yonder".  At first we thought it was just chimney smoke as there are residences around there, but we soon realized that the smoke was getting a) denser, and b) darker.  SaSiCo called the park office to report the smoke, and after a while they called her back to let us know that it was a truck that had caught fire. 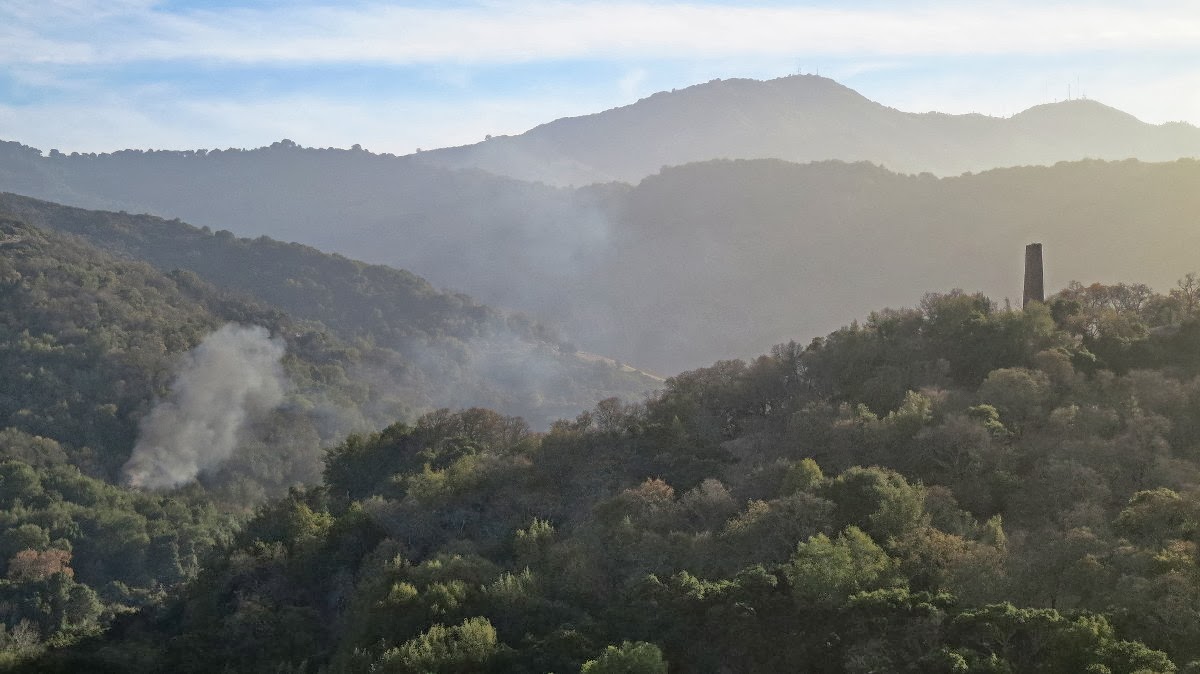 We continued the hike, and grabbed a couple caches. 30ish minutes later, as we approached the parking lots, we saw fire trucks go by along the road.

That crisis averted, SaSiCo and I drove up to Bald Mountain to check out the views.  It was a 20 minute drive further into the mountains, and another significant(-ish) hike, but it it was well worth it. 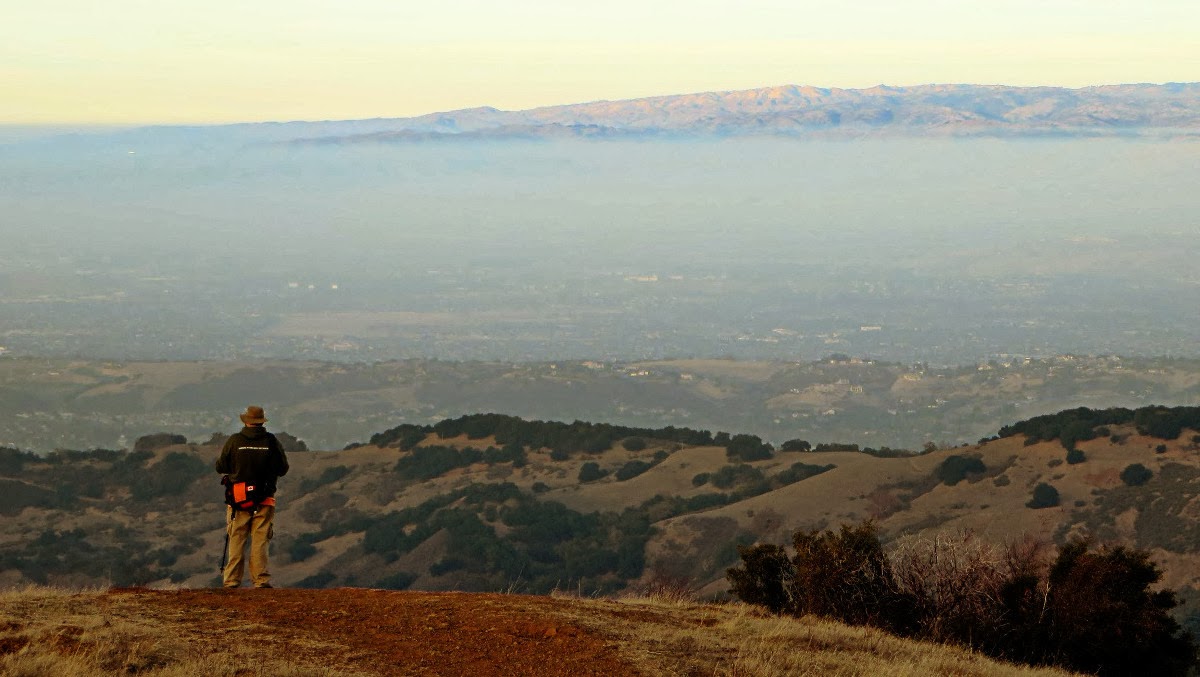 If you're thinking what I am thinking (and really, since your reading this, you can just pretend you are), I could have taken this view all day.  But alas, daylight was coming to an end and it was time to return to civilization.

We drove off the mountain as the sun was setting.  We hit up the 7/11 for some celebratory slushies before going our separate ways.

This ends my adventures in California for this trip, but alas, I will be back, and I'll be bringing my GPSr with me.

Posted by Dave DeBaeremaeker at 12:17 PM