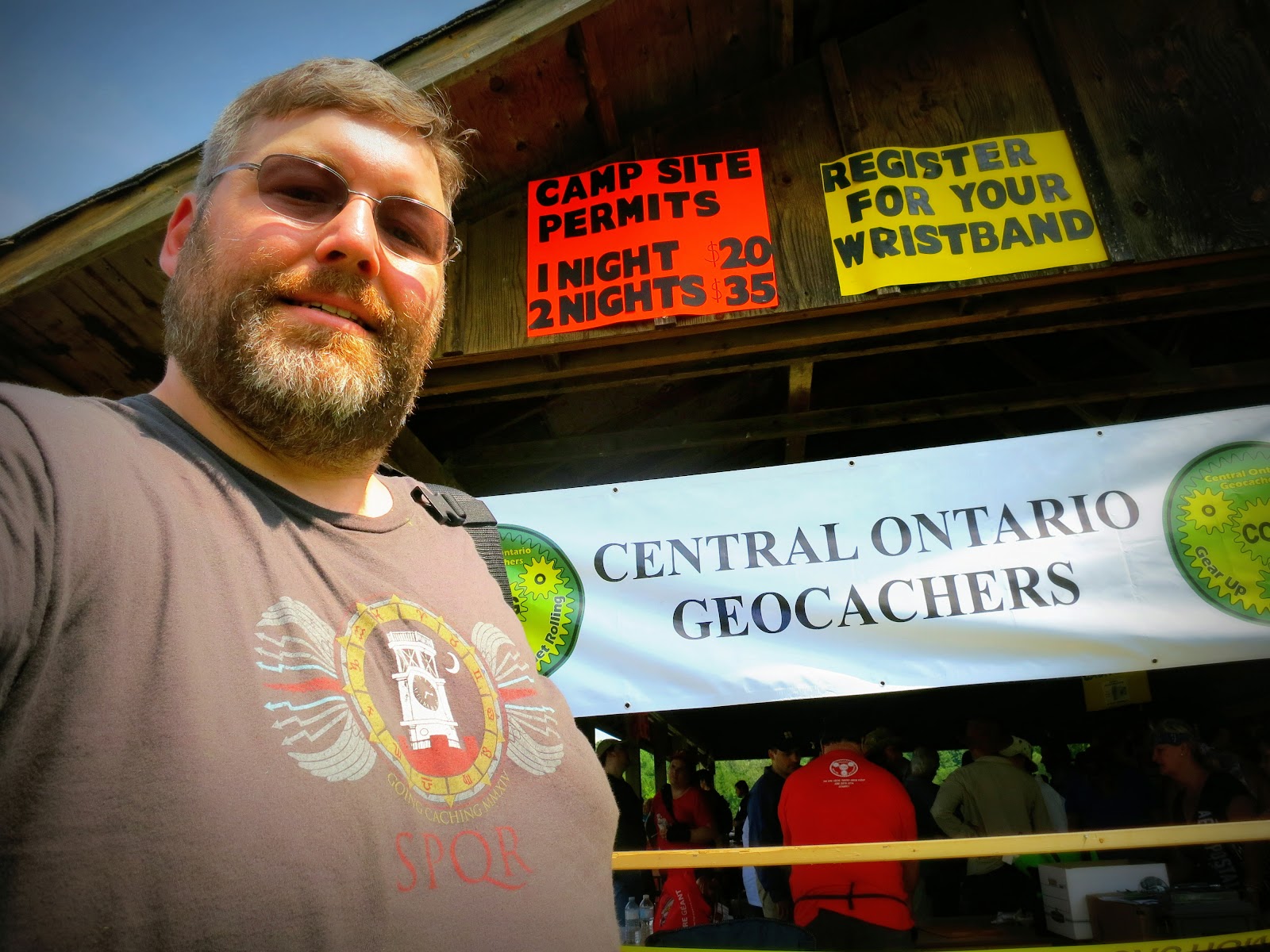 Geocachers in central Ontario certainly know how to put on a great event.  Last weekend I had the pleasure of attending their annual Mega event: The COG Cache Theory.

Like all good Megas that I have attended the main event is on the Saturday, but it was really a full weekend of events, fun, merriment, and lots (and lots) of awesome geocaching.

The following is a breakdown of how the weekend unfolded.

The event was held in the Tottenham Conservation Area in Tottenham Ontario.

We (my wife and I - kids stayed with their grandparents) arrived at the conservation area at 2:30PM  on Friday and immediately set about then process of setting up camp.  This is the first time my wife had I have done tent camping in 5 years, since before my oldest kid was born.  We did manage to quickly set up the tent, and get the camp into a serviceable order.  I then headed out on my bike to grab the 23 caches that were placed as part of some geo-art (in the form of the geocaching logo).  The caches were placed along the neighbouring concession. 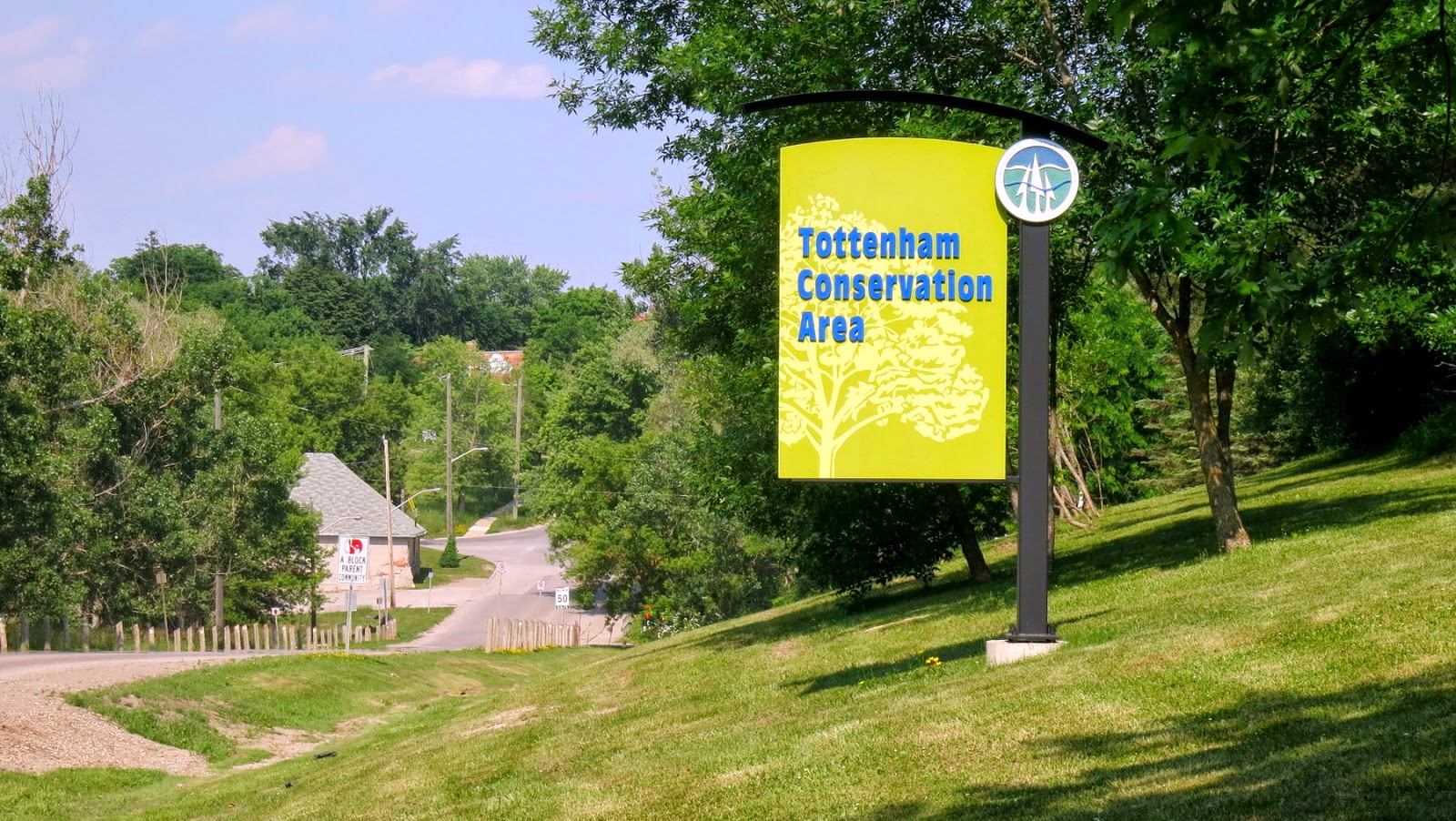 2 hours, and 6.5 miles later I pedaled back to the campsite with 23 smileys under my belt (you may think 2 hours is a long time for 6.5 miles, but in my defense for a couple of those caches I was able to keep up with a gang of cachers in an SUV...)

After supper was the first event of the weekend, which was a series of party style games, leading to a grand champion).  Both my wife and I got eliminated from the competition on our first rounds, so we decided to try our hand at a nearby multi-cache.  It was here we learned just how many geocachers it takes to find a D2/T2 cache... 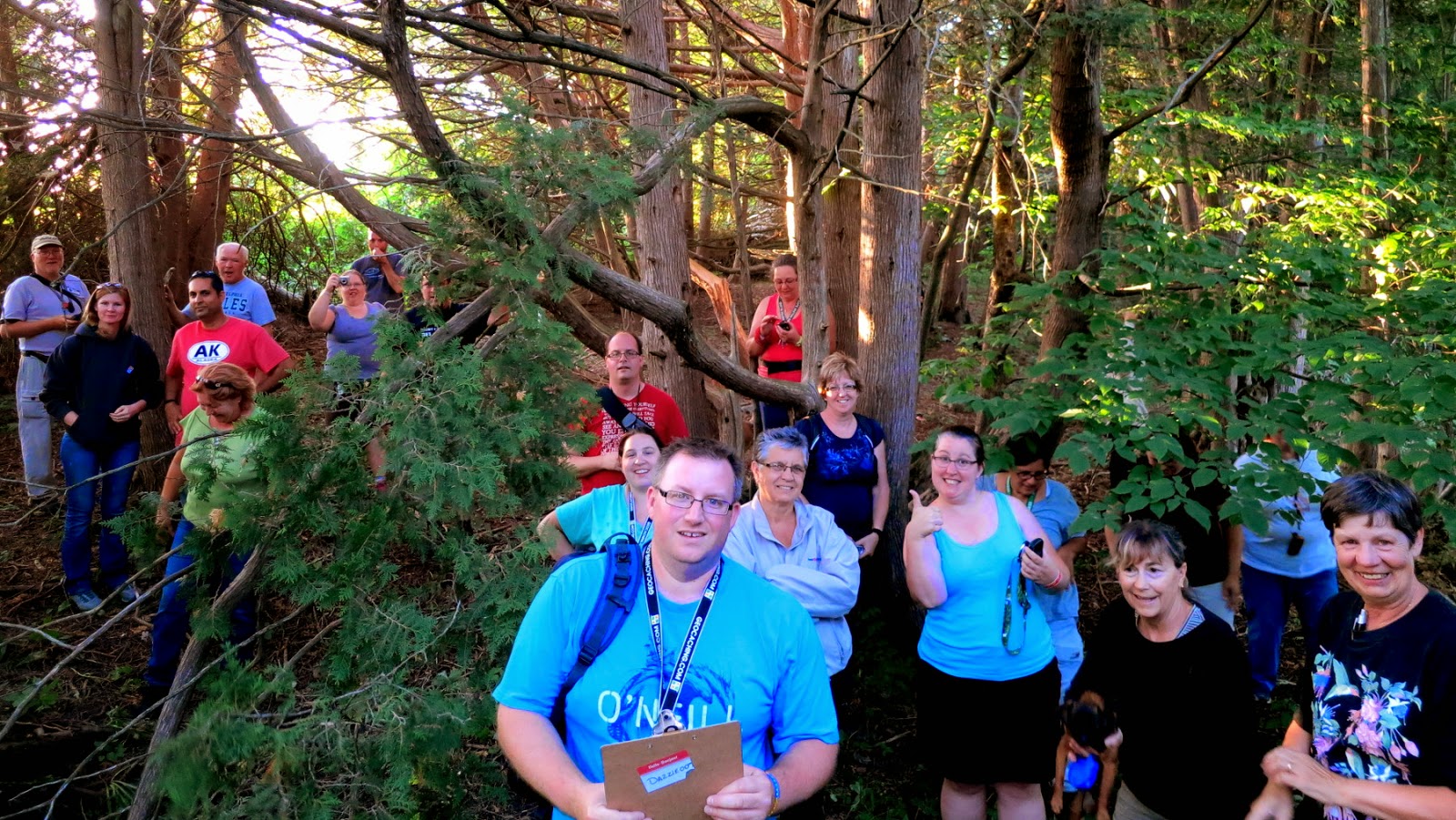 It was at this event where I realized what sort of good time I was in for, and how awesomely crazy Canadian geocachers can be, as several cachers broke into an impromptu interpretive dance: 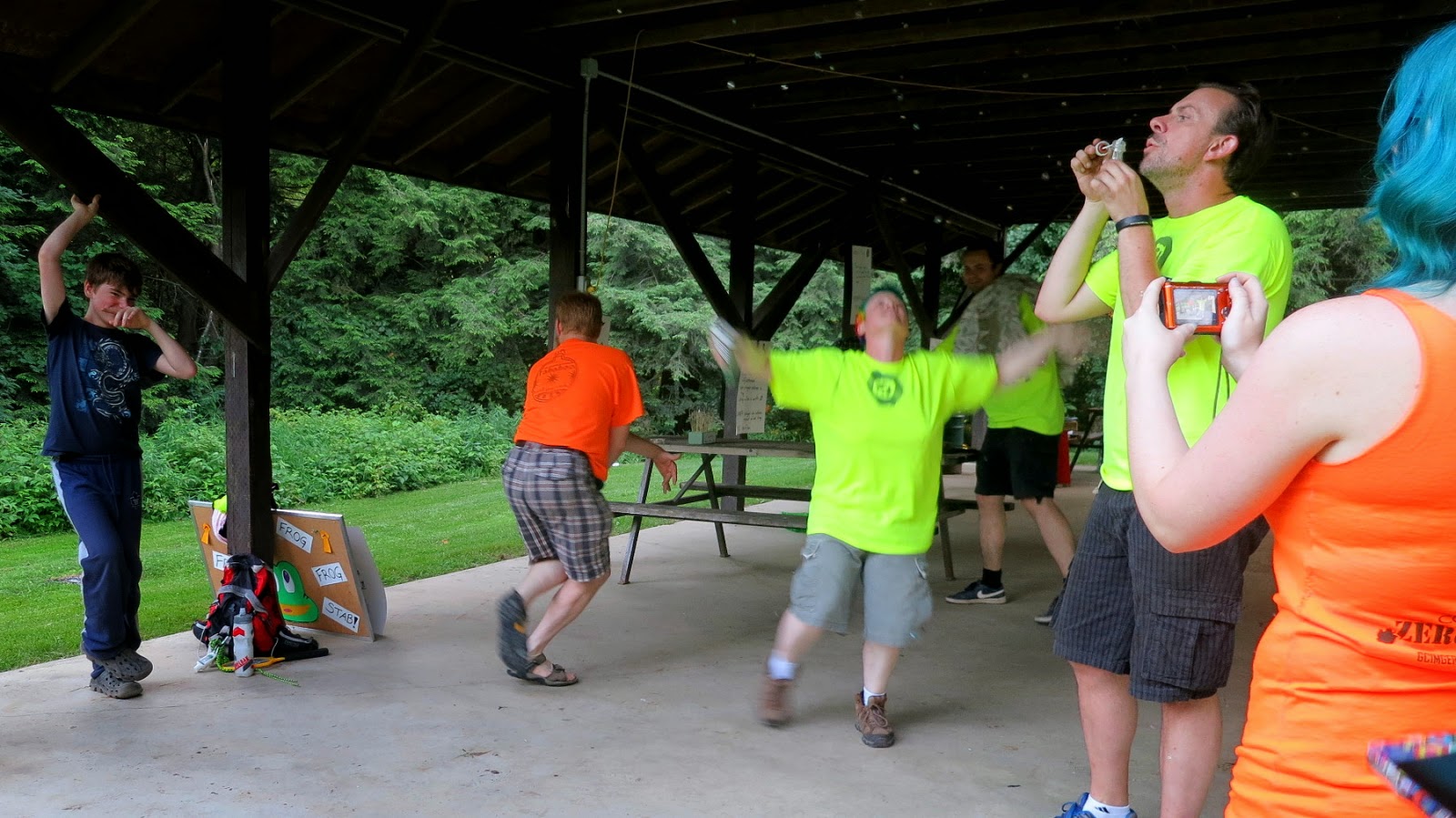 After the dance we decided to call it a night so we headed back to camp.  The next morning I started the day with a hearty outdoor breakfast.  Few things taste better than bacon cooked outside. 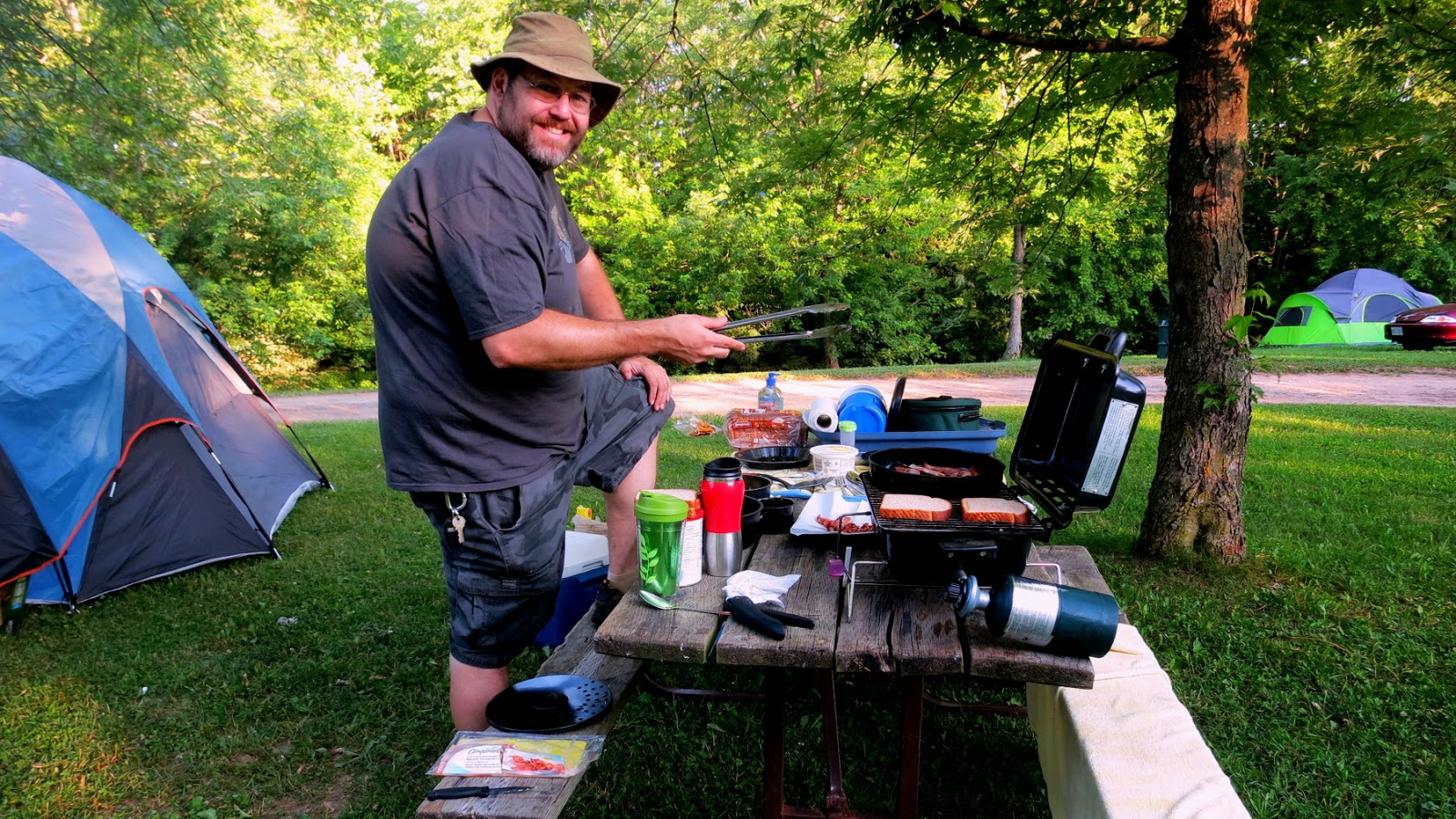 The theme of the event was the Big Bang Theory, so many of the caches were science themed, and of course, hanging out with the celebs. 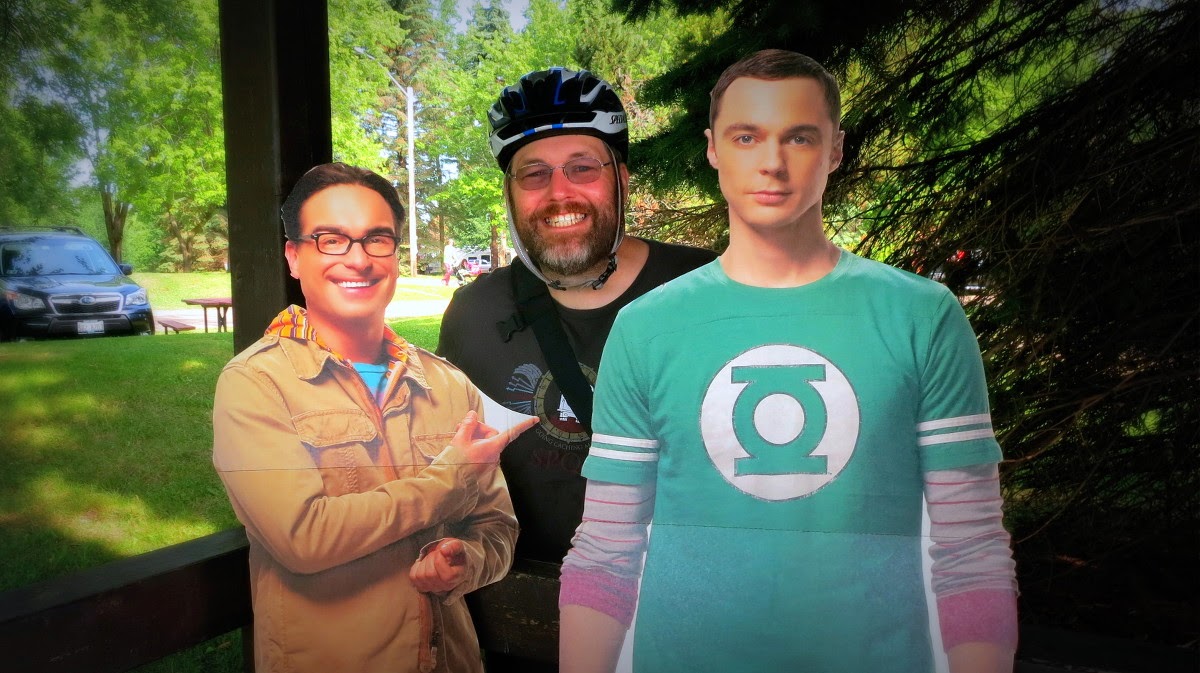 The COG folks placed a lot of caches specifically for this event, and the ones I did were all great - some downright amazing.  I'll cover the caches in a follow-up post, but needless to say there were more awesome caches to be found than I could possibly have had time for. I gave out a virtual flood of favourite points.

Appropriately enough, the event log was a lab coat. 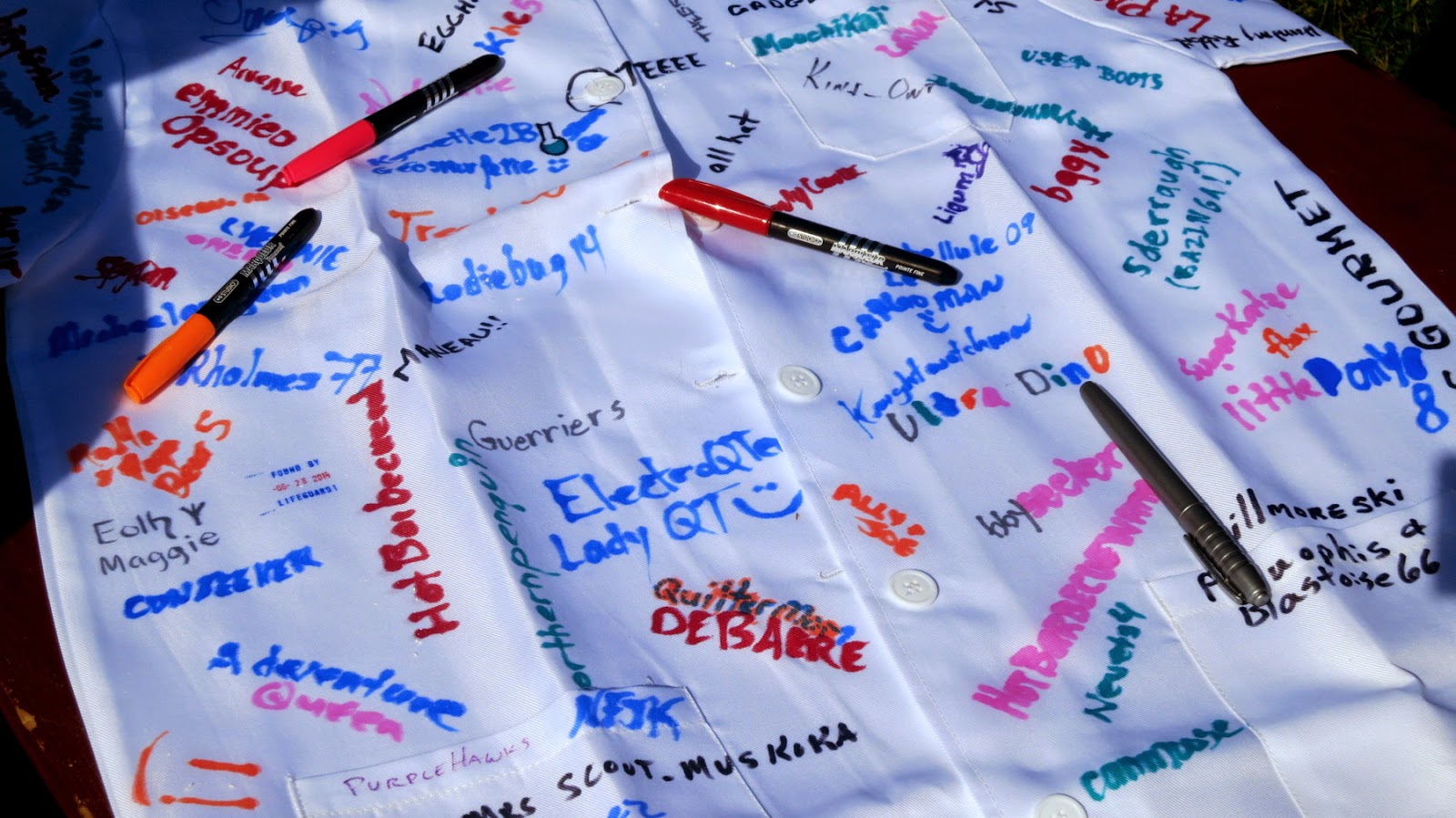 The event itself was quite simple: some opening remarks, a few meet-and-greet style games (geocacher bingo etc.), a "Meet the reviewer and lackey" panel, and a closing ceremony.  The rest of the time was free time so we could do some of the awesome geocaches in the area.  This worked out well as there were so many top notch caches, and some great scenery and trails to explore, that I really did want to spend most of the day caching.

Several of the caches were placed on a rails-to-trail trail that ran along the north side of the lake, opposite the conservation area.  As you can see, the scenery from there was beautiful. 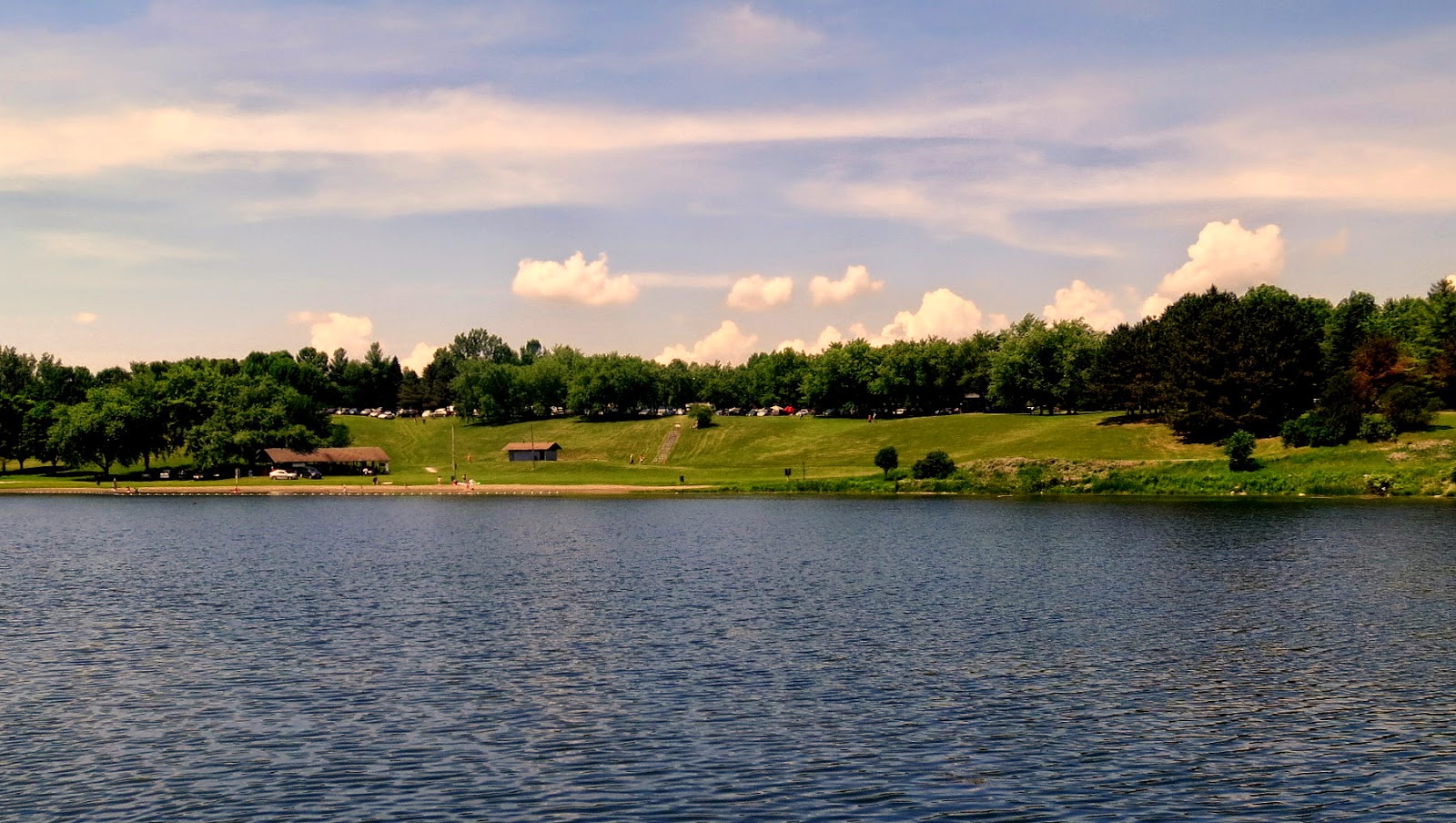 This is a good place to mention the benefits of having bikes at the event.  I had brought bikes for my wife and I, and we used them a lot.  Over the course of the 3 days we were at the conservation area I biked almost 18 miles, and my wife did 6.  We rode to then majority of the caches that we did, which allowed us to enjoy the day a lot more than if we used the car, but still cover some miles, and not have tired feet at the end of the day.

Of course, like most Mega events, there were lots of impromptu cache parties at ground zero.  Unlike most Megas, however, I didn't play "pass the logbook" that often. This is likely due to the large number of caches for folks to find - spread out the crowd.   It is also nice knowing that the people you see walking down the trail behind you are not people you need to conceal the geocache from. 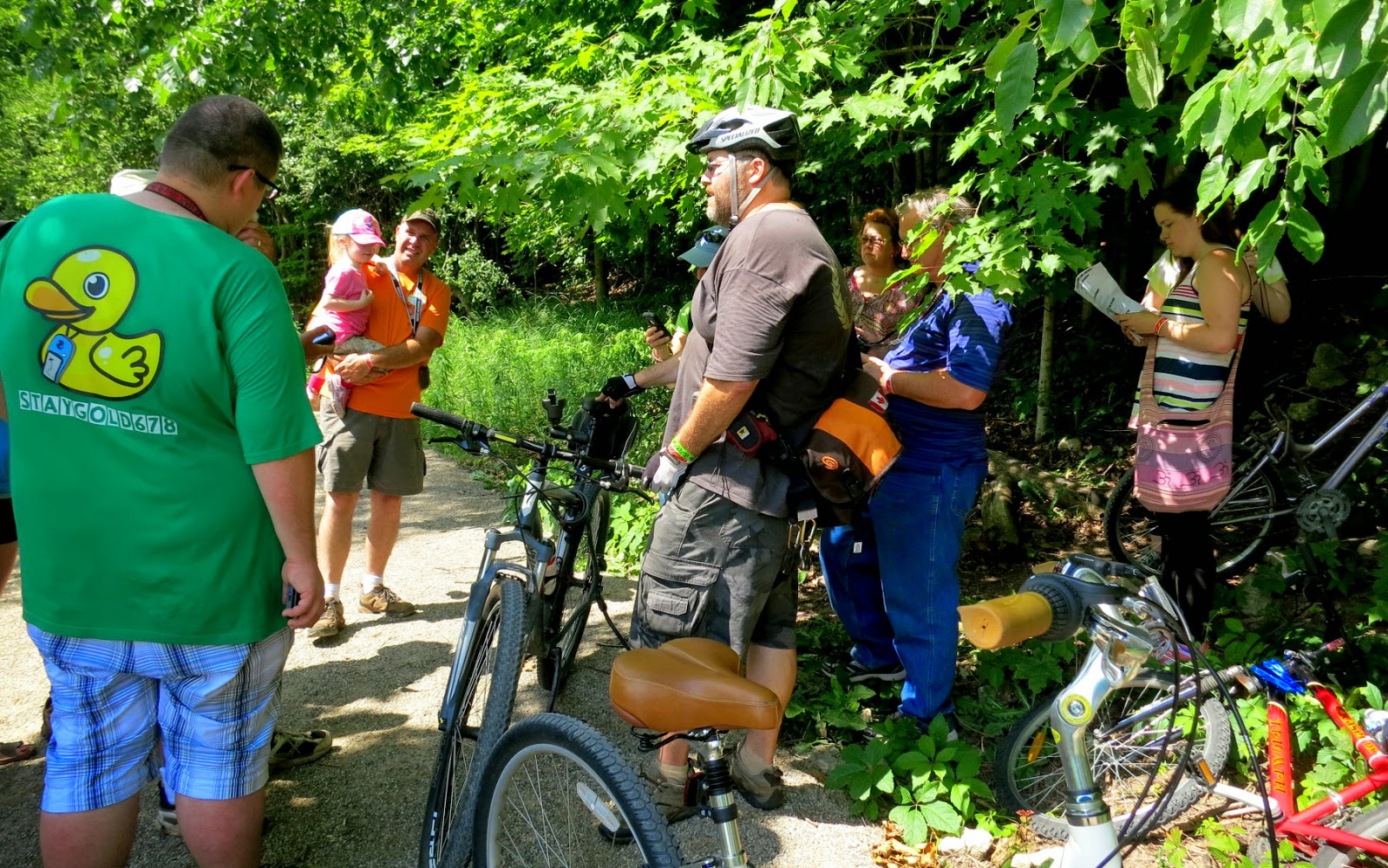 On the Sunday they held a CITO event, so I spent an hour picking up some trash to clean up the park - again using my bike to get out to the edges of the park quickly.  After the CITO I helped pack up the camp, then went caching for a few more hours.  We eventually headed back home at 2PM(ish).

This was a great Mega event.  A simple schedule, a great location, an awesome theme that was used very effectively, and a great deal of fun.  It was a perfect balance of socializing with fellow geocachers, and time to actually go out geocaching (which is, lets be honest, the whole point of the thing), all without feeling like I didn't miss out on any of the event activities.

All in all this weekend was, aggregately, the most enjoyable 48 hours of geocaching I have ever had. Many thanks to the organizers - they did a great job.

I am already looking forward to next year.

Posted by Dave DeBaeremaeker at 9:49 PM