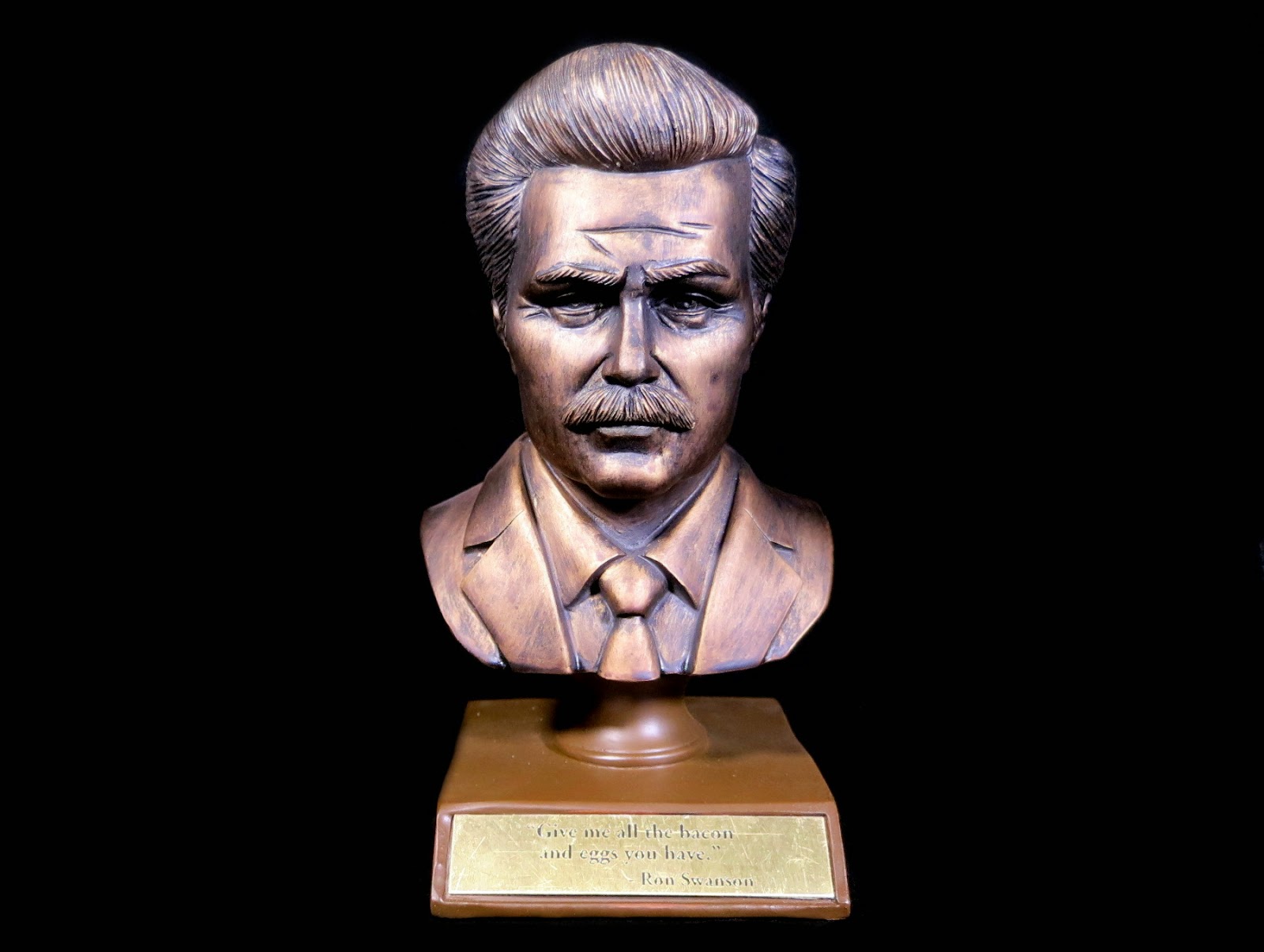 For the past month or so I have been binge watching the fabulous comedy show Parks And Recreation.

I have developed a man crush on one of the characters, Ron Swanson (played by the wonderful Nick Offerman). If you are familiar with the show you may understand why.  If not, he's a no-nonsense sort of fellow who tells it like it is, and enjoys the outdoors, and highly values his own privacy and solitude.  He also sports really smashing 'stache.

All of these things I also value.

I have purchased a bust of Mr. Swanson that will sit proudly on my "Shelf Of Awesome Stuff", along with some of my other trophies, including: my Lego Mars Rover, a Dukes Of Hazzard General Lee replica, Signal the Frog, An original Optimus Prime, and a skull of an animal that I found while geocaching.

Clear alcohols are for rich women on diets.
When I eat, it is the food that is scared.
Turkey can never beat cow.
It’s always a good idea to demonstrate to your coworkers that you are capable of withstanding a tremendous amount of pain.
Capitalism: God’s way of determining who is smart and who is poor.
Any dog under fifty pounds is a cat and cats are useless.
Fish, for sport only, not for meat. Fish meat is practically a vegetable.
Cultivating a manly musk puts opponent on notice.
Give a man a fish and feed him for a day. Don’t teach a man to fish and feed yourself. He’s a grown man. And fishing’s not that hard.
I’m a simple man. I like pretty, dark-haired women, and breakfast food.
Never half-ass two things. Whole-ass one thing.
Fishing relaxes me. It’s like yoga, except I still get to kill something.
Just give me all the bacon and eggs you have. Wait…wait. I worry what you just heard was: Give me a lot of bacon and eggs. What I said was: Give me all the bacon and eggs you have. Do you understand?
When people get a little too chummy with me I like to call them by the wrong name to let them know I don’t really care about them.
There’s only one thing I hate more than lying: skim milk. Which is water that’s lying about being milk.
Crying: acceptable at funerals and the Grand Canyon.
The less I know about other people’s affairs, the happier I am. I’m not interested in caring about people. I once worked with a guy for three years and never learned his name. Best friend I ever had. We still never talk sometimes.
Great job, everyone. The reception will be held in each of our individual houses, alone.
The key to burning an ex-wife effigy is to dip it in paraffin wax and then toss the flaming bottle of isopropyl alcohol from a safe distance. Do not stand too close when you light an ex-wife effigy.
Shorts over six inches are capri pants, shorts under six inches are European.
Friends: one to three is sufficient.
Honor: if you need it defined, you don’t have it.
One rage every three months is permitted. Try not to hurt anyone who doesn’t deserve it.
Strippers do nothing for me…but I will take a free breakfast buffet anytime, anyplace.
I like saying ‘No,’ it lowers their enthusiasm.

Posted by Dave DeBaeremaeker at 6:45 AM