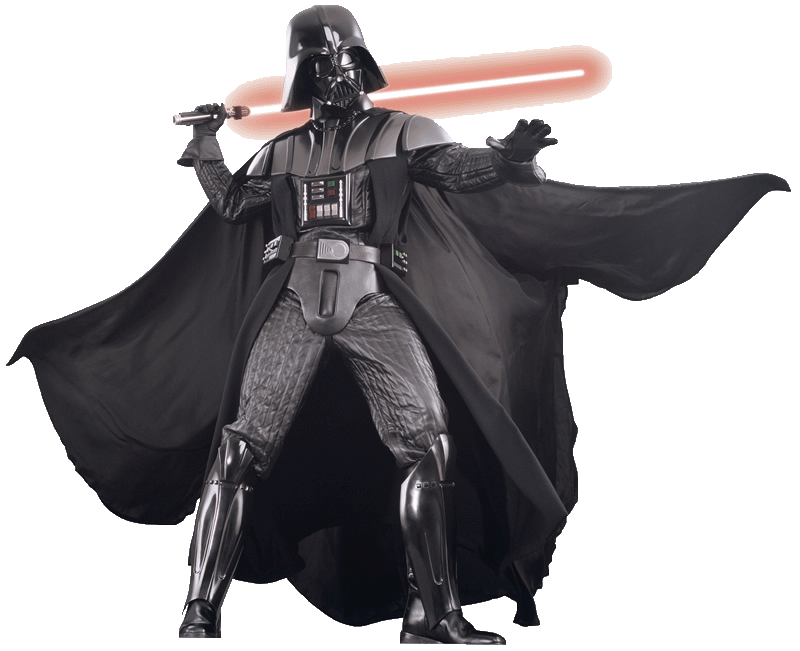 A long time ago, in the woods far away...

So begins the description of a difficulty 5, terrain 3.5 Star Wars themed night cache in Greensboro, North Carolina. That cache is called "Darkness Falls" (GC14WGB), and was the target of a group of geocaching friends last Saturday night.

If you are not familiar, a night cache is a geocache that is designed to only be found at night.  Typically at the posted coordinates are a series of reflective marker that are used to guide the geocacher to the cache itself.

This particular night cache is a 5 stage multi-cache, with each stage on a different section of trail, up to a half mile from parking, each parking spot being miles from each other, and using different takes on using the reflective markers in interesting ways to increase the difficulty of the hides.

Our group consisting of two members of Team Awesomesauce: hoosiersunshine and FailedApparatus, and two other cachers from South Carolina: MSWahoo and the C from C&S 143, met at the parking coordinates for the first cache just after night fell, which on Saturday was around 6:15PM.

From there we hiked down a dark path to the coordinates of the first stage. Once there we looked around for the tell tale markers that gave away the cache position. 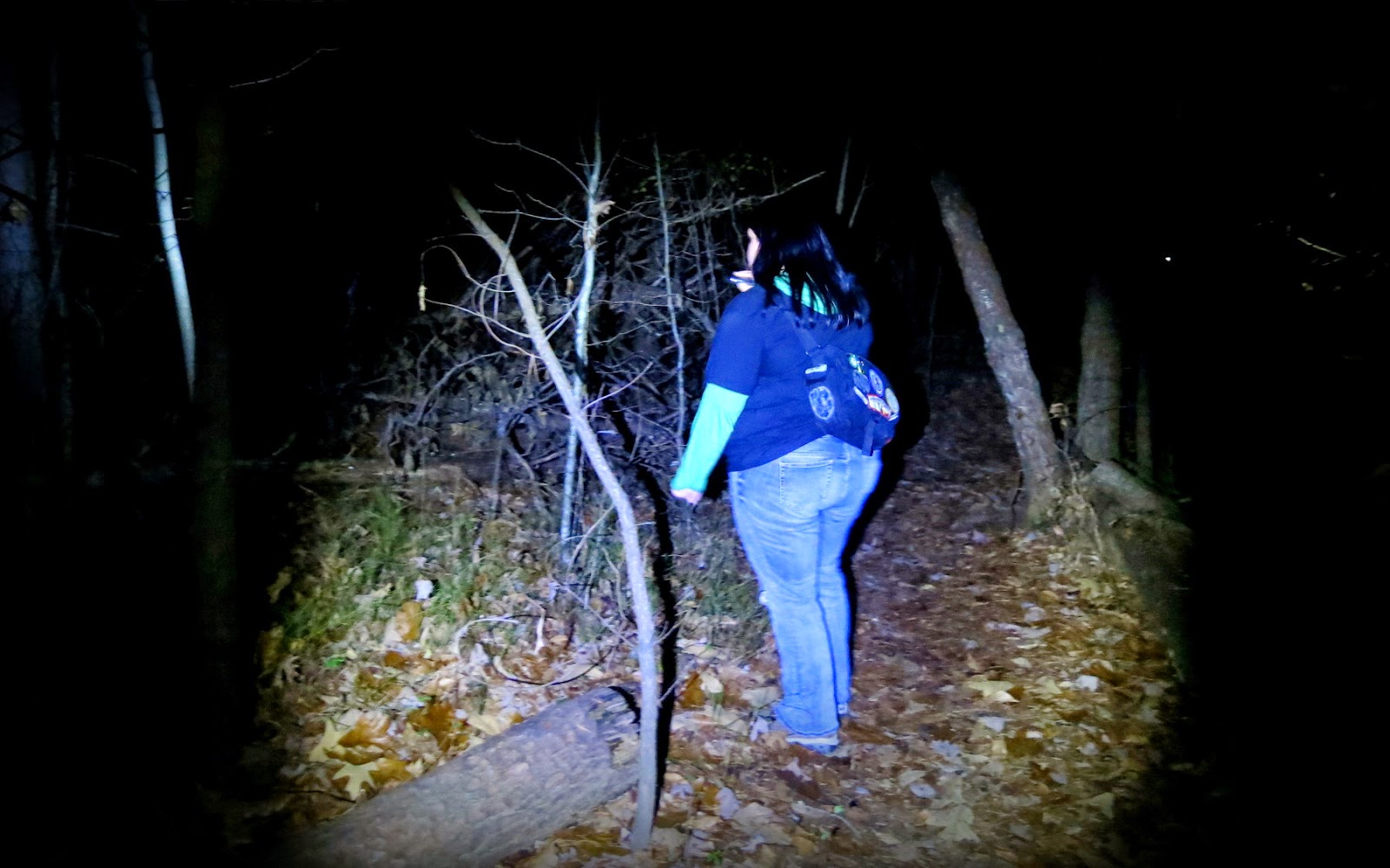 When we found the container for the first stage, it contained a clue on how to open the final container, as well as the coordinates for the next stage.  Each stage would be a mile or so away from the next, so we hiked back to the cars, drove to the next parking area, then hiked back into a different set of woods for the next stage.  Each stage seemed to be a longer hike, and a trickier hide.

Once we got to the coords, we'd begin looking for the reflective markers, and hunt down that stages container, in which contained coordinates for the next stage. 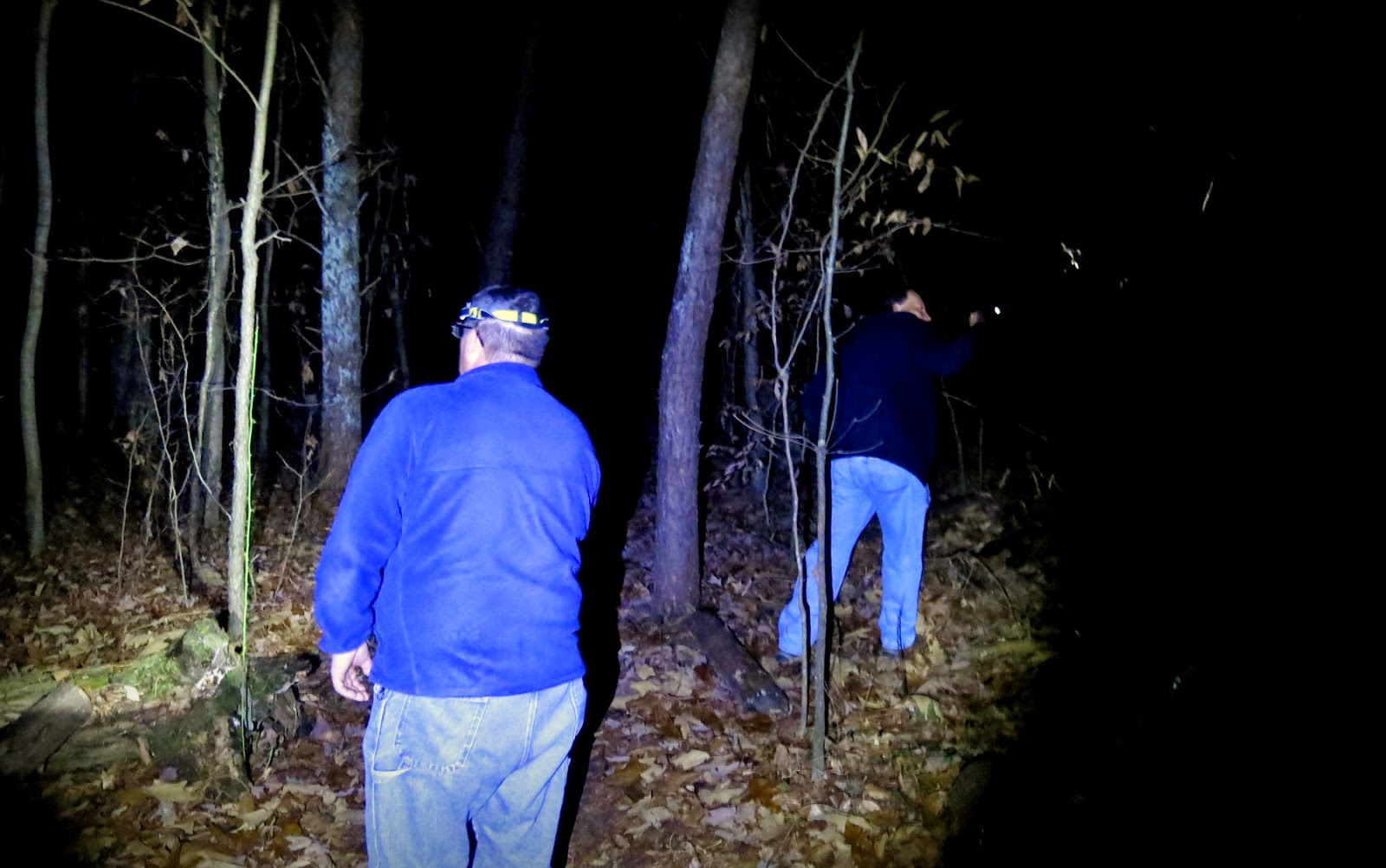 You may wonder what these markers look like. The next photo has a picture of two of them on a tree (a white square, and a yellow circle).  The markers are not large, and do not reflect a lot of light, so they were difficult to spot at times. 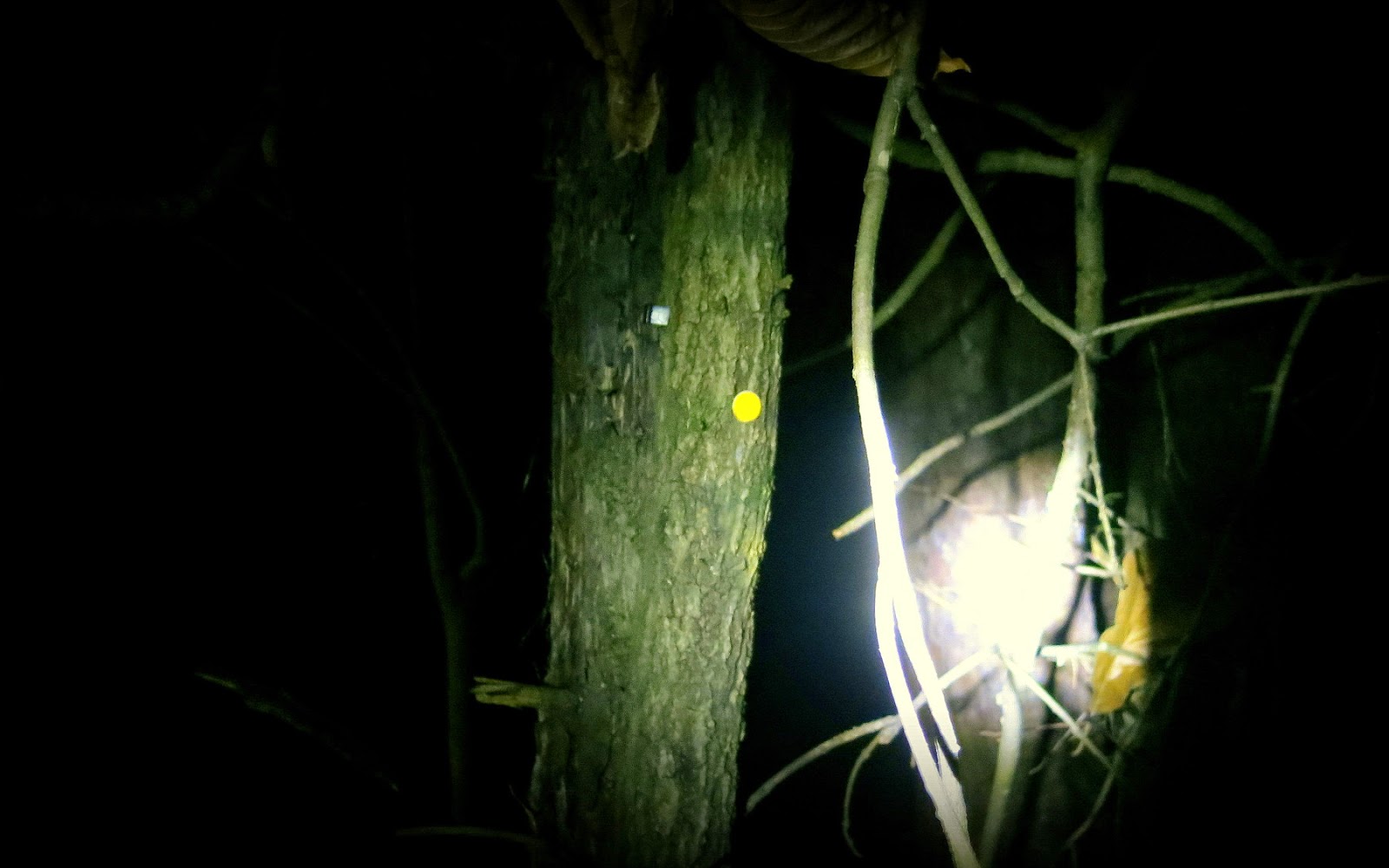 The last time I was in Ontario I bought a 3-in-1 flashlight from Cache At Night that alternates between a normal light, a UV light, and a laser.  I tried all the options on the tags.  The picture above with the markers is how they look with the normal light.  The UV light did not seem to reflect anything at all, so no pictures.  The following is the reflected laser light. 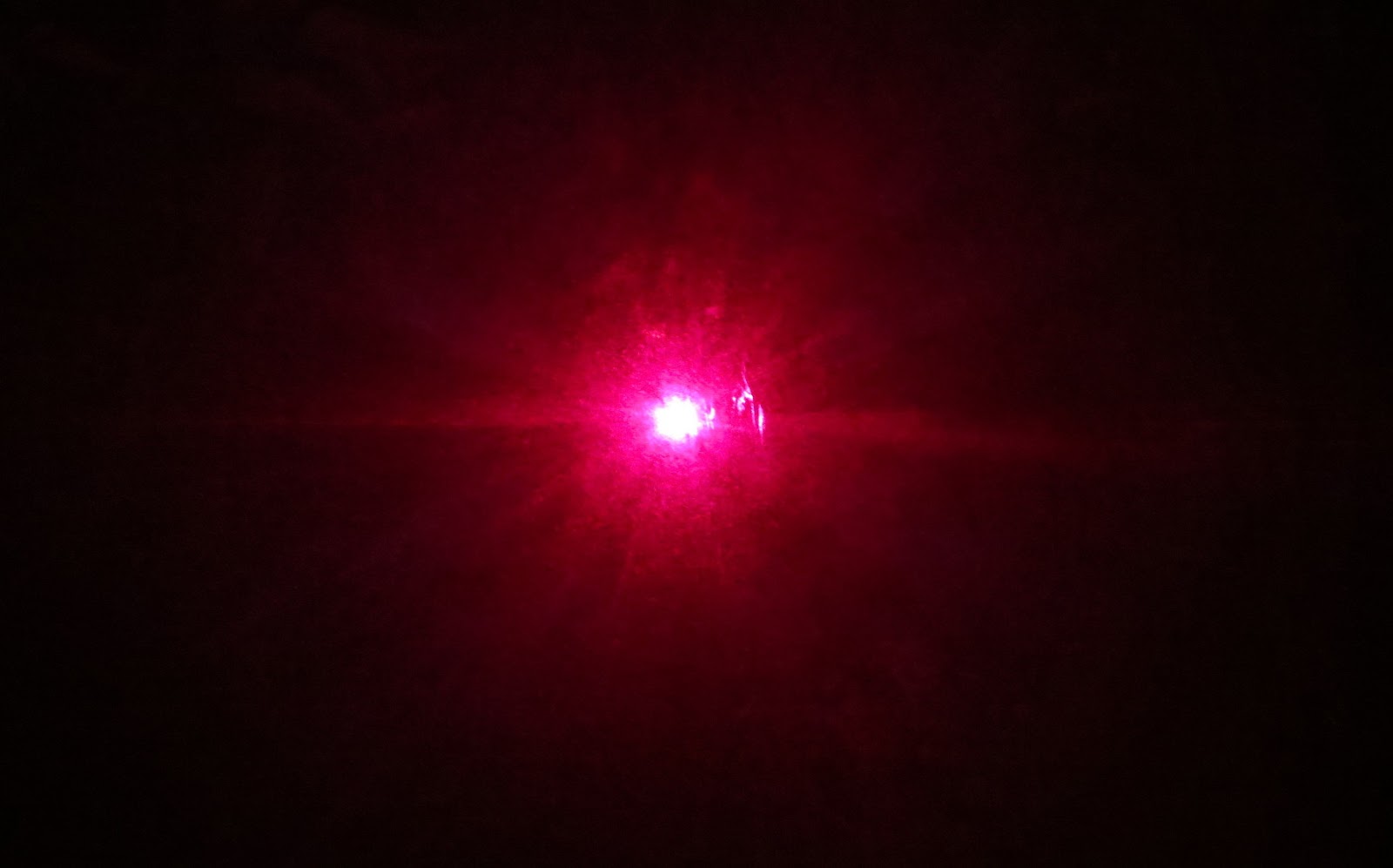 The third and fourth stages were far enough into the woods that there were several caches between parking and our target GZ, so we naturally grabbed those as we passed by them.  MSWahoo was particularly good at finding them. 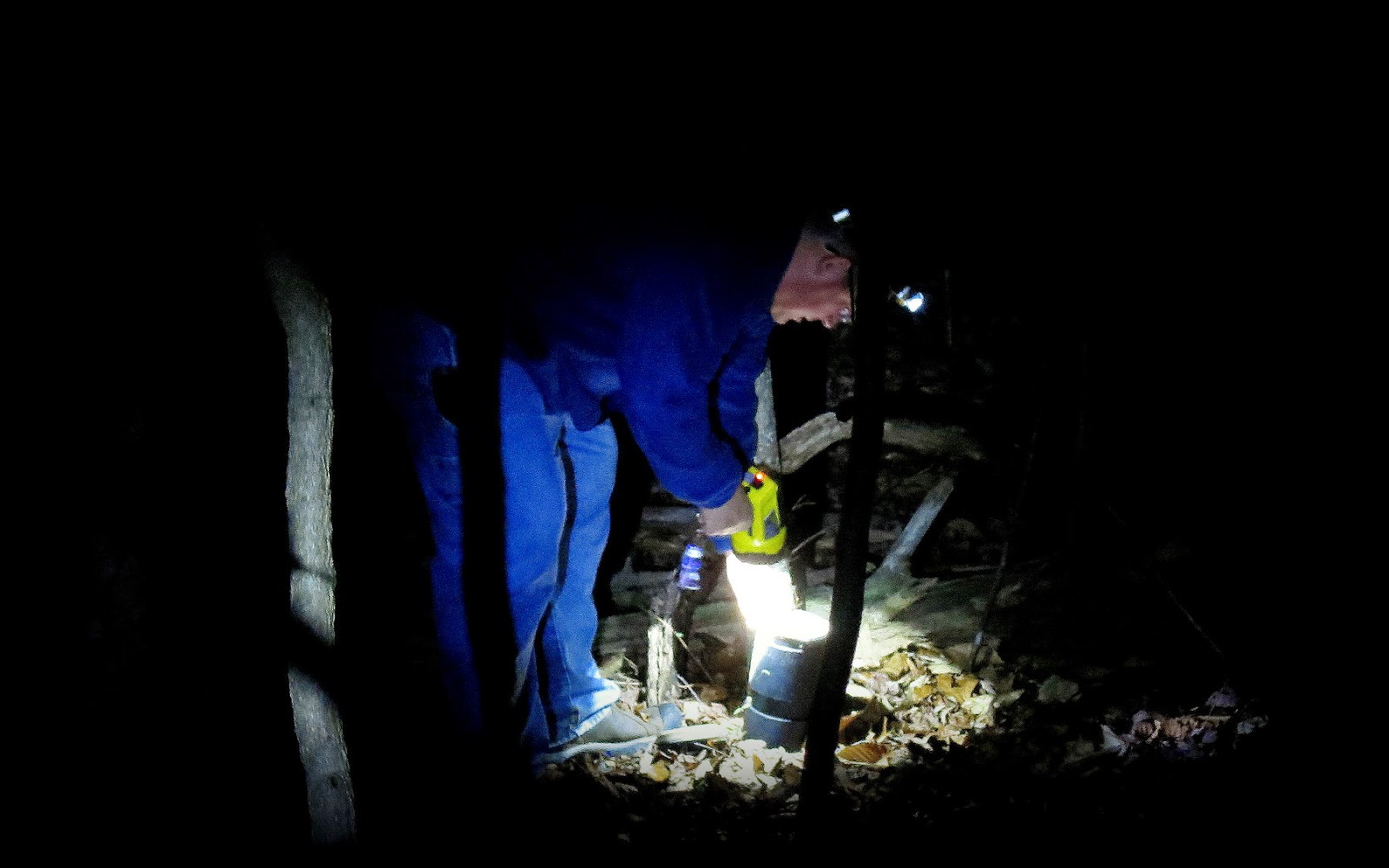 You may think that a bunch of folks running around the woods at night would cause some attention from the locals. You would not be surprised, then, to find out that as we prepared to enter the trail for the fourth stage that a police car rolled up behind us.

A pair of cops came up and asked us what we were doing. As soon as FailedApparatus said "geocaching", a wave of relief seemed to come over the younger officers face (the older one needed some explaining to know what geocaching is, but seemed cool with the idea as a whole).  We were then given the standard cop warning of "be careful out there", and then we headed off down the trail.

A few minutes later we had the cache in hand, and the coordinates to the final.  It looks like hoosiersunshine is signing a log, but she's actually reading out the coordinates. 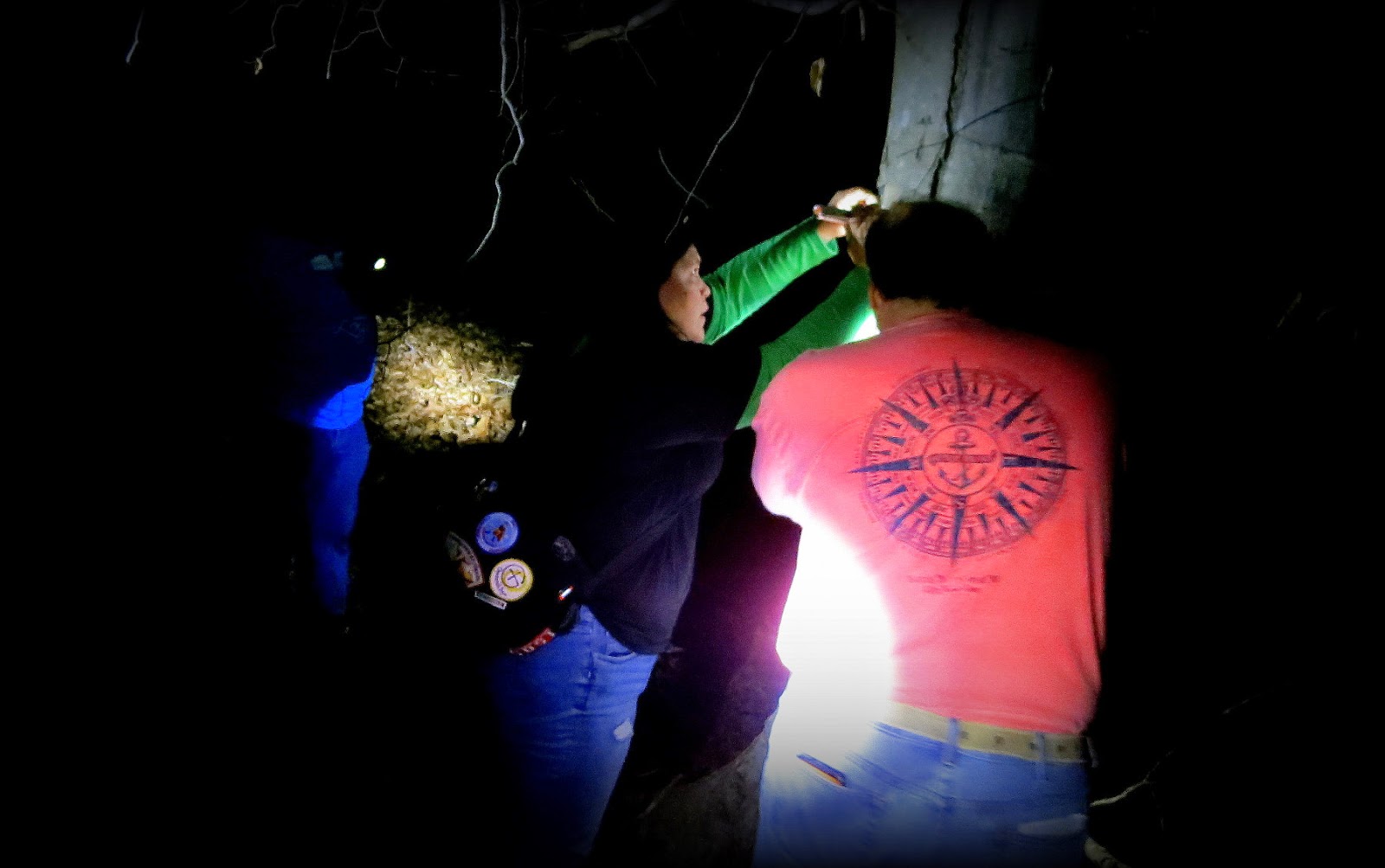 So far, at each stage, the coordinates brought us to a place where we found reflective markers to guide us in.  We were, therefore, a bit surprised when we got to the coordinates for the final stage and we found no reflectors.  We also had to bushwhack off the trail farther than we had for the other stages.

We fanned out, looking for reflectors that the description said would be there, and double checking we had the right coordinates (a great reason to take pictures at each stage so you do not need to double back to get the information again).  Nothing seemed to work.

After about 15 minutes the rest of the group had seemed to wander back towards the direction we came from.  I decided to cast my attention a bit farther afield, playing my flashlight all over the place. I finally decided to use my geosense and headed over to a series of fallen logs, when my flashlight revealed a wonderful sight.

"Hey, there is an ammo can over here!" I called out. 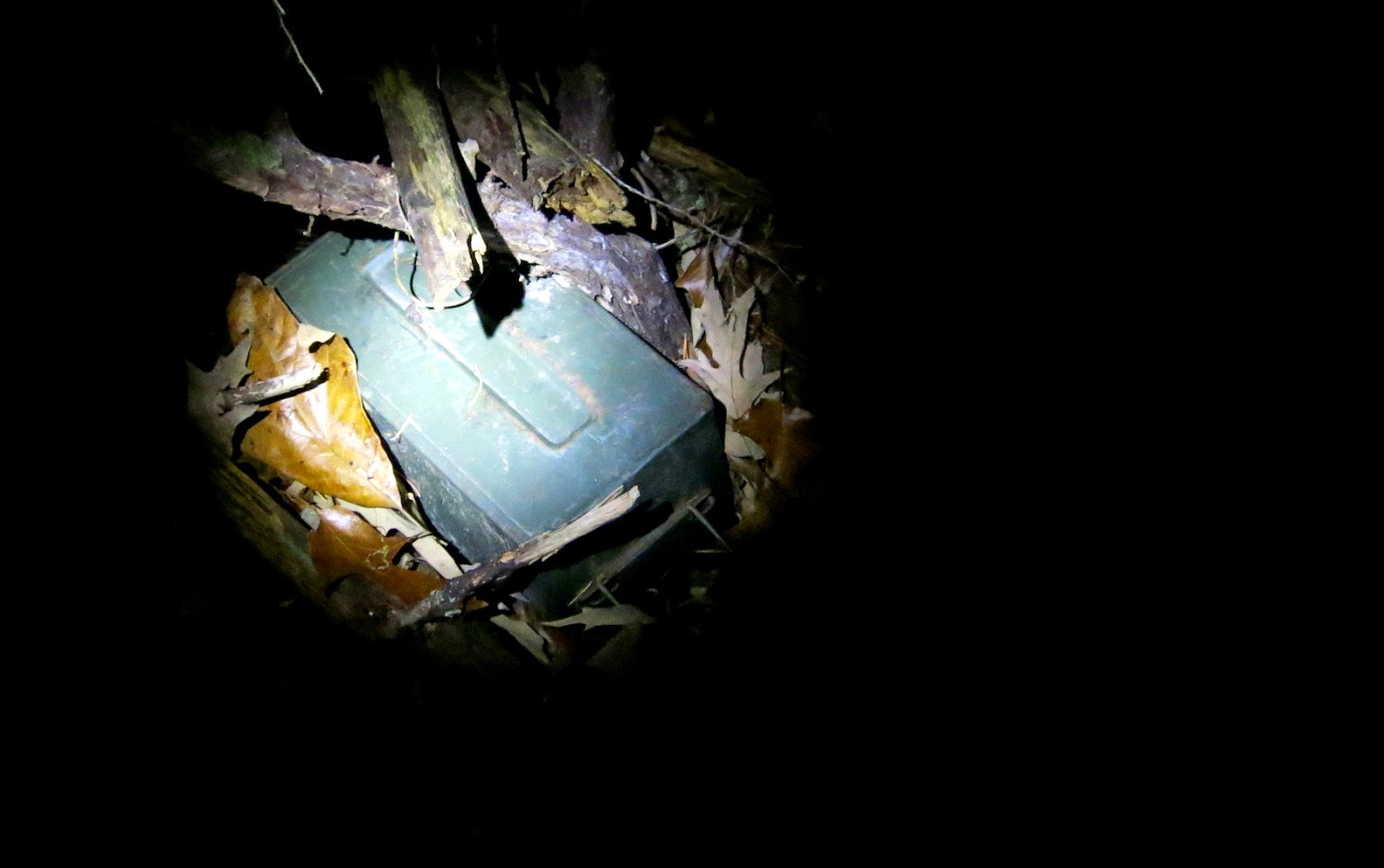 Up to this point I was not having a super awesome cache find evening.  In the 3 hours it took us to do this cache, I had not found any caches in the dark, nor been the one to find any of the reflective markers. Everyone else seemed to have had a find, but I was striking zero the whole time.  So I was relieved to open up that ammo can and confirm that, yes indeed, I had found the final for Darkness Falls. 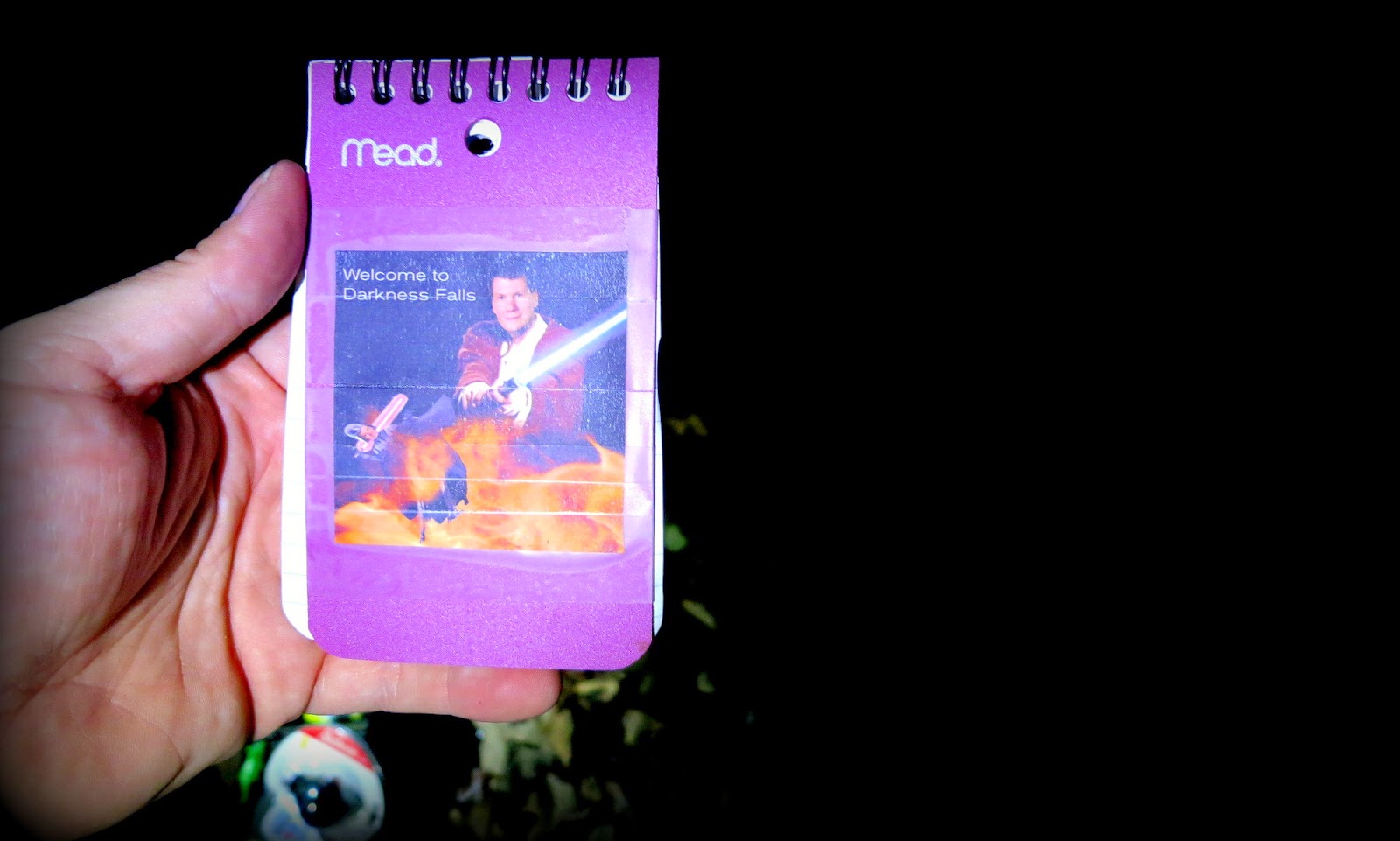 Satisified with our caching victory, we all hiked back to the parking area. This cache proved to be more physically difficult than I expected, with an estimated 2 miles of walking in the dark, tripping on tree roots and such - all that on top of an already grueling bike'n'hike (see yesterdays post) I had earlier that day.  This is all to explain why my 'hike' was more of a pitiful stumble (think Frodo walking through Mordor to get an idea of the level of patheticness in which I shuffled my feet down the trail).

Once at the cars, we headed off to the nearest restaurant that was still open (It was almost 10PM at this point), which turned out to be a Longhorn Steakhouse. 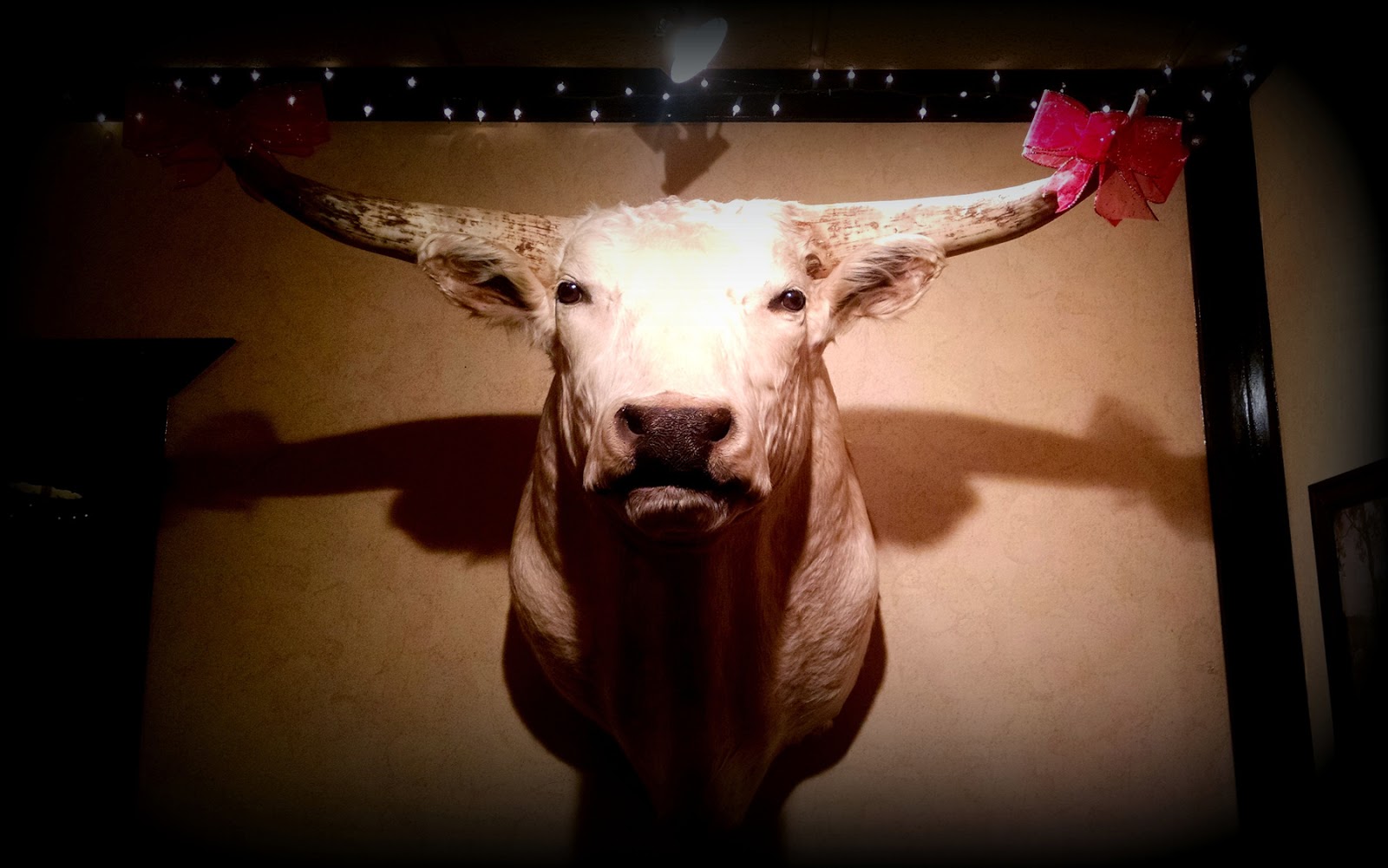 After consuming the delicious flesh of the bovine, and a crackin' good parmesan mushroom risotto, I drove the 2-ish hours home.  It was 1:30AM before my head finally hit the pillow, and I was a walking zombie the next day, but dang it all, it was worth it for having had such an awesome geocache experience.
Posted by Dave DeBaeremaeker at 9:52 PM