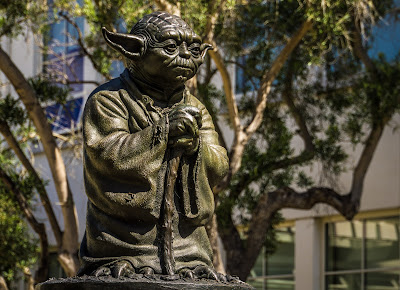 So the past two posts have been a series on my adventures exploring San Francisco a little while ago.

When last we left I had finished unexpectedly exploring Golden Gate Bridge, while taking a tour bus around San Francisco, checking off sights, landmarks, and geocaches, from a pre-planed list of things to check out.

Todays adventure finds me back on script.  The plan is to check out a cool Yoda statue, then walk thru Golden Gate park to the pacific coast, then head north to Baker Beach to catch a sunset shot of Golden Gate Bridge.

So off I went.  I started by hitting up the Yoda statue. That statue also happens to be the first stage of a really well done multi cache, so I knocked that sucker off my list too.

Then I headed across the road to the Palace of Fine Arts, which is a cool greco-roman style structure made for the 1915 Panama-Pacific expedition, and looks thusly: 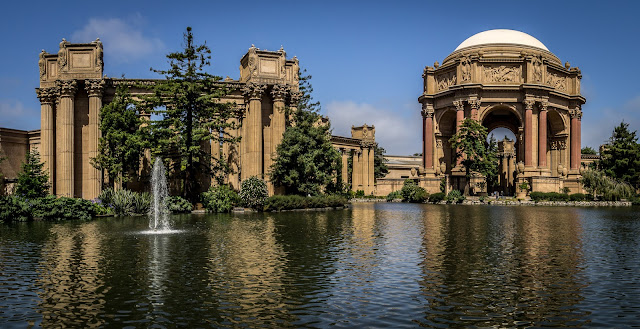 Having checked that out, I headed to the eastern edge of Golden Gate park, and started walking the few miles westward toward the coast.

I was actually thoroughly unimpressed with the park. I was expecting something like Central Park in NYC, but really its a hot mess of bleh, with most of the things I wanted to see requiring fees, which pissed me off, so I avoided em in disgust. I don't mind paying an entrance fee from time to time (after all that bus tour cost me $60) but I hate being nickled and dimed - it displeases me much.)  I missed a few photo ops, but with all the tourists around I'd likely not get decent shots anyway.  Anyhoo...

So I basically walked on thru. I did come across this gay pride flag waving thing-a-ma-jig. 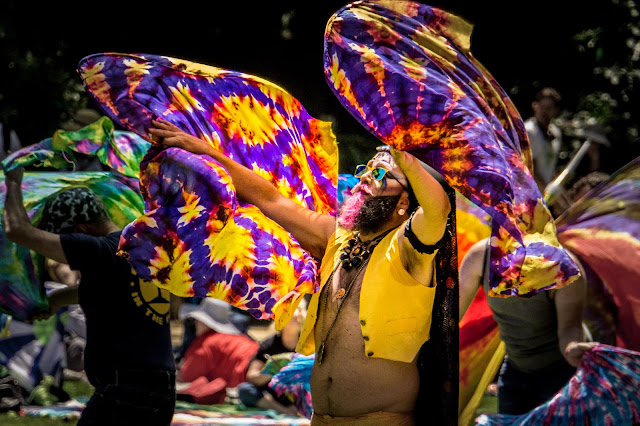 Say what you will about the LGBT community, but you gotta admit they brighten up the place.

Along the way I also saw a cool Japanese pagoda type deal. 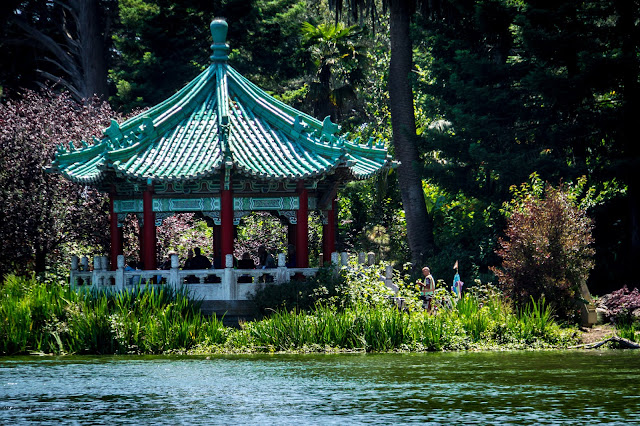 They even had a couple dutch looking windmills. 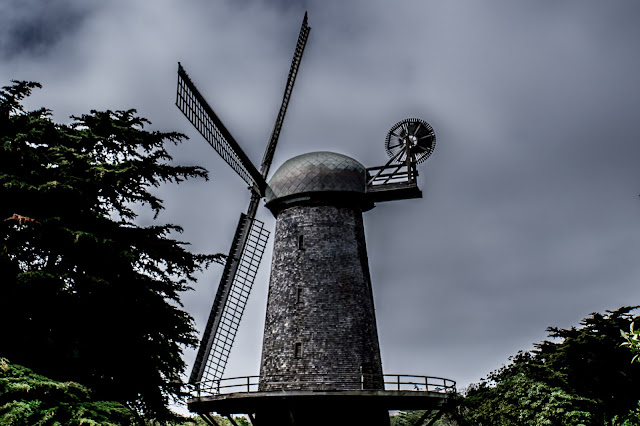 When I finally got to the coast, I took a break at the visitors center.

At this point in the day I had walked about 5 miles.  5 miles is just over half my record for longest distance on foot in a given day.  Add this to all the walking I did yesterday and you can imagine I was due for a rest.

However I had a goal, and this was only half way, so after a few minutes (and a well placed virtual cache), I was back on go, this time heading north along the coast. Ocean on one side, and town houses on the other. 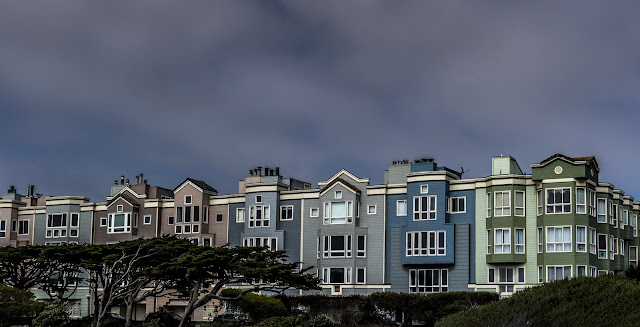 About a mile down the road I arrived at the Sutro Baths.

These baths opened in 1896 as the worlds largest swimming pool establishment.  It was a massive complex of pools. spas, towering glass roofs, and a crackin' good view of the ocean.  It burned down in the 1960s, leaving a busted foundation behind.  It looks like this now: 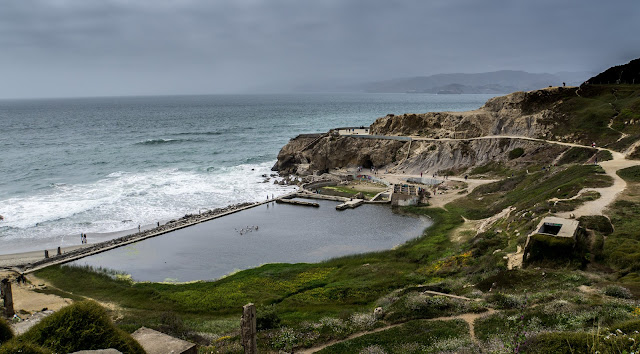 After hiking down to the ruins to check things out, and climbing back up, I continued on my way to my goal.  This whole area is a National Park, so I was treated to some nicely groomed trails, and some more crackin' good views. 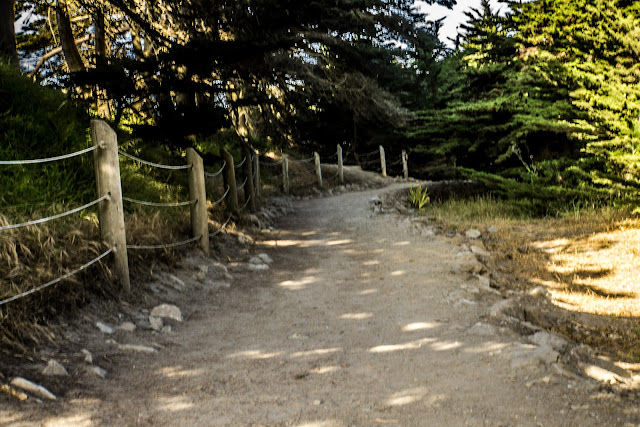 I hiked the 1.5 miles or so to the end of the park, then kept walking thru some expensive looking neighbourhoods (I bet this view adds about $500K to the price of these houses). 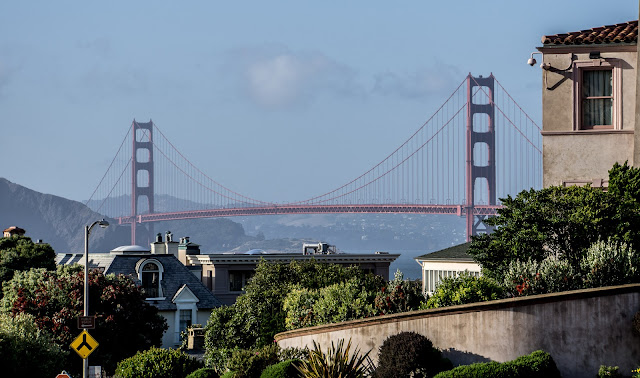 A mile of suburban sidewalks, and a half mile trudge along a rather soft sand of Baker Beach, and I had hit my goal: an amazeballs view of the Golden Gate Bridge - right around sunset too. 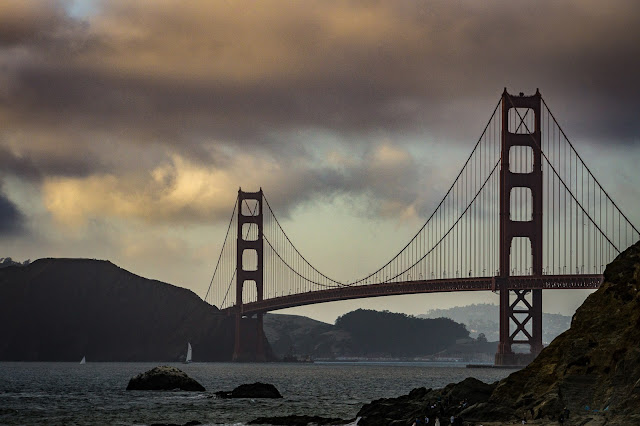 Getting this shot took a lot longer than I expected as the rocks were crawling with stoners and other nefarious looking yoots (as well as some upstanding looking yoots, to be honest).  But I got my shot.

Then I stumbled (I was definitely at the stumbling stage at this point) back down the beach to the closest bus stop, and took public transit back to my hotel.

I was sore, I was tired, I was hungry (I ordered room service as soon as I hit the hotel), but dang it, I got the shot.

It was worth every step.
Posted by Dave DeBaeremaeker at 9:28 PM