Backyard Bounty Brought Me The Great One

This is a story of Netflix, nostalgia, and hockey. Hold on to your butts, it's gonna be a ride.

Not a wild one... not even an interesting one... but a ride.  Keep your arms inside the bus at all times.

So 6 months or so ago my wife stumbled across a show on Netflix called Backyard Bounty.  Which is an American Pickers style show where a couple dudes wander the countryside in search of found treasures in old barns, garages, and various hobo infested places of the world.  The boys from Backyard Bounty do their hunting in Ontario (which, being Canadian expats, is the first wave of nostalgia).

One of the guys from the show has a store in Ingersol Ontario.  When I was recently back up in the Great White North I found myself with a few hours to kill, so I went on a road trip (90 minutes from where I was based) to check out the store:  Modern Hipster Antiques.

I'm not much of an antique guy, so I didn't expect to find a lot.  The store does have quite a bit in it, and its worth the stop by if you're in the area, but it wasn't really fueling my lust for objects. Then I looked in the last display case in the store.

I stopped suddenly. A twinkle in my eye... nay, a gleam.  Heck, a beam of freakin' light shone forth, for what presented itself upon my vision  was no less than The Great One?

No.  The actual Great One:  Wayne Gretzky.  Well, his hockey card at least.

The 1984-85 season no less - the team that was recently voted the best team in the history of the NHL.

So backing the bus up a bit... when I was but a wee lad - grade one/two-ish,  I watched a lot of hockey, and my team of choice was the Edmonton Oilers.   Many evenings my dad and I would walk, - nay, this was Canada in winter... we trudged - thru the snow to the local convenience store to pick up a pack of hockey cards.  Over the season I collected every single Oiler there was... except Wayne Gretzky.

Time after time I lovingly looked thru my ever expanding deck of collected cards, reading every stat of every Oiler, except the stats of the Great One.

Until...the very last pack of the season. With the Oilers in the finals I eagerly cracked open that last pack of cards to fine... 3 Wayne Gretzkys!

Now.  I was in grade one/two-ish, so naturally I lost all those cards... but now, in the case in front of me, I could obtain the holy grail from  my youth. The card of the best hockey player in the history of the world, and my childhood hero: Wayne frickin' Gretzky.

But now I had the chance to grab hold of some serious childhood memories and hold it as my very own... this is the heavy nostalgia stuff.

It may not surprise you to learn that I immediately bought the card. Here it is: 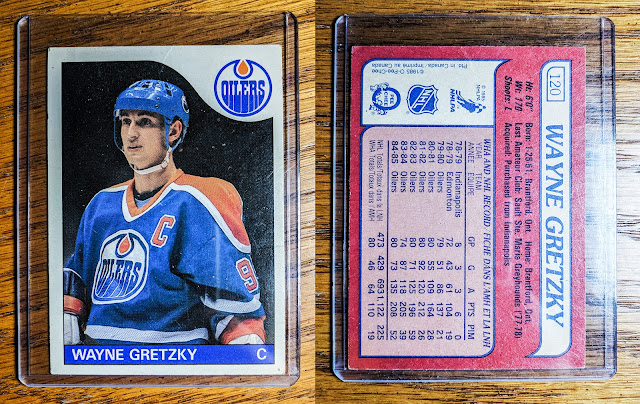 And thus ends the story.
Posted by Dave DeBaeremaeker at 8:17 PM