A Day In Lucerne 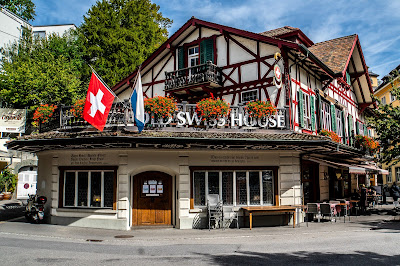 A few months ago I was on a work trip to Switzerland.  I had a couple off days, so I decided to spend one of them checking out Lucerne.

This is a few moments that happened during that day.

Lucerne is a relatively short 45 minute train ride away from Zurich.  I took my time to get there, and spent the morning around the lake, and playing with the local swans.

After lunch I headed over to check out some of the history of this ancient town.  Starting with the Lion of Lucerne.  The lion is a relief carved in stone, with a nice pond in front of it.  It was carved in 1820, and is a monument to a massacre of Swiss troops during the French revolution in 1792. 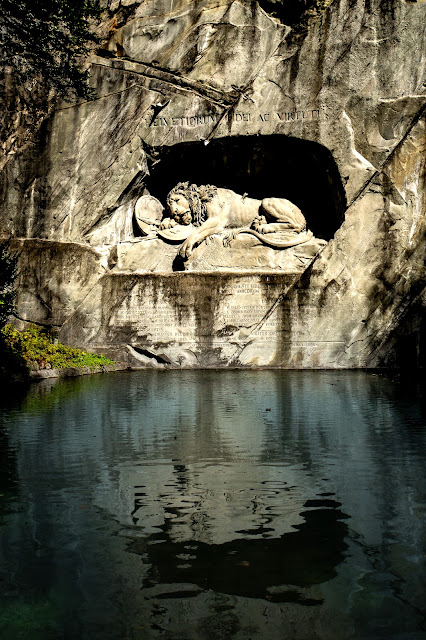 Lucerne is infected with a lot of tour busses, and therefore crowds.   I spent a good 30 minutes at the monument, during which time 4 busses of tourists came thru.  Bus tours are the worst.

However they didn't keep me from finding my first geocache of my trip. I don't cache much anymore, but when I am at a cool location like this I get inspired to pull out the Geocaching app and see what is near by.  In this case there was a cache in the woods right at the edge of the monument. 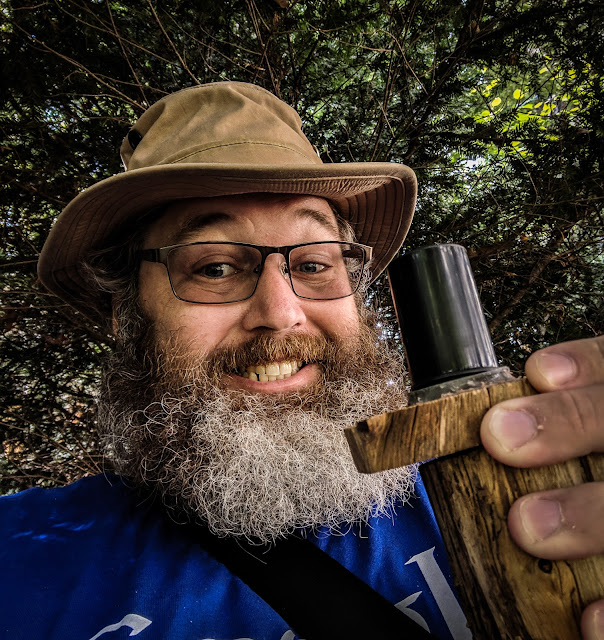 After communing with the lion, I walked along the Musegg wall, which is a section of wall from medieval times, 1386.  This is the thing I love about Europe - nothing in North America is anywhere near this old. 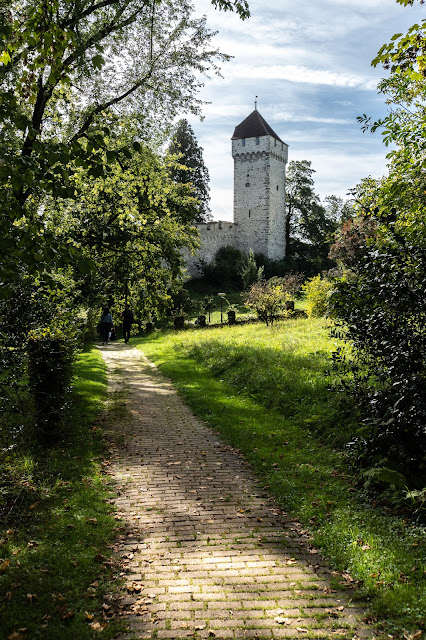 The far end of the wall leads to a walk along the Reuss River, and more of the ancient architecture of the town. 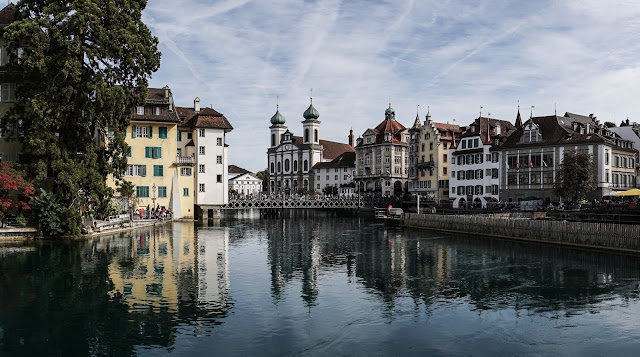 I found a nice place along the river to grab a beer, sit back, and enjoy the town as it past me by.  Highly relaxing way to go - I recommend it as a strategy. 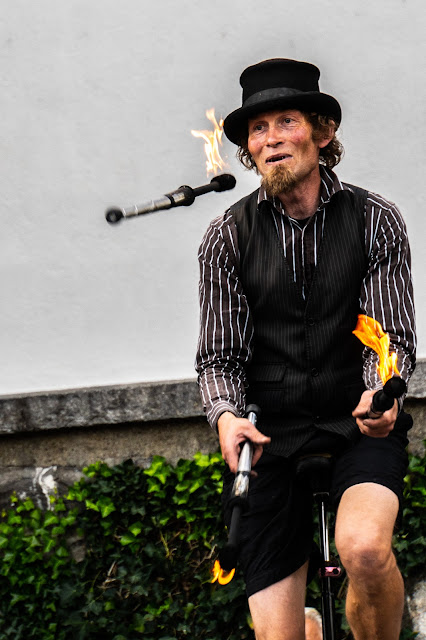 I then crossed Kappelbrucke, and spotted this perfectly lit tourist posing for her friend.  I sniped a photo.  This isn't remarkable in any way except it serves as a reminder that shortly afterwards I became a Lucerne Tourist Attraction. 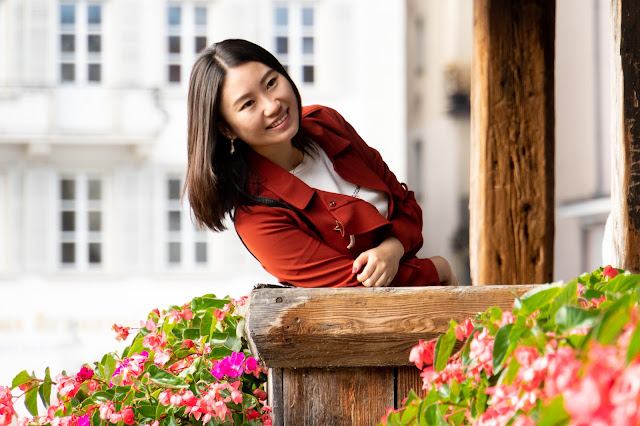 I went to walk past them, but they waved me over.  Before I knew it I was a part of a large group photo of tourists.  Then they switched out and I was included in another photo.  Finally I had my photo taken with the  gentleman who first took my picture.

There was much laughing, and good times.  I seemed to be a hit.  I just imagine that family talking about that large Swiss man they met, not knowing I am a fraud (from a Swiss perspective - I am legitimately large).

So back to Kappelbrucke.  In english it is known as Chapel Bridge.  It is a rather long wooden pedestrian bridge  - seveal hundred feet across the Ruess River.  Along the way are dozens of religious themed paintings so passerby's will spend time contemplating their eternal souls whilst they cross the river.

Now its a tourist attraction.  Mind you, a very pretty one. 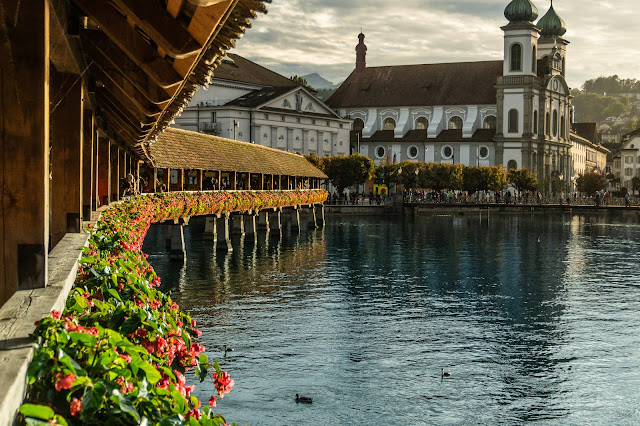 Around this time a co-worker, who went off on a hike that day, was passing thru Lucerne on his way back to Zurich, so he stopped by and we spend some time exploring the city together.  Joel is the photographer in this photo. 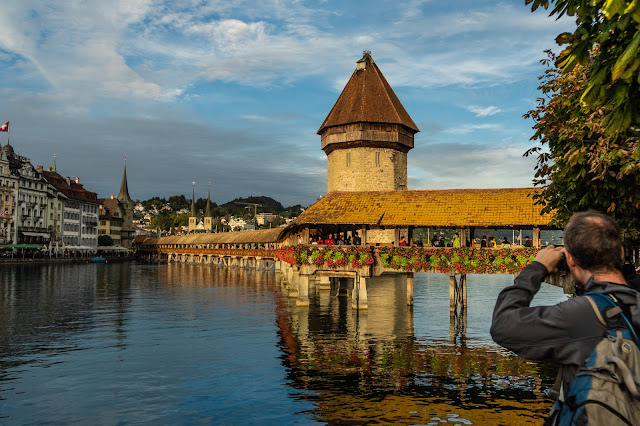 Shortly after that we headed off for supper, then got on a train back to Zurich.

Lucerne is a nice town, and I hope to make it back here some day.
Posted by Dave DeBaeremaeker at 9:16 PM