The 31st round of the Photography Scavenger Hunt is upon us.  This is my BTS for the word "Fairy Tale."

When I first saw this word I knew I was able to come up with something.  There are so many fairy tales, and so many takes on them, both modern and ancient, that something had to stick.  However the problem with things like this is that one gets spoiled with choice, and settling on a single concept is harder than it seems.

I was searching the Internet one evening looking for models to print with my 3D printer.  I came across a rather detailed model of Pinocchio, that plucky puppet with a heart of gold and a nose for the lack of truth.   I decided I'd grab the model and print him off as he seemed like a decent fit for the category of "fairy tale".

[not pictured:  Pinocchio being printed on my 3D printer]

I still needed to put Pinocchio into a scene.  I've never really watched the movie (just enough to know it gets *really* dark and an LSD trippy half way through).  But the scene that comes to mind is Geppetto making the damnable psycho-puppet in his workshop.

I decided to use Deadpool as a Geppetto stand-in, cause, you know... Deadpool.

Of course Deadpool isn't going to paint up a puppet as a normal version so I decided to make a Deadpool painting a Deadpool puppet.  The model has Pinocchio wearing a hat, but I decided to cut it off, and use some wood putty to recreate the top of his head (including that thing that sticks out the back of his mask) 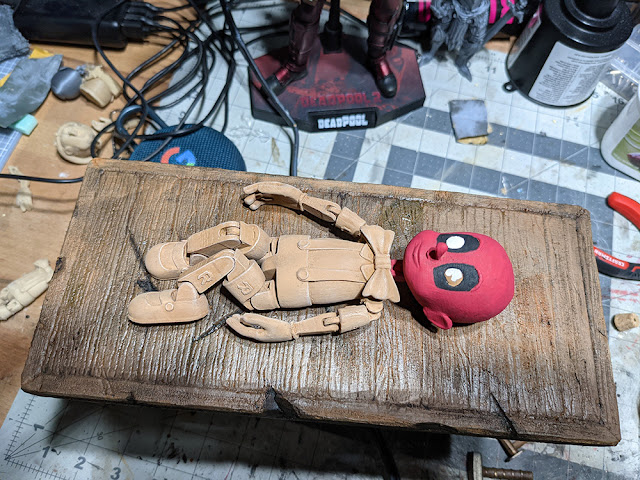 I needed some props for the workshop, so I made a work bench (the one Pinocchio-pool is lying on above) out of XPS foam.  I also printed some tools on the 3D printer, then painted them all up. 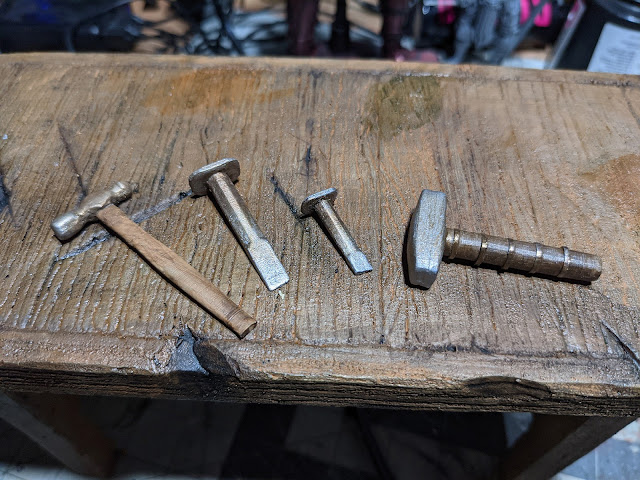 I also needed a paint brush, which is simply a real brush cut short.  I also used some prop jars to make some old paint containers, filled with actual paint (extra points for thinking inside-the-box on that one. I'm clever that way).

Then I set up the scene, using the same brick wall from "ink", and a Lume Cube panel for light.  I decided to use the Wade Wilson head for Deadpool, as its hard to see out of those masks, and he is doing some detailed work. 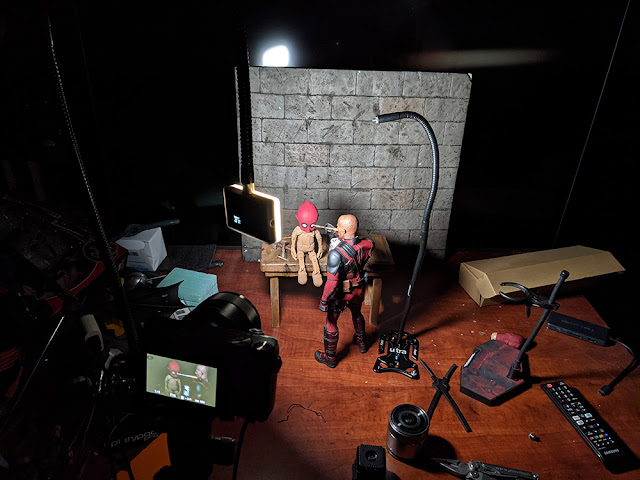 The final image is what you see here.  It turned out pretty much as I envisioned in my head. 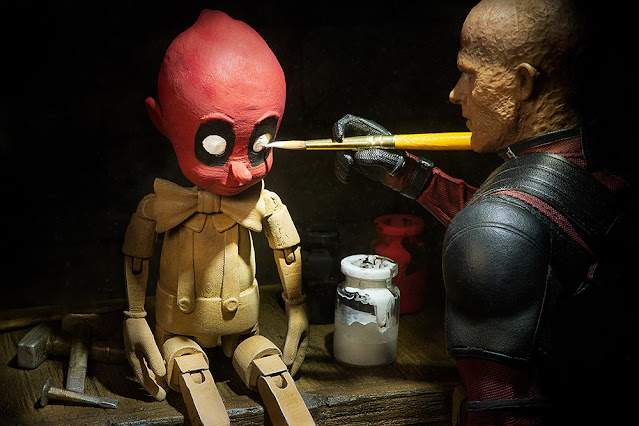 Posted by Dave DeBaeremaeker at 3:21 PM