Further adventures on the far side of the world. Episode III: Danshui

A bunch of us went to Danshui, which is located just north of Taipei, where the Danshui river meets the Ocean (really, the Tiawan Straight, but why split hairs, eh?). There is a walkway with a quasi-carnival atmosphere with street vendors & performers (all music), and some restaurants. 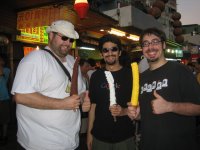 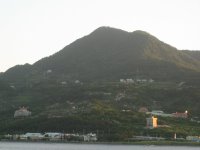 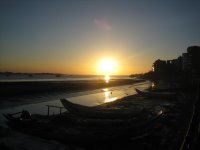 We all got 2ft (well, 55cm) ice cream cones - just cause its, ya know, 2ft of ice cream. It was freaking hot so we had a hard time eating the icecream before it melted. We ended up being quite the spectacle with the locals, but I chose not to take offense when they referred to us as "americans". 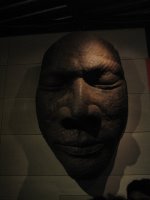 The location is fairly pretty, with mountains in the background, and many boats in the river. The walkway went on for many kilometers, but we only walked about half way. We stopped at a bar for drinks. This bar had some cool sculptures made out of squares of metal, the face being the coolest.
Posted by Dave DeBaeremaeker at 1:56 AM