Geeks Expatria (aka adventures in Taiwan)

So, since we last blogged together (I writing, you reading), I have returned to Taiwan for another 3 week stay for work.

I won't discuss my work (those of you who had read my old site would recall that the first 3 rules of working for Google is... you don't talk about working for Google). The mere fact that I mentioned who I work for is grounds for killing you if it was not for the fact that a) our corporate motto is "do no evil", and b) I just showered and don't want to break a sweat.

So, instead of waxing confidential about my employ, I shall attempt to share some experiences I have had during the last couple of days. I include pictures(duh!) for the visually stimulated. 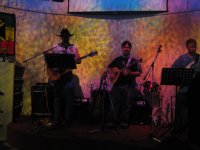 So last night I, and the rest of the clan here, went to a local expat(aka American style) bar called Azul's, to see a guy named Landis perform country music. It was not bad considering that the entire band are amateur musicians. The guy playing the bazuki is one of the G clan. 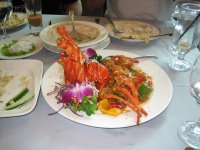 This afternoon, we took a trip to Taipei. We had some Thai food at a restaurant called "Crystal Spoon" in Taipei 101, where we dined on shrimp, lobster, chicken, beef, and (not surprising) rice. 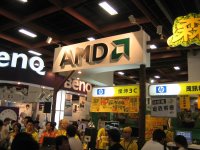 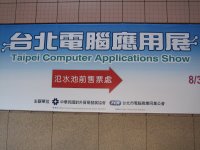 We then headed to a computer convention. There were a lot of vendor booths, and some interesting technology to look at. Because I was familiar with all of the technology, but everything was in Chinese, I have never felt both in my element and out of my element at the same time. A very odd feeling.

Anyways, this are the adventures of Dave over the past 24hrs on the otherside of the planet.

Cheers
Posted by Dave DeBaeremaeker at 9:34 AM