My wife has left me.

Don't worry. She will be back :)  She has gone on a womens retreat and has left Zeke and I back at home from Friday afternoon to Sunday afternoon.  Since this is, by far, the longest I have been left alone with Zeke  - Mommy has never spent the night away from us before - I decided to record the event in pictures...

... unfortunately I decided this after Zeke went to bed Friday night, so I didn't document the first part of our weekend, which was a trip to Lowes Hardware store.  At first he didn't want to go inside, but after a bit of explaining, and bribing with a magnet, he got into the swing of things and enjoyed walking around the place, especially playing with the pipe connectors in the plumbing section.  He was very well behaved, and even went and sat by himself on a bench while Daddy was paying for our new found goods (parts for a new cache).

The rest of the evening went by without any significant incidents, so we start our photography journey first thing Saturday morning... 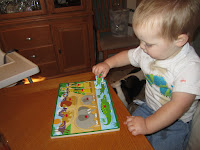 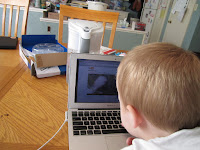 It was cold when we woke up - 32f -  so I wasn't overly concerned about getting an early start on our outdoor adventures  so we spent some time playing with puzzles and watching Youtube videos.

At 10 am I decided it had warmed up enough that we could start heading out on an adventure. When it was time to go, Zeke helped by fetching his own socks.  Our goal was to explore a kids park in Valdese NC that has both a geocache AND playground equipment. 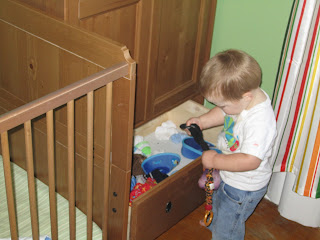 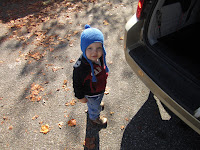 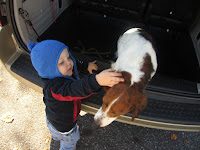 When we got to the park we got out of the van and headed down the path to find the geocache (its easier to cache before play than play before cache, especially with a Zekey in tow) 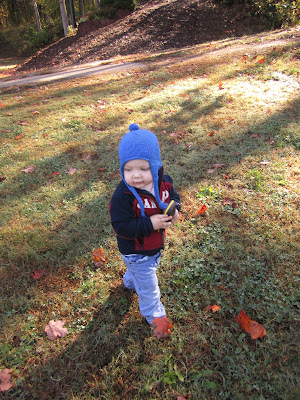 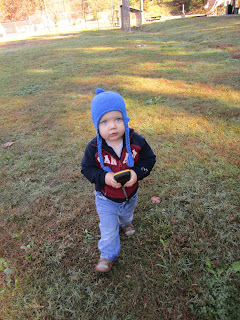 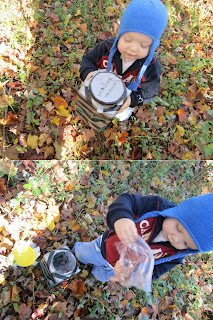 Zeke wanted to hold the GPS so he led us across a baseball field  and into the woods behind the scoreboard at the edge of left field.

The cache container was a large one, and full of items specifically designed for kids.

Zeke selected a rubber ball to take with him.   We then replaced the cache in its hiding place.  Then we headed back across the field to the playground where much swinging and climbing fun was to be had. 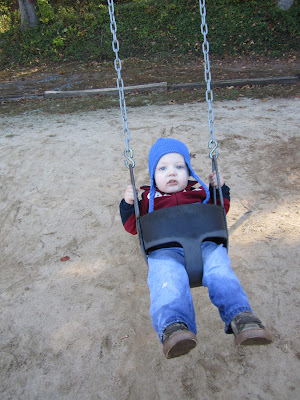 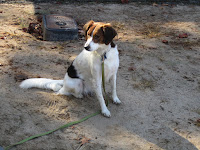 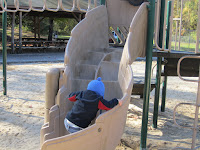 Bailey stood guard as we swung on the swingset and climbed on the playground equipment.  There were many other kids around and Zeke had a good time watching and playing with them as well. 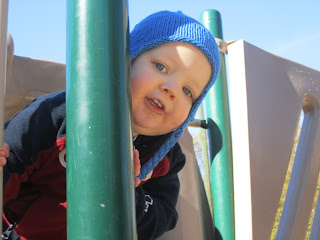 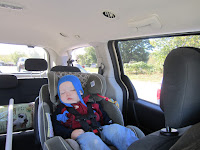 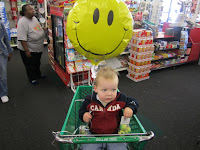 We left the park after an hour of playtime.  I was planning on grabbing some more caches, but Zekey was to thwart those plans.

Almost before we left the parking lot Zeke fell asleep - a full two hours before his normal nap time.  I drove around for a couple hours listening to NPR and waiting for him to wake up.  I ended up driving around Lenoir and exploring some places I have not seen yet (and found some interesting places for some cache hides)

When he finally woke up we went shopping for some cache trade items, and a happy face balloon (cause why not?). 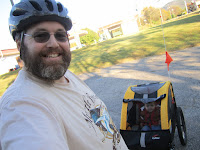 We then went home and grabbed some lunch.  Nap time is normally at 1:30 but Zeke was well off his normal schedule at this point  so I let him play until 3:00 when I finally put him in his crib so daddy could take a much needed nap :)

An hour later Daddy finally woke up and we went off for a bike ride alone the Greenway. 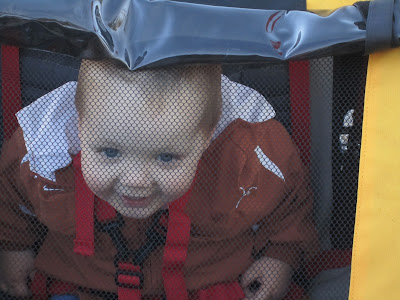 We got home and had some Kraft Dinner for supper around 6pm. 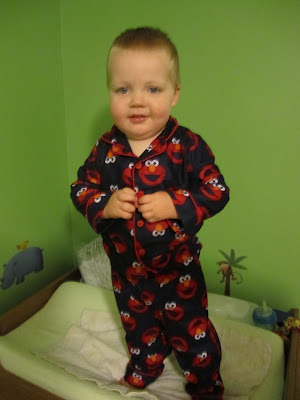 We then played until 7:15 when I put Zeke down.  He had a fussy moment when I tried to put on his PJs... he refused to put on his shirt, something he has never done before, and kept pointing to his wardrobe.  I finally took him over to his wardrobe to see what he was fussy about.  It turns out he saw the Elmo PJs that mommy bought for him, and he was insistent  that he wore them.  So a quick dressing and he was rocking his new Elmo PJs to bed.

Tomorrow we head to church, so I don't expect anything new or unusual to report.  So I will end this here.

It has been a good weekend.  Turns out the men of our family get along just fine when left to our own devices... but it will still be very good when Mommy returns tomorrow afternoon :)


Posted by Dave DeBaeremaeker at 9:54 PM

Dave, this is my very *favorite-ist* of all the blogs you've written! I loved the others but this one was funny, touching, "multi-photoed" and perfectly describes a "coming-of-age" experience for father and son - for mom, as well, but from a different perspective!

Moms are, very often, the clock that keeps home and hearth ticking (did that sound sexist? . . if so, too bad, it's true!). You and Zeke handled mom's first time away with humor (look at those smiles!!), lots of exercise (I love the pics taken at GZ and the park!), a happy face balloon, new jammies and Kraft dinner! BRAVO!!