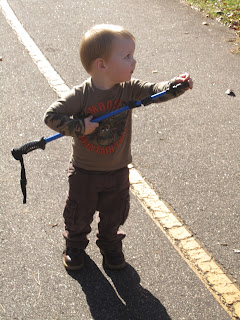 What did you do on your lazy Sunday afternoons? As for me and my house, we chose to have an adventure.

I have had my eye on some tricker caches in the area for a while, one being a tricky puzzle cache.  On Thursday night I had solved the puzzle with help from fellow cachers weightman and idajo2.  So with coordinates in hand I was anxious to get out on the trails and find the container.

On Sunday, like all good Presbyterians, we head to church for some preachin', teachin', and some good ol' rock'n'roll (you do have a rock band in your church, right?)

We get out of church at 11, and normally we head home for some lunch and napping.  This past Sunday I talked my wife into going geocaching instead.

So off we went to some parks in Hickory NC to tackle some caches.

The first couple caches were along the Geitner trail, a paved path that weaves through a wilderness area   The first cache on this trail was the puzzle cache mentioned above.  It involved some bushwhacking, but luckily the coords were spot on. 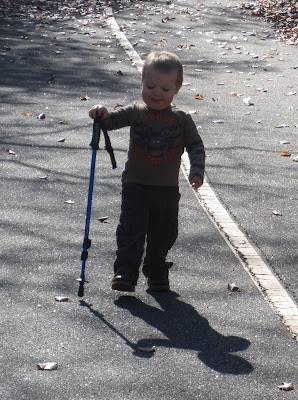 The second cache was further down the trail, and even more further down into a valley, 150 of bushwhacking on a slope.  The cache was 45ft away from GZ so it involved some hunting around, but I eventually came up with the grab.  Debbie and Zeke stayed up on the path and played.  On the way back to the car,  Zeke, ever looking for new sticks to play with, discovered the joy of Daddy's trekking pole (good thing I bought two of them! :). He actually got pretty good at using it correctly.

The next cache was at Hilton Park, just a mile or so down the road.  I have had my eye on this cache for a couple years now.  I tried to grab it once before but I was unprepared for the terrain.  The cache is called Hilton Wet Or Dry, because it offers you a choice: you can bushwhack to the cache over a half mile of bush (and this is North Carolina bush - chock full of thorny vines that would scare the devil himself), or ford a river that is 30 ft wide.  Which would you choose?

Myself I am picking the water. So with trekking pole in hand, and wearing freshly waterproofed hiking boots, I headed to the rivers edge and prepared to face my water nemesis.

The river is not actually that deep, perhaps a foot and a half at its deepest, so simply wading across is an option - but to my mind that approach lacks finesse.  So I slowly picked my way from river rock to river rock, and eventually made my way to the far bank and clambered up the sleep slope on the other side.  The cache was about 150ft through the fine North Carolina bush, and quickly made the grab. 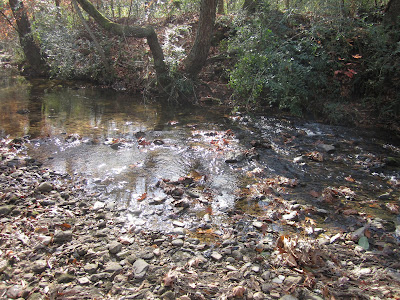 Getting back was a bit trickier.  For one I had to slide down the steep bank to get to the waters edge, and the rocks were spread wider apart.  So it was touch and go for a bit, but with clever application of a trekking pole, utilization of low hanging tree branches as support from the banks, and some good old fashioned determination to not slip, I made it back across with out much incident.  The toes of my boots got wet, but my feet inside remained nice and dry - not to bad if I do say so myself.

I finished off the day finding the one other traditional cache in the park, then we headed home just in time for our afternoon naps.


Posted by Dave DeBaeremaeker at 6:03 PM