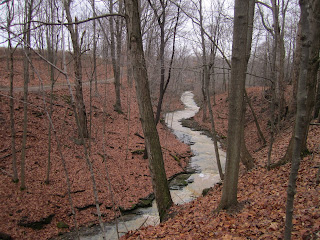 Today I explored parts of 12 Mile Creek, a river that flows through the Niagara Peninsula.  It was an adventure that held a lot of surprises.

I started the day going for a cache with a lot of favourite points in the Short Hills Provincial Park.      I pulled into the parking lot, and grabbed my gear and headed down the trail.  I went about 100ft when I realized that I has forgotten something, so I headed back to the van.  When I arrived the person who was parked beside me was getting out of his truck. As I was digging around my van he said "hey, are you a geocacher?  I noticed the caching badge on your bag". 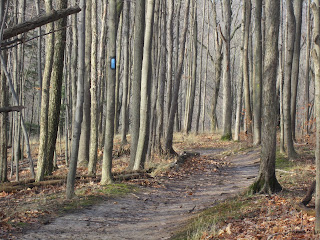 It turns out he was on the hunt for the same cache, so we decided to join forces and head out on the hike together.  During the approx. 1 mile hike to ground zero we talked about all things caching, and he pointed out that this cache was Ontario's oldest active cache, which added some interesting colour to the cache.

We parted ways at GZ, and I continued on my way down the trails to complete a 3.4 mile loop.  It was an interesting, but very muddy hike.

I then moved east a few miles and went on the hunt for a cache that looked interesting.  When I got to GZ it turned out that the cache was way above my physical abilities, and rather than risk certain death I decided to settle for  a couple of what appeared to be less interesting caches in that area (appearances are deceiving - these were awesome caches in their own right), so off I went down another muddy trail through the woods along the edge of 12 Mile Creek. 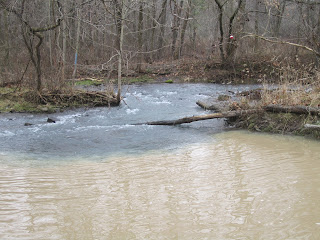 It turns out that area used to be a town here, long since abandoned (who knew?). There isn't much left but some old bridge abutments, and some support structures for a grist mill.

I walked for a couple miles along the creek, trying to get a cache at an abandoned bridge.  It soon became apparent that the cache was not available from this side of the creek, and a pedestrian bridge does not exist.  So I hiked back to the van and headed across the creek to my final destination: Morningstar Mill.

The mill is an access point to the Bruce Trail, a 560 mile trail that runs from (essentially) Niagara Falls north to Georgian Bay. So off I went down the (yep, muddy) Bruce Trail. 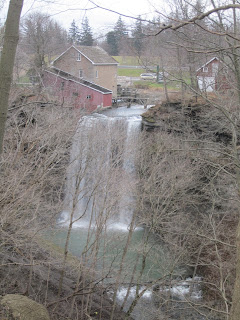 This section held a couple surprises for me.  First off the Decew Falls.  I had no idea that these falls existed.  At 73ft high, and 20ft wide, they are one of the more significant waterfalls I've seen in Ontario (aside from Niagara Falls, of course).  What make this more interesting is that my wife lived just a few miles from here before we were married.  I have driven this road many many times, yet I had no idea this large waterfall existed just a few hundred feet from the road.

The second surprise was that hiking the Bruce Trail to the cache involved descending the Niagara Escarpment.  The Escarpment is a very steep one-sided ridgeline that runs for many many miles.  At this location it is 250ft high, and it drops that 250ft in about 75 linear feet.  So, pretty darn steep.  To make things more interesting, the mud (remember the mud?) made things a tad bit slippery.  Luckily there are a lot of tree roots and rocks to act as stairs.  A fair amount of billygoating later, I was at the bottom, and enjoyed the 1/2 mile hike along the creek's edge to the cache.

Getting back up the escarpment proved to be much easier (its always easier to climb up hills than down).   Once I got to the top I had a sense of euphoria - I had tackled an amazing challenge and I came out victorious.

I hiked 7.5 miles today, most of it on muddy trails, and only found 5 caches, but it was completely worth it.  The scenery was amazing, and the caches themselves were all top notch.  Definitely a day well spent.

I'll finish this post off with a slideshow of the rest of the sights of the day:


Posted by Dave DeBaeremaeker at 9:12 AM