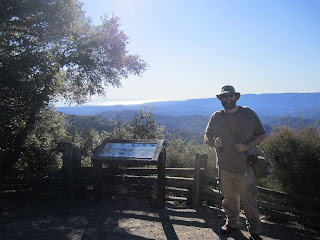 When is a muggle not a muggle?

I am out in California for work.  Now that the weekend is upon me I decided to go for a hike in the hills to the south west of San Francisco Bay. So I loaded up some caches into the GPSr and headed off to Castle Rock State Park.

The first cache of the day was a mile down the trail at an overlook with an amazing view of Monterey Bay and the hills surrounding it.   I spent a decent amount of time enjoying the view, a celebration of a hard climb up the trails.

The first rule of muggles is that if you encounter any muggles on your caching hunt they will be at ground zero.  Today was no exception.  As soon as I finished taking in the view and was ready to start my hunt a young couple arrived at the overlook.  Gah! 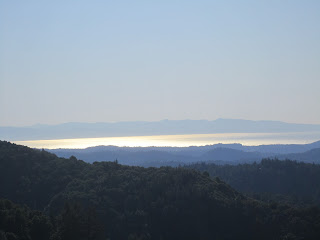 Determined to wait them out, I sat down on a nearby bench, drank some water, and tried to look awkward and creepy (with the theory that being awkward and creepy leads to people leaving early so they can get away from the awkward creepy guy - its a good trick, try it!).  The gentleman was teaching the lady how to read maps with a compass, and they were there a good 15 minutes.   The only thing I had to do today was go on a 3 hour hike... I don't have time for this!

Eventually they started to leave, but instead of taking the trail they started a bushwhack right over to GZ.  This was unusual.  I had been watching them, looking for the tell tale signs of a cacher, the biggest clue being the use of a GPS, but I didn't see anything.  These guys screamed muggles.  So I watched them a little while longer... they were definitely looking like cachers on the hunt - doing the bee dance, looking under and over every log they could find.

My curiosity piqued I finally asked "excuse me... are you by any chance geocachers?"  His response "Why yes I am, are you?". 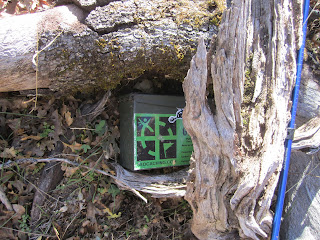 It turns out we both mistook each other as muggles and were playing the waiting game before hunting the cache.  They were also new cachers, with only 8 finds, and they lacked a GPSr.  He was trying to use a map and compass to find the caches (a method once perfected may serve him well).

We joined forces and used my GPSr to locate the cache, a nice ammo can under some logs.

They happened to be going on the same trail loops that I was so we headed off on the next leg of the hike together, me providing the coordinates, and them providing a lot of interesting information about the trails, and the park (both are locals and have been in the park many times).  We ended the 5 mile hike with 5 caches under our belt, including 3 that they were going to skip due to the difficulties in getting bearings under heavy tree cover.

So when is a muggle not a muggle?  When he's a cacher.

Posted by Dave DeBaeremaeker at 11:36 PM

Haha! Good story! Fun that the couple were geocachers too and that you could do some caching together. I'm sure thy were happy with your experience. And you didn't have to cache by yourself. Beautiful pictures too!

Another great example of whats so much fun about geocaching - I usually enjoy meeting cachers while on the trail and it has lead to some wonderful friendships that would never have come about otherwise. Excellent photos too!