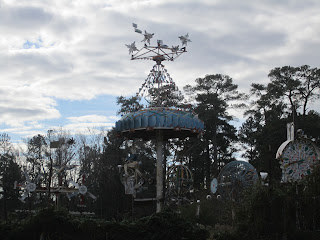 This is the last day on our family American Thanksgiving (aka Yanksgiving) weekend road trip to the Outer Banks of North Carolina, exploring Eastern North Carolina in the process.   Today we drove from Greensboro NC to Charlotte NC.  Each day has had its own flavour as we explore different regions of Eastern North Carolina.  Today can best be summarized by the term "bizarre".

Many of the caches I found today ended up being unusual or odd in some way or another. What makes this more striking is that when I planned out these caches I picked them for their proximity to our route, and page location on the Delorme atlas (our trip is also doubling as a mission to gather pages for the North Carolina Delorme Challenge).  Often this leads to a series of LPC and guard rail caches, with the occasional ammo can tossed in, but today was different. 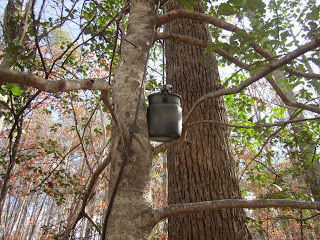 We found 13 caches today on 5 Delorme pages.  Of those 7 were things I have not seen before. Without giving away too much details, I'll list some of these unusual caches:

* We saw an amazing display of wind powered art  by a nationally renowned artist Vollis Simpson.


* A cache that was a gallon milk jug full of cement, with just enough space at the top for a log sheet.


* A metal pot hanging from a tree. The hanging part isn't unusual, but the pot was. I have never seen that type of container anywhere, let alone in a state of arboreal suspense. 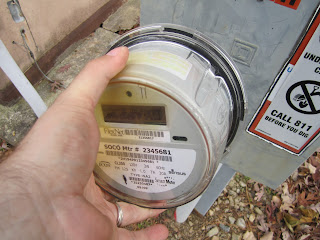 * A cache hidden as a power meter.  It was right out in the open.  It was magnetically attached to a utility box. Amazing camo job.


* A home owner had constructed a real train crossing as a gate for his driveway.


* The most unusual is a cache that was buried by ants.  The container was a film canister that was stuck in the ground at the base of a sign post. Over time a colony of ants moved in, and as they pushed sand from their tunnels, their ant hill buried the cache.  This one took a long time to find :) 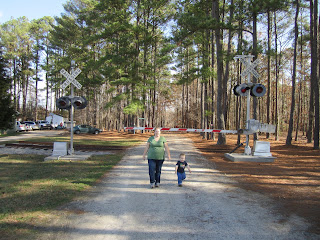 And thus ends our caching adventure. This has been a productive trip.  We found 59 geocaches, and claimed all the Delorme pages on the eastern side of North Carolina.  We saw parts of the state that we now call home that we have never seen before. We also saw Zeke take some steps towards becoming an adventurer in his own right.

Thus this adventure ends.  So now I will sign off this series, and await the start of the next adventure.  I suspect I won't be waiting that long.


Posted by Dave DeBaeremaeker at 6:00 AM

What a great trip and you made some fine memories along the way. What could be better?

I FREAKING LOVE the whole series! Great work as usual! You mix family, fun and geocacheing so naturally its all so interesting. Happy Yanksgiving and I have a feeling that the next time I read this, there will be a compass and leaf spray at the top of the site:?)