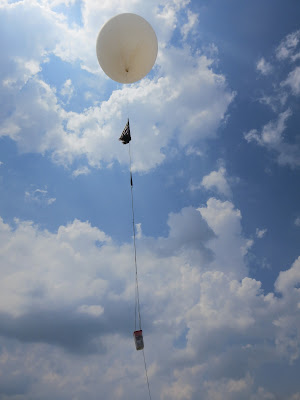 Today I had one of the most interesting and unique experiences in my geocaching career, for today  I witnessed a geocache get launched into space. (Ok, ok ok, so technically not actual space, but it did go pretty high up - it is just cooler to say "in space" than "low earth inner-orbital flight")

I attended an event called Geocaching In Space "L.E.I.F." MMXII Launch Party ( GC3M45Z) at a local airport in Carthage NC, about 3 hours from my house.  The basic idea is that a group of cachers attached a geocache (and a bunch of cameras) to a weather balloon and release it.  When the balloon reaches approx, 100,000ft it pops (by design), and the geocache floats down to earth on a parachute, and lands... somewhere.  The cache can then be hunted down and signed.

The geocache's flight was tracked via a GPS tracking device, so its location is broadcast to the cache owners during flight, and when it lands.  During the flight the current location of the cache would be relayed to the cachers via text messages, so we could all track it to the landing zone, locate the cache, and sign the log. 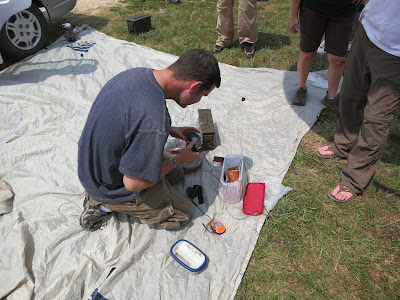 At 3:30pm they released the balloon, and in just a couple minutes it ascended into the great blue yonder and disappeared from sight.  The entire flight was expected to take about 2 hours (one hour up, one down), and it would take an hour before the first tracking data would be distributed, so most of the cachers headed off to do what cachers do best: eat.  Specifically we headed to the airports local restaurant, the Pik'n'Pig, for some food, cheer, and trail stories.

Where the cache lands depends entirely on the wind patterns in the area.  This is actually the second time they launched a geocache, and the last time the cache travelled over 100 miles and ended up in the north east corner of the state.  Because I was already 3 hours away from home, and the winds would carry the cache farther away, I was not sure if I could go on the 'chase' to retrieve the cache.  If it went as far as it did the last time, I couldn't go on the chase. 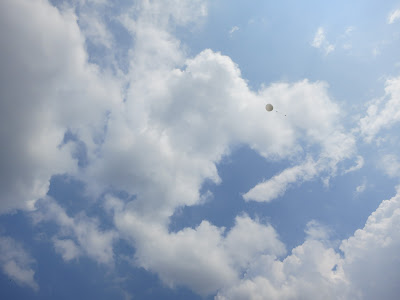 So it was with bated breath that I waited the hour to get the first location data, and an idea of how far the cache may be travelling (luckily I had chicken wings to distract me).  When the first coords came in, it was still in the air, but just 8 miles away.  So I piled into the van and headed off to those coordinates (the logic being that, although the cache wouldn't be there, I'd be 8 miles closer to its eventual landing spot).

For the next hour I received updated coordinates as to the cache's current location, and I drove from coord to coord, chasing down the rapidly falling geocache.  Eventually it landed and we all ended up in a muddy, grassy lot just south of Fayetteville.  The cache travelled about 38 linear miles. 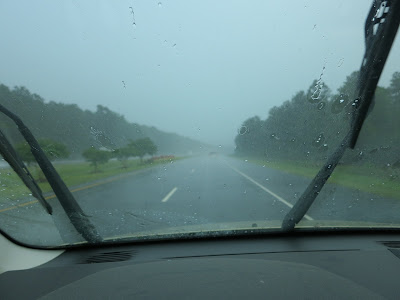 As I was driving to GZ a severe thunderstorm rolled through the area.  And by severe, I mean downed trees, tree litter all over the roads, hail, winds, torrential rains - the works.  So the area was quite soaked by the time we started hunting for the cache.  (Think the movie Twister without the funnel clouds and floating cattle)

So as you can imagine the landing location is not planned, so it could land literally anywhere.  My good fortune of landing close by was traded off by it having landed in the middle of the largest briar patch I have ever seen.

From the closest parking, the cache was 0.28 miles away.  Between us and it was a solid wall of the worst kudzu, sticky vines, blackberry bushes, and ever other sort of evil bush that North Carolina has to offer.  Lucky for us it was also now drenched in water from the storm. 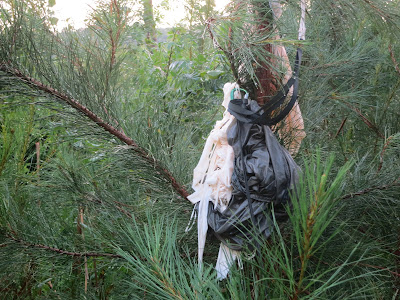 I teamed up with some cachers, and we blazed a trail through the briars, and what seemed like a long death march later (0.28 miles is a short stroll through a park, but when you can't see more than 10ft in front of you for most of the journey, it feels like an eternity) we finally ended up at ground zero.

We were, however,  among the first cachers to show up and sign the log.  They are going to leave the cache where it fell and make it a proper traditional cache, so soon you will be able to sign the log too.

They had cut up the remnants of the balloon and handed out pieces of it as souvenirs for the cachers that made that trek in to find it.  It was, by far, the hardest bushwhacking that I have ever done, by a long shot.  It felt amazing, almost victorious, to finally get my hands on that cache and sign that log book. 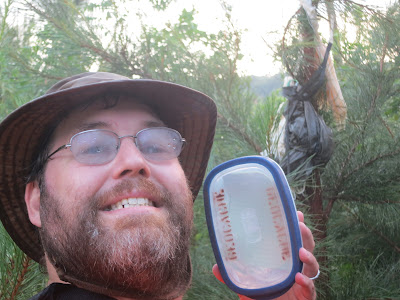 We stood around for a few minutes, took some pictures, and talked about our adventure, then we headed back to our cars.  As is typical in these sorts of things, the trek out was easier, as a cacher had located a deer trail that led to the nearby highway, so we took that trail, and walked along the clearcut highway shoulder back to parking.

I then drove the 4 hours back home.  Utterly exhausted and wet to the core I dragged myself into the house.

This was, definitely, hands down, no question, one of the most interesting and amazing geocaching experiences of my life. When I look back on the day, I can honestly say that it felt like science in action. It felt like a reality show.  It felt like a grand adventure.

Posted by Dave DeBaeremaeker at 1:06 AM

Oh man, Dave this is awesome! I would have loved to do this! You sound like you really enjoyed it and to not know where on Earth that geocache would land is just soooooo coooool!
Thanks for sharing the adventure!

Triple A Cache = Another amazing adventure

What a GREAT log, Dave!! I felt like I was right there with you!! Hmmm. However, in retrospect, I'm so glad you were willing to endure the kudzu, sticky vines, blackberry bushes, and every other sort of NC evil bush on my behalf! :D Thanks for sharing the adventure!