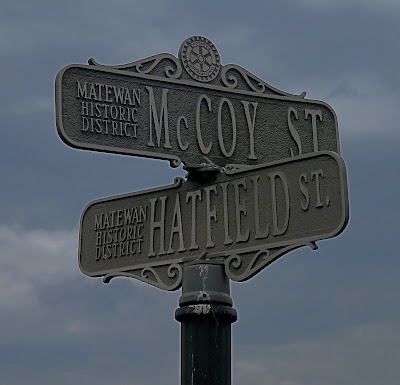 In the late 1800s, Tug Valley, on the border between Kentucky and West Virginia was home to two feuding families, the Hatfields and the McCoys.

Today in the same area there exists a geocaching series that highlights many of the important sites related to the feud.  This trail consists of 15 caches (soon to be 20) spread over 75 miles of Kentucky and West Virginia countryside.

Last Saturday, as part of the 2nd Annual Hatfield McCoy GeoTrail event, we completed all of the caches in this trail.  It was one of the more interesting geocaching experience I have had in quite some time.

Sometimes it can be absolutely amazing to walk in the footsteps of history. 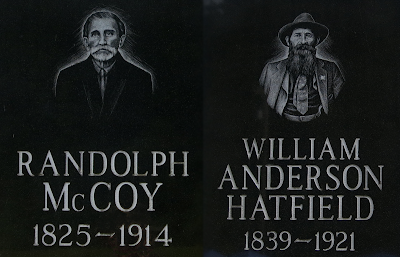 We actually started the trail the day before.  5 of the caches were located in Pikeville KY, where our hotel was, so the moment we pulled into town we started grabbing those caches.  The rest of the caches were spread over a 20 mile radius 30 miles away, much closer to the event, so we saved those to complete during the event itself.

Not only does the cache bring one to many amazing historical sites, but it also brings one through some amazingly beautiful countryside, and the hills and mountains of KY and WV.  On the way to the event we were greeted with many vistas such as this one (not a bad shot for being taken from a van moving 65MPH, eh?): 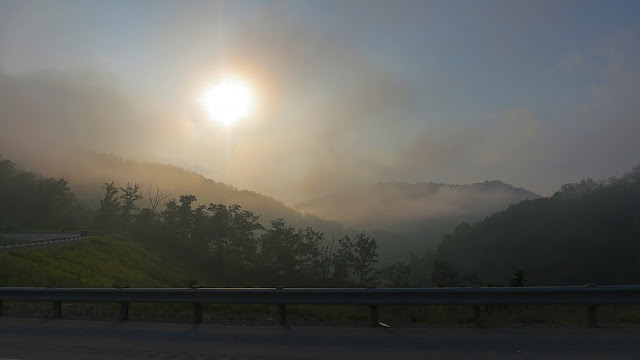 One of the first stops in Pikeville was the cemetery where Randolph McCoy, the patriarch of the McCoy clan, is buried. 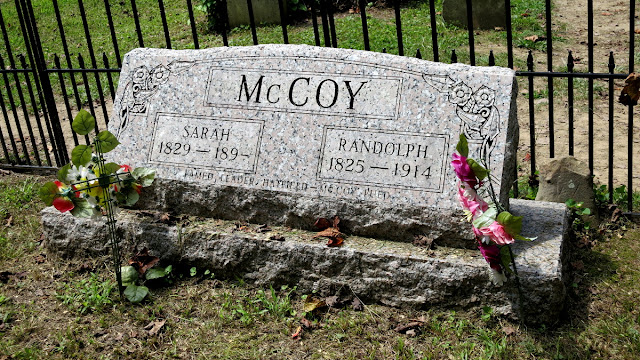 This cemetery also contains the graves of many other McCoys (tho I am told Leonard "Bones" McCoy is not among them... yet). 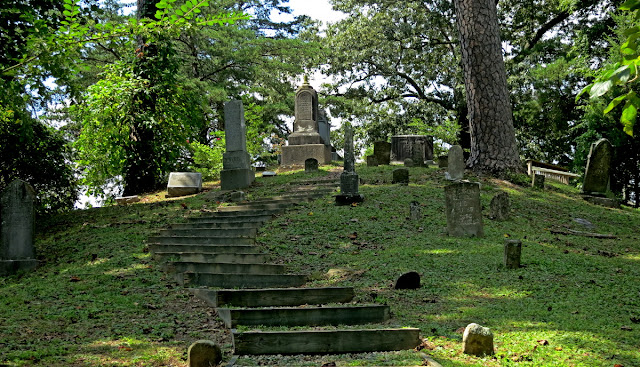 All of the caches along the trail looked the same.  A plastic container hidden in a red bird house.  This made finding the caches easier, saved on hunt time, and made the trail a pleasure to complete.  The idea of this trail was to show off history, not to test cache retrieval skills, so it worked out really well. 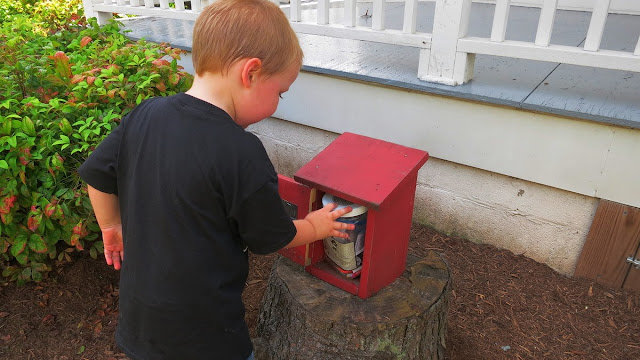 Along the way we got to experience some of the beautiful countryside.  We also saw lots of evidence of the extensive coal mining that goes on in this part of the world. 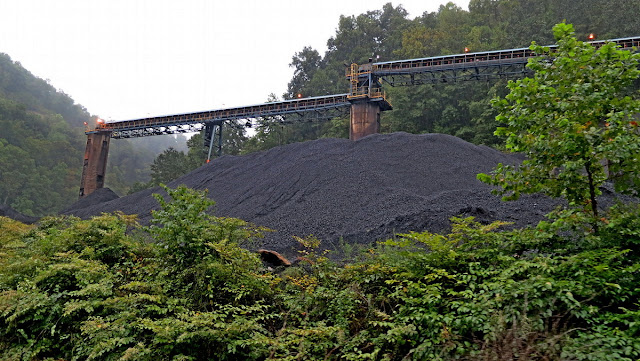 One of the most spectacular graves was that of "Devil Anse" Hatfield, the patriarch of the Hatfield clan.  This statue was made from marble imported from Italy.  He was buried on a hilltop that contained many other Hatfield graves.

Based on what I heard about the feud I had assumed the Hatfields and McCoys were uneducated hillbillies being all rowdy and unfriendly with each other.  One thing that struck me while spending some time with the Hatfields and McCoys is that they were well educated business folk, well respected in the community.  This just outlines the importance of seeing history for yourself, and not relying on books and stories to form your opinions. 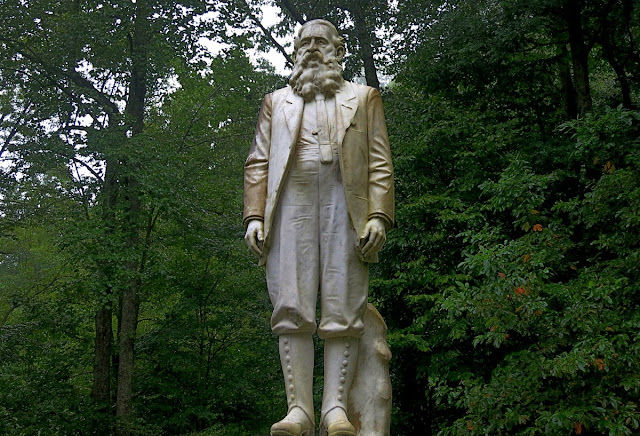 As you may expect, many of the sites also have historical markers that explain the historical significance of the area.  There are actually several non-geocaching based self-guided tours of the area that also makes use of these signs. 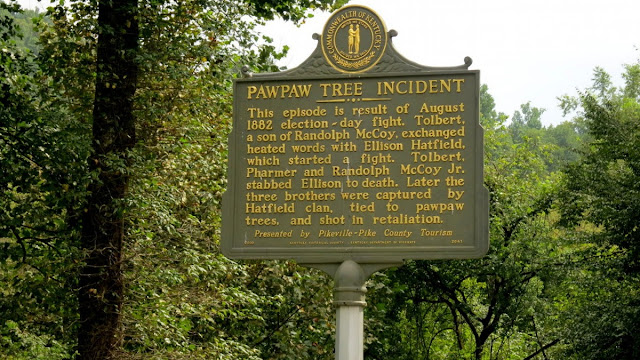 All of these caches are close to roads, however some are in more difficult terrain.  As an example, parking for the cache where Roseanna McCoy's baby is buried is only 300ft from parking, but it requires climbing 140+ stairs to get to the cemetery (not overly difficult, but not exactly a park'n'grab either).  The Hatfield cemetery had a similar elevation, but access was using a very rocky path.  The Hatfields and McCoys never seemed to die in convenient locations - this probably explains a lot of the animosity between them. 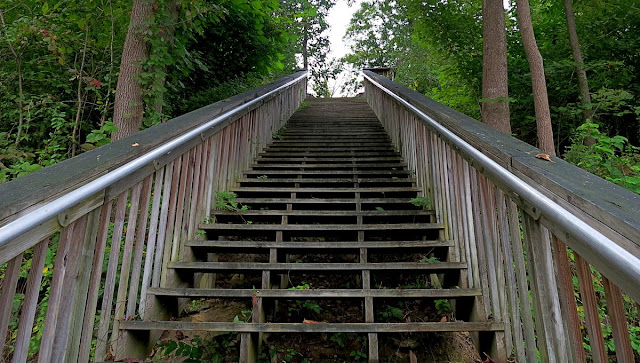 Each cache on the trail has a wooden block with a unique image embossed on it.  Cachers can keep track of their finds by taking rubbings (with crayons kept in each cache) on a tracking "passport". Once all of the caches are completed, the passport can be turned in to the local Tug Valley Chamber of Commerce, for which you will receive a geocoin.  Not to shabby.  Mine will be kept in my collection as a treasured momento of my adventure for a long time to come.

This is my completed passport. 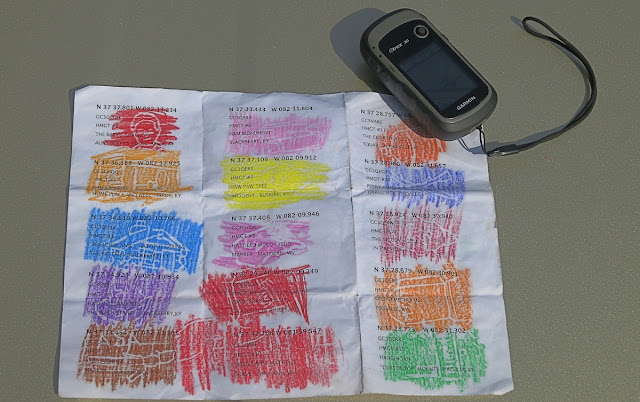 Along the way we had an unexpected brush with history.  This house is the last remaining structure from the feud, which is the McCoy homestead.  We also met one of the direct descendants of the McCoys. 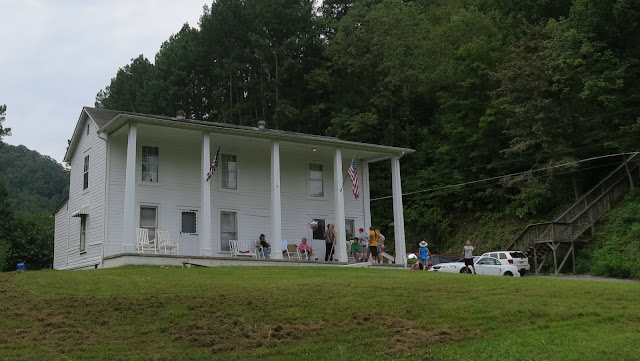 So that ended the experience with the Hatfield McCoy GeoTrail. I found all 15 caches, and claimed my geocoin. The coin is a nice memento, but the real prize was the incredible day(-ish) exploring an interesting chapter in American history.

I was very glad to have completed the trail as part of an event.  However anyone can complete it at any time.  If you are looking for a chance to explore history, take in some amazing scenery, and grab some smileys, I cannot recommend this GeoTrail enough.

Here is the link to the bookmark list for all the caches: Hatfield McCoy GeoTrail. Check it out for yourself! You may just get to know history first hand yourself, and isn't that reason enough?
Posted by Dave DeBaeremaeker at 10:17 PM