Today I found my 2500th geocache. To celebrate I bought a new car battery.

I was geocaching in a park, and my wife stayed back in the Geo-van Of Destiny with the napping kids.

I had walked the perimeter of the park and ended up at the main entrance, where I grabbed my milestone cache. I texted my wife to come pick me up (since she had to drive by the location anyway, it seemed logical for her to come to me, instead of me to her). When I did she told me the radio stopped working, and the car would not start. Looks like I was walking anyway. 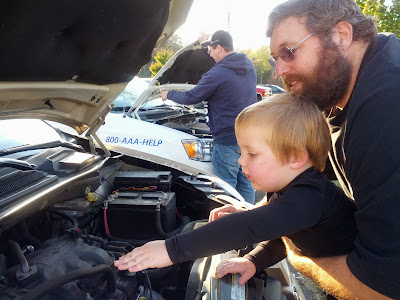 When I got back to the van I heard the tell-tale clicks of a dead battery. I needed a boost. A quick call to AAA to get some help, and an hour later, and I had a new car battery installed in the van (AAA guy ran some diagnostics and determined the battery was the issue.). We were back on the road. It was too late to keep caching, so we headed home.

I am just thankful the battery died where I had excellent cell coverage, and was close to a quick responding AAA mechanic.  I cache so often out of cell range, in out of the way places, it could easily have left me stranded for a long, long time.

It is a rare day geocaching when I don't end up with a story to tell, even when the cache itself is mundane.  Life is funny that way.
Posted by Dave DeBaeremaeker at 10:30 PM