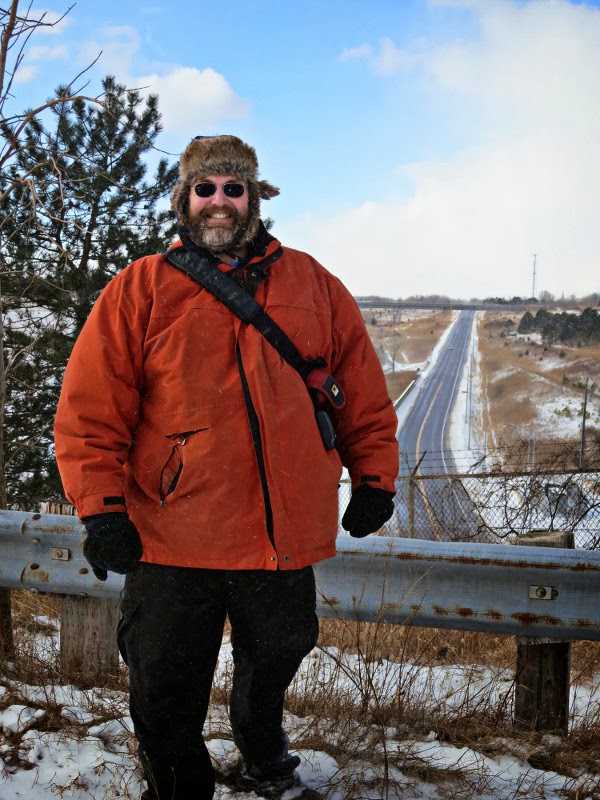 On New Years Eve day, around 11AM,  I attended the "Doc House's 7th Annual New Years Cachin' Eve" geocaching event, which was billed as:

"A bunch of like-minded folks celebrating the game we all love in just about anything the weather decides to throw at us on New Year's Eve. Maybe we'll have a snowball fight. Perhaps we'll stand around and freeze."

"Anything the weather decides to throw at us" is the operative word.  At  14f, with a windchill of <0f, and a few inches of fresh snowfall, 20(ish) Canadian cachers gathered in a park in Welland Ontario to see what adventures they could get into.

This event is where I really saw the difference between many of the cachers I have met around the world, and the cachers I met in Canada.  The difference is in the willingness to face bad weather.  During this event (and the event the next morning, covered here), I saw the young, old, athletic, non-athletic etc. brave the cold and snow to have some fun, despite weather that would cause many other folks to go to ground. Others may call it a "snowpocalypse", but Canadian cachers call it "Tuesday" (as they put on another layer of clothing then walk out their doors to seek more adventures).

I have often said that I don't let weather stop me very much - I guess I come by that honestly.  Life is too short to let something like cold or snow (or rain, or heat for that matter) stop you.  Bad weather makes for a better story anyway (tho one may argue I have to say that to justify this post - one would not necessarily be wrong). 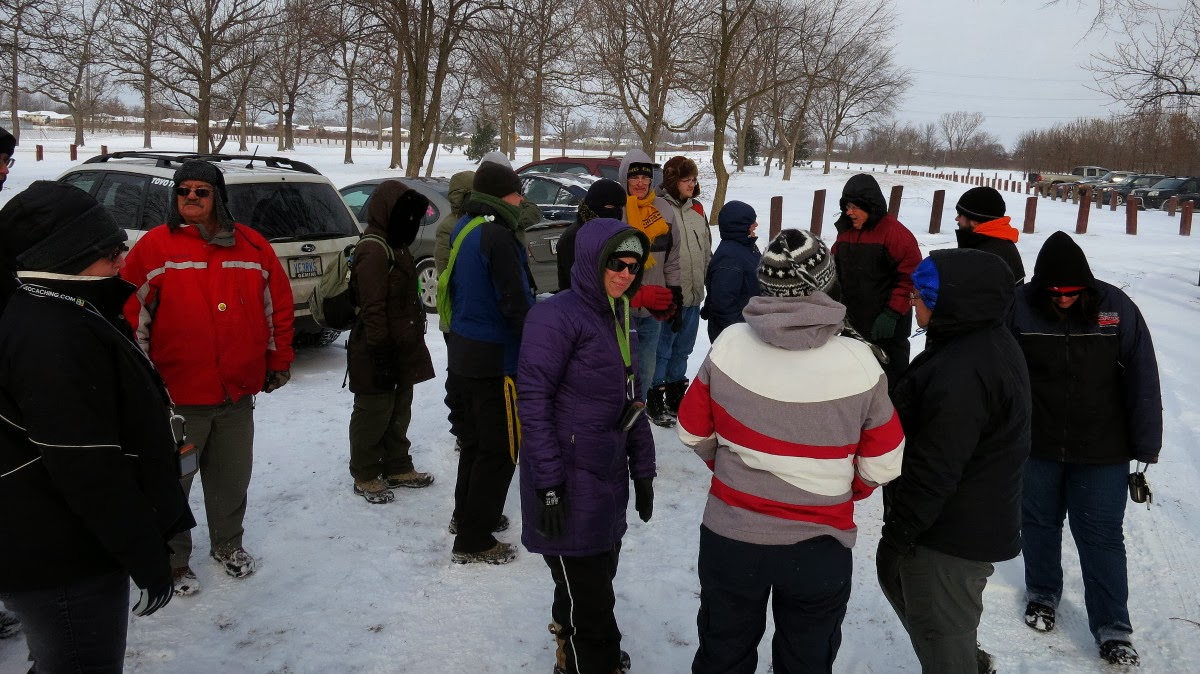 So we started the event by hanging out in the parking lot doing some jaw jacking the way geocachers do: hard-to-solve puzzles solutions discussed, trail stories told, travel bugs exchanged, hints about hard to find caches given (and so on, and so forth).

After a few minutes we headed down the trails to start finding caches. 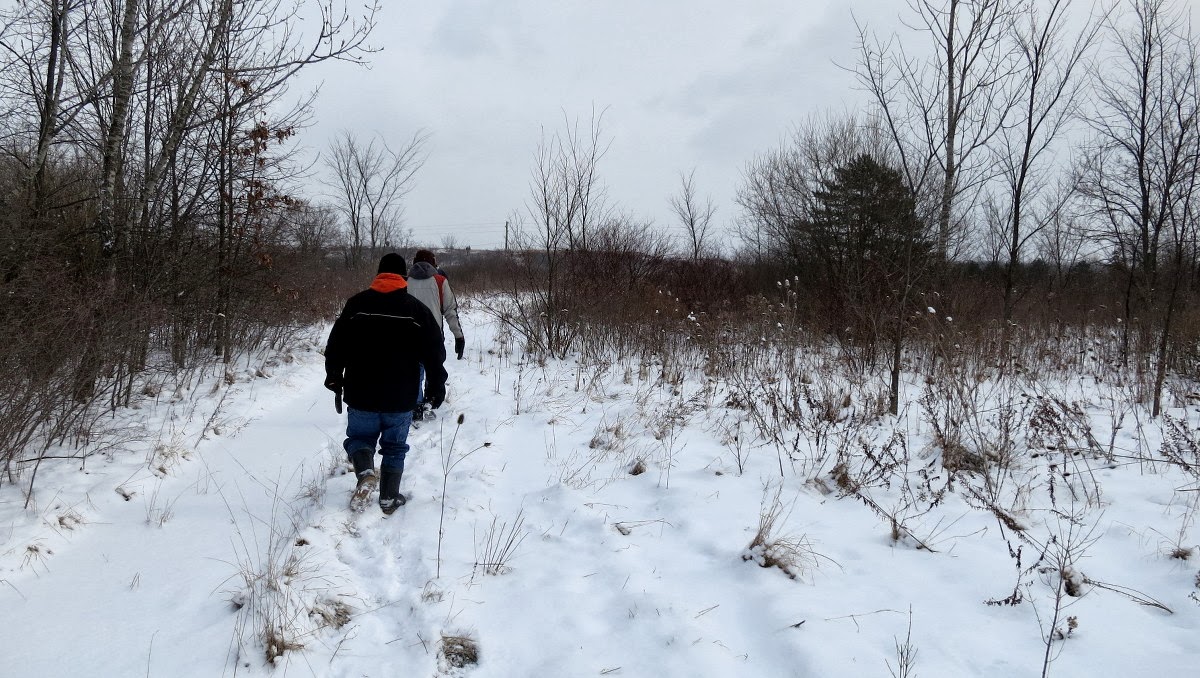 The first cache required some tree climbing.  There is a hidden cacher in this photo, can you spot him? 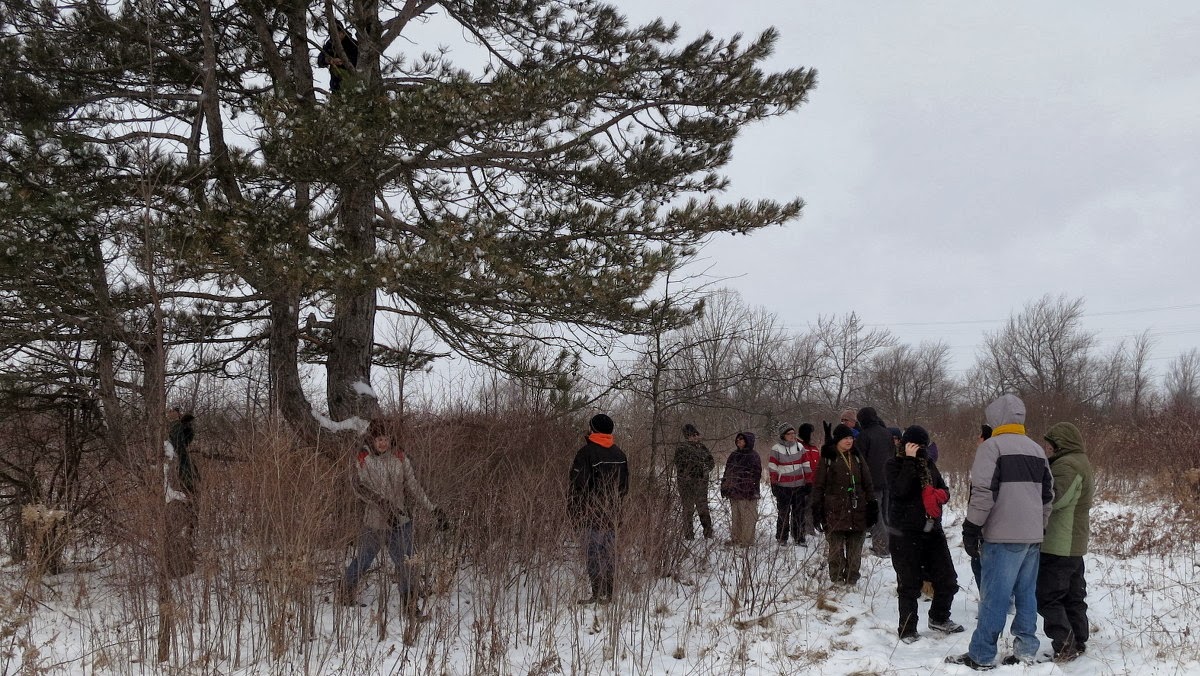 We ended up walking along the Welland Canal, which is a man-made waterway used by ships to get between Lake Erie and Lake Ontario.  Under the snow the path is actually an access road (I am not sure if its paved or packed dirt). 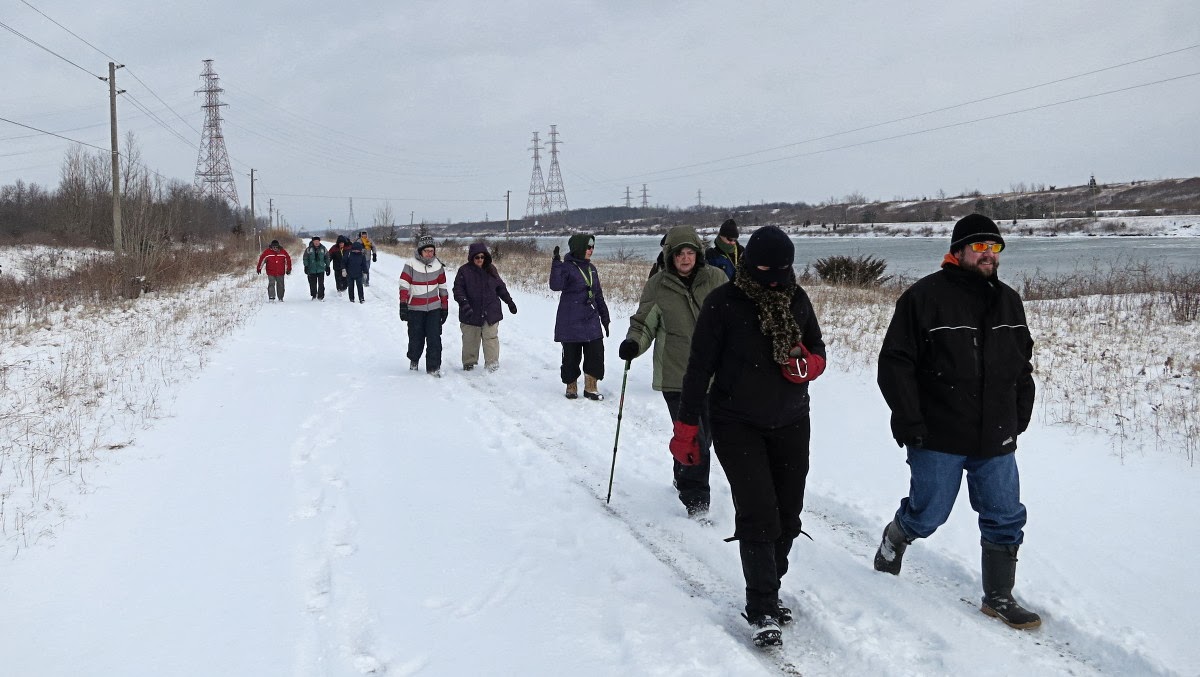 The caches were varied, some in trees, some under rocks. Some, well... 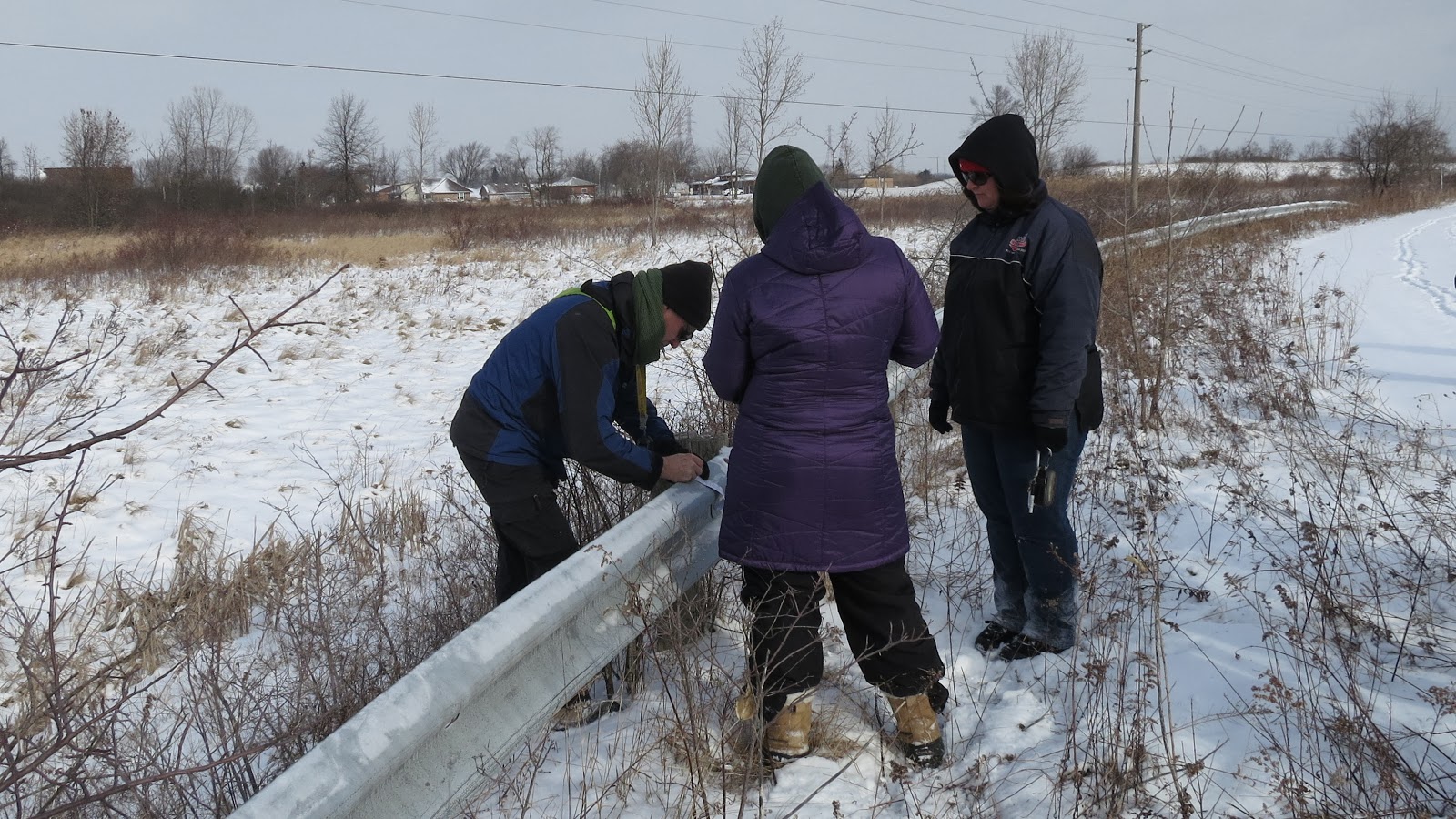 The area around Welland Canal is flat and (relatively) tree free, so you get a good view.  This grass was actually hard to walk on as each tuft was frozen, so the ground was surprisingly uneven, despite the snow filling in the cracks. 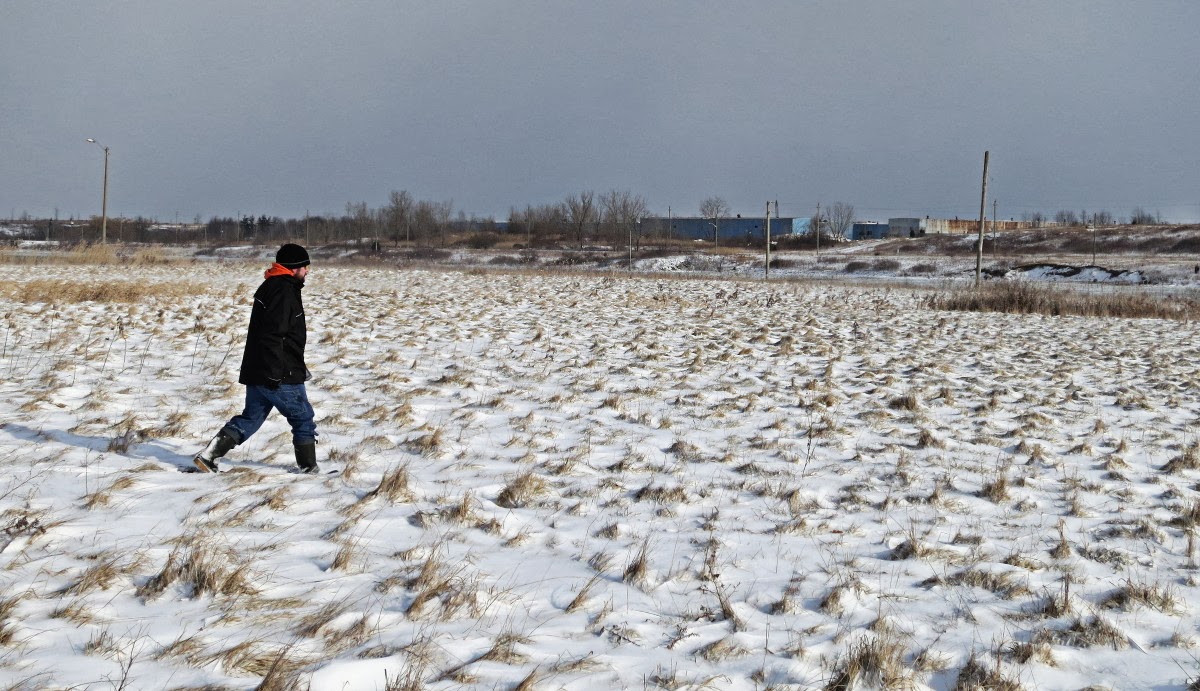 The reward for crossing the above field is a great view of the canal (and the smiley). 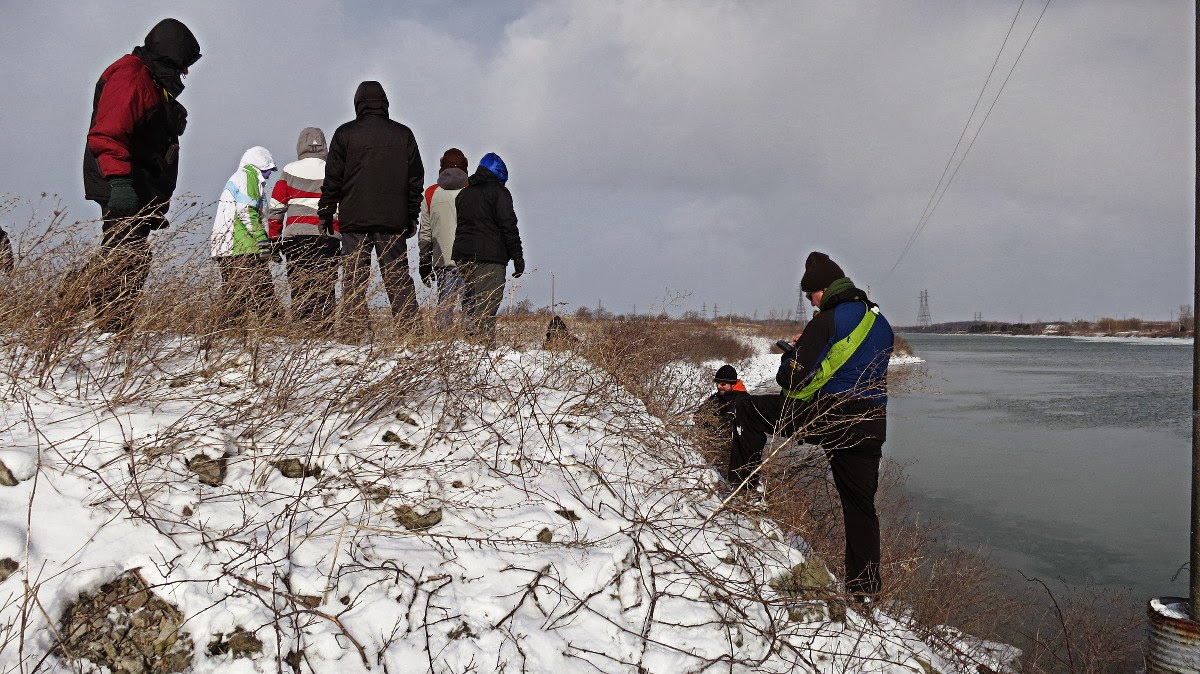 The downside to the flat land is that there are few hills, and especially trees, blocking the blistering cold wind.  The windchill was sub-zero Fahrenheit, and bitterly cold against bare skin. 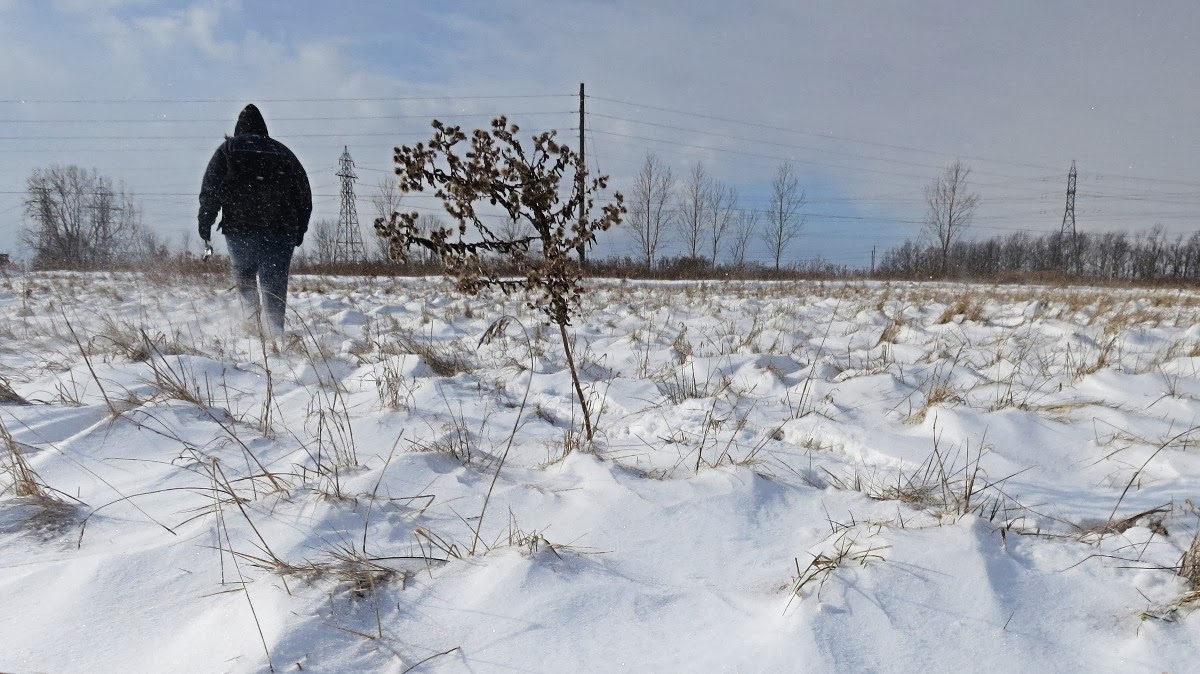 When we got to the end of the trail we piled into pre-placed cars and drove back to the park where we began our adventure. I ended up riding with an older gentlemen (I'd guess in his 50s) who had cached with a broken hip for 6 months.  Yes, thats right.  A broken hip (one may say tragically, if one was so inclined, but one isn't, so one won't - don't worry, Canadians will get the joke).  He even did several long hikes, one being 21 KMs.

That, my friends, is the very definition of hardcore (and/or stubborn as an old mule).
Posted by Dave DeBaeremaeker at 7:07 PM