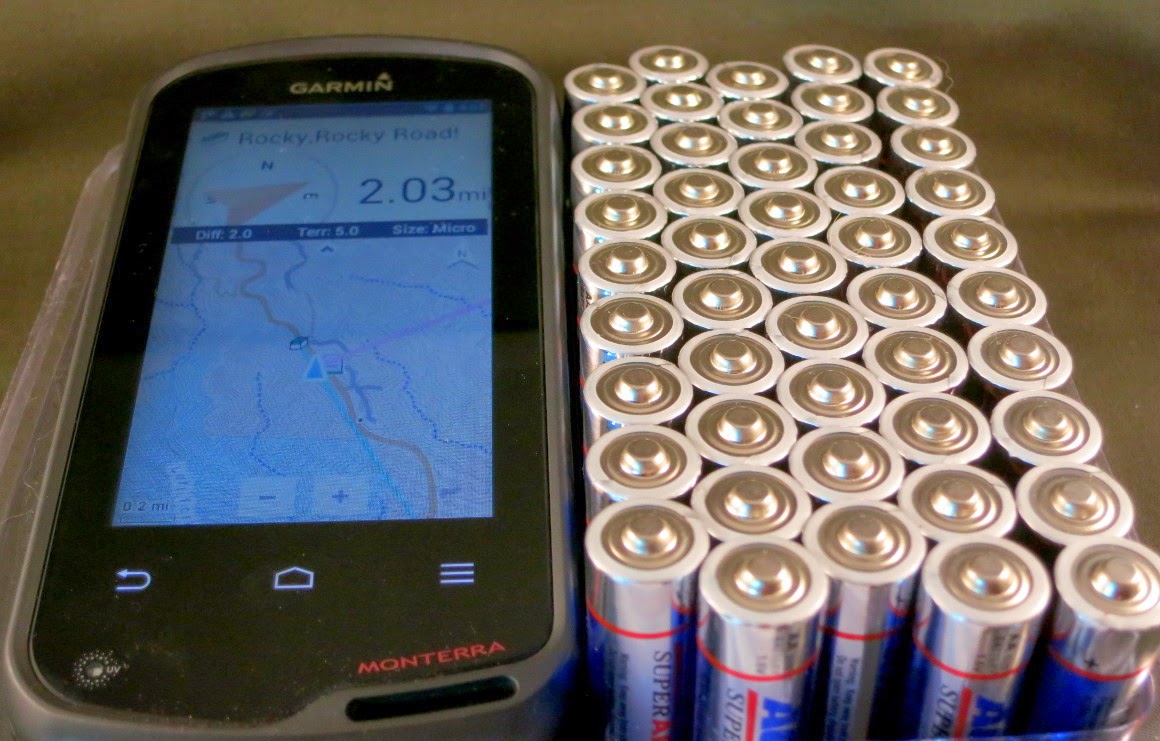 We come at last to the issue of power.  Battery life is one of the most important issues that a geocacher faces when going out in the field.

This is where the Monterra falls flat on its face.

I canna do it, Captain!

I have yet to see a GPSr from Garmin that will not last at least a full days usage in the field.  I have geocached for 12 hours straight with my Montana 600, a device which uses the same size power pack as the Monterra, with power at the end of the day to spare.

The Monterra gets nothing close to this.  The first time I took out the Monterra on a caching run I got just under five hours from it.  Five.  Take a moment to ponder that. This isn't barely a solid mornings worth of caching, let alone an entire day.  In Garmins defence, I did take the device straight from the charger, and did not do any of the normal power saving things one can do on such devices, like lower the display brightness, or turn off the radios.

I decided to give it a second, more fair, attempt, and gave it every chance I could:  Full charge overnight.  Turned off all radios except the GPSr, turned the backlight down to 0%. I shut down all Android apps, and only used the ones provided by Garmin. 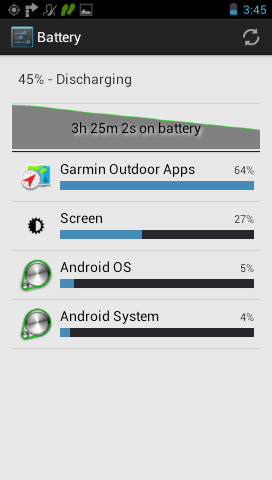 I turned the GPSr on in the park I was caching in for the day, and cached for 3 hours, 25 minutes.  I found 12 caches.  When I was done the battery was at 45%.  To compare this to a device I know has great battery life, I brought along my Montana and let it run the entire time I was caching, with as equal usage as I could give it.  It was at 85% battery life by the end.

I hope you can see the problem here.

One handy feature of Android devices is that they give pretty decent stats about where the power goes.  As you can see it went mostly (64%) to Garmin Outdoor Apps. Luckily this looks like a software problem and could theoretically be fixed in an update.  However until then, stock up on batteries.  It takes 3 AAs each, and if they last the same length of time as they did in my Montana, you'll get about 3 hours from the set (I typically got 2/3rds of a runtime from AAs on the Montana as I did from the battery pack)

Garmin seems to also have issues with charging. For some reason the Monterra just burns power.  It can take 4-5 hours to get fully charged from the provided wall plug.  In contrast my smart phone takes about 2 hours.

The Monterra seems to have trouble getting charged from a computers USB port while its turned on. My phone charges just fine, albeit twice a slow.  I think Garmin needs to rework their power systems.

Note: I feel comparing the charge times between the Monterra and a Nexus 4 is a fair comparison. Both have roughly the same size batteries, do roughly the same things on the same general OS, and both charge via USB. If anything the smart phone should fair worse as it has a larger battery to charge, more radios, larger display, and faster processor, all of which should burn more energy.

Hopefully these power issues are a software issue and can be fixed in the future.  As it stands now the Monterra falls well short of acceptable power usage for the hard core geocacher.