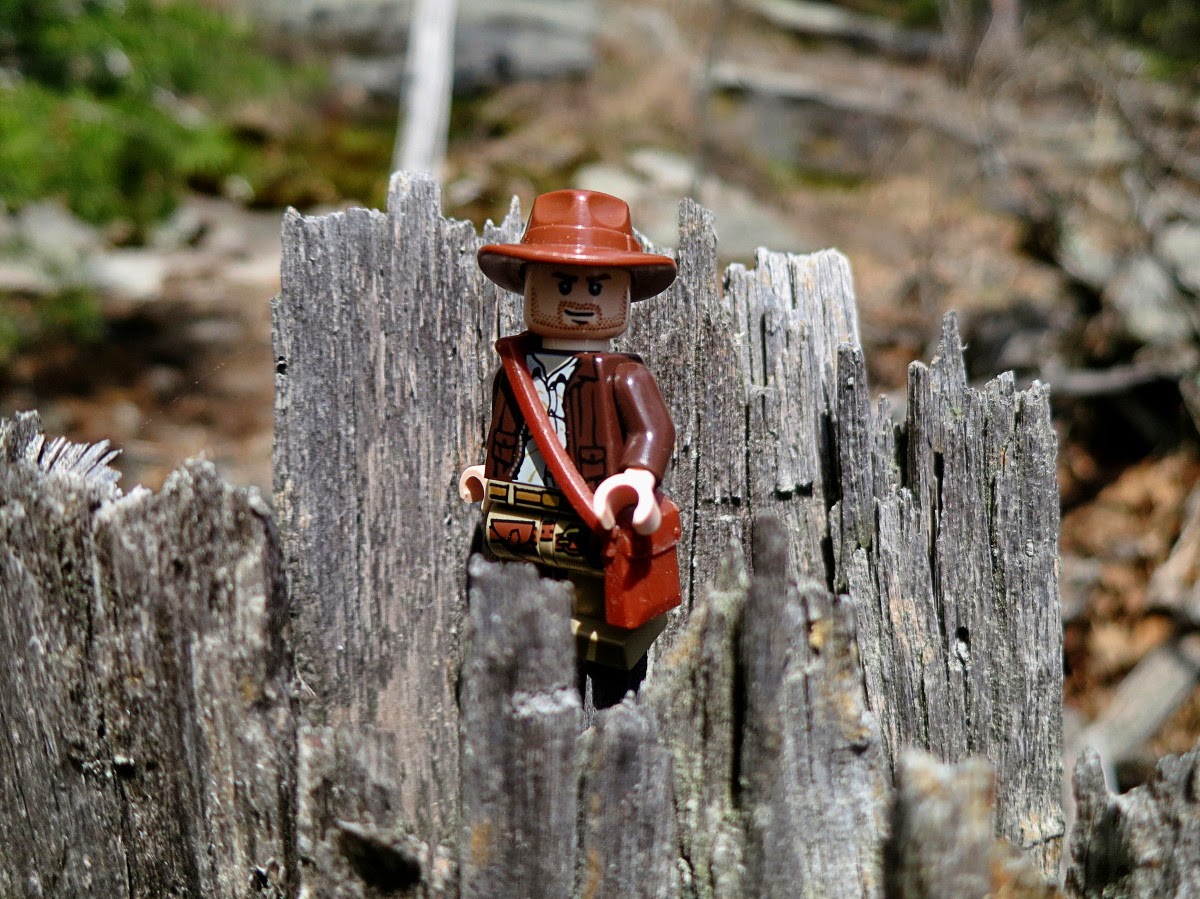 As you may know (or not know, to be honest I really don't know your entire back story)  Indiana Jones is the most famous and hard core adventurer in the entire world (who isn't a Hobbit).

Last weekend whilst I was hiking up a rocky face on the amazingly appropriately named Rocky Face Mountain, I came across the path of Mr. Indiana Jones.

So I followed him.

With a camera in my hand.

Indiana was off on another whirl wind adventure in search of hidden treasure.  In this case the First to Find on a birdhouse cache on the other side of the rocky face.  He had a long way to go, over the rough strewn rock, crawling over things, ducking under things, crawling over some more things. 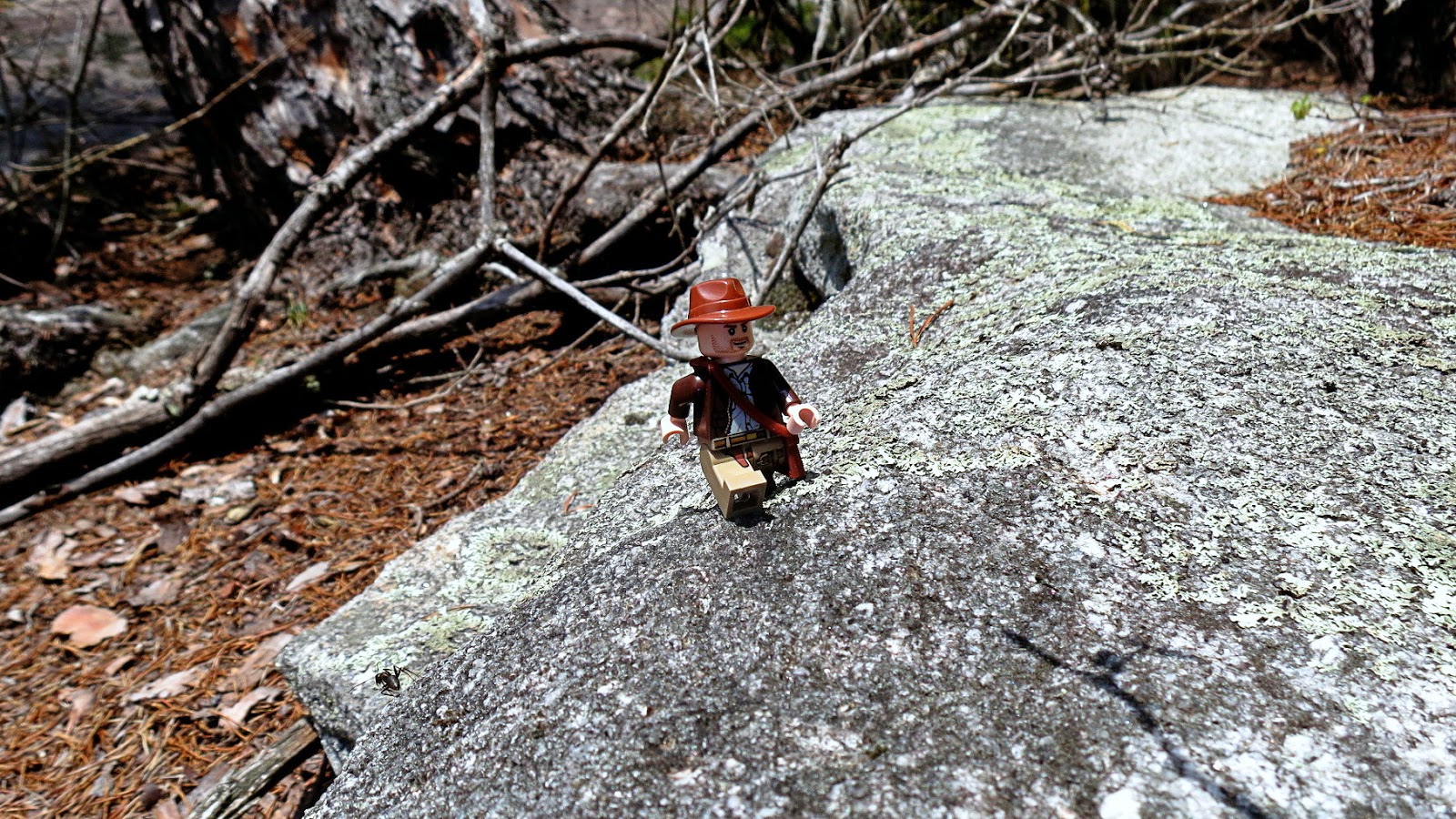 As he approached the woods on the far side he climbed up on a log to get a good look over the land. Looks like his destination is east north east, about 100 yards! (authors note: while that distance may not seem impressive to you or me, in Lego minifig scale it is the equivalent of 2.1 miles) 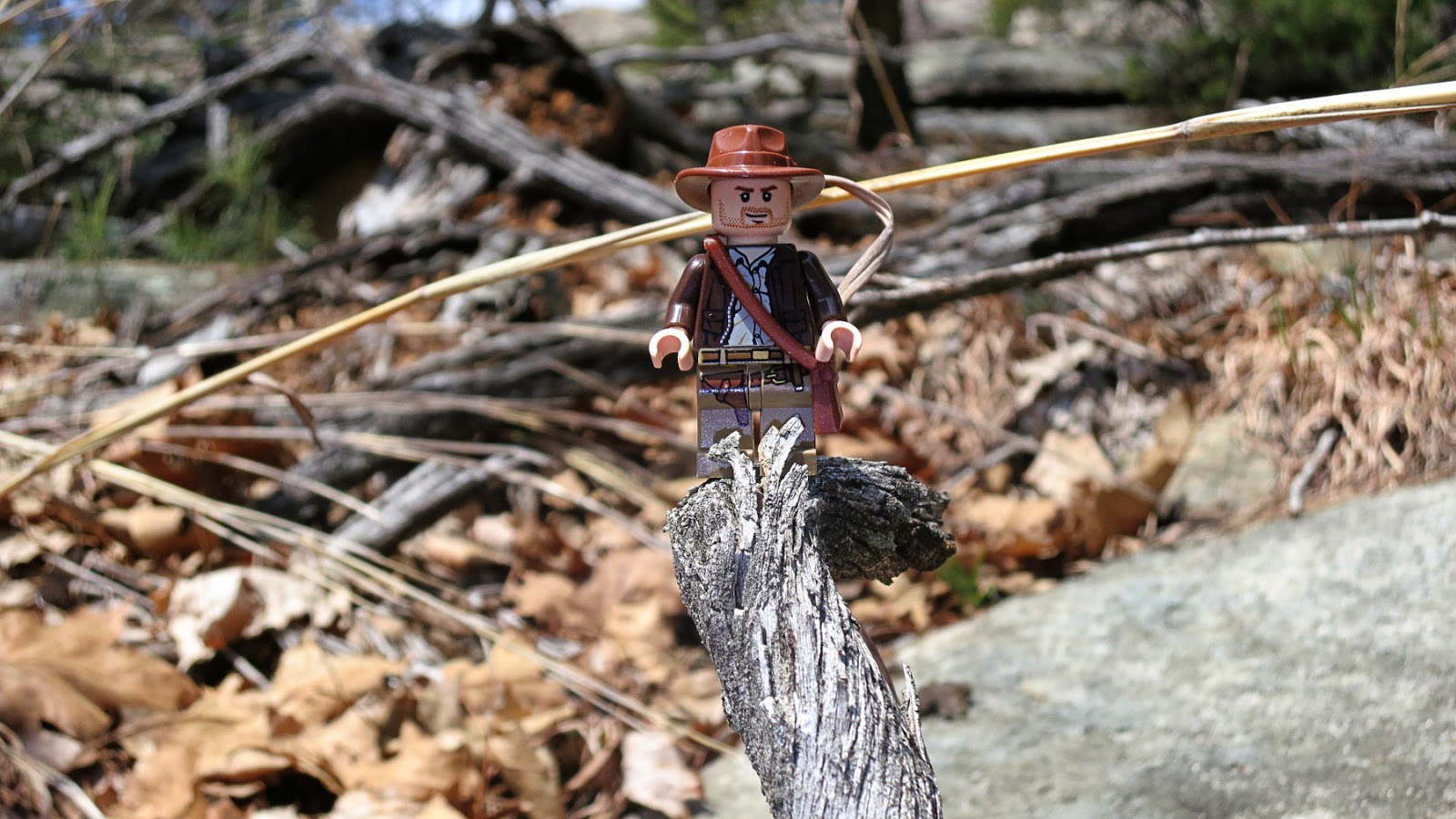 He kept crawling over things, and under things, and over more things, until he got to the base of a gigantic 15ft tree.  He could see his goal, but it was out of reach.  There was no choice... he would have to climb up the monster tree... without rope... or flexible hands... or knees... what could possibly go wrong?

Crawling and scraping his way up the massive trunk to the level of the birdhouse, he started crawling along the wide sweeping branches.  Despite the dizzying heights he pressed on, all recklessly macho like. 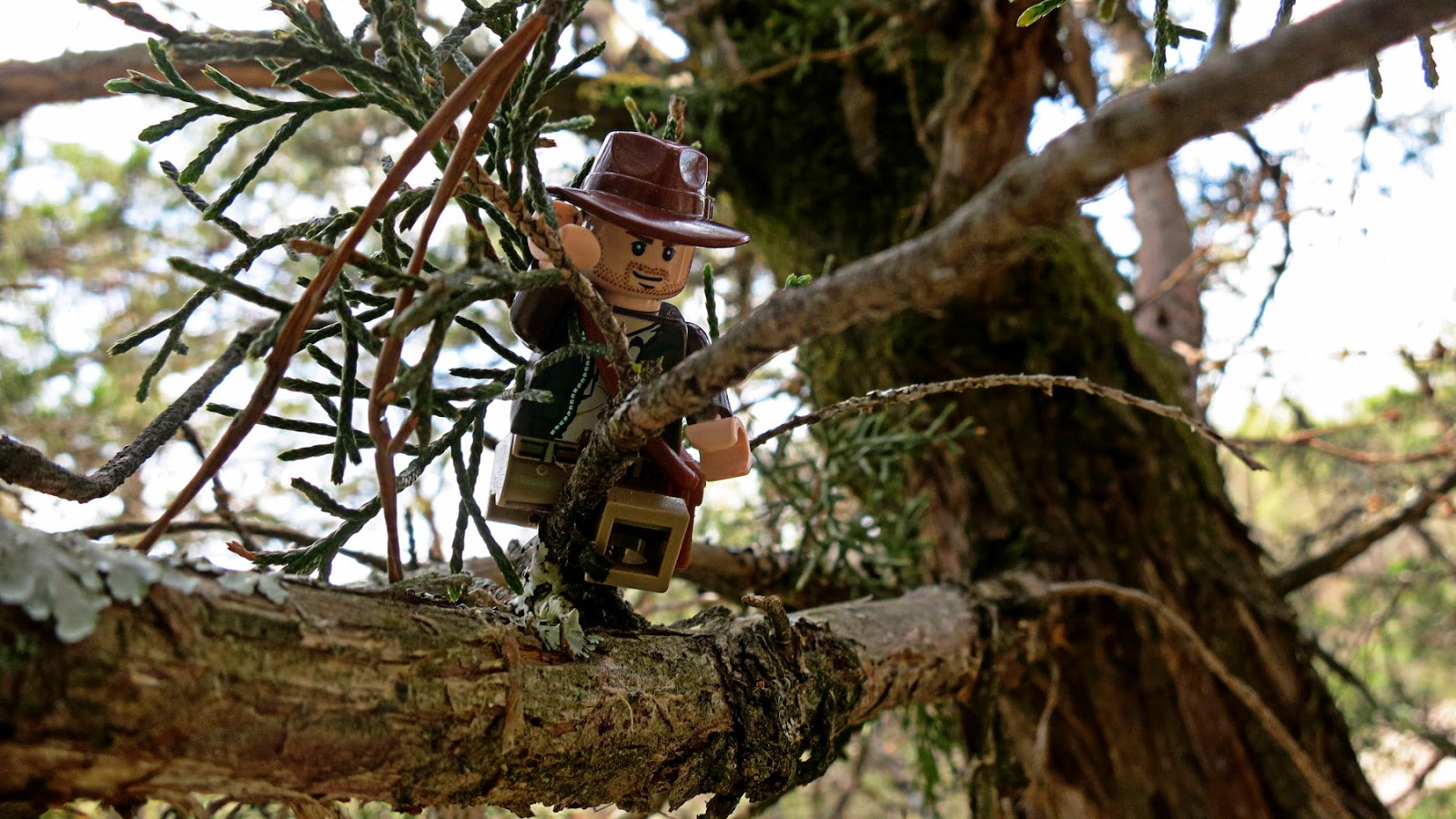 Inching ever closer to his goal, he took a risk and climbed along a thin branch.  It is probably not worth mentioning that at this point the level of peril our plucky hero was insanity itself.  Hairy stuff. The very definition of 'holy crap!' His insurance agent sent him a tweet  to discuss increasing his life insurance premiums.  A feeling of suspense and dread is very appropriate at this point, so if you are feeling that, you are feeling good things. (If you are not feeling that, what on earth is wrong with you?!? we can discuss your epic jadedness later, this is about Indy right now.) 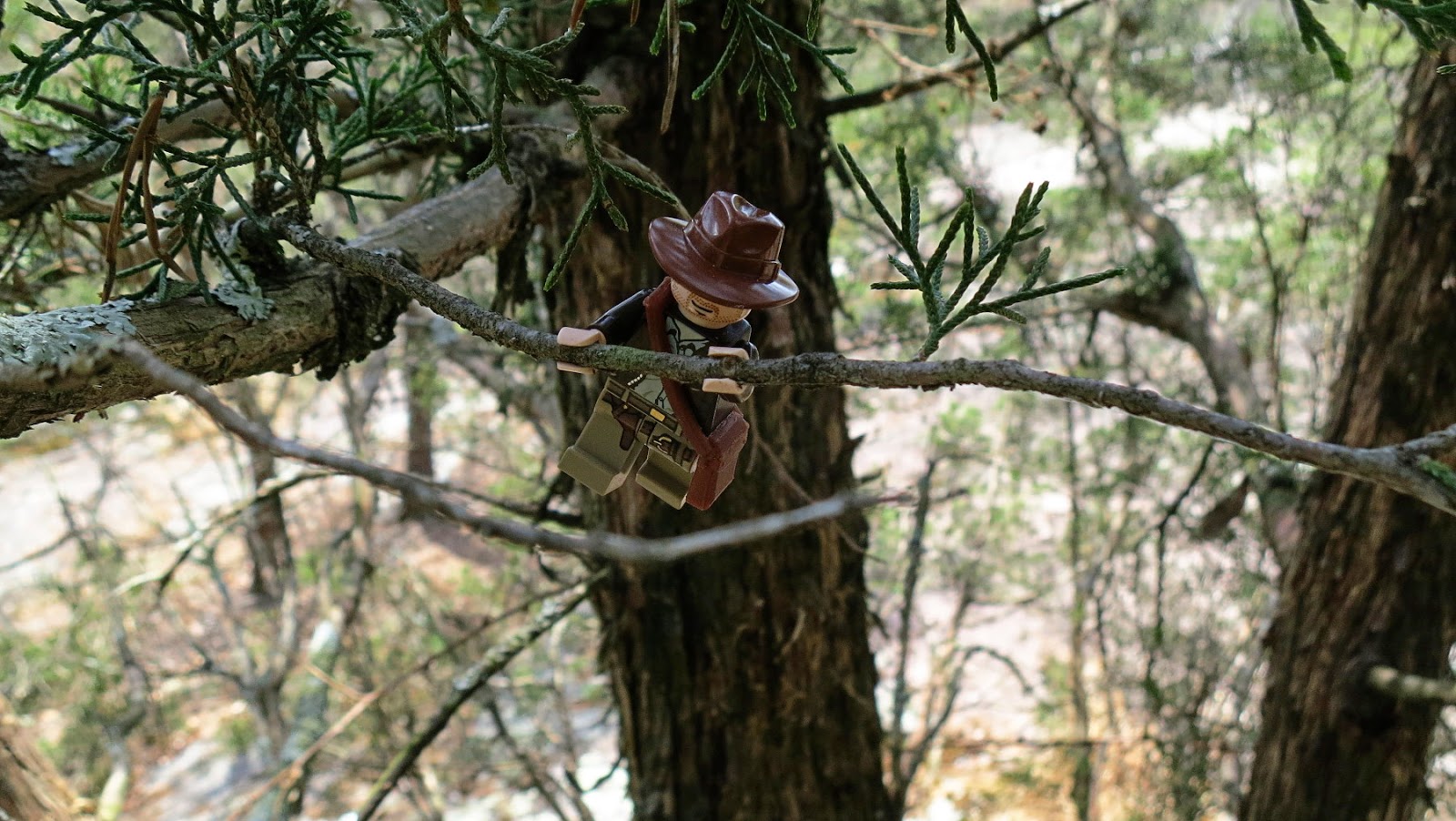 Indy finally arrived at the point where the birdhouse attached to the tree with a massive rope support system.  There was no going back at this point (he thought about it, but he didn't want to risk his reputation with the ladies. I'm sure you understand) so he slid down the ropes and finally set foot on the roof of his goal. 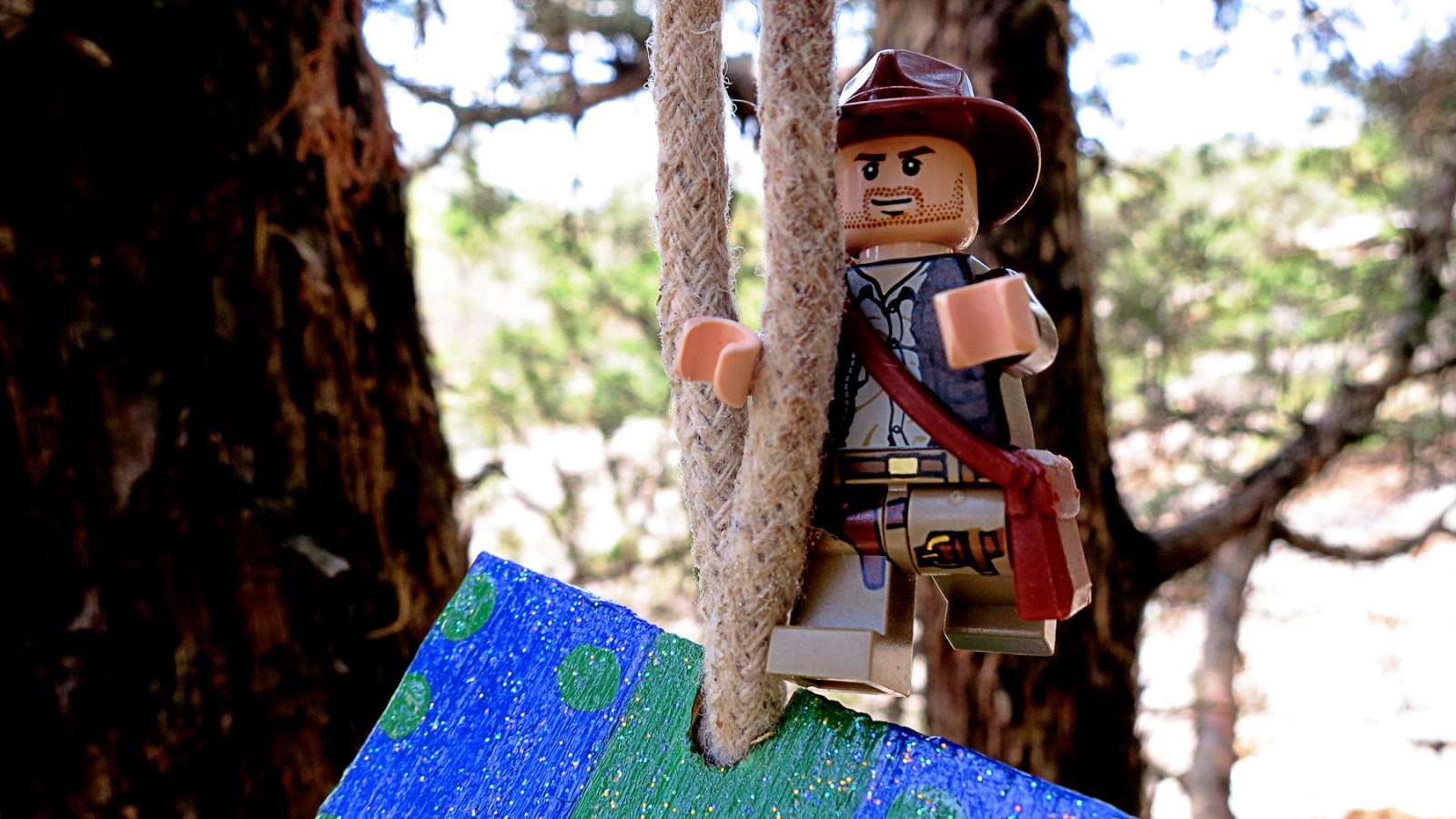 Once he was firmly standing on the steep peaked roof he stopped for a quick break and to shoot a boyish smirk to the camera (not shown).  After a few minutes, and uttering a very manly confident quip about "finishing this" (exact words not shown for reasons of copyright),  he slide over the side, opened the cache, and crawled inside.   He quickly looked at the log and... 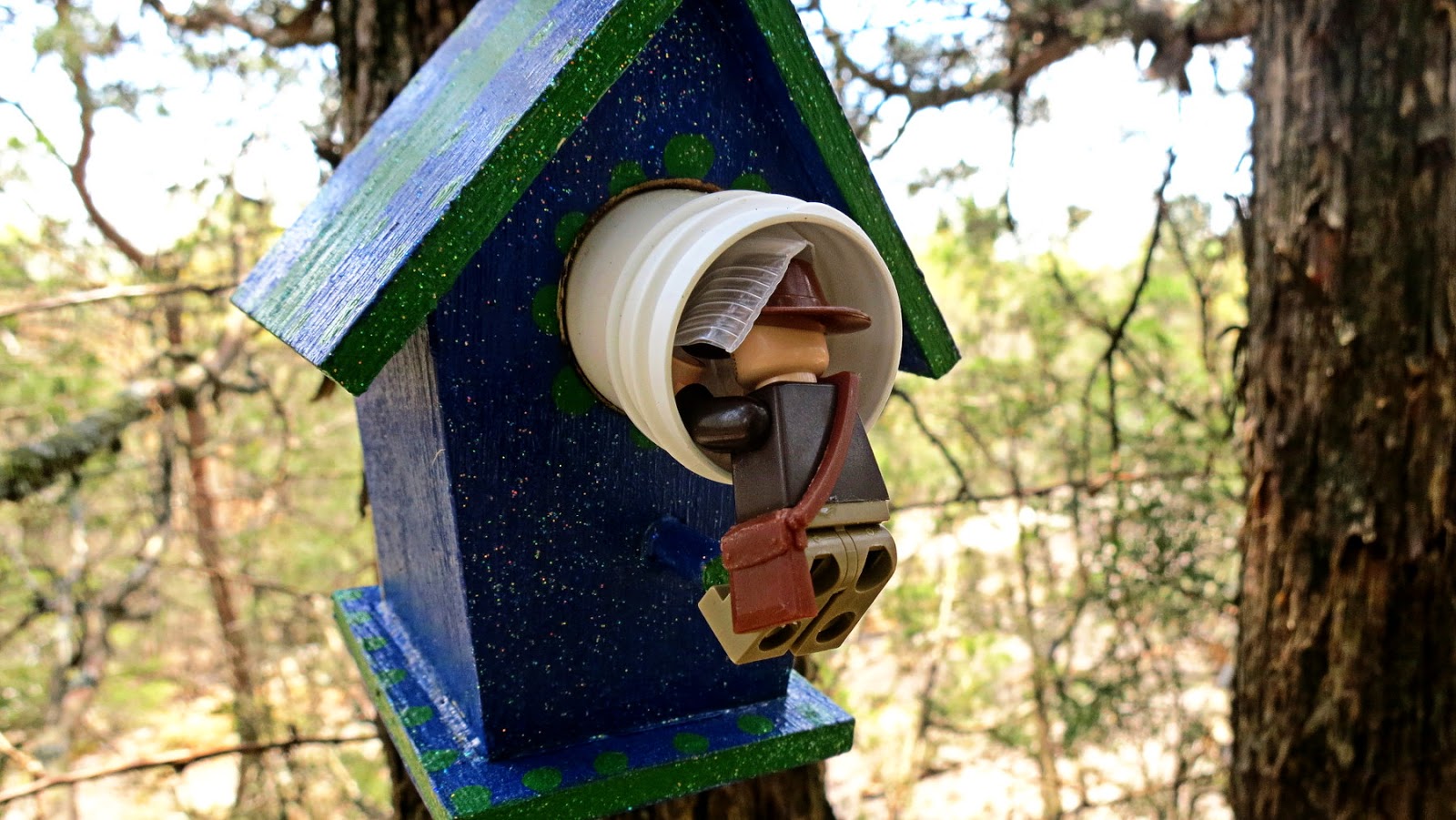 Someone named debaere unnamed had already signed the log just minutes before him.  Gah! Such disappoint! This was just like that time when he got away from that guy with the artifact by being clever on a train, only to have it taken away by the constabulary and kicking off what would become the story arc for the Last Crusade (if you see where I am going with this...)

Yeah, its exactly like that time, except no trains, fewer Nazi's, and we won't find the Holy Grail in this story.  We will, however, get to learn a valuable lesson. Which is this:

All is fair in love, and First To Find races.

"Nuts to this!" Indy exclaimed, then rode off in the sunset in an airplane that conveniently came by to pick him up. Last I heard he hung up his fedora and became a professor of archeology at Marshall College in Bedford Connecticut.

Somehow, I suspect, we haven't quite seen the last adventure of Indiana Jones just yet.

Did you like this story?  Let me know in the comments below.  Hate mail also accepted.
Posted by Dave DeBaeremaeker at 8:43 PM