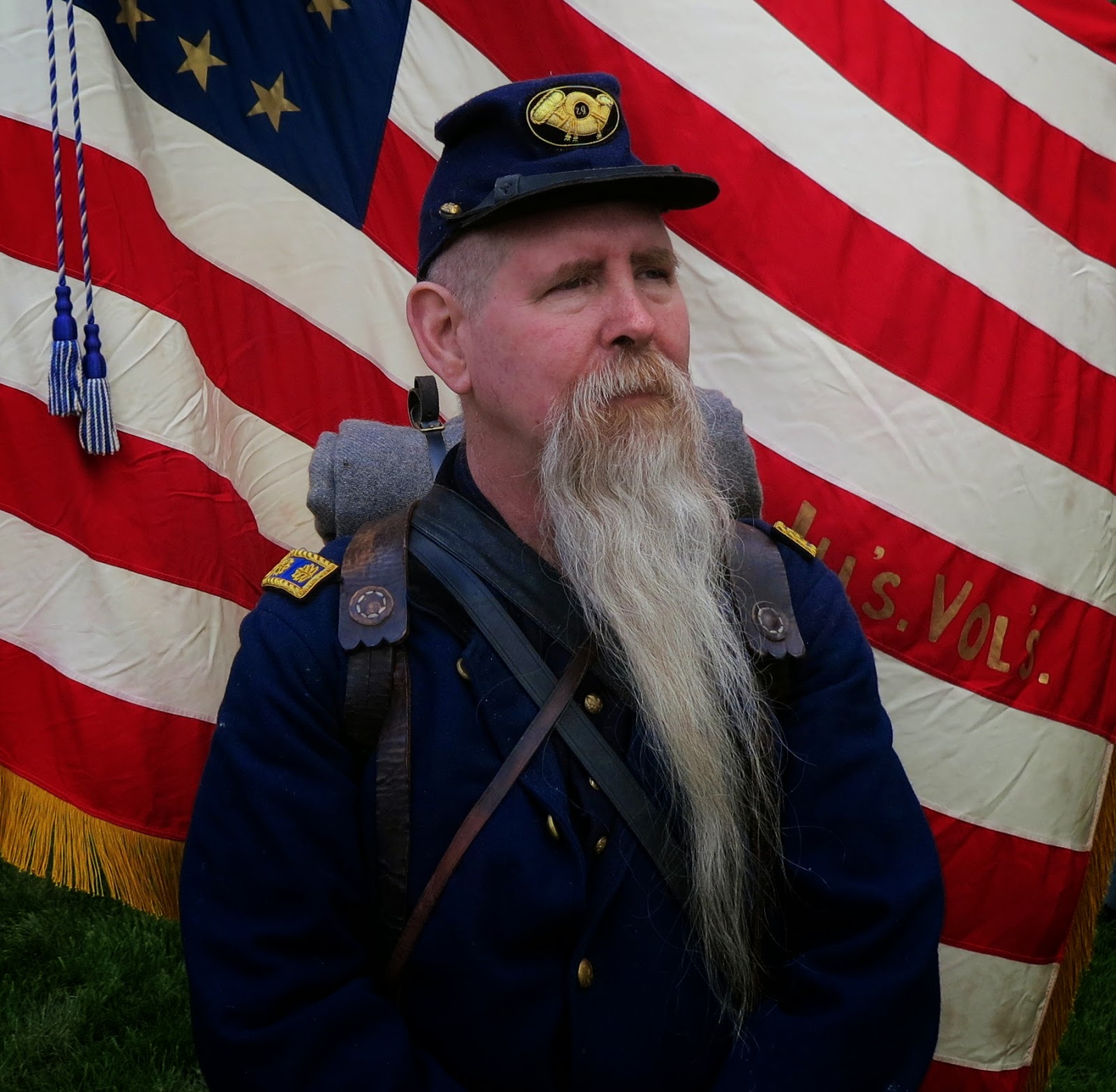 This morning was a busy one.  In just a few hours I met two Presidents, got caught in a battle skirmish, drank some home made root beer, watched a blacksmith make a horse shoe, and checked out some field artillery.

All of this happened before lunch.

It happened at Civil War Days at the Naper Settlement in Naperville Illinois.  Picture a city block full of old timey buildings, and amongst those buildings several encampments, and many folks, from the civil war era.

Given my immigration status, and home address, and given the Settlement is behind Union lines, I inquired if I should identify myself as being from the South, or from Canada.  I was universally told "Canada", so I did.  It saved a lot of bloodshed (and perhaps won me a Nobel Peace Prize).

I started the day taking Zeke to the blacksmith shop, and watched him make some hooks out of metal (to hang pots over fires). 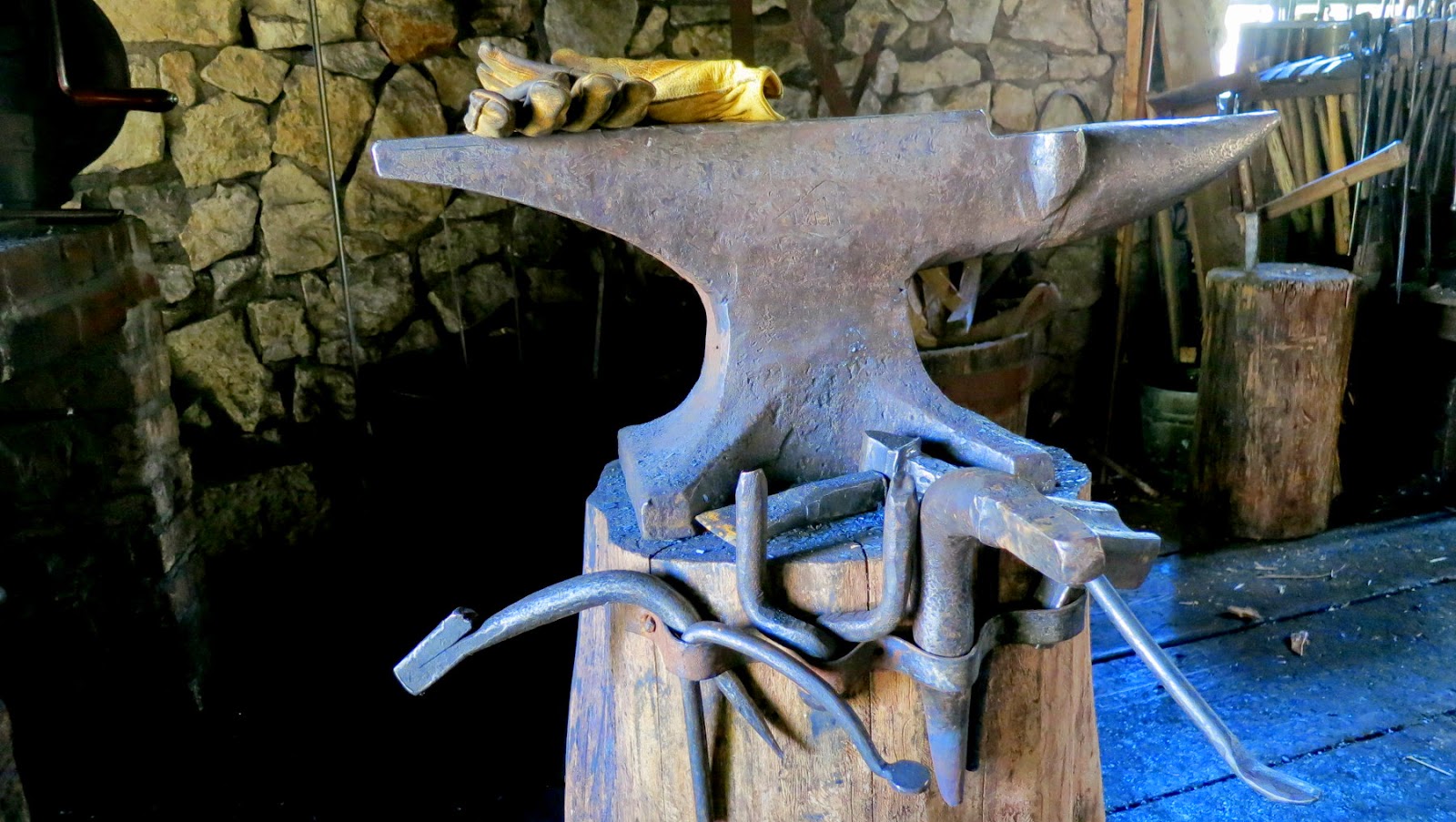 I eventually moved on to check out a lady making some fancy lace. 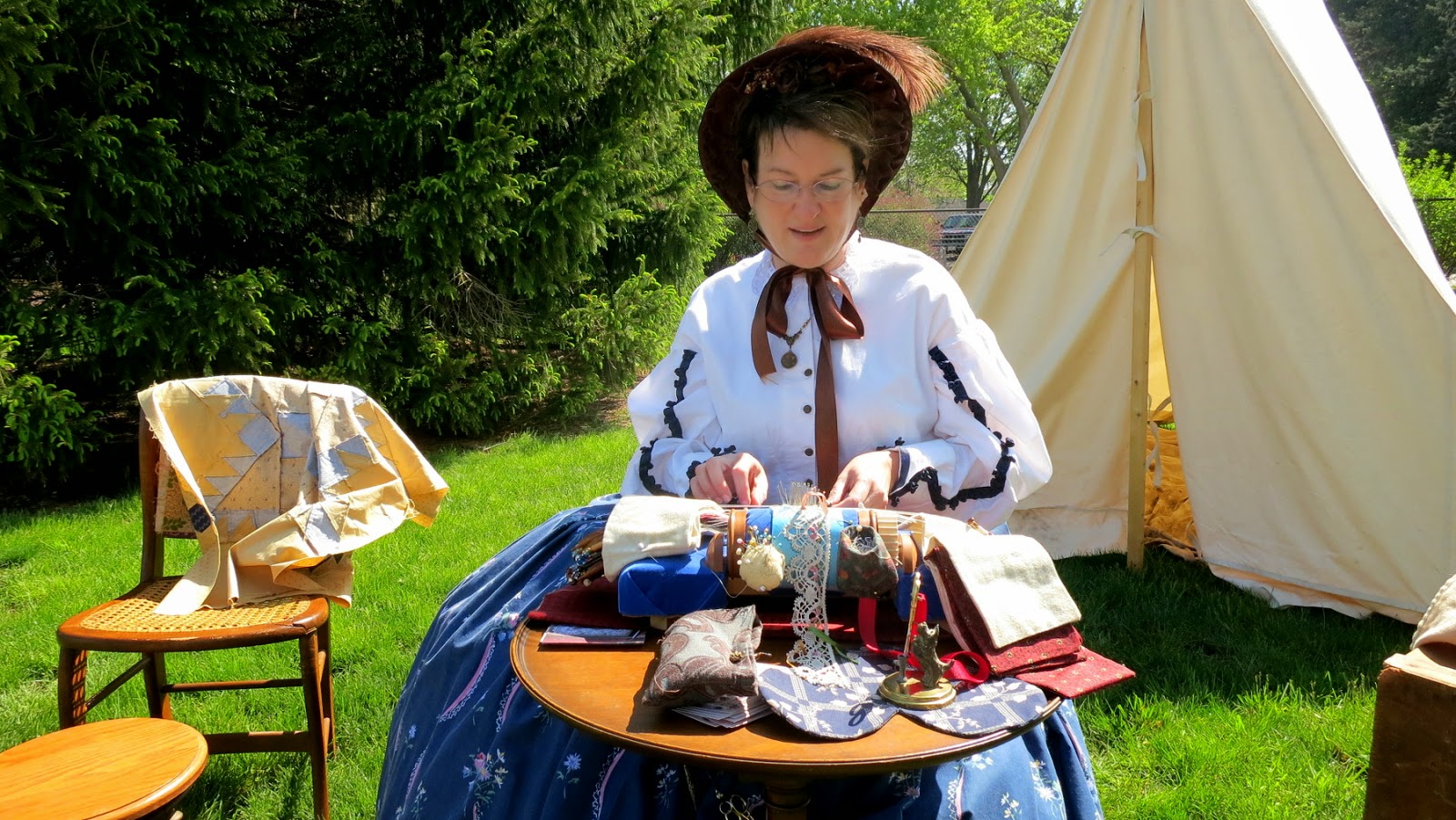 Moving on caused some problems with Zeke.  He started getting cranky and tantrumy.  I tried to get him to move along, but he seemed to shut down (his version of a tantrum).  I talked to him a bit, and it turns out he *really* wanted to go back to "that man who made the twisty metal things!".  A return trip to the blacksmith shop was promised, and we resumed our day.

We witnessed some 'ye olde ladies' dressed in their finest hoop skirts walk by... 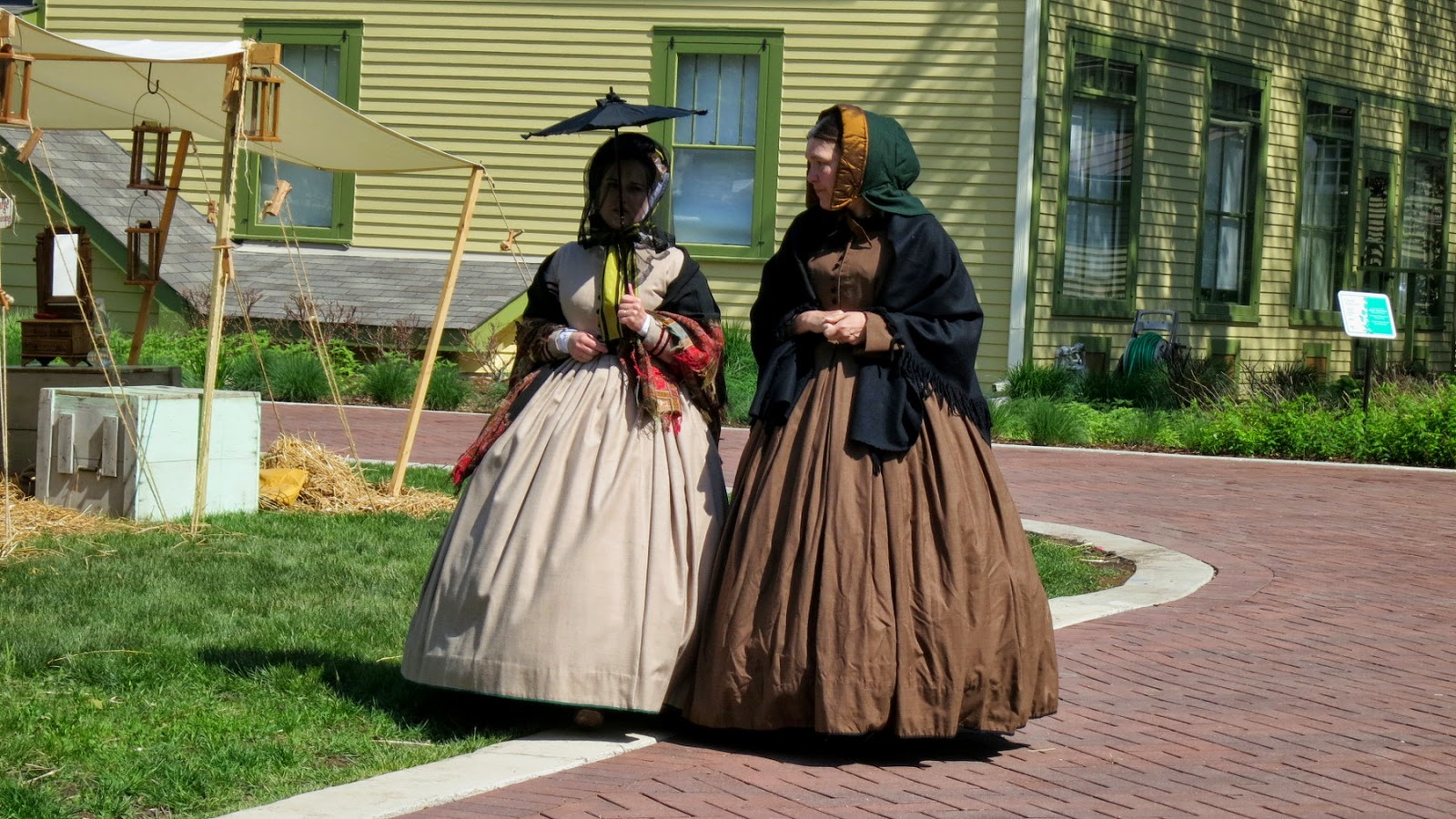 ... so we continued down the path as well.  We ended up on the Confederate side, watching a platoon doing drills. 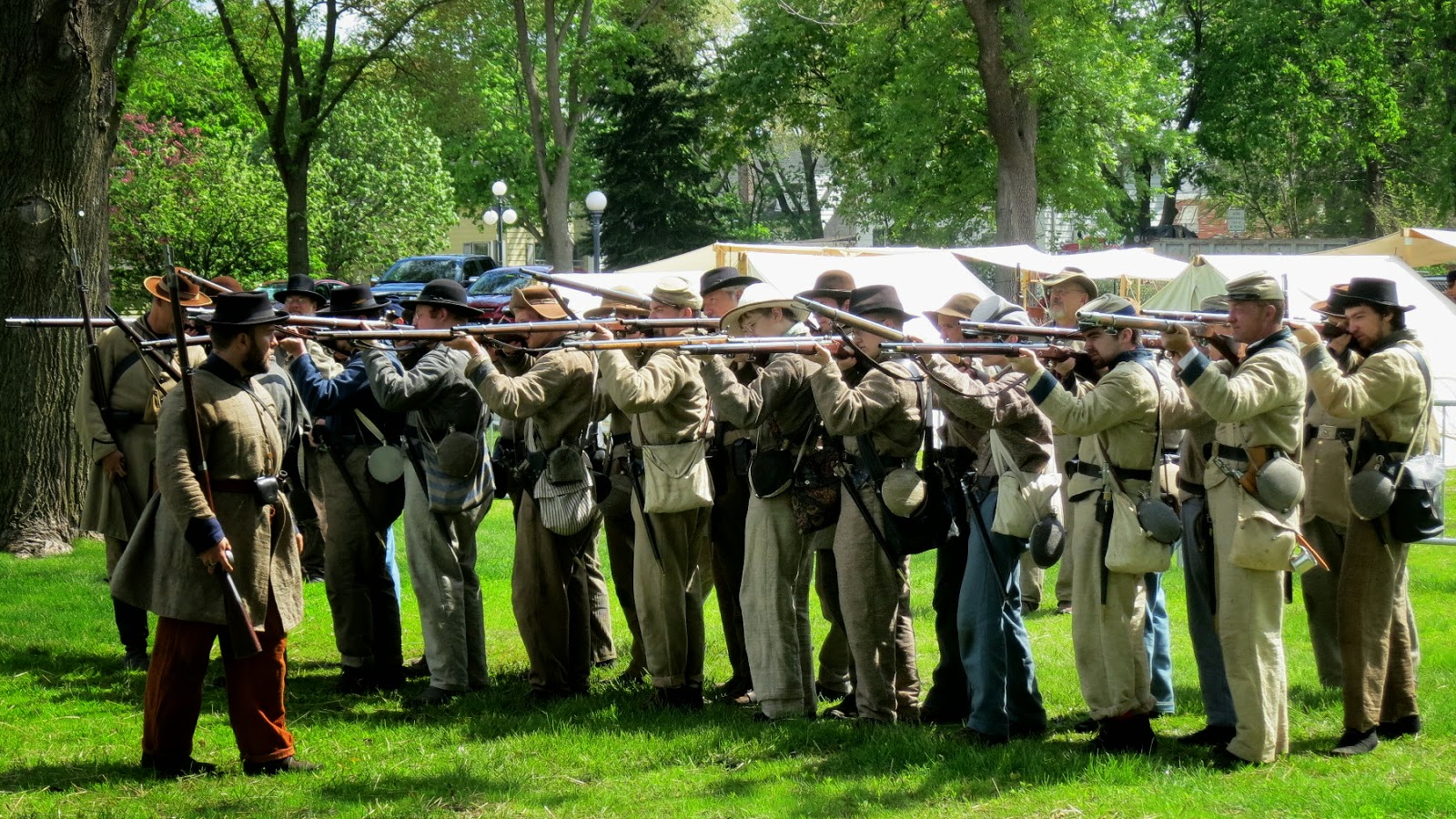 After watching the drills for a while, we kept going and crossed over to the Union lines.  The boys in blue looked very serious, and prepared to lay down a simulated whoop-ass on all those rebel scum. 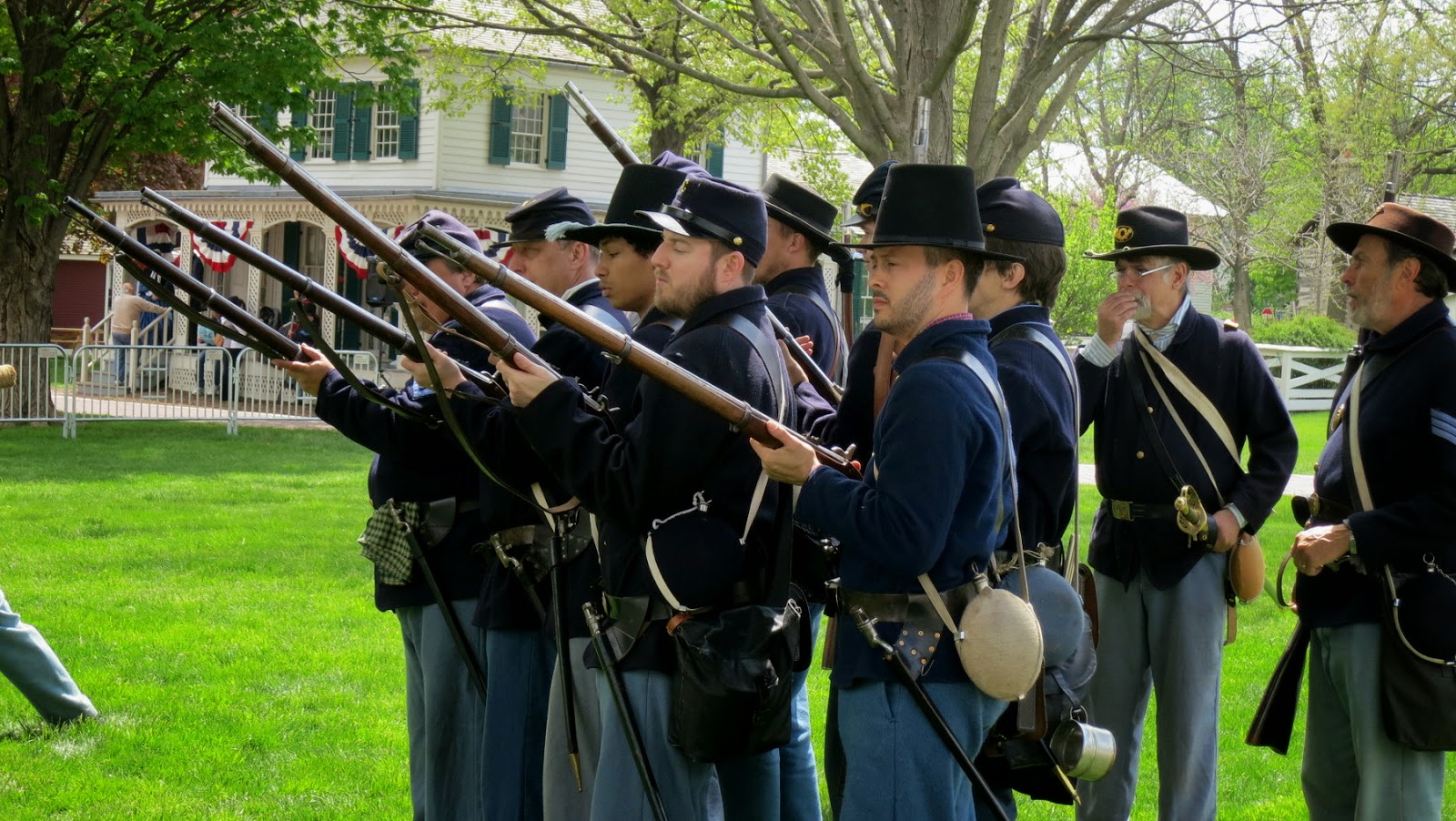 Eventually I moved on again, but as I walked down the path I looked behind me to see the Union lines advancing towards me.  I turned back forward to find a Confederate canon aimed at me (It's a trap!).  Turns out I was in the middle of a skirmish.  Yikes!  I ducked out of the way, but for a moment I was in serious simulated fear of my non-simulated life. 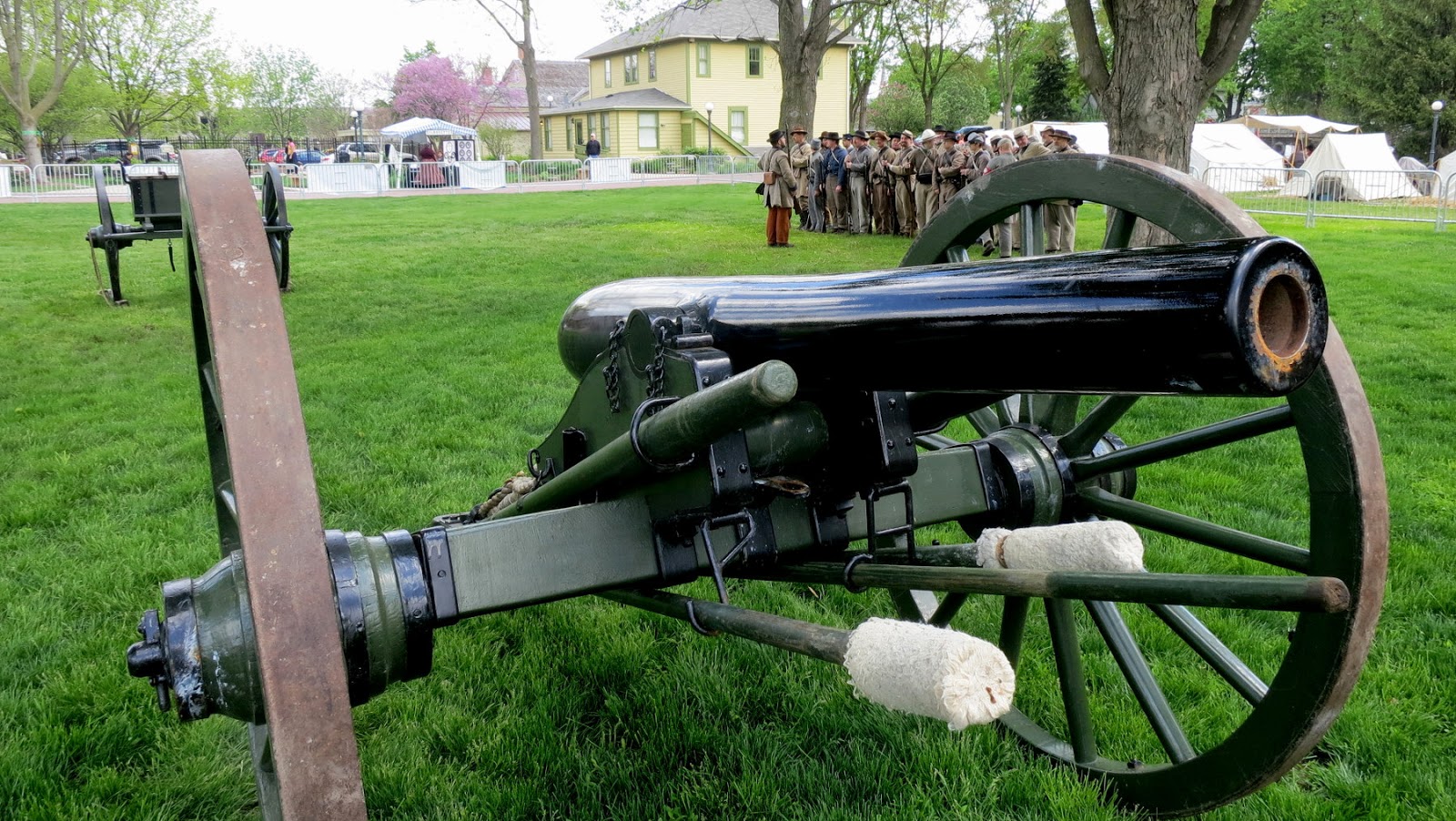 In re-enactments, as in life, the best defense is often running away in a panic, so I exfiltrated myself from my simulated precarious predicament and ran(simulated) down the path.  Soon I found myself in the midst of a confederate camp. 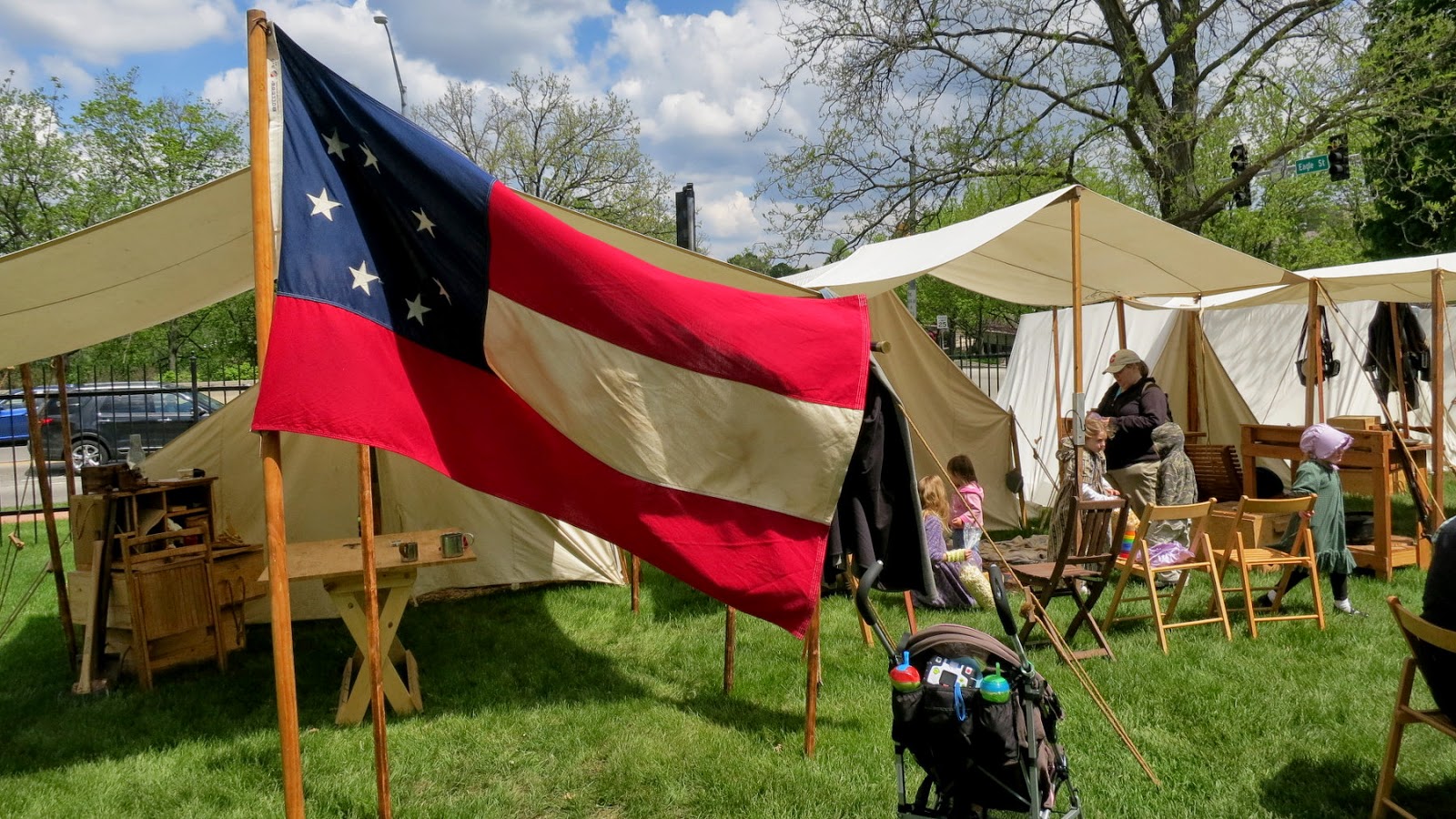 The third rule of war (the first being "never get involved in a land war in Asia", second being "never go in against a Sicilian when death is on the line") is "always make friends with the cook".  So I spent some time working on rule 3 by watching how food was prepared back in the day (This is the Confederates version of McDonalds). 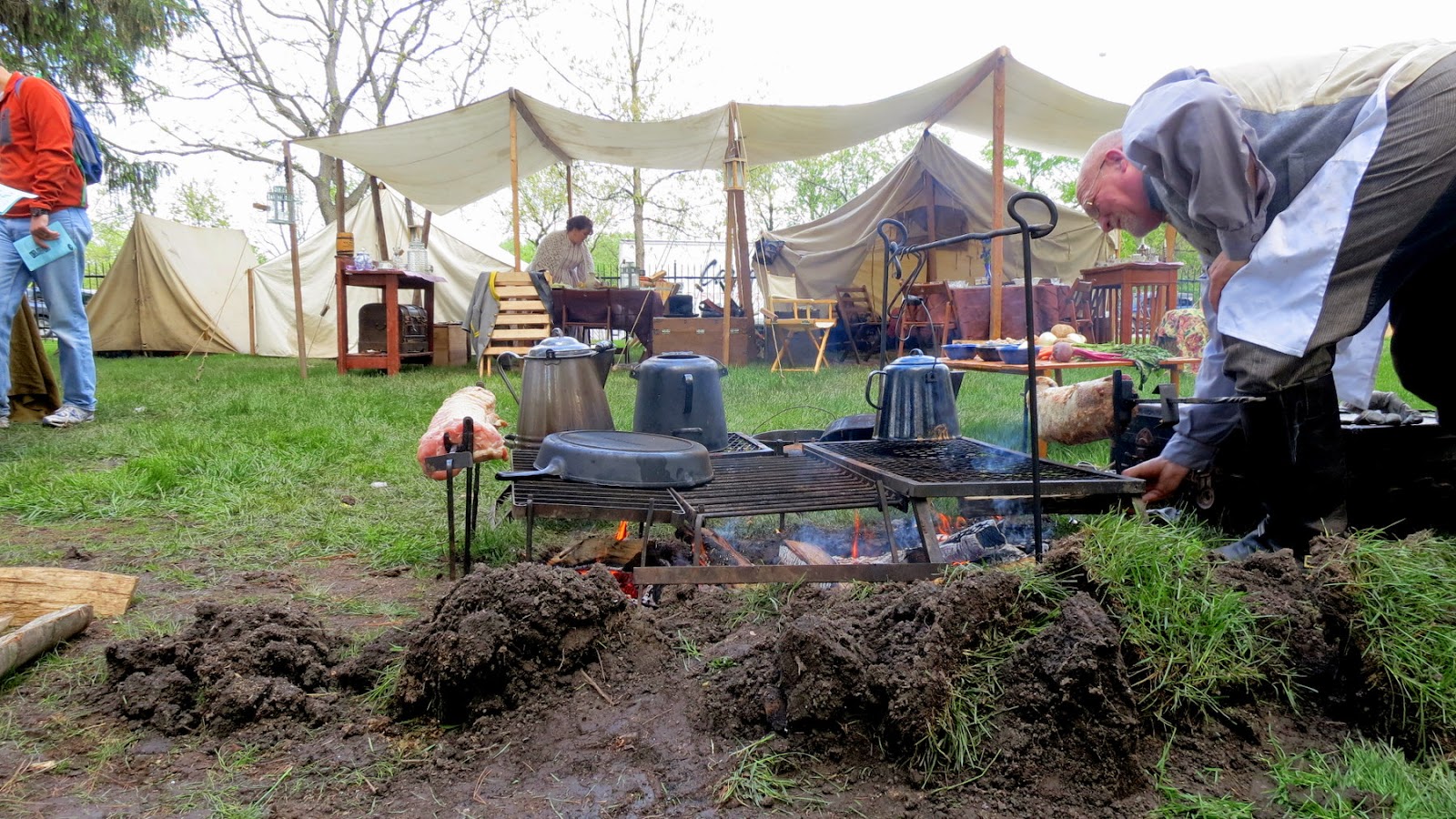 Oh, about those presidents.  An interesting artifact of the Civil War that I never really thought about before is that there were two presidents during the war.  Abraham Lincoln in the north, and Jefferson Davis in the south.  I shook hands with both. 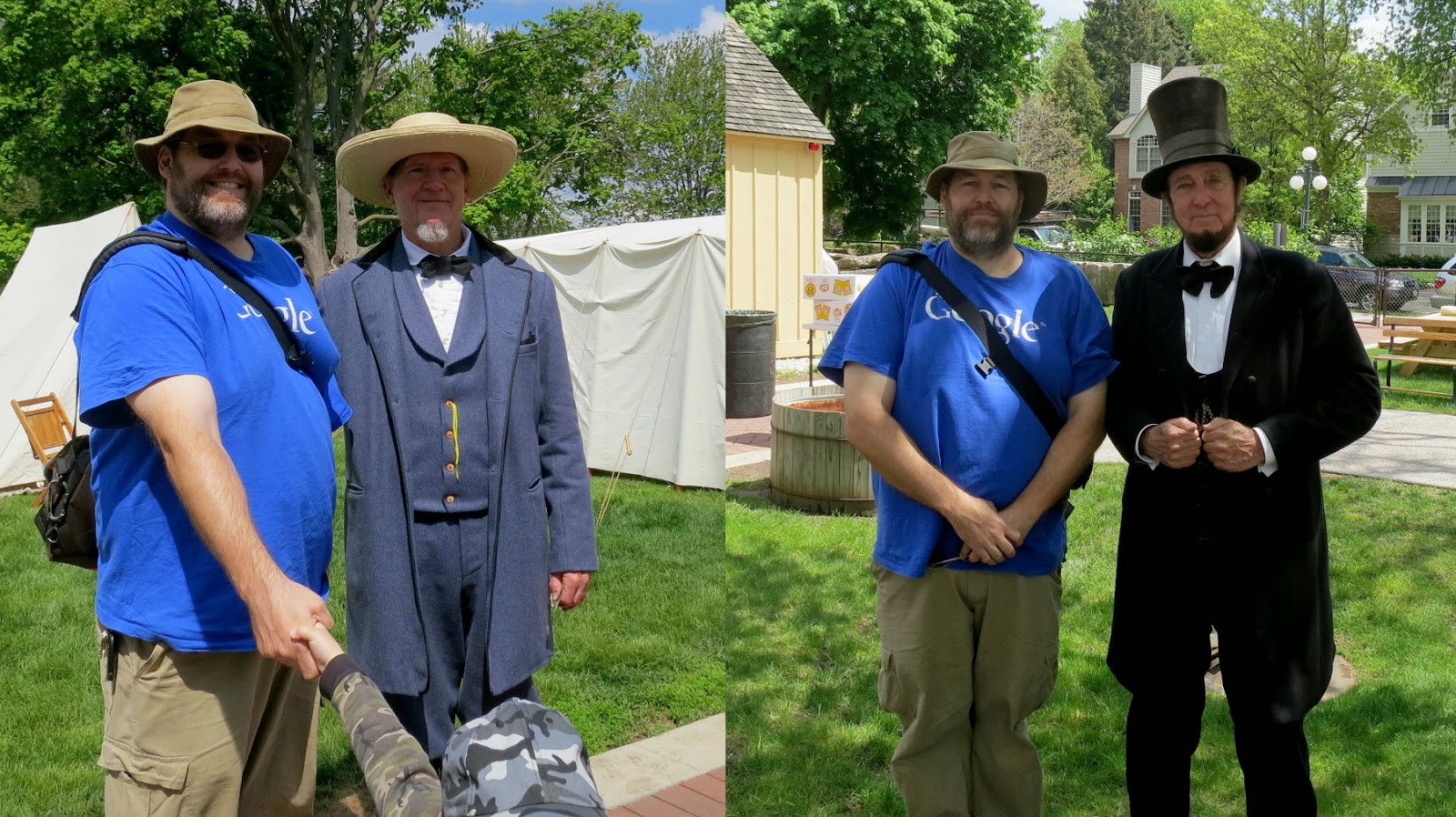 I even got Abe to quote the line from Bill & Teds Excellent Adventure: "Be excellent to each other, and party on dudes!" proving once and for all that Abraham Lincoln was the coolest president ever (even tho he declined my invitation to attend a play at the theatre that evening).

I wonder what adventures I will get into next.