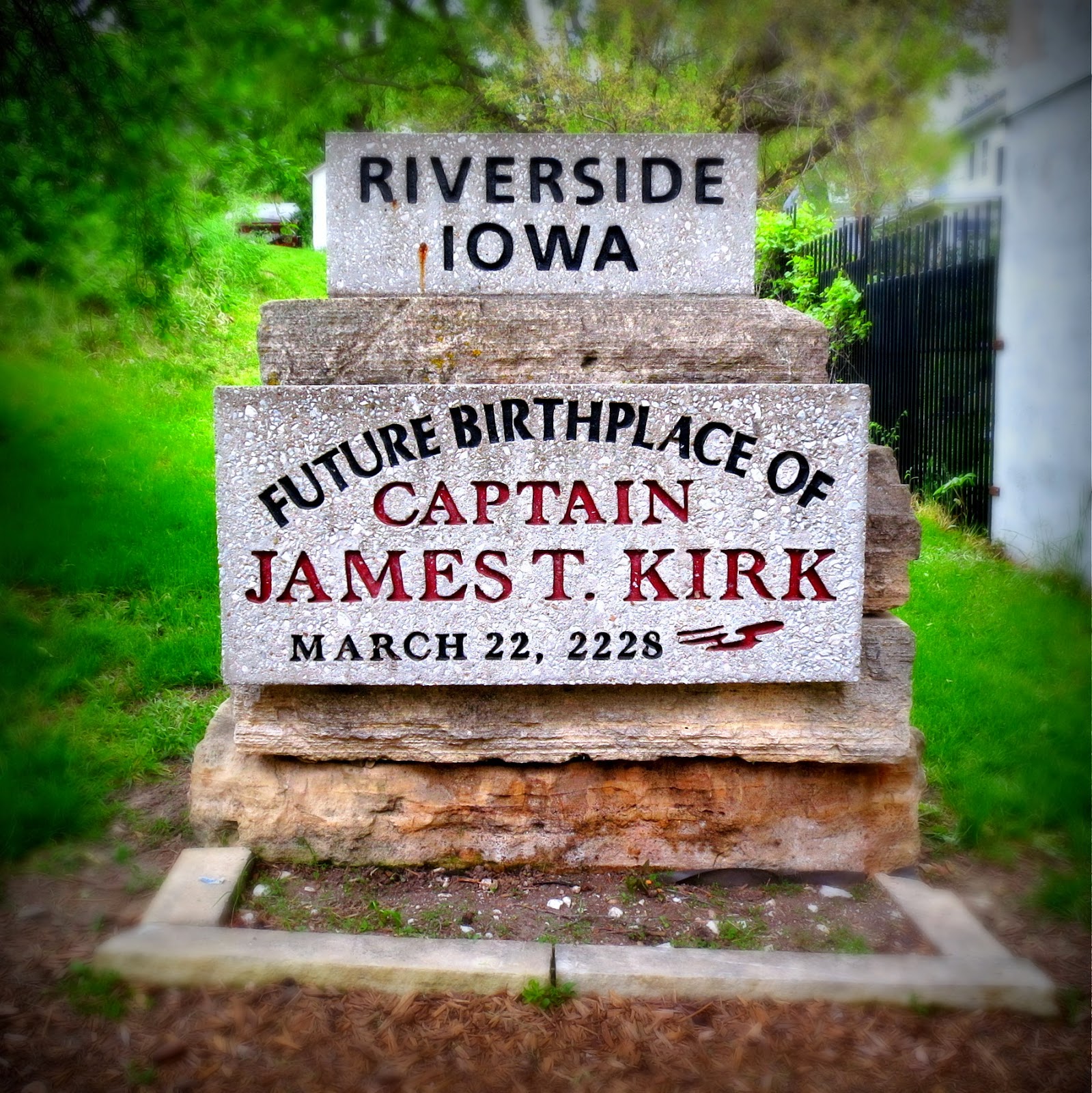 These are the voyages of the Geovan Of Destiny.

Its continuing mission: to explore strange new lands, to seek out new finds and new dramatizations, to boldly go where at least one person has gone before.

Not going to lie to you.  This post is all about geocaching.  Specifically it is about my adventures with a 3 stage multi-cache that celebrates the future-past of geekdom everywhere.

In Riverside Iowa there resides a stone marker.  It is not to mark the resting place of the dead,  but the future birthplace of a hero.  Our hero.  Captain James T. Kirk, USS Enterprise.

Spoiler alert: Like more classic Star Trek episodes, this one starts and ends on the bridge (if by bridge you mean the passenger seat of the Geovan of Destiny) and the middle is filled with drama, adventure, and just a little bit of humour.

The first stage led our crew to this rather cool looking model of the USS Enterprise.  It was christened the USS Riverside NCC-1818, so we know it is not the real thing.  The first stage is to gather information from around the site.  Gathering this information was quick and easy, and we were soon on our way to the second stage. 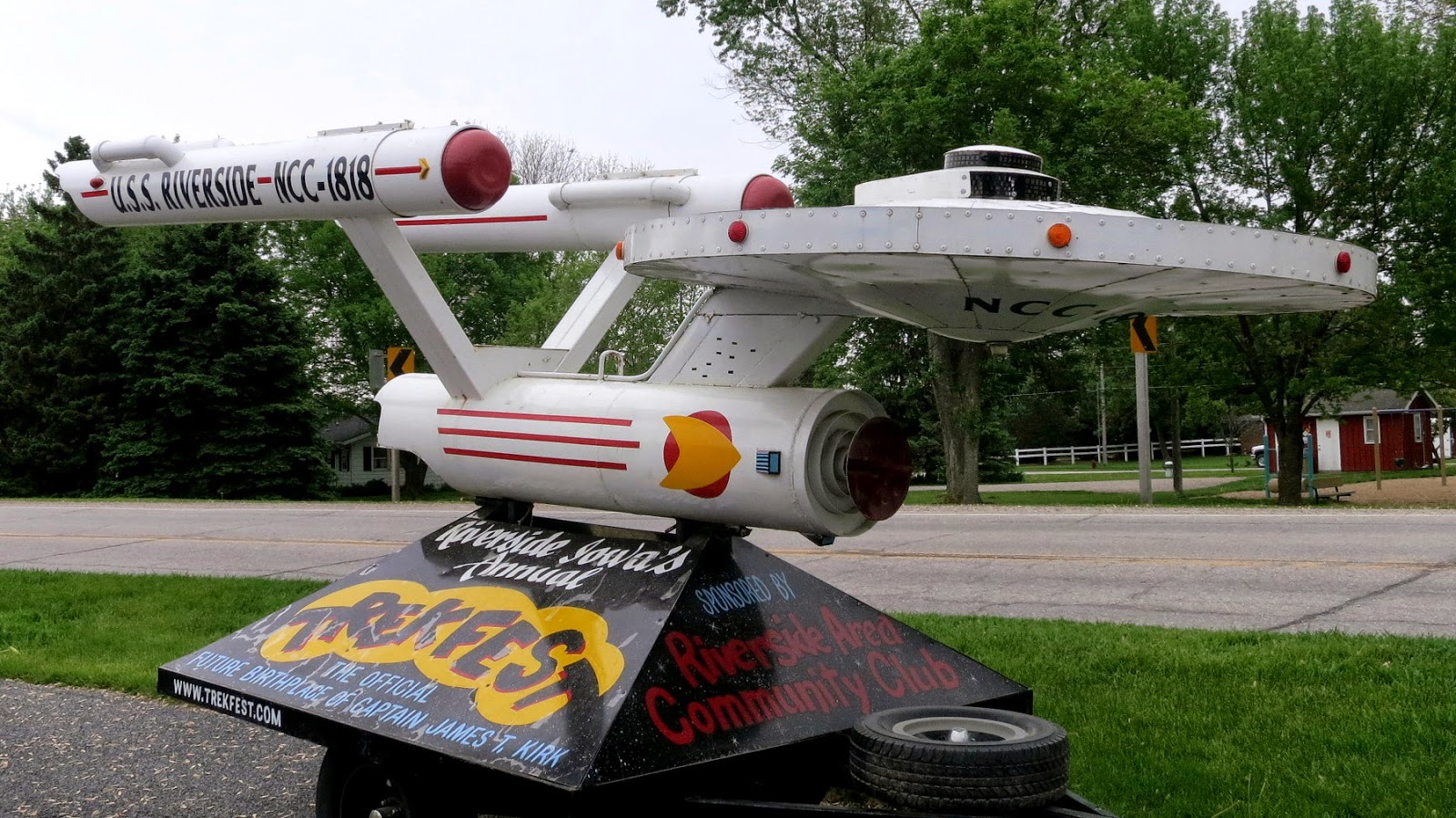 The second stage led us to the marker shown above.  Again, gathering information was quick and easy.  Unfortunately it also involved math, and that is where things started to go awry.

Really what happened is I assumed too much about the format of the data, and I ended up with an off-by-one error.  The first calculation led me to the front yard of a farm 2.5 miles away.  The cache description said clearly that the final was in a park, so clearly I made a mistake.

I ran the math over and over again, but came up with the same numbers.  On the fourth or fifth try I finally figured out my error and calculated new coordinates - which were in a park 0.3 miles from the second stage.

Sanity restored, I plotted a new course and we were off at warp speed (warp being re-defined as the posted speed limit).  We then found ourselves in a parking lot just over 0.1 miles from the cache.

Crew maintenance needed to be performed, so I formed an away team of one and headed down the trail.  Things were looking up, but they were about to take another turn for the dramatic.

The logs for the cache had mention of a fair amount of bushwhacking, so I was not overly surprised when 100ft down the trail my compass pointed me across a small creek up a steep hill, and deep into the woods.

A quick hop over the rushing water, and a scramble up the hillside led me to this view: 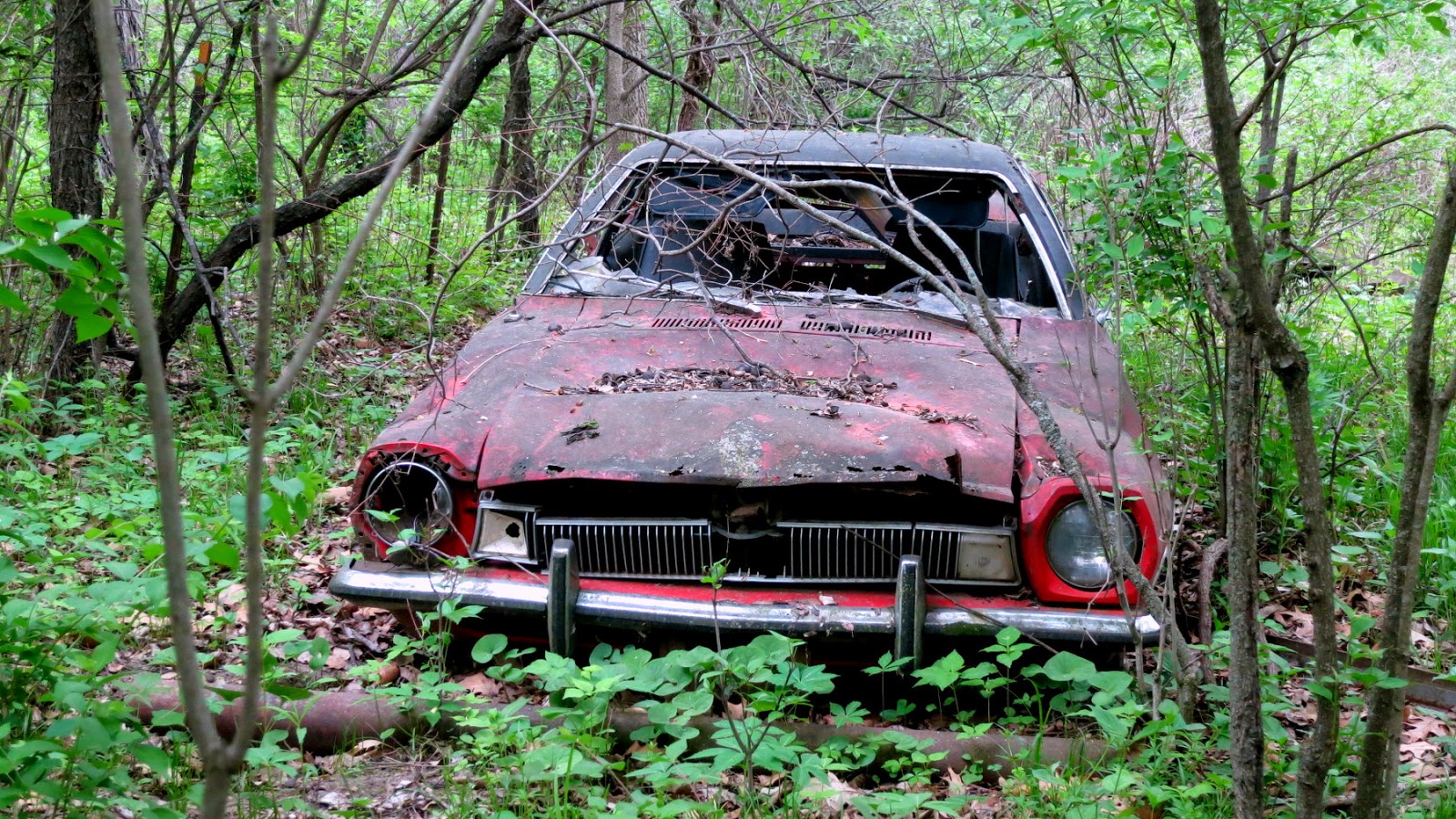 This was a cool abandoned vehicle.  Unfortunately it was just outside the park boundary, and the compass was pointing beyond it.  I was, after 200ft of walking, no closer to the cache.  It was at this point that I realized that my compass was not calibrated and was leading me astray.

A quick sensor recalibration later and I was back in business.  Unfortunately I was left on the wrong side of a creek bank, up a hill, 500ft away from the cache, with nothing but bushwhacking for a path.

These things seldom slow me down, and this was no exception.  I scrambled over and down the bank, jumped the creek bed, and finally got to ground zero a few minutes later, having turned a D2 into a D3 for no apparent reason but lack of foresight.

A quick hunt later and I soon had the cache in hand. 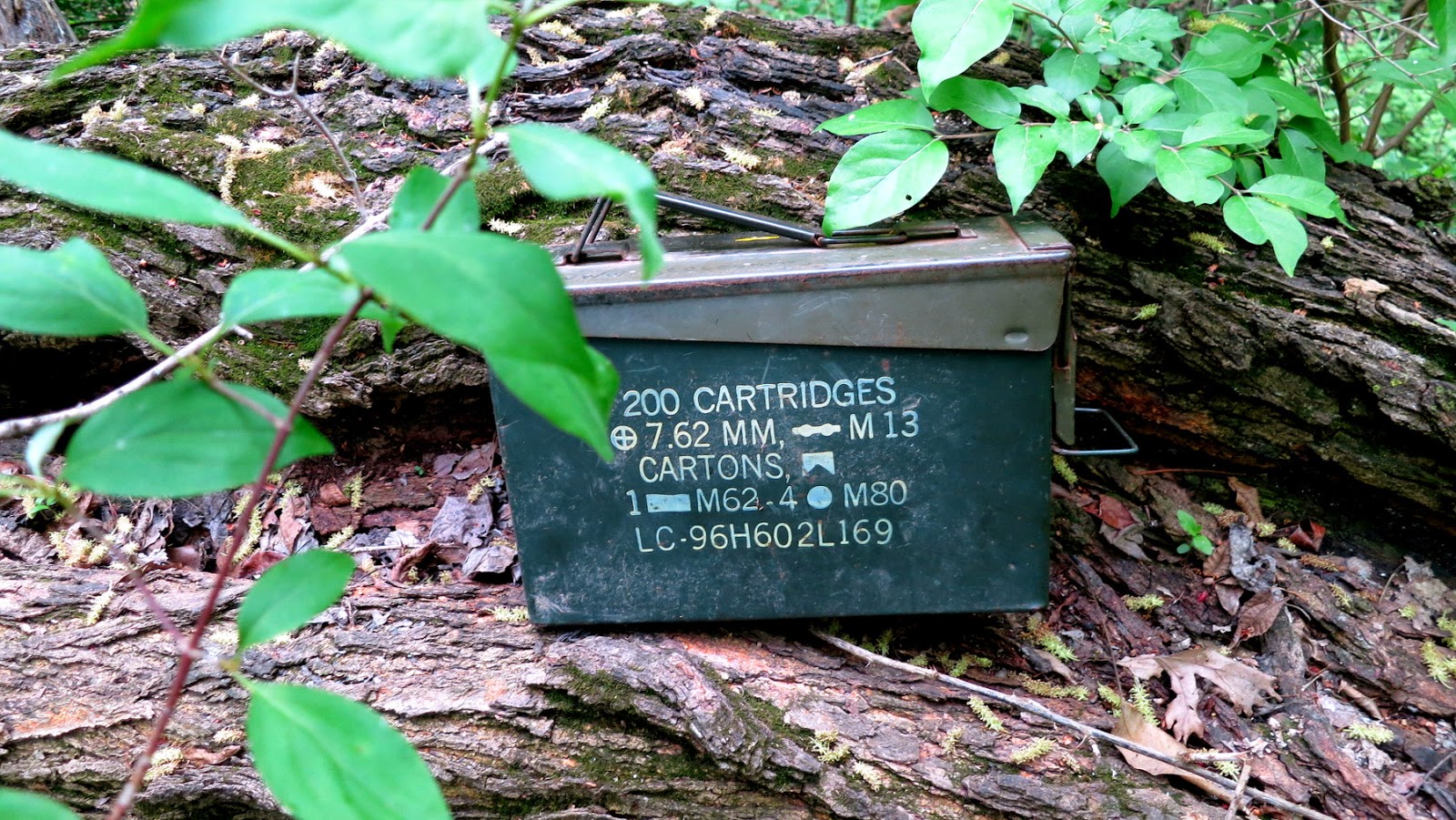 The log signed, and the cache rehid, I then walked down the perfectly cromulent path that led me easily back to the Geovan of Destiny.

This was one of the last caches I would find until we arrived at St. Charles for GeoWoodstock 12.  So with a dramatic declaration of victory we laid in a new course, and headed off at the legally determined safe warp speed.

A little later on I geeked out a bit and made this bit of fan art based on the model at the first stage. 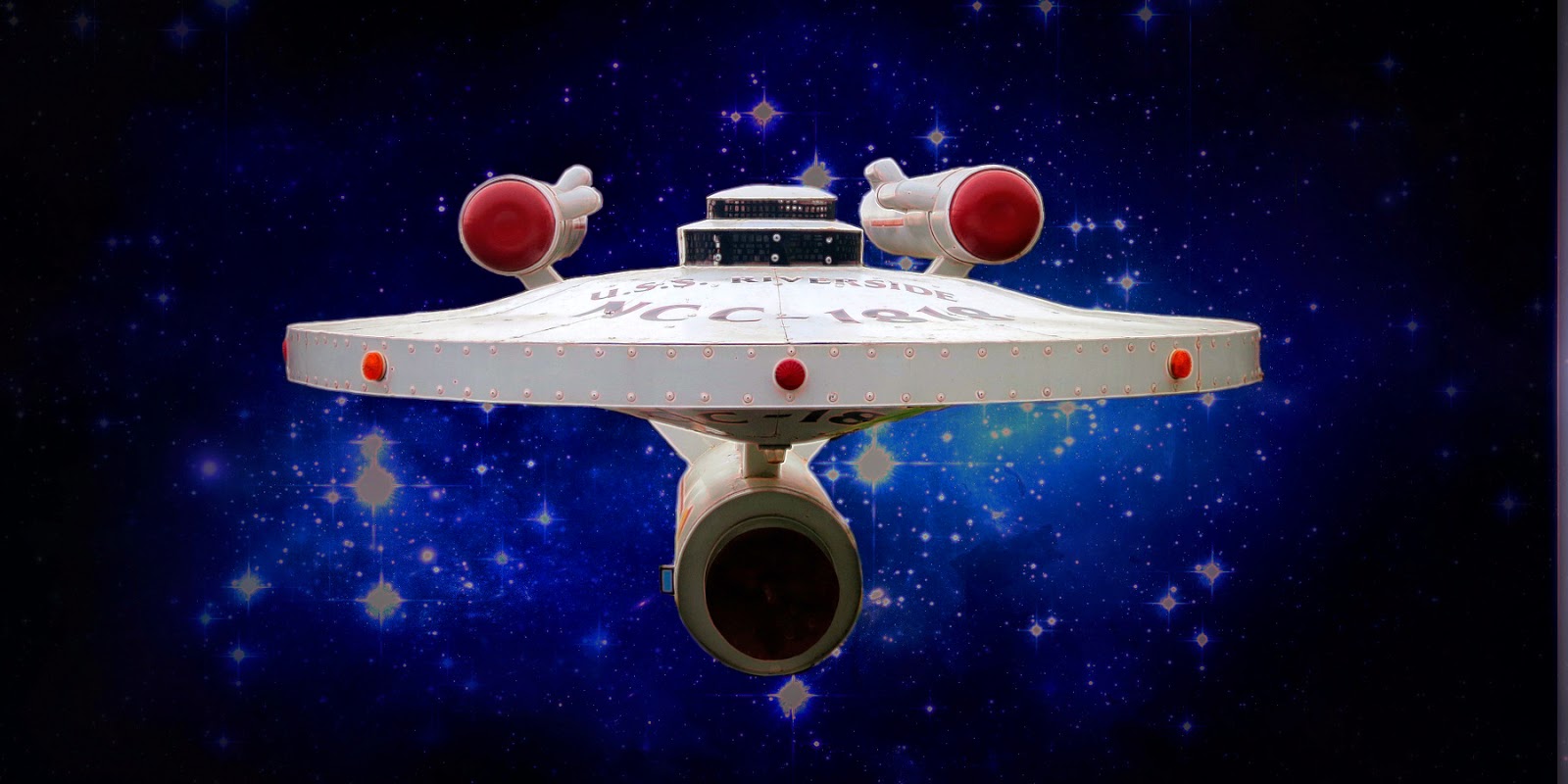 So the astute reader would note that this series was the road trip that brought us the long way round to GeoWoodstock.  However we still had to get home, so stay tuned for a couple more posts about the adventures of a family of bears as they return home from a week long adventure.
<== American Pickers | Bigfoot ==>
Posted by Dave DeBaeremaeker at 8:39 PM