A Day In Raleigh 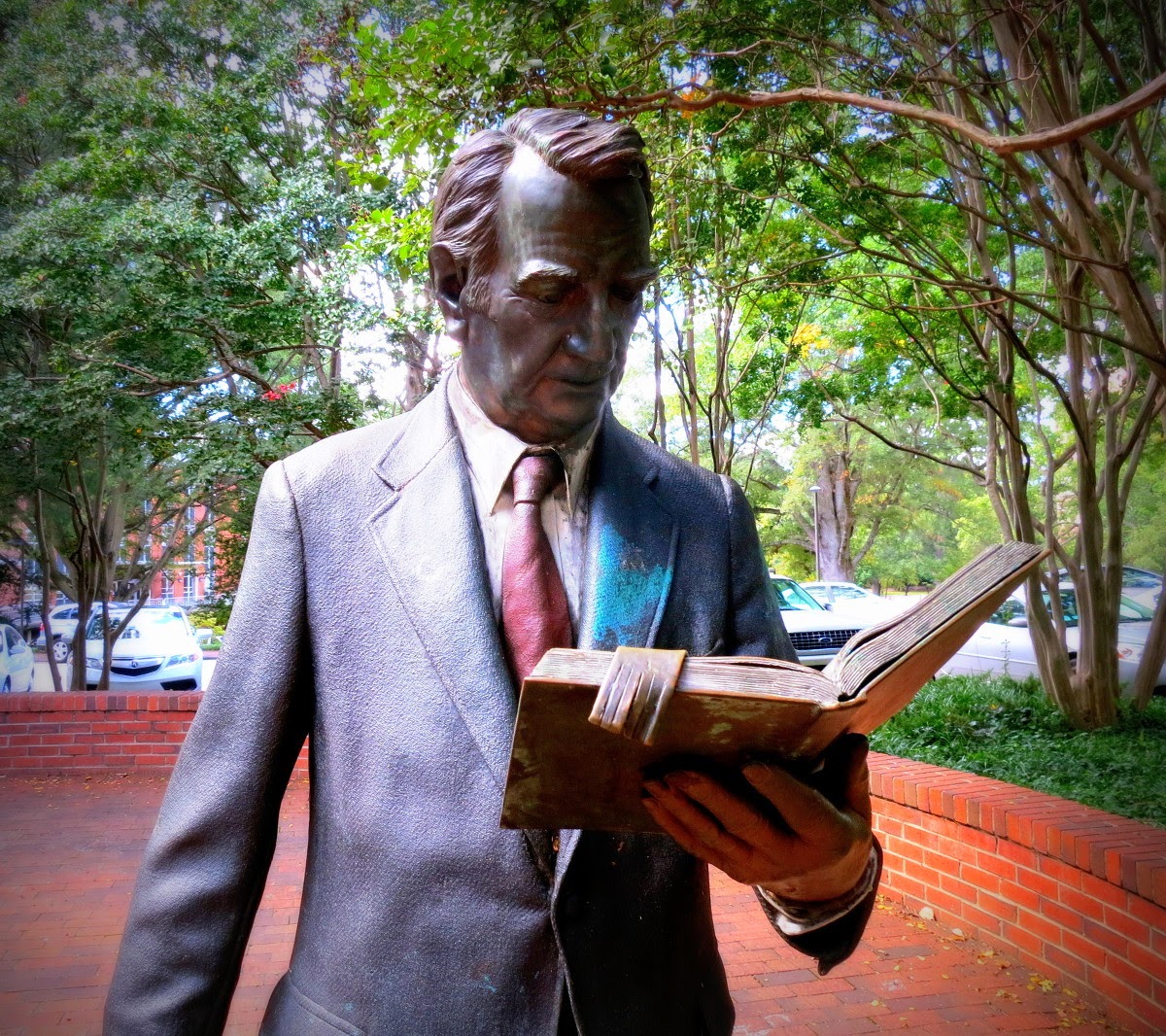 I spent this past weekend in the state capitol of Raleigh, North Carolina. Raleigh is 3 hours away from my house, and is home to a lot of great caches.

On Saturday I loaded up some of the highest favourited caches in the area and hit the road.  I ended up doing some funky caches, and seeing some interesting sights, which I present to you know, in no particular order.

On North Carolina State University (Go Wolfpack!) I did a cache that involved this statue of a professor.  This is one of the most detailed statues I have ever seen.  Some of the notable details include a watch where you can clearly tell the time, and you can clearly see the page numbers on the book he is reading.

I ended up doing a pair of caches, an earth cache and a virtual, near a rocky outcrop that contains a bunch of almandine garnets.  While there I got to hang out with a bunch of eastern fence lizards.  I even managed to get a picture of these fast moving creatures. 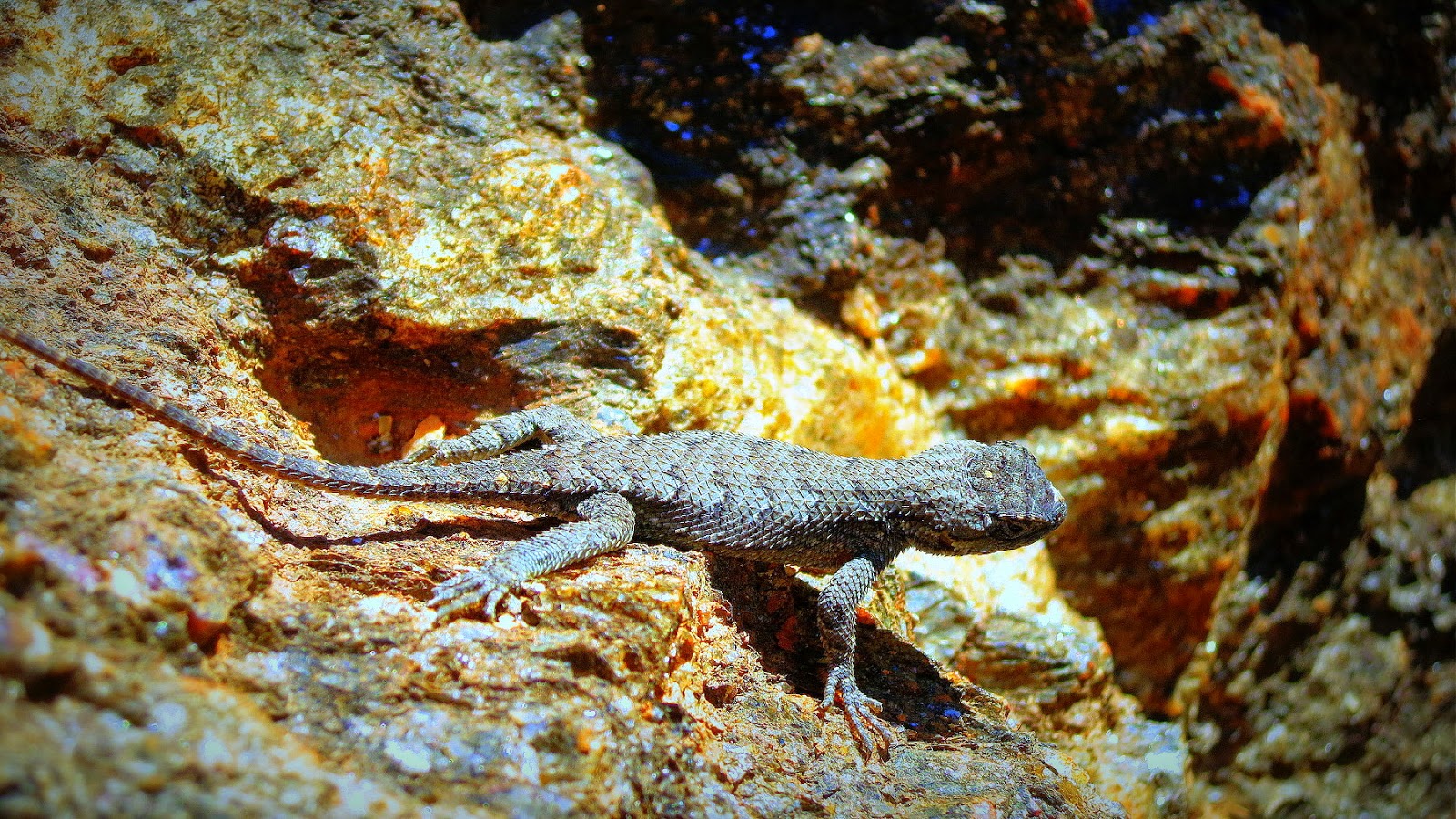 As it turned out there was a traditional cache across the road, so it ended up being a 3-fer - 3 caches within 90ft - not bad.

Somewhere along the way I did a cache beside this rather cool homemade tin man. 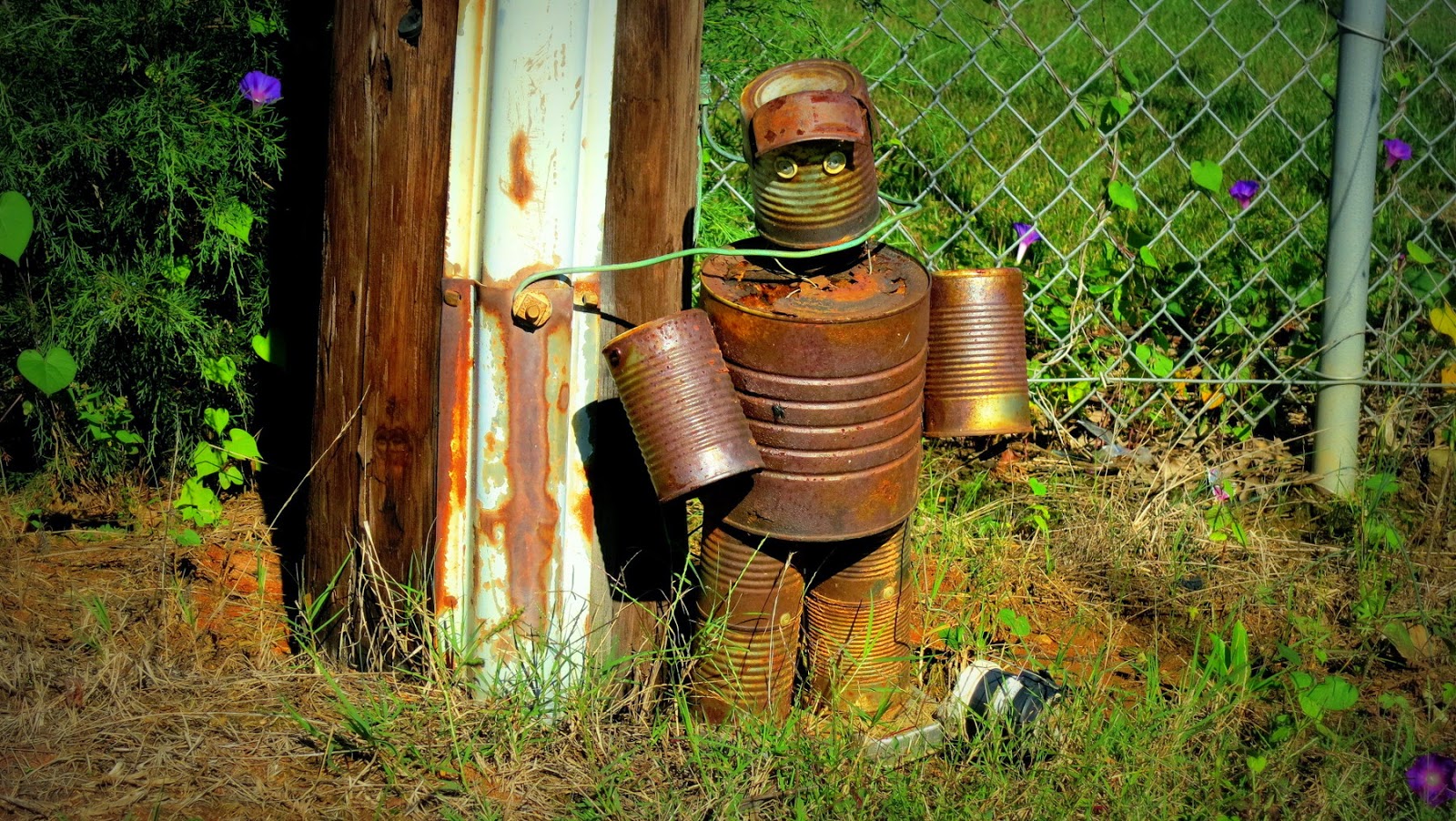 One of the more unique cache experiences involve caches hidden in libraries.  One of the several multi-caches I did that day involved a final in a library, in this case a cache hidden in a book. 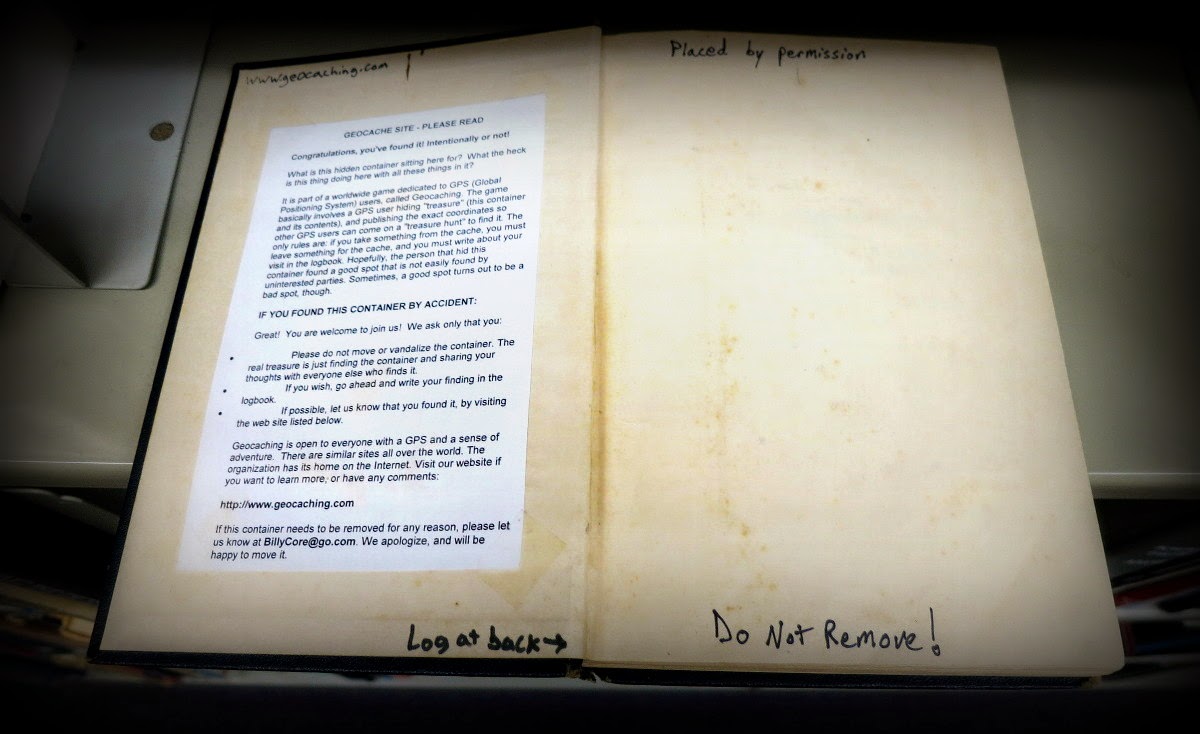 When I posted I was coming to Raleigh online, a cache owner suggested a new cache she placed, and another cacher expressed interest in hunting it with me.  So for about an hour I met up with NittanyDave and together we did a field puzzle named Snake Eyes.  It is a hard cache to describe without giving away spoilers, but let me say that it is a very challenging field puzzle, and the final is very thematic.  It is a well done cache all around. Highly recommended.

The last cache I did that day is called Milo's Garden, located at the JC Raulston Arboretum. The cache had a unique twist to the field puzzle.  To solve it, one has to follow directions (example: "look to the north, you should see a brick building.  Walk towards it until the paved path ends, then turn left").  Following these directions draws numbers on a GPS.  Very cool.

I followed the directions, and got to ground zero, but I ran out of time before I could find the cache.  So I left without a smiley that day.  However while walking around I kept thinking how cool the various paths and plants where, and how much my kids would like it, especially this dragon (named Sir Walter Snarleigh). 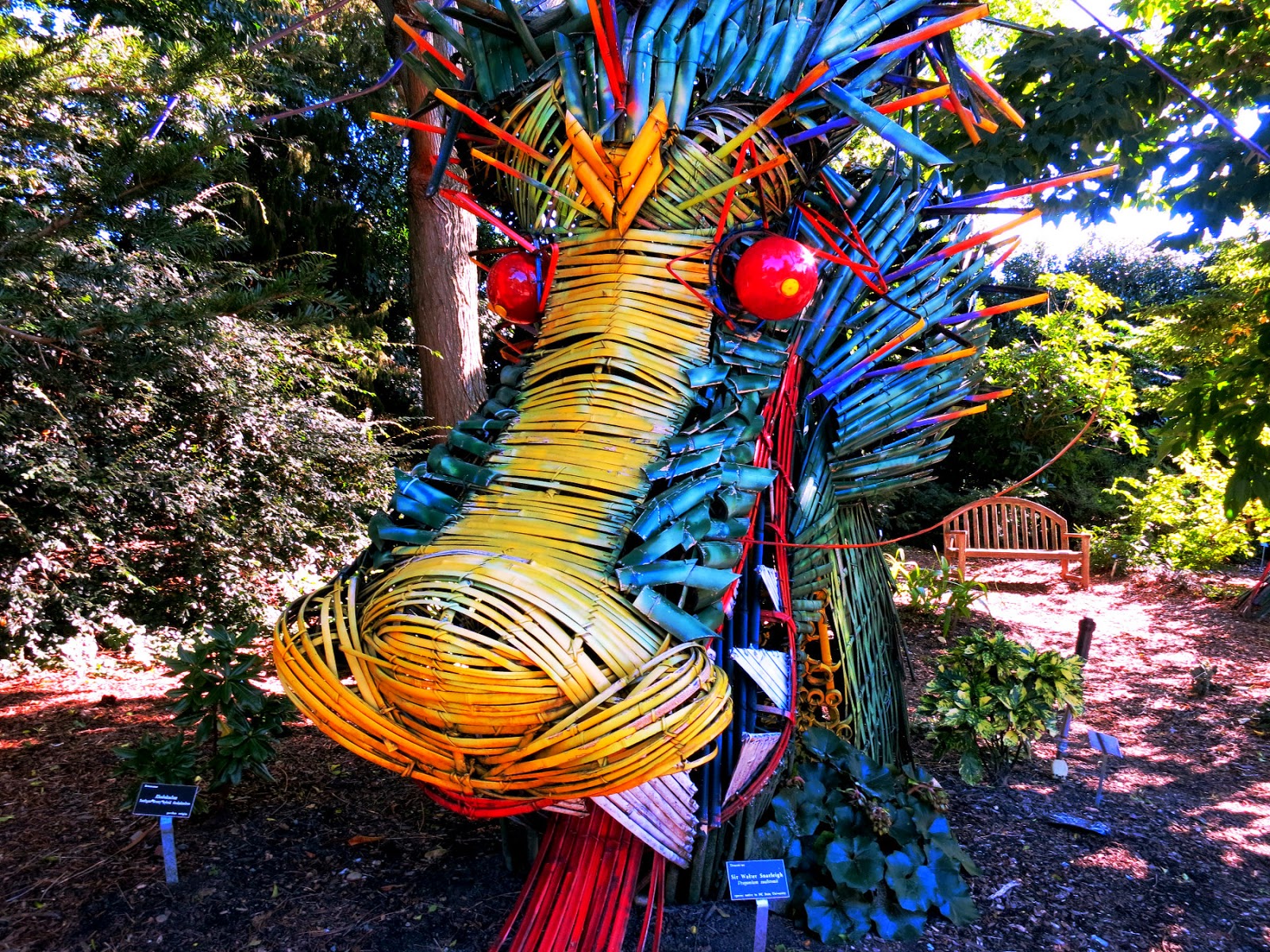 I mentioned it to my wife, and we ended up returning to the Arboretum the next morning  We spent a couple hours walking around and checking things out.  We eventually wandered back to ground zero, so I looked for the cache again.  This time I found it almost right away, and was able to redeem a DNF before heading back home (Its nice to tie up loose threads).  It was a great way to finish what turned out to be an excellent adventure in geocaching.
Posted by Dave DeBaeremaeker at 10:28 PM