It's All Just Trivial: Durham Edition 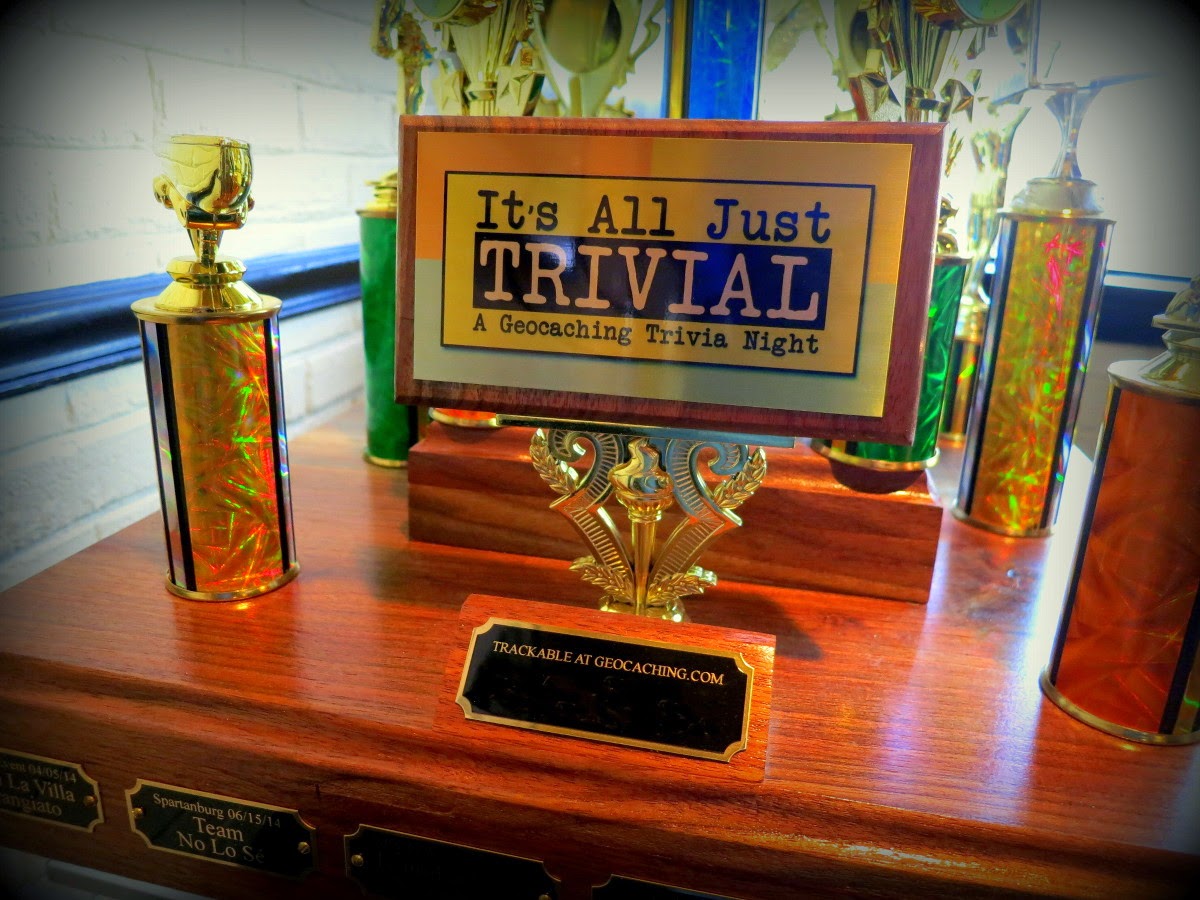 Luckily I live near a pair of geocachers who have been hosting a series of geocaching trivia events - roughly once a month-ish over the past year. I have been to four of these events so far, and each time I have a blast.

The events are called It's All Just Trivial.  They are hosted by my good geocaching buddies FailedApparatus and HoosierSunshine.

The most recent event that I had the pleasure of attending was held in Durham North Carolina on Saturday.

The trivia works like this: Cachers are formed into teams of two to six cachers.  During each of the first 6 rounds, a series of 5 questions are asked, and each team writes their answers on an answer sheet, which is then graded by FailedApparatus.  Each round is a different category.  Points are awarded for each right answer, and the winner of each round is determined by the team with the best score for that round.  Each round is worth 15 points.

The seventh and final round is a single question with 10 answers.  Each answer is worth 10 points each.   The ultimate winner is the team with the most points at the end.

This is our answer sheet from Saturdays event. 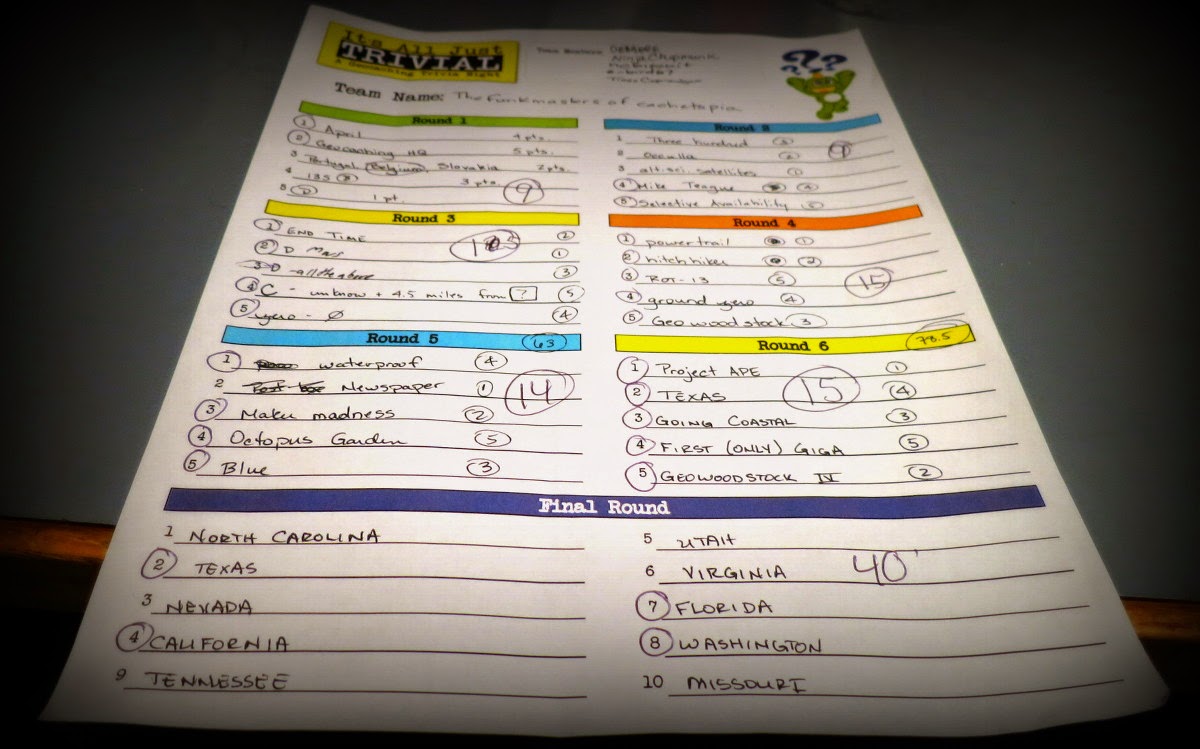 The team I was on, which we named The Funkmasters Of Cachetopia (against my objections, even tho I cane up with the name), did pretty well.  We were ahead on points after the first six rounds. However the last round we tanked a bit (OK, we tanked a lot. In my defense the category was The United States Of Caching, and I am Canadian, so we were severely handicapped. - we'll ignore the fact I chose the round, and spent most of my caching career in the US. It is still a good excuse, right? Right?!?).

In the end the team next to us, the Triviots, took the championship.  Congrats! We didn't end up winning the final prize, but we got lots of other prizes for winning several of the rounds (really, the event is swag central, with prizes for each round winner, and random prizes between each round).

The winner also gets their team name engraved onto the trophy, dubbed the Golden GeoPile: 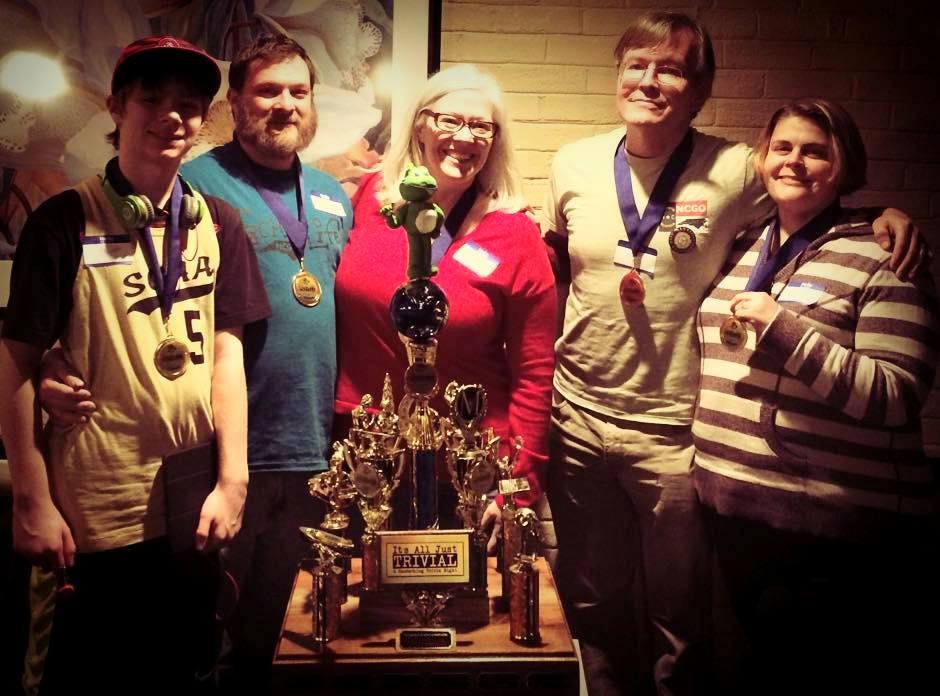 There does not seem to be an end in sight for It's All Just Trivial, with events already planned thru to  the summer, in North Carolina, South Carolina, Georgia, and Florida.  So if you are in the south, odds are an event is coming to an area near you.

It is literally some of the best fun I've had an an event (which is saying something).  Check out geocachingtrivia.com to keep up to date with the trivia events, and you too can enjoy the fun and excitement that is geocaching trivia.
Posted by Dave DeBaeremaeker at 8:28 PM