Anyone who has driven thru Gaffney South Carolina along I85 has likely seen a giant peach off in the distance.  I have driven that stretch many times and noticed it each time.  However I never stopped to explore, or photograph, the mysterious peach.

Apparently it has also been featured in an episode of House Of Cards, so you also may be familiar with it from there.

The last time I drove I85 it I decided it was high time I did something about this peach situation, so I pulled off at the next exit and proceeded to track down the story of the giant peach.

It is, apparently, called the Peachoid.  This is what it looks like from the distance (facing north): 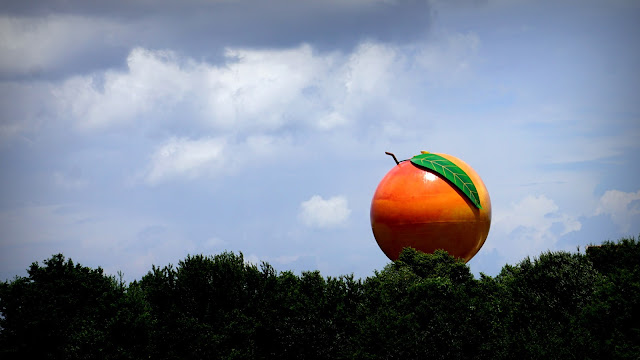 It is likely not a surprise to learn that the Peachoid is a water tower.  In fact it holds 1 million gallons of water (officially known as a metric crapton of H2O). 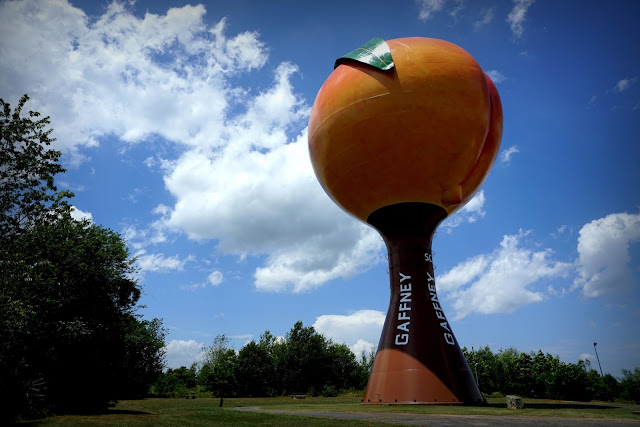 The reason why it is a peach is both an exercise in creative municipal budget management, and a snarky commentary about a neighbouring states adopted nickname.

The water tower was built in 1981 by the local municipality, but they wanted a way to use federal money, so they made it an art piece.

They made it a peach because that area, specifically Cherokee County, where Gaffney is located, grows more peaches than the entire state of Georgia, despite Georgia's adoption of "The Peach State" as their motto (Take that Georgia! (go Dawgs!))

It is for those reasons that I officially love this peach.  It is... (wait for it)... peachy.
Posted by Dave DeBaeremaeker at 6:55 PM