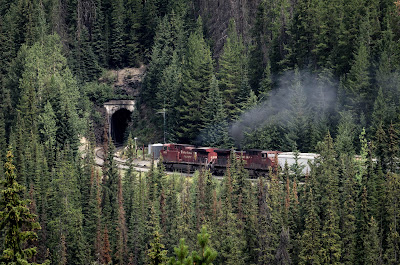 The railway holds a special place in Canadian history.   The building of a single uninterrupted line that went from the Atlantic to the Pacific is credited as being one of the major factors that brought all of the various colonies and territories, especially the western ones, together to form the country (ya know, back in the day - today it stays together due to NHL rivalries).

Mountains and railways tend not to mix very well as one prefers flat terrain, and the other is by definition very bumpy.  The Rockies are some of the bumpiest ones around.  As a result some pretty cool engineering has occurred during the building of the railways through the mountains.  One of these is the spiral tunnels.

The tunnels exist in an area known as the Kicking Horse Pass (so named because one of the surveyers was kicked off his horse there - sometimes place names are as obvious as they sound :). The pass had one area where they could not avoid a steep grade for the tracks.  Steep is bad in the rail world, and as a result there were a lot of accidents.  An engineer by the name of J.E. Schwitzer came up with an alternate solution, based on ideas used in Switzerland.  The idea was to make two tunnels in the mountains that were literal circles.  Each one was almost a kilometer in length, and had an elevation gain of  ~20m, thus trading distance for elevation, making the whole thing flatter and safer.

Parks Canada has some handy descriptions and pictures here.

So when we were driving thru on our Great Canadian Road Trip we stopped by an overlook to check out the tunnels for ourselves.  The tunnels are still actively used  today, however there is no posted schedule of trains, so they come at random times, but the Internet says on average trains come every 30 minutes or so. So we decided to wait and get some pictures.

Yet more waiting... nothing.

An hour passed by and there was no sign of the trains.

We had places to be that day, so we decided to lick our emotional wounds of train defficiency, and move on.

We drove about 30 klicks down the highway when we passed a train going the other way, towards the tunnels.  I made a command decision, pulled a U-turn at the next safest spot, and beat the train back to the tunnel (turns out I had plenty of time as we still had a wait of 30 minutes before the train arrived, but at least we knew one was coming).

We took some photos. Notice how the train is going one direction at the top of the frame, and another at the bottom.  That is the same train. 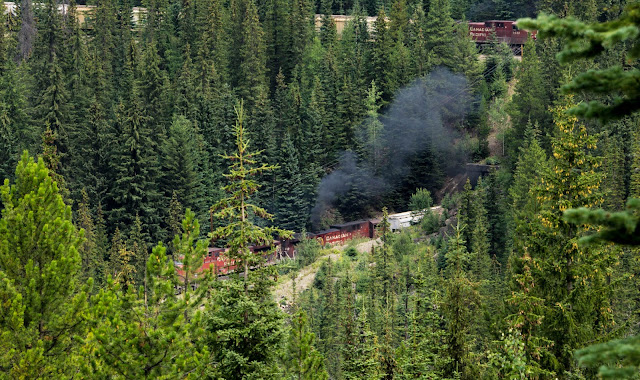 We could actually see the same train going in three different directions at once, all spiraling in on itself, however the third section was not very photogenic due to a lot of tree cover.

Once the train left, we moved on with the next stop.  However this experience remains one of the cooler man-made things I experienced during this trip.

Trains are cool.
Posted by Dave DeBaeremaeker at 9:38 AM