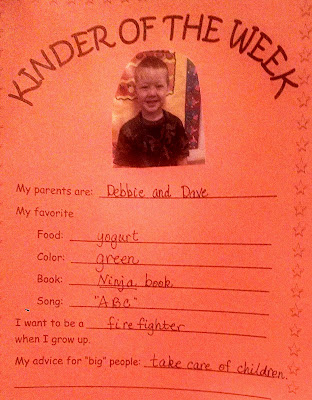 My son is starting to show signs of deviousness.  A case in point:

Last night it was pointed out to me that he was Kinder Of The Week, and he had this profile filled out.  It is full of basic kid stuff, and the entries were not really a surprise to me, until I got to the second last line: "I want to be a ______when I grow up".

Now, I know my son, and I know his answer to this question is Green Ninja (the hero from the show Ninjago), and has been his answer consistently for well over a year now.  So I was a rather surprised when he listed "firefighter."

So I asked him about it.  His response: "I was being tricky.  Ninja's don't say they are ninjas."

Also, I notice that he still left clues as to his true passions in life (look at the Color and Book lines).

He's gonna do great in life :)
Posted by Dave DeBaeremaeker at 8:07 AM