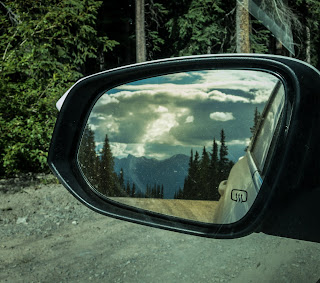 If you work for Hertz car rentals, please ignore this post.

Today (and by today I mean the story being told today, not actually today, as the story actually happened back in July), was bookmarked by taking a rental vehicle in places where one shouldn't really take a rental car.

My wife and I woke up in Kamloops BC, grabbed some Timmies, and headed down the Trans-Canada highway heading east, doing some geocaching and exploring along the way.

The first cache was at the Kamloops tourist bureau.  The second was an awesome Lego themed cache down an abandoned road, which was being used by the local ambulance folks to do training - so I had to dodge their training (at least I didn't need to worry about being out of reach of medical help should I have needed it).

The third was supposed to be a leisurely drive to an overlook that "totally can be done by a normal car".  Since Hertz "upgraded" me to a Toyota Highlander SUV, I was like "no problem!"

Turns out, a bit of a problem.  The cache is up a one mile dirt road that maybe could have been driving by a truck with some care... however in a rental (one thing I learned, rental cars come with crap tires and are poor substitutes for actual decent cars) not so much, and since I didn't want to risk damage, or getting stuck, I we decided to pull over and walk up the rest of the way (about a half mile or so). 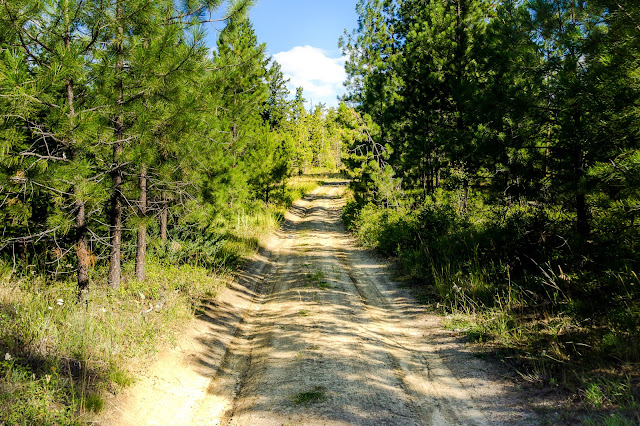 So we marched.  It  was basically all uphill, and at a higher elevation. It nearly broke my wife, but I kept going and got to the top.  I was greeted with some awesome views of the Thompson River. 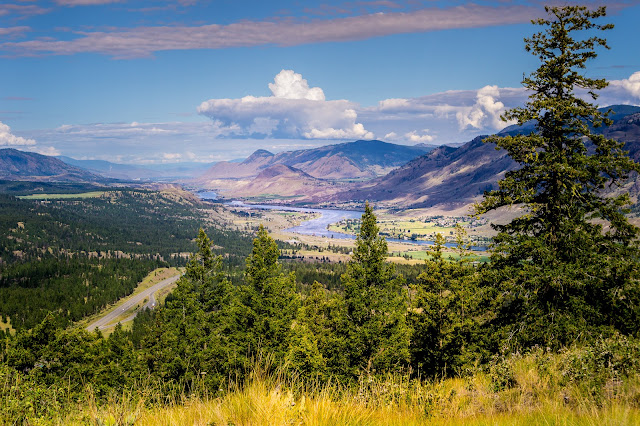 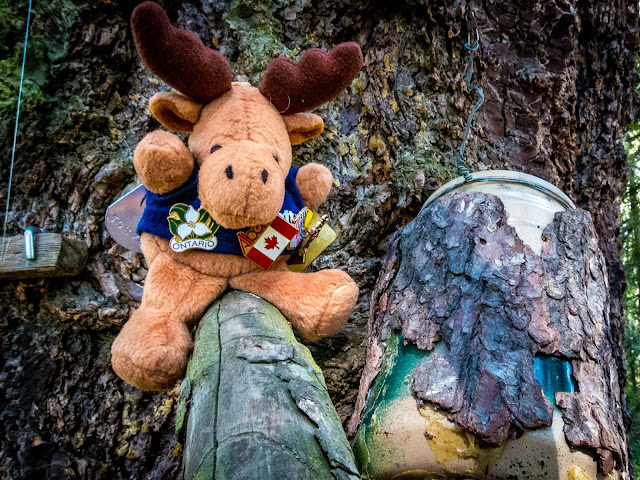 We then arrived at a pivotal moment in Canadian History (tribute).  The location of the Last Spike.

So way back in the early days of Canada (like during the term of office for the very first Prime Minister, Sir. John A MacDonnald), it was determined that a railway was needed to go all the way from the east coast to the west coast in order to properly unite the country.  So bils were passed, funds were funded, plans were hatched, bribes were paid, and a railway was built.

This location was where the last spike was ceremonially hammered into place, completing the railway (however there are apparently 4 locations that claim the Last Spike for various reasons and interpretations of what qualified as "coast to coast", however this one was the one I arrived at, and its in a place called Craigellachie, which is a great name, so I am declaring this place the official location - besides, it has a multi-cache, so it wins).

Appropriately as we gazed upon the memorial plaque, a train thundered by. 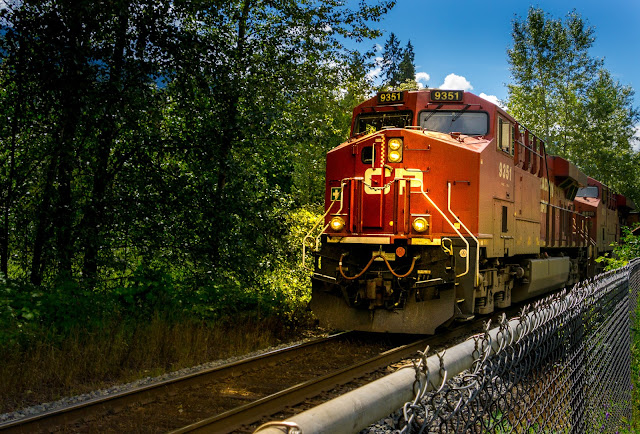 Once we waxed historical, and signed the cache log, we headed to Revelstoke.

Why do I care about Revelstoke?  Because its mentioned in a Corb Lund song, so I heard of it, not to mention it us super fun to say "Revelstoke" (try it... all together now... Revelstoke... see what I mean?)

Anyway, to continue on irrelevant details, Revelstoke has 3 bridges.  This is one of them. 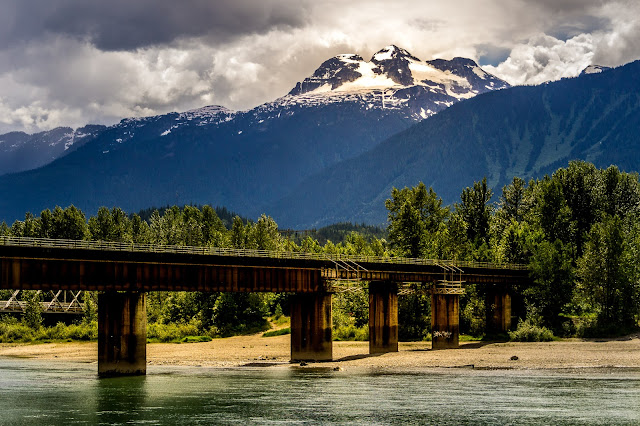 It also has an A&W.  Let me tell you, when you have faced the wilds that is the B.C Interior, this sight is like an oasis to a parched nomad in the Saharra. 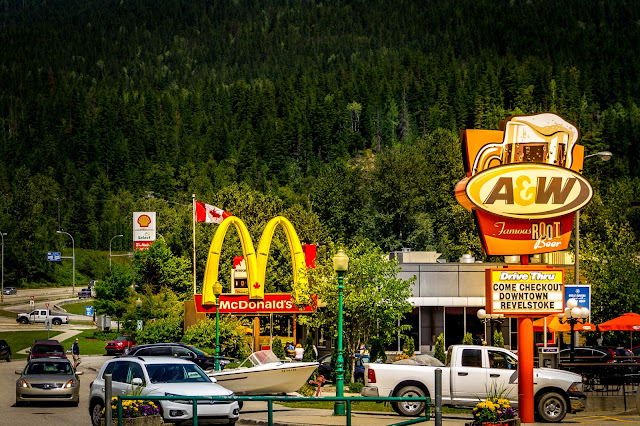 We ate lunch in Revelstoke (ah, Revelstoke), and hung out a bit by the river, then we kept going up Rogers Pass.

Rogers pass is named after a guy named Roger, which is super unexciting (unlike the upcoming pass: Kicking Horse Pass, which was named because a guy got kicked by a horse there - gotta love how things are named, eh?) 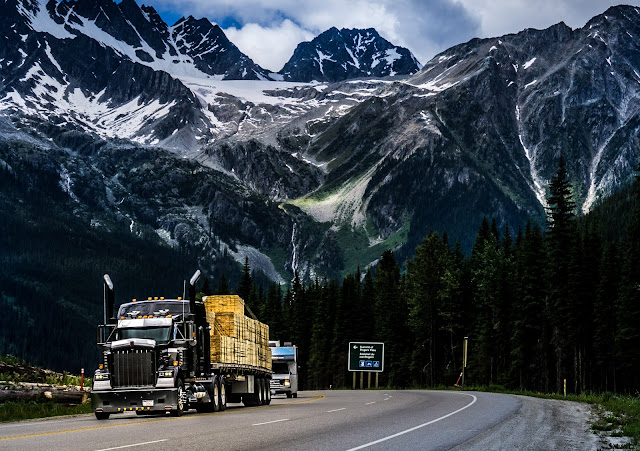 Right around this shot is where my wifey feel asleep and took a nap, so I kept driving like a well behaved maniac.

We also crossed the timezone into Mountain Standard Time.  I love crossing timezones because it means you've been somewhere.  (Also, if you cross one while your wife is asleep beside you, it confuses the heck out of her when she wakes up: Sweetie, look how long you slept!"

It was at this time that we arrived in Golden B.C, the place where we were destined to spend the night.  However instead of taking a right to the hotel, we went left in search of a geocache.  The cache was up the top of a mountain up a long narrow gravel road.  It was only 1 mile away when we turned onto that gravel road, however it took us almost an hour of driving to get to cache, because that road was windier than things less windy than it.

It did lead to some fantabulous views tho. 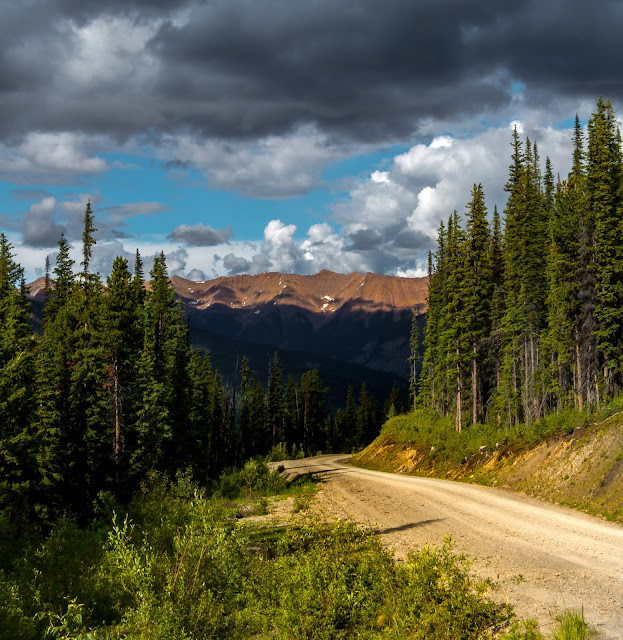 The road was also dustier than things less dusty than it.  So we had to wait for the dust to clear to get shots, but it was worth it. 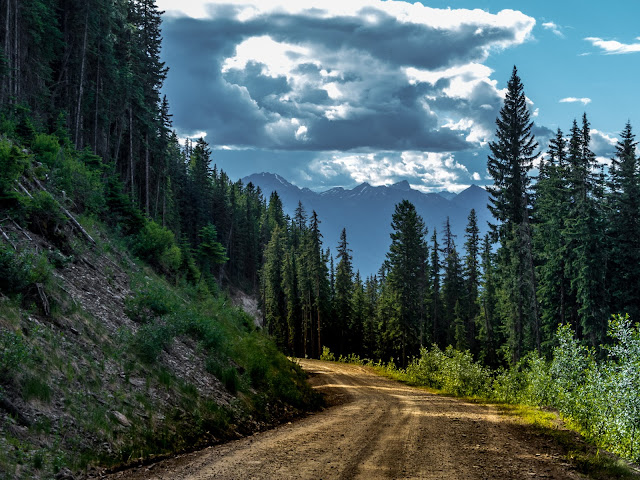 Once at the top it was another hour down to the town.  Once there we celebrated by doing laundry (no one said everything with road trips is glamorous), then we hit the hotel.

Today was scenic.  Tomorrow promises to be scenicer.  For tomorrow we go to a Field, and then tackle the Icefields Parkway.  Should be epic.
Posted by Dave DeBaeremaeker at 7:34 PM