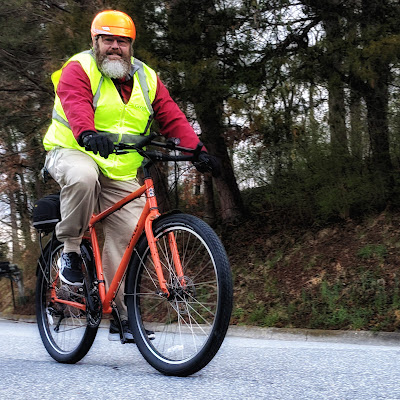 I've been having some issues with my road-style commuter bike as of late, which has been down for maintenance more than it has been up and running.  After giving it some serious thought and consideration I started to realize that it was the wrong bike for my route.

With all the curbs, greenways, potholes, and almost constant construction at work, despite being on asphalt the entire commute, my route was closer to off-road than on-road.

A road bike was not going to work.  What I really needed was a super reliable rugged off-roader as my daily ride.

So armed with this new theory I headed off to a local bike shop, Carolina Pedal Works, and consulted the experts.  They recommended that I look at the Surly line of bikes, as they are known for being rugged and dependable.  I settled on the Surly Ogre model, and put one on order.

Last night I picked up the bike.  It looks like this: 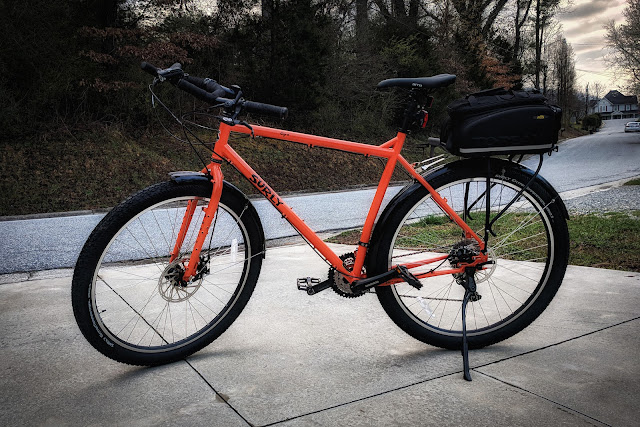 This bike is a real BBR - a big beefy ride.  Super wide tires, solid metal frame, and plenty of space to mount the extras one needs for commuting:  racks, panniers and a trunk bag for carrying spare tubes and rain gear, fenders, kick stand, safety lights.  It even sports a custom paint job.

I didn't like the colour options the bike had from the factory (black, or a crappy brown), so I had the shop powder coat it with an awesome orange.  I've always wanted a colourful bike, and now I have one!

I gave this bike a test run on todays commute, and it performed better than I expected it would.  A comfortable ride, and a great hill climber.

This bike should serve my needs as a commuter over the next few years, and allow me to handle pretty much any condition that North Carolina can throw my way.

Now, its time to hit the road! 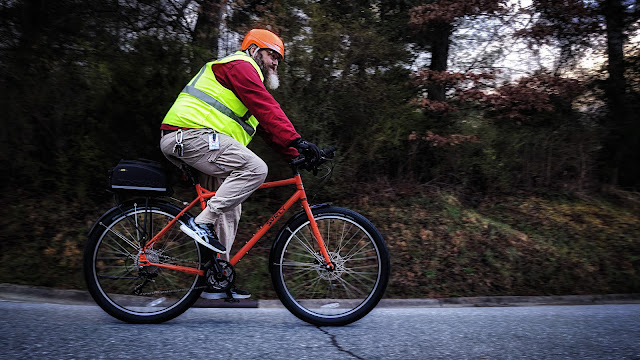 I want to give a special shout out to Kurt at Carolina Pedal Works who patiently worked with me to get me the exact right bike to fit my needs.  If you have any bike needs, I highly recommend this shop.    Two thumbs up!
Posted by Dave DeBaeremaeker at 9:49 PM