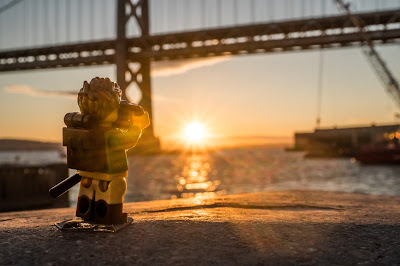 I was recently in San Francisco on a work trip. One morning I was walking along the shore near the Bay Bridge and I took this shot.

You may also notice that, if I may say so myself, it isn't a super awesome shot.  The more astute among you may now ask yourself why I am showing you this image.

I am glad you asked.

So the day I took this shot, it was bright, sunny, but rather windy.  LEGO minifigs are rather light, so when I set this up my minifig blew over a lot.  Suddenly I heard from behind me "Hey, do you want a piece of tape?".

I thought to myself "yes, yes I do.", then I turned around, saw the person looked relatively normal, and said out loud "Yes, yes I do... thanks!".

So the fellow gave me a piece of gaffer tape.  If you look closely in the image you can see the minifig is standing on the tape.  I took the shot, and all was well.

Then he said "I don't mind helping you out, because you don't look like you have a camera gun."

"Um... a camera gun?" I replied, with a curious lilt to my voice, cause what the heck?

"Well, some times people hide guns in their cameras.  I don't like them, but you seem like a good person."

How eccentric, I thought to myself... but I've heard crazier theories (there is a Trump in the Whitehouse after all, so all the crazies are out of the woods at this point).   He asked where I was from, so I said "North Carolina"... but then I tossed in, as a disarming tactic "... but I am really from Canada."

He seemed to like this, and mentioned how much he liked the queen... and how glad he was that Prince Harry abdicated the throne.

It was at this point I realized this fellow was a very polite, very nice, high functioning, lunatic.

Clearly off his nut.

At this point I tried to extricate myself from the conversaition, but I am not very good at social graces, and I didn't want to be rude, so it took a while... along the way I heard some more gems.

"Sergey Brin tried to kill me, but I am OK with that, cause he gave me 38 million dollars."

"Facebook, Amazon, Google, and all those guys have decided that each company will only last 4 years so everyone can get a chance at being on top"

"Google, Facebook and those guys are moving to Israel, near the Syrian border, to start something called Silicon Mountain. You just watch, it is gonna happen!"

Silicon mountain actually featured heavily in his stream of crazy consciousness that spewed from his mouth.

So I eventually found a way to move on politely, but before I did I shook his hand and got his name, which is Scott. Then I walked away thinking that I just had the craziest, but most entertaining conversation I've had in a long time... and with someone who appreciates toy photography to boot.

San Francisco is a heck of a town.
Posted by Dave DeBaeremaeker at 8:09 PM