A Trip To The Utah Toy Photo Safari

A couple weeks ago I went to Utah to attend a Toy Photography Safari.

Now, you may ask yourself what the heck a Toy Photography Safari is.  Luckily I have an answer.

It is when a passel of toy photographers all meet up in the same place and time, along with our various toy boxes, and have a creative smorgasborg in an interesting place.

This years Safari was held in Utah, and I attended it.  This is why I opened this blog with "I went to Utah to attend a Toy Photo Safari".  Make sense?

The Safari was held from a Thursday to a Sunday, but I decided to make a week of it.

This is the much abridged story of that week.  Hold on to your butts. 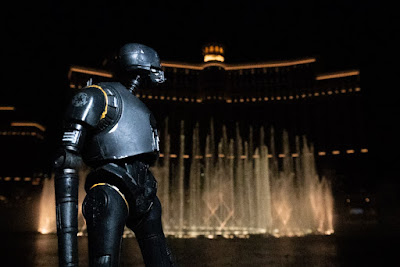 On Sunday I flew into Las Vegas, for that is the most convenient airport, and spent a couple days, mainly walking around the strip, and visiting a couple toy stores in the area.

On the second evening I headed over to the Bellagio Fountains to see if I could get some interesting photos of K-2SO in front of the fountain.

The time in Vegas was OK, but it confirms that I really don't like Vegas, especially at night - too many people with too much time on their hands.

Luckily the next day I was heading out to the desert for a few days of solo Dave time.  So early Tuesday morning I rented a car - a Mustang convertible - and headed over to the Valley of Fire.

I spent the morning hiking along some trails, taking some toy photos in box canyons. 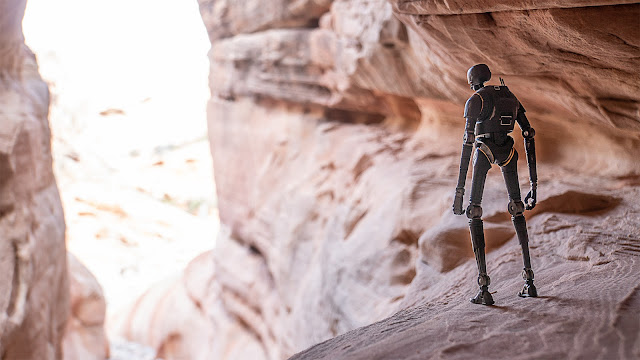 I also spent some time checking out the amazing views. 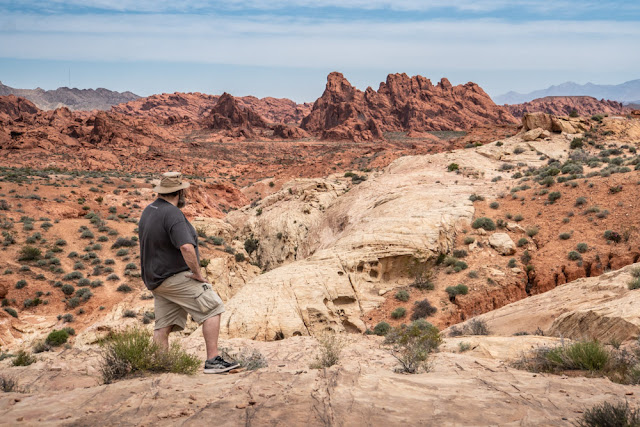 In the afternoon I put the top down and drove to St. George Utah, where I promptly got dehydration sickness.

(not pictured, the vomiting).

So one lesson I quickly learned was that it is surprisingly easy to get dehydrated in the desert.  I mean, its pretty obvious in theory, and I bought extra liquid for that exact reason, but I clearly didn't drink enough (driving 2 hours with the top down in the sun likely didn't help).

Long story short, I spend the evening dumping as much liquids (mostly water with some gatorade from time to time), down my gullet.  By the next morning I started feeling better, however I decided to skip my plans (visiting Zion National Park) and decided to catch a movie (in sweet blessed air conditioning), then explore the local parks near St. George.

So the movie I saw was Shazam, which was decidedly decent.  Then I headed over to Snow Canyon State Park. 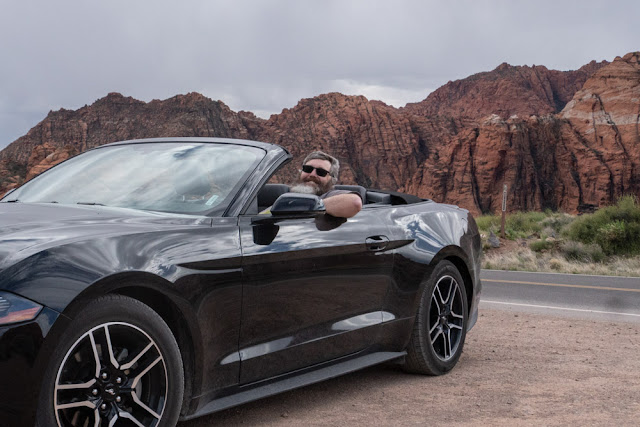 Snow Canyon State Park is a simple canyon with a lot of potential.  It has a crapton of sand, and a lot of rocks.  I decided to climb up on a rock and hang out.

Specifically, this rock, with this view: 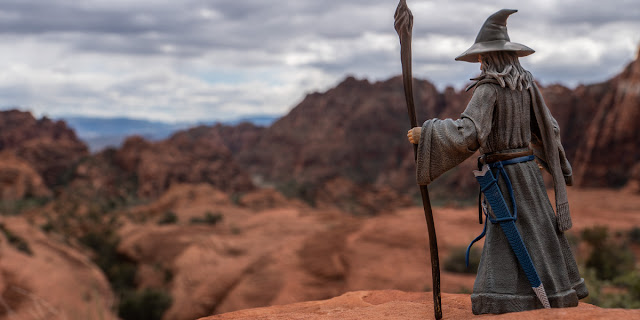 The desert is an interesting place that defied my expectations.  I expected hot, dry, sand.  I got dry, but I also got cool.  I also got rain. Rain y'all.  I gotta say, rain in the desert was awesome.

I drove thru the canyon a couple times (it was only a few miles long), and checked out all the views it had to offer.

I called it an early night.

The next day I went to Grafton Ghost Town.  This is a surprisingly well maintained town that used to be home to a bunch of Mormon settlers back in the 1800s.  Now it's run by the local historical society.  The drive in was awesome tho, and well worth the trip. 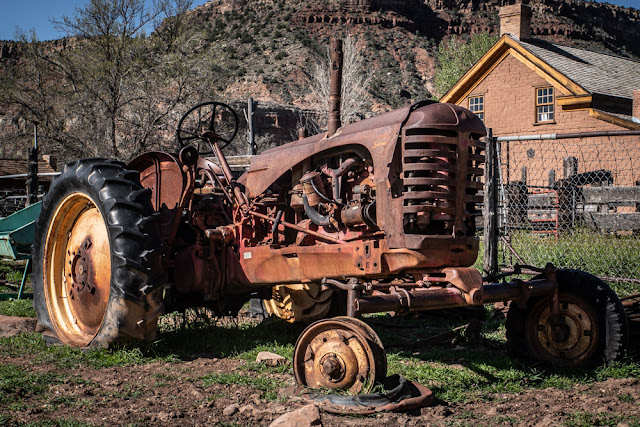 After the ghost town I headed over to start my time at the Toy Photo Safari.

Now, I am a horrible blogger and forgot to take a lot of non-toy photos for the rest of the week.  Fortunately, the Safari basically went to the same places... Snow Canyon, Grafton Ghost Town... so if you want to know what it was like, just look at the above images, close your eyes, and imagine the same scenes but with 25 toy photographers also in the scene.

I can show you some of the images I took, like this one at Grafton Ghost town: 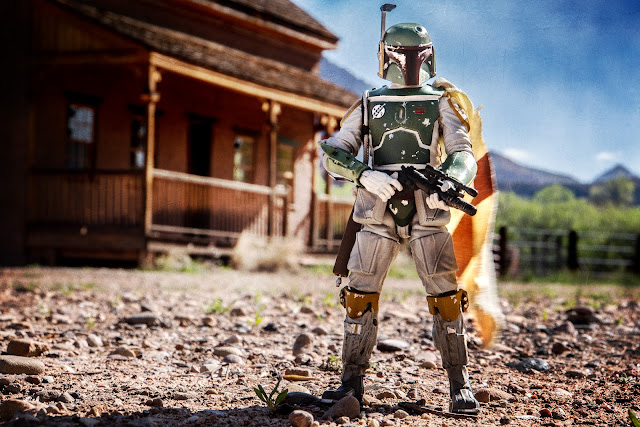 Raphael the Teenage Mutant Ninja Turtle in a waterfall: 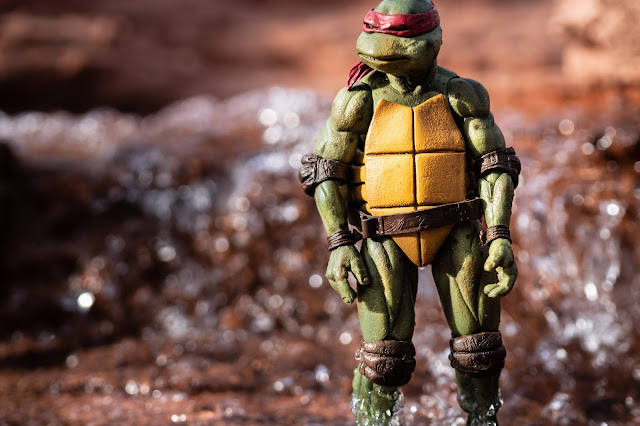 Don't worry tho, like Raphael, I stayed hydrated for the rest of the weekend. 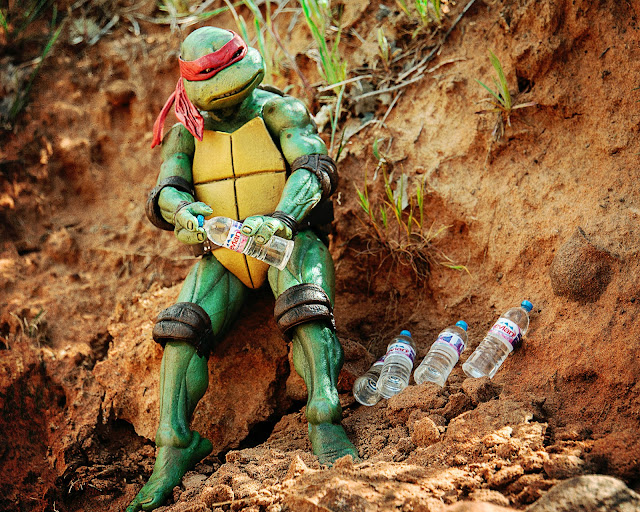 On Sunday I drove back to Vegas, and Monday I flew home.

Thus ends this rambling tome of the time I went to Utah for a Toy Photo Safari.
Posted by Dave DeBaeremaeker at 8:29 PM

nice place! glad you had a good time

To bad you got sick, but I'm glad you figured it out and rested. I'm not crazy about Vegas, either. I do like the lights and distractions, but not all the people.

That is super, m'man!! Sorry about the illness, but looks like otherwise you had a spectacular time!!

Too cool in the convertible. You gotta get yourself one.

Thanks for the report. Sounds like you had fun.