Winging It: The Adventures Of Indiana Frog: The Big Ball Edition

The first thing I wanted to do in creating a "round rock chasing Indy through the ancient temple access tunnel"diorama in which to make an image with my Kermit The Frog/Indiana Jones hybrid action figure, was to create the big rolling rock.

I started with a pair of  5" hemispheres of foam I bought an Michaels before the pandemic pandemic'd.  They have been sitting in a drawer ever since.  Not any more!

I started by glueing the two hemispheres together using white glue: 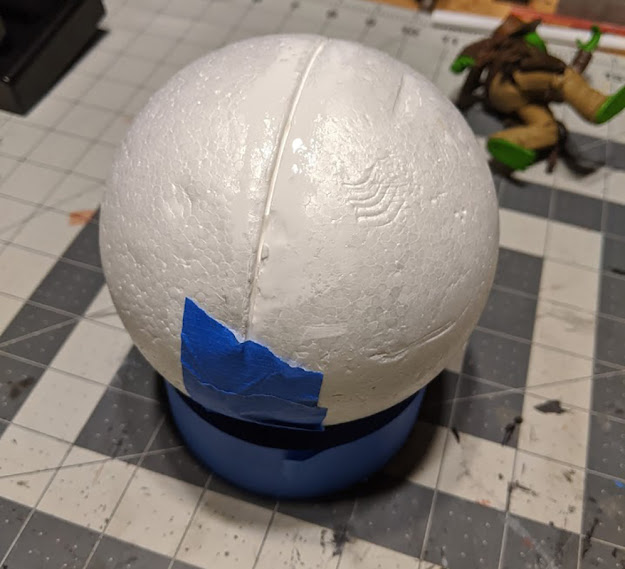 I used masking tape for two reasons.  The first was to hold the sides together while the glue set.  The second was to act as a barrier. The glue I used, Eileens Tacky glue, tends to drip a bit, especially when a lot is applied.  The spheres are not perfectly formed, so there are some gaps, so I added extra glue to fill in those gaps as well as to get more strength.  The masking tape keeps this glue from dripping out of the bottom.

For most dioramas I've made in the past (which isn't a lot, to be fair), I used extruded polystyrene - the stuff they use for insulation foam board.  That stuff can be carved, and textures applied by scrunching up some tin foil and pressing it into the foam.  I have made many a stoney looking object this way.

The spheres I have here are made out of the much less useful expanded polystyrene foam - its the stuff you get as packaging for electronics - the stuff that becomes little balls of hate when its cut, and gets stuck on you by static electricity, getting everywhere, and making you hate all things.  It is like the demon spawn big brother of glitter.  In short, it's shit, and a pain in the ass to work with.  Its biggest sin is that it won't take a texture.
I am going to have to come up with another way to get looking like a stone.

I pulled another trick I've learned - drywall putty.  I slathered it on to make a stone texture on the outside of the ball. 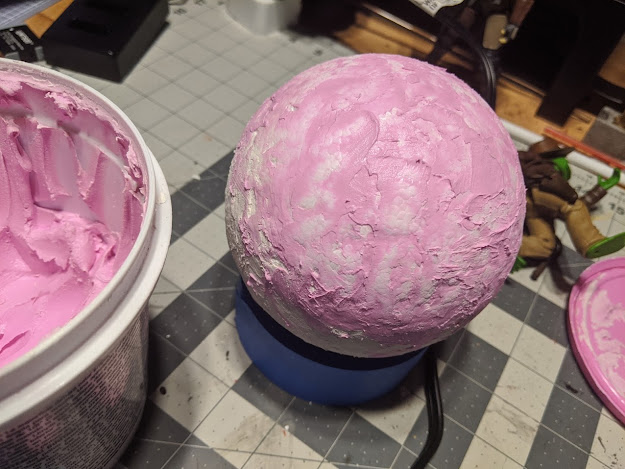 One benefit of the putty is that it filled in the seam along the equator of the ball, making it look like a solid chunk of stone, instead of two solid chunk of stones. I was (mostly) successful at this.  There is some seam left, but I should be able to keep that out of frame  (movie magic is very forgiving for things not directly framed in camera)
Once the pall was puttied up, and dried completely (I left it overnight), I covered it in a coating of black paint and Mod Podge.  This should seal everything in, and leave me with a nice base coat to start my paint job. 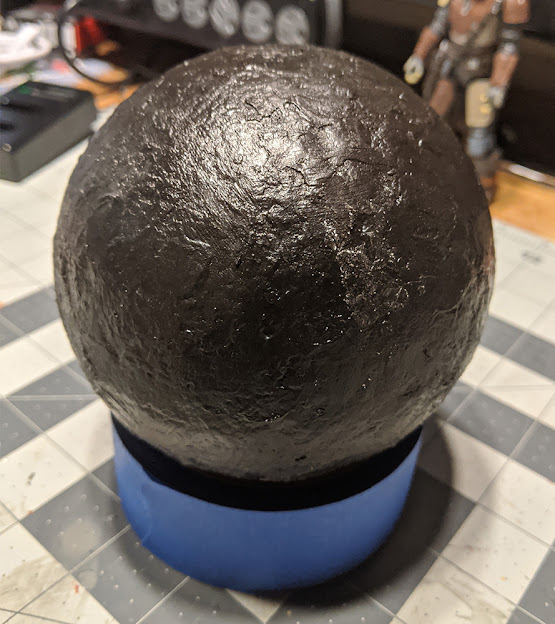 Since I am winging this whole thing, I really don't know what colours I want to use to paint this stone.  I imagine I'll have a better idea once the rest of the diorama is complete.  So for now I am putting the ball aside. and will move on to building the temple access tunnel.

But that is an adventure for another day.
Posted by Dave DeBaeremaeker at 9:31 PM