The Salty Death Of My Trusty Camera

This week was a tragic week at Studio Dave, for it saw the lost of a trusted friends... my beloved camera, a Sony a6500 camera body with a 18-200mm lens.

It all started on a trip to the coast of North Carolina to get some much needed breaks from the work from home world that is all our lives recently.  Pandemics are dumb, and I think we should stop having them, but it's not my call, so I'm making the best of it.

This is actually the second attempt at a beach trip this year.  The first was preempted by Hurricane Isaias back in the first of August.  I was so excited to actually go somewhere I made a 1/12 scale beach chair for Deadpool to sit in (as one does) for our first trip.  The chair looks like this: 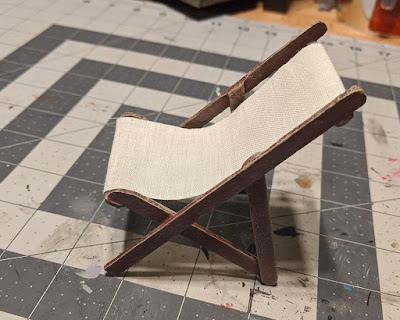 That chair has been sitting in my camera bag for almost two months. So when I got to the beach I was super excited to finally get to use the chair in a shot.  I set up on the beach, put Deadpool in his chair, added some props, and clicked away happy as a clam.

My wife was nearby and said "I think this wave is gonna get close".  I looked up and saw the wave approach, but stop just before my setup, so I said "Nah, it's fine."

I looked up to see a rogue wave crash into my setup and bury Deadpool, the chair, and my camera in nice salty ocean water.

I pulled it up right away, but it was too late. The camera was drenched.  Most of the controls were full of beach funk and didn't work anymore. The lens no longer focused, or showed its f/stop.  Oops.

The camera is a trooper tho, and the last shot it took before the wave hit happened to be the exact shot I was looking for. Thanks little buddy.  That shot, polished up in Photoshop, looks like this: 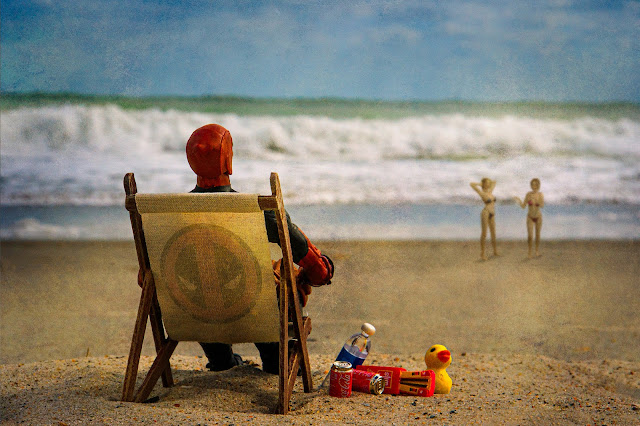 When I got back to the beach house I looked at things more closely.  Swapping lenses with my wife's camera (which is identical) showed that indeed both the lens and the camera body were both dying. Sometimes the camera would give errors, sometimes it would do nothing.  I then switched it to automatic mode and I was able to take a photo. Then I hit the shutter  again and it went into burst mode, and wouldn't stop until I hit the power button. It could no longer be focused, especially if the lens was zoomed out.
Clearly my camera was now possessed by a salt demon.

I could take a photo, and if I happened to put a figure in the exact right spot where the focus was when it died I could get a clean image. It's a very limited set of options, but it has one more dying gasp of art left in it.

Thats when I had the idea to give my camera one last send off and try to capture the cause of its death in some sort of poetic finale.  So I went back down to the beach, with my wife in tow (as external documentarian), and set up Deadpool in the surf, and waited for a nice large wave to roll in.  This was the last thing my camera saw before it died completely:

After this it showed an "overheated" message on the back screen, (ironic given it was covered in water) then went black for the last time.

Thanks little buddy.  You and I made some great art, and had some great adventures together.  You will be missed.

In other exciting news, my new camera arrives in two days.

Posted by Dave DeBaeremaeker at 8:54 PM No comments: