Photography Scavenger Hunt Round 30: Pantone Color Of The Year 2021

This is a behind the scenes of my "Pantone Color Of The Year 2021" shot for the 30th round of the Photography Scavenger Hunt.

This is one of the most unique "words" for any hunt I've been in.  First of all Pantone had not even announced the color yet when the list was published.  Second, when they did release it, they had two colors - a grey and a yellow.  The hunt has had a colour almost every round, but never two in one category.

This was the first word I shot this round.  In fact I had it completed within 24 hours of the list being published.  A bit funny that it was the last one released this round, but thats how the cookie crumbles.

My ideas started floating around posters, and Bob Ross style paintings.  I couldn't really nail it down in my head.  Eventually I used the whole experience of how this "word" was revealed to me and put it into a picture.  I imagined a scene where Pantone put a poster of 2020s colour (a blue shade) up on a wall, which faded over the year, and a new poster was being put up over top of it to announce 2021s colours.

I decided to keep the idea of Bob Ross putting the poster up.  I imagined the poster to be large size, more like a small billboard.  In one of the seasons of Bob's show The Joy Of Painting, the intro montage is Bob with a paint roller painting in a scene.  I figured that paint roller may be a good way for him to be attaching the poster to the wall.

All I needed was a wall, a poster, a paint roller on a stick, and a Bob Ross.

Luckily I had an 8" Bob Ross figure in a box (doesn't everyone?) so I grabbed him from the shelf.  I made two posters in Photoshop and printed them out at 8x10 on my printer.   I then fashioned a Bob Ross sized paint roller out of wire, string, white felt, and a chop stick.  Finally I made a wall out of a 16x20 piece of foam core, and some craft paint.

I glued the 2020 poster to the wall, and aged it up. I love aging things, and I enjoyed it much.  I then glued the 2021 poster on top of it, leaving one corner unattached and curled. 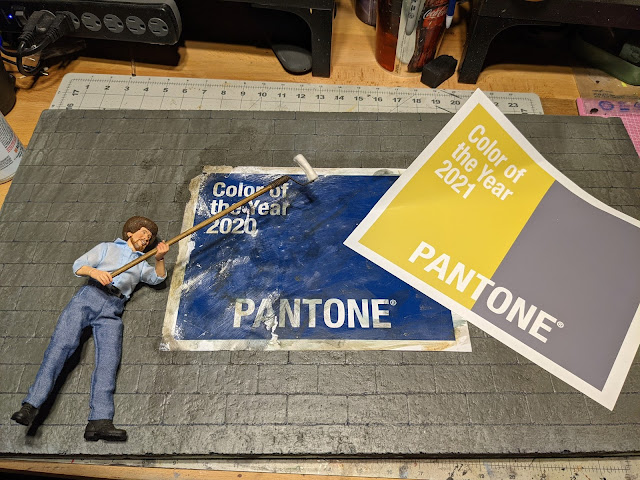 After that it was a matter of setting it all up and shooting it.  I used a Lume Cube mounted on a gooseneck attached to a Platypod to light the scene. 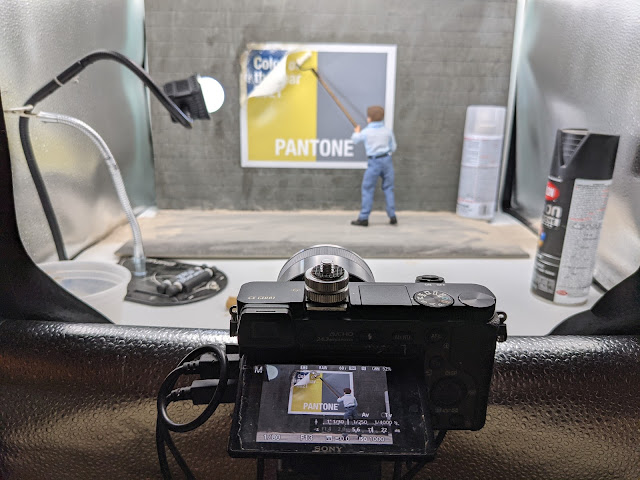 Post processing was a few simple textures to add a bit more character, and the result is what you see here. 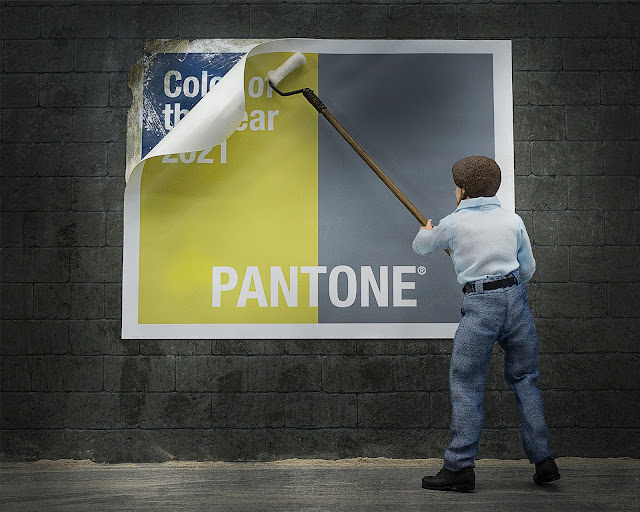 Posted by Dave DeBaeremaeker at 11:50 AM