Bears Across America: Garden Of The Gods 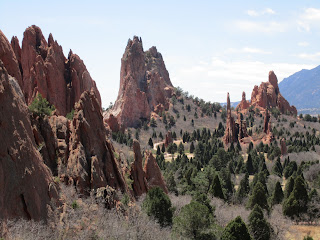 April  30th to May 2nd.  Our epic road trip adventure to explore the wild west of America has brought us to Colorado Springs Colorado.  We are here to visit some friends that we met in Belgium when we were on assignment from work there in the summer of 2008 from Canada who now live in the US (cause who doesn't have friends they met in a foreign country while on work assignment from their home country, who they visit  while living in another foreign country in which they currently inhabit? :) 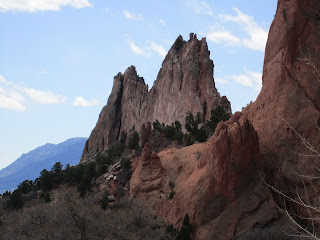 Colorado Springs is nestled on the eastern side of the Rockies, so it quickly becomes a remote region with really beautiful landscape.  The peaks of the Rockies dominate the skyline to the west.  One of the most spectacular landmarks is a park called the Garden Of The Gods.

The Garden Of The Gods is a series of rock formations left over after soil and lighter rock have eroded and leaving behind denser rock, some of which is in spectacular spires.

The most striking example of this is Balance Rock, where the rocks have eroded such that a large rock is left balancing on other rocks.  I tried to push it over, but was unsuccessful. 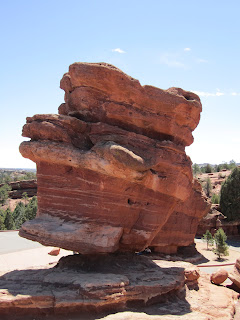 I have also been doing some geocaching around the area.  There is one interesting type of hide that I have not seen before.  The cache container is a metal cover plate (like from a light switch or power outlet but without the holes).  On the back of the plate is attached a ziplock bag to contain the log.  Magnets are glued onto the back of the plate, and the whole thing is left on a metal electrical box on the side of the road.  It looks amazingly official until its picked up.  I grabbed 7 caches in the rather long series (at least one per letter of the alphabet) before I ran out of time. Awesome good times.

We will have spent 3 days in Colorado, and then we are turning the car eastward tomorrow to check out the great American plain states.
Posted by Dave DeBaeremaeker at 6:00 PM