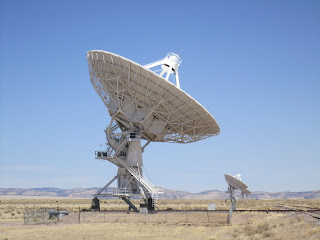 New Mexico is rich in history.  It has everything from ancient cultures to modern scientific endeavors.  Billy The Kid lived here, and before that Billy the Infant.

Today we took a drive into the New Mexico country side to check out one of the more modern marvels the state has to offer: The Very Large Array radio telescope.

The telescope is a series of satellite dishes arranged in 3 lines.  They all work together to explore the far reaches of space by detecting radio waves with amazing fidelity and accuracy.  Its also where parts of the movie Contact were filmed, as well as a Bon Jovi video.  Tho I have it on good authority that Jon Bon Jovi had no influence on the science.

The VLA is out in what Websters would define as a textbook definition of "the middle of nowhere".  It is 2 hours outside of Albuquerque, and 60 miles from any form of civilization. Its also at 7000ft elevation, which makes it the highest place I have ever stood on earth. It does offer some amazing views of the mountains and high country of New Mexico. 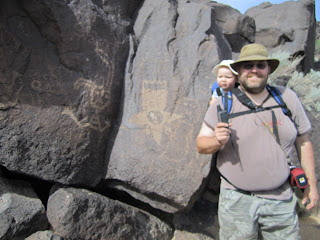 After the VLA we headed back to Albuquerque to check out Petroglyphs National Monument, which is really just a state park.  The Petroglyphs are a form of Pueblo Graffiti - images and artwork carved into the rock by ancient North American civilizations, most like the Pueblo indians.

There are over 25,000 'glyphs in the park, and we saw only a small handfull of them before we moved on to exploring the old downtown area of Albuquerque called Old Town.

Tomorrow we will continue our adventures west and drive to Flagstaff AZ, where we will spend the next 3 days exploring, adventuring, vacationing, relaxing, and eating.  Stay tuned.

Oh, before I go, I gotta say that the best thing about the day was that I finally got to take that left turn that Bugs Bunny never did:

Email ThisBlogThis!Share to TwitterShare to FacebookShare to Pinterest
Labels: Bears Across America, Travel