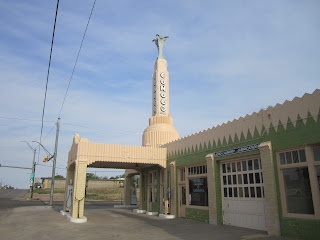 April 20th saw the fifth, and so far the most interesting day of our family adventure to head west for fame, fortune, and vacation.

We spent the night in Shamrock, Texas in an Econolodge located right on the famous Route 66.

Our first stop of the day was Conoco Towers, an old gas station. If it looks familiar to you, you shouldn't be surprised. It served as the inspiration for Ramones Body Shop in Radiator Springs... still confused?  It was the town in the movie Cars. 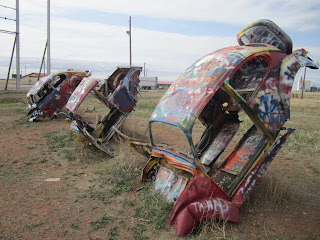 We drove along the original Route 66 for a while, checking out some of the history surrounding the Mother Road: old cafes, interesting milestones (like the half way point between LA and Chicago), scary nutball religious iconery, and eventually visited two car ranches.

Car ranches. Ya know, ranches for cars. Places where cars are born and bred (where do you think they come from anyway?). Specifically Volkswagen Beatles, and Cadillacs. 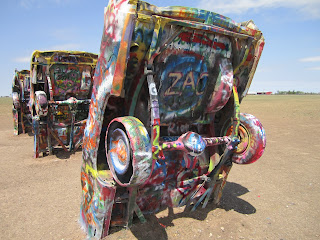 What is a car ranch?   Well, its where a series of cars are half buried hood down in a row.  People are encouraged to spray paint the cars when they come visit.  The Bug Ranch had 4 cars, and Cadillac Ranch, never to be outdone by lesser vehicles, had 10.  I signed my name on cars in both places.

After the ranches (and subsequently after lunch) we headed towards (and eventually crossed) the New Mexico state line.  I found several caches right at the state line.  There wasn't anything overly remarkable about the caches itself (aside from my first experience with desert conditions), however after I logged the find I was emailed by the cache owner who informed me that he was pretty sure that he saw me hunting for one of his caches as he drove by.  Small world :) 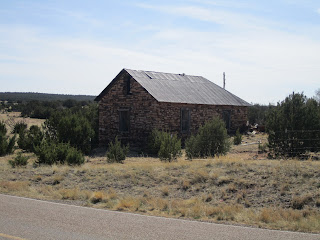 Further on into New Mexico we took another caching detour and ended up in a small ghost town - a total of 3 houses, and a couple run down foundations.

It is really remarkable how fast the landscape changes.  It seems like it takes only minutes to go from the flat plains of west Texas and eastern New Mexico to mountains and high hills.  It really is beautiful country.

Zeke is starting to catch a cold, but otherwise he has been an absolute trooper, and has learned to entertain himself in his car seat.

Tomorrow we are sticking around New Mexico, tho our exact plans remain undecided.  Tune in next time to hear me say "hey, stop following me!"... Same bear time, same bear channel. 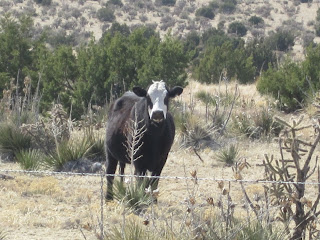 Creepy image for the day:  New Mexicow is watching you!
Posted by Dave DeBaeremaeker at 5:00 PM