Tuesday April 19: Day 4 of the trip to the American wild west.  I have packed up a wife, 18 month old, a puppy, and my geocaching gear into our mini-van and am heading westward.  Ultimate destination?  The Grand Canyon.  Todays goal?  Conquer Oklahoma, finding some geocaches along the way 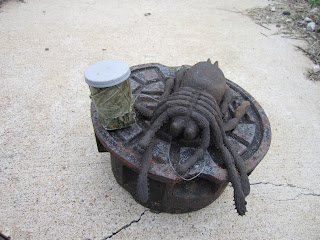 We started the day in Russellville Arkansas where we grabbed a few geocaches before skipping town. The notable one being a cache where the container is magentically attached to the bottom of a water main lid.  When the lid is lifted, the cache comes up, along with a rubber spider attached via fishing line.  Spooky.

We ate lunch in Shawnee OK, and then headed to Oklahoma City to check out the Oklahoma City Bombing Memorial.  After than we headed for the Texas border.

Along the way we took a detour to snag a cache at an old gas station on Route 66 that was run by a woman who used to let people stay with her that had no money, or who's car broke down.  She was known as the mother of the Mother Road.  Her legacy still stands here. 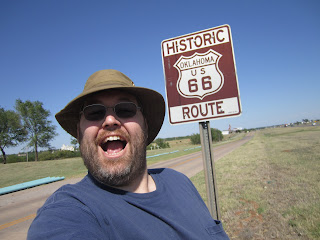 We spent the night in Shamrock TX.  Tomorrow looks promising as we explore some more of Route 66 and all it has to offer.  Stay tuned to see how we get our kicks on Route 66.
Posted by Dave DeBaeremaeker at 6:00 AM