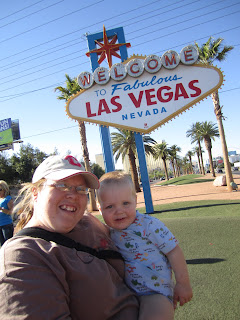 April 27, 2011.  The Bears Across America whirlwind tour out west has brought us to our most western point:  Las Vegas Nevada.

Las Vegas is too large to be explored just passing by, so we spent an entire day exploring the Las Vegas Strip, where all the famous casinos and famous landmarks are located.

Our first stop in Vegas was the famous Las Vegas sign which anchors the southern end of the strip (it also doubles as a virtual cache).

We walked the strip in the morning, checking out some of the casinos and the other sights.  There is a lot of cool things on the strip - way to many things to comment on in a blog post, so I'll hit some of the highlights: 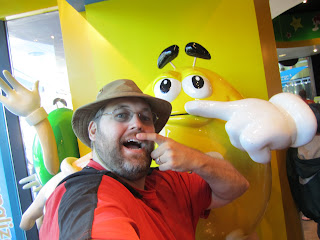 There is a lot of shopping on the strip.  One of the best stores we visited was the M&M Store - 4 floors of all things M&Ms... a tower of deliciousness that melts in your mouth, not in your hands.

I have been doing more caching on this trip than I expected, so I was able to hit a milestone on the Las Vegas strip.  I picked the virtual at the M&M shop as my 500th find. It was great deal of fun, and a sweet (literally, figuratively) way to celebrate this milestone. 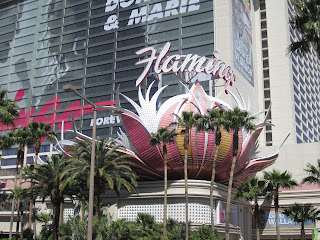 We stayed at the Flamingo Hotel and Casino, mainly due to it being dog friendly, on the strip, and cheap.  It was still a very nice hotel, one of the nicer ones we've stayed at this trip, and it is truly dog friendly.

I was not prepared for the size of the place.  According to the clerk at the check-in counter there are 3600+ rooms in the hotel.  The bottom two floors contain a casino, food courts, and many shops.

The hotel also has a really nice courtyard with live flamingos and other birds, pools, fountains, and outdoor patios. 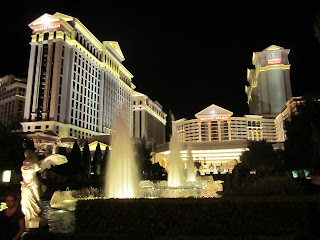 The strip at night is much more impressive than during the day.  The number of lights is astounding. No wonder they build Hoover Dam so close :)

Every casino has its own theme and style, and all are unique.  Some are fancier, some are not.   Almost all have some sort of fountain, some sort of food, shopping, and a built in hotel.

You may ask if we gambled, and the answer is yes.  Both Debbie and I put a US dollar (98 cents Canadian) into a slot machine.  We didn't win. 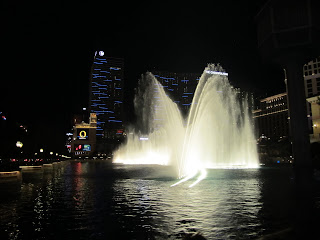 The Bellagio, a casino in the middle of the strip, has an impressive fountain display every 15 minutes during the evening.  It is synchronized to music, and well worth checking out.

Zeke loved the fountains.  He was mesmerized during both shows that we saw.    He really enjoyed most of the sights and sounds of the strip.

It is now time to head east again, but where are we going?  What is next for the Bears?  Stay tuned!
Posted by Dave DeBaeremaeker at 6:00 PM